It’s strange how things just happen. The ‘chance events’ which occur and sometimes lead us off in new directions of thought or action. Last week after finishing my post with thoughts on helping my mother-in-law prepare to leave the family home, and the transient nature of most gardens, an out of the blue phone call heralded the arrival at our home, with only a couple of hours’ notice, of my first employer who was in the area on a short break. A quick tidy up was called for, and this included a whizz round our minimal lawns, with our rechargeable Li-ion lawnmower. Having nearly finished an area down to a gateway into an old pasture field, my eye was caught by a small moth feeding from a buttercup, in the unmown grass between immature shrubs. I grabbed the cameras and took still and video clips, since it looked unfamiliar, and just then John arrived, with Angela. I’d introduced John to the delights and variety of moths a couple of years ago, after completing my Garden Moths DVD-ROM project, so finding he had his camera with him, we returned to find the moth still feeding, and more pictures were taken.

Over tea as we watched and photographed a Red Kite which for the first year is nesting in our wood, we discovered that the moth we’d seen was indeed a new species for Gelli, and that neither John nor I had ever seen it before. Indeed it’s the first new species of moth I’ve seen for over a year. And this after looking at moths for nearly 10 years. And as you can see, it has the lovely common name of ‘Mother Shipton’.

The following day saw Fiona and I get up early to drive to Hay-on-Wye so that I could join F’s brother-in-law, Kevin, by 9.30am for a small section of his mammoth personal journey on foot from Land’s End to John O’Groat’s. By now he has covered nearly a third of the distance, and as well as pounding the ground, he is posting a fascinating record of his progress through the UK , which you can follow at ‘Time To Walk‘, which is complete with thoughts, pictures and GPS generated trails and walk profiles, created on his lap top and uploaded every night using whatever internet access he can find (unlike myself Kevin is a technophile). The weather was kind, and initially we followed the Wye valley before cutting north west onto the ridges of hills fingering out from Wales into England along the Offa’s Dyke path. I was struck in the valley bottom by the industrial agriculture – immaculately furrowed fields of potatoes with the first shoots just poking through the ridge in places, and the deep NPK induced green of barley with the very first spikey awns appearing. Also by the complete absence of any native wildflowers, (apart from a very few along the hedgerows), and perhaps consequently almost no insects. As we left the valley, and the land became wilder and higher, we at last reached an old pasture grazed by a few steers, and studded with buttercups and Lady’s Smock and almost immediately I spotted a Wall Brown butterfly which I’ve only ever seen a  few times at Gelli. 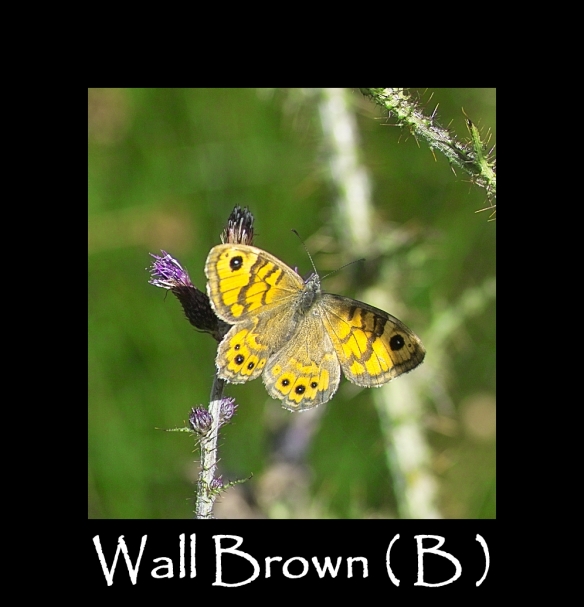 In the next field was a huge old burrled oak, which I paced at 29 feet circumference. We reckon it was probably a mature tree by the time of the English Civil War, (i.e. over 400 years old) and what a sense of history it contributed to the landscape.

Knowing that Kevin was considerably fitter than I am, I opted out after about 7 miles and F and I went on by car to Kington (his destination), to visit Hergest Croft Gardens. This was an astonishing experience, since by chance we arrived at the peak of their Azalea and Rhododendron season. We’d forgotten the history of the gardens – having alluded to the impermanance of gardens last week, this proved the exception to the rule. The vision of a great gardener planting up trees and shrubs in an empty field with huge spacings, which over a hundred years later have created vistas of towering majestic trees and mature flower filled genius now managed by the fourth generation of the Banks family. A short walk across a meadow and a plunge through a deciduous wood revealed the high point of the vision – an almost other worldly vista of 60 foot high Rhododendrons enveloping the ramrod straight trunks of mature firs and pines, in a hidden valley with its own microclimate. Spent flowers so numerous that the paths were in places thick with fallen pink blooms. If you ever get a chance to visit, do. We would put the experience in our top 3 of garden visits ever. My screen captured photos from a Camcorder really don’t do it justice. 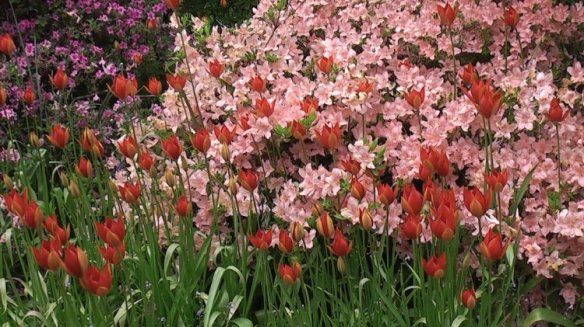 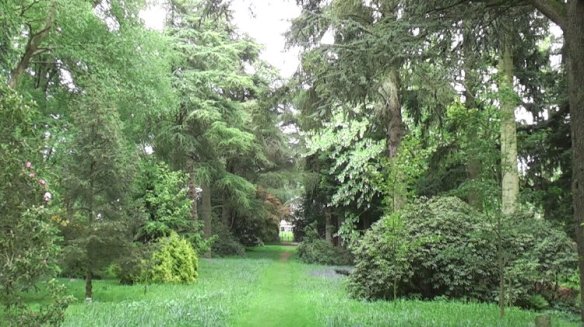 Gorgeous forest planting in the hidden valley at Hergest Croft 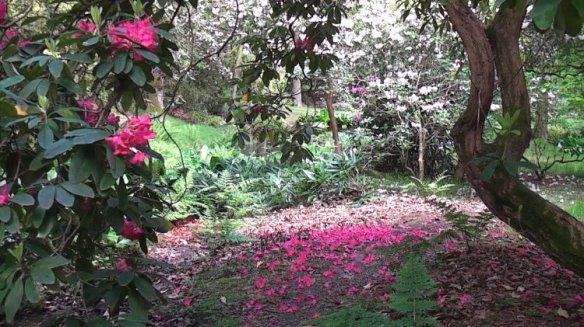 Back at home the issues of intensive industrial agriculture, the apparent need to increase by 50 % world food production by 2050, and the fastest rate of loss of species in the world’s history all preyed on my mind, whilst our own rhododendrons do their stuff, a feeble small-scale version of the Hergest Croft magnificence, but still a huge joy at this time of the year. 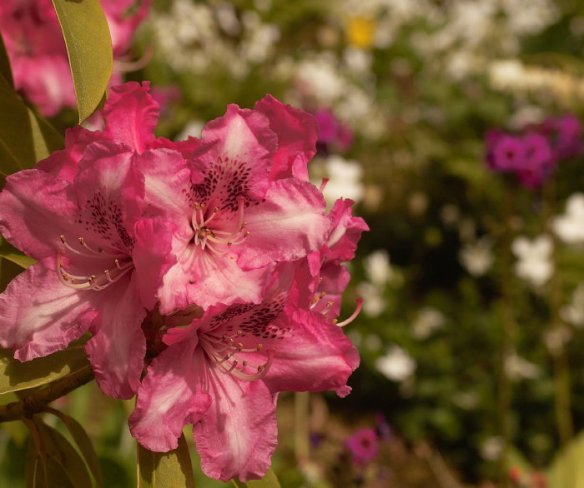 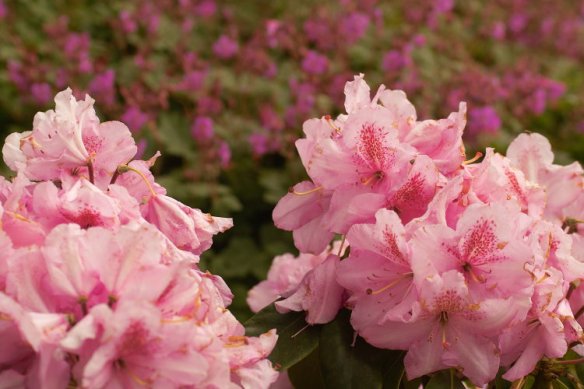 For my more serious scientific musing, I brought together both the lack of insects we’d noticed at Kew, together with the topic of UK smog this year during the prolonged anti cyclone in March/April and finally “industrial disease”, (the song of this title by Dire Straits) strangely being the first thought that popped into my head, as Kevin and I had walked between immaculate fields of monoculture last week. Googling “particulate atmospheric pollution effects on insect numbers” had me ploughing into the nether pages before finding anything of apparent relevance, or contemporary. Surely someone has studied this topic?

Eventually I found requests for papers to be submitted for a special edition of the journal ‘Atmosphere’ planned for late this year. The main editorial backdrop to the subject was the alarming and accelerating increase in human mortality in Northern European cities over the last 15 years from respiratory diseases associated with atmospheric pollution, much of which is generated by automobile use. Secondly was an article published in 2005, by a group of American human respiratory consultants, who were proposing the frequently scientifically studied fruit fly, Drosophila melangaster, as having a sufficiently similar respiratory system microbiology at a cellular level to vertebrate respiratory systems to provide a useful research model for the study of the response of vertebrate respiratory systems to “inhaled oxidative environmental challenges”.

Finally, and perhaps most intriguingly a report on the decision by the city of Seoul in South Korea to reclaim its historical green feature, the river Cheonggyencheon, which had been concreted over a few decades ago to allow a multi-lane elevated highway to bisect the city centre. The road was removed, the river opened up again, plants were established on its banks, and apart from the huge amenity value for residents, the fascinating aspect was the scientific data collected. Along the river corridor, atmospheric pollution had decreased from 74 micrograms per cubic metre to 48 mcm, bird species had increased from 6 to 36, and insect species from 15 to 192! 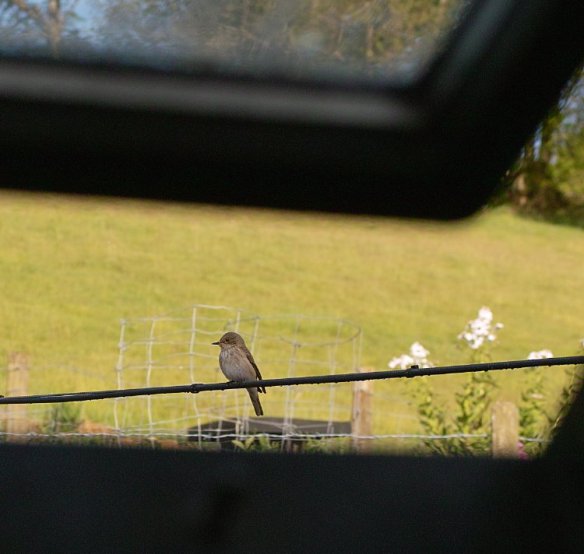 And with all the insect life about, up from Africa, the Spotted Flycatcher is the latest bird to be added to the catenary roll call

But given our own experiences of increasing insect diversity here in the relatively clean Carmarthenshire air, I’m disturbed that so little attention seems to have been paid in the past to this aspect of the air quality of our urban environments. If they’re that poor for insect life, what on earth are they doing long term for human health? Still, yet again, this is no doubt too brief and simplistic an assessment. Without the time or resources, it’s difficult to get access to more than scientific abstracts, on line. And anyway, it brings me to my final point.

Many years ago my father-in-law gave me as a Christmas present a book entitled ‘Words Fail Me’. It was a rational choice, since articulate verbal dexterity has never been my strong point, and this was brought home to me on Sunday, when to my complete surprise and delight my film ” Epiphany In Translation” was awarded the joint documentary (Europe) prize at the SBFF.

An embarrassing and completely incoherent attempt at a speech was made by me in front of a packed awards ceremony group of diners. I should have remembered Fiona’s advice.

Ah well, to misquote Jim Carey, I think, “Behind every film director, there’s a great woman…..rolling her eyes.” Heavenwards.

I must now add an important addendum: I do these posts in bits and pieces, and today for the first time I lost a chunk of text for some reason, so it’s taken longer than usual to complete. Eventually I retyped, tried to get the photos in place, and finally thought that before putting the post online I should check what the origin of the Mother Shipton name for the new moth described at the beginning of the post was. I had mentioned the moth find to Kevin the following day, and said that I took finding it as a good omen. It justifies any reader who has got thus far checking out, in view of the numerous synchronicities which seem to happen up here, not least of which can be followed by googling “Christmas wren hunting in Wales” – the event I described in my comment on the site you will get taken to, forms the basis of the opening scene of the documentary film I have just referred to.

2 thoughts on “Mother, Brother, Father and How Words Failed Me”