June began with 2 days of fabulous hot sunny weather and clear blue skies, continuing the extraordinary run from the record breaking spring of 2020 which took us through to the end of May. 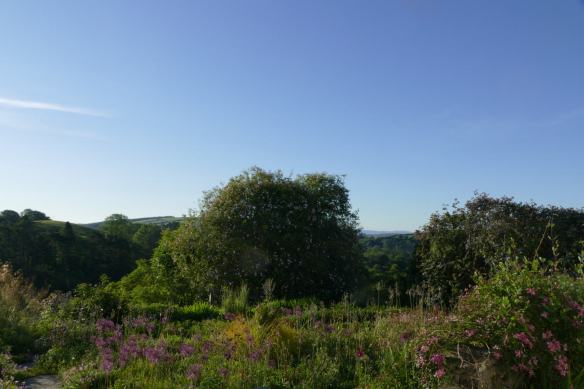 However, high cloud appeared in the evening of June 2nd, the wind swung to a Northerly direction, and by the next morning grey skies and some light rain had arrived. 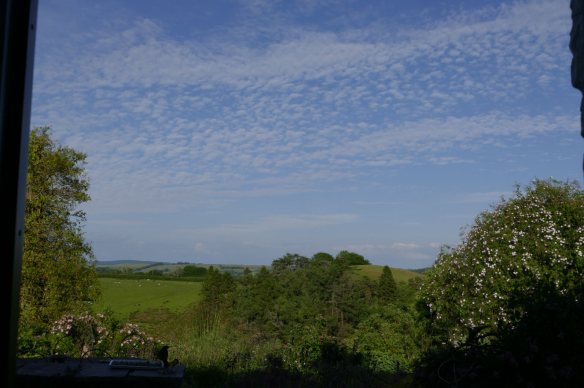 This set the scene for the next fortnight with cooler weather with some rain on most days, often quite brisk winds from the North or East and intense overnight rain of 32 mm on June 11 th, which finally removed our water worries of the last 2 months.

The garden hit a slight lull, although rambling roses were wonderful with many getting ever taller and more impressive with much less disease than in previous years.

The tyre garden path has been a huge delight with Iris and Sweet William grown from seed taking over wonderfully as the Polemonium “Lambrook Mauve” finishes. 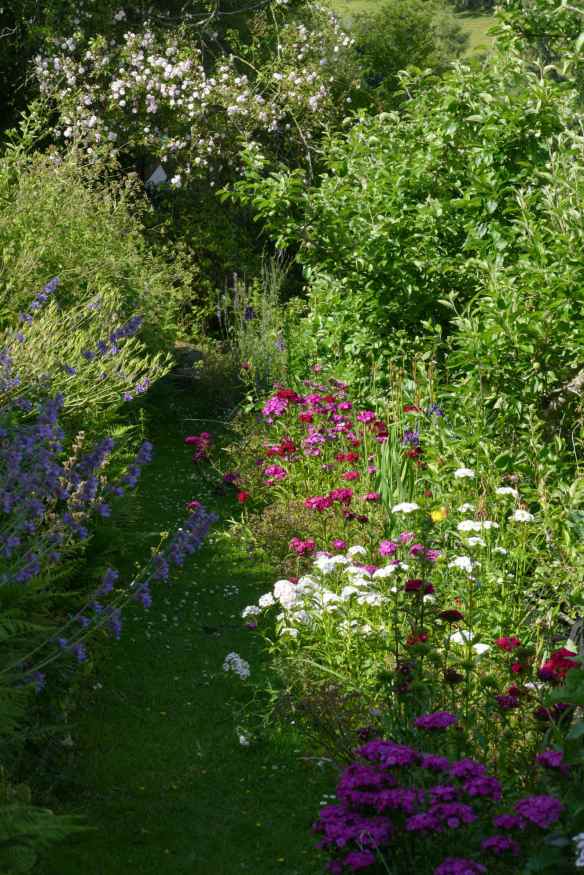 As always June sees the hay meadows reaching their peak and changing daily. 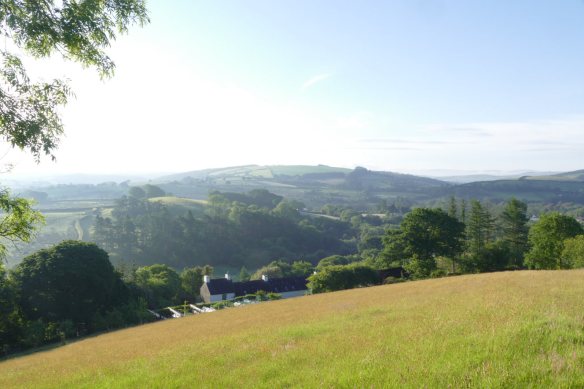 My guess is that overall flower numbers have more than doubled from last year and with the damper weather now we’re enjoying all this for longer. Seed set, and drop  should be phenomenal this year, so 2 or 3 years hence the meadow will look even more stunning! All within 10 years of starting the process of wildflower restoration work on this field which had no flowers in it at all when we began.

But it’s very difficult to capture this profusion of flowers on a grand scale with a still image on a small screen! 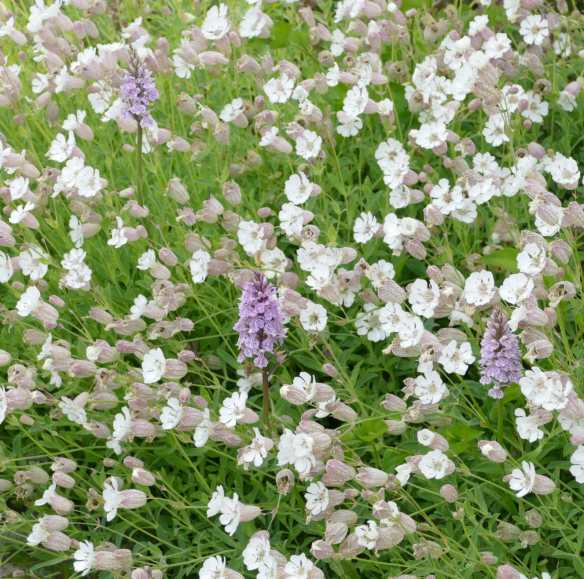 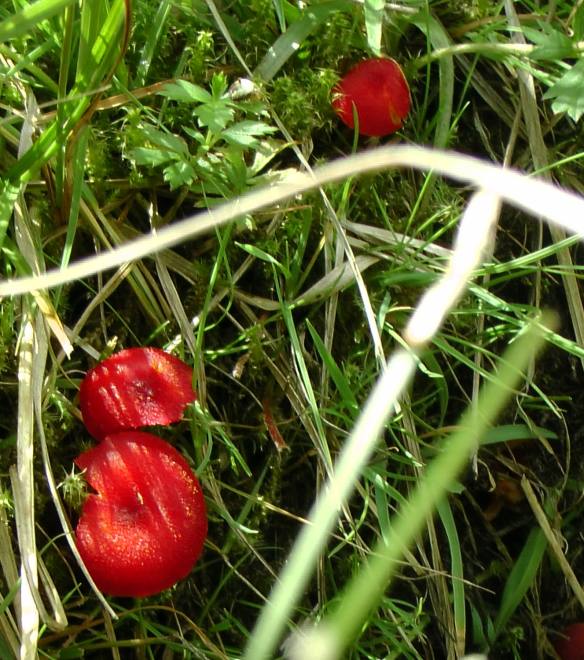 And most exciting a colourful large Ichneumenon wasp, which may turn out to be Protichneumon pisorius 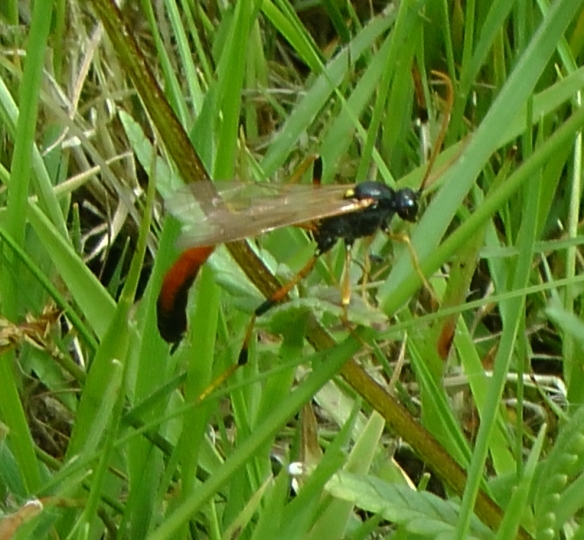 Finally some disappointment on the bee front was that the re-insulated “National” based “Metasequoia” hive once more attracted in a swarm, but these arrived just before the weather became very cool windy and wet, which is why, I presume, they only survived for a few days.

Meanwhile the butter churn hive has produced the most amazing display of drones entering and leaving the hive, typically peaking around 2 to 3 pm. Still images don’t do this justice, so I’m including 2 short video clips.

This first at 3.15 pm on June 13 th, to show the amazing scene as hundreds of drones flood the entrance on their return from a visit to the special drone congregation areas where they hoped to mate with a virgin queen. There are also quite a few smaller female worker bees still trying to get inside with pollen and nectar amidst the throng of noisy buzzy males. These returning drones are all the lucky/unlucky ones. Any that successfully mate with a queen are ripped apart by the fleeting, few second coupling and fall to the ground dying.

This second clip shows how within just a few minutes, this flood of returning males had eased off. The drones can only manage about 20 minutes of flight before returning to the hive to refuel. They’ll manage perhaps 4 or 5 such trips per day, only on suitable warm sunny afternoons during the prime swarm season from May through to early July.

Being a non intervention hive built by the bees using entirely their own wax, drone numbers will be much higher in this butter churn colony than in a conventional managed honey bee hive. I’ve been unable to find any other videos on line witnessing such a spectacular drone return. Also if you look closely you’ll see the drones leaving, pause to wipe their large eyes in characteristic fashion, before take off. 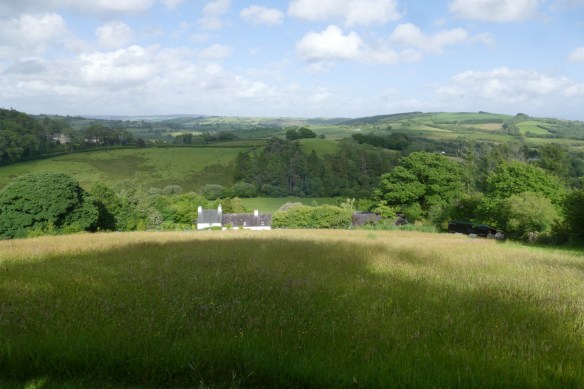 At last on June 21 st the weather forecasts all predicted a high pressure system, temperatures in the high twenties and 3 days at least with no rain. 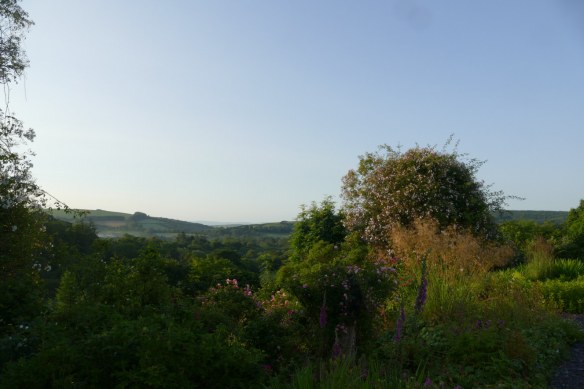 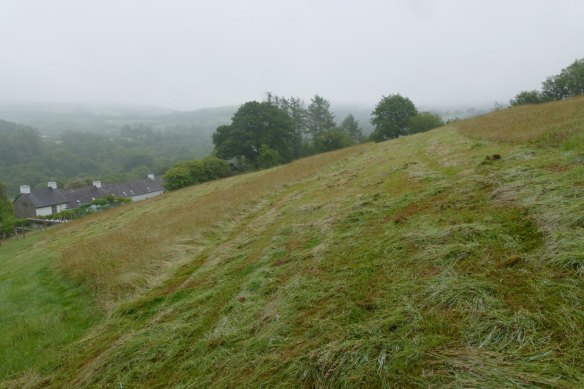 So I cut some more hay, only for 3 mm of completely unforecast rain to fall overnight. The morning scene below didn’t look at all promising, but my midday, the sun at last appeared to save us.

Together with initially brisk winds and searing temperatures it meant we could bring all the excellent hay we’d cut in, before the weather turned again with thunderstorms arriving the same night that the hay was bagged up. 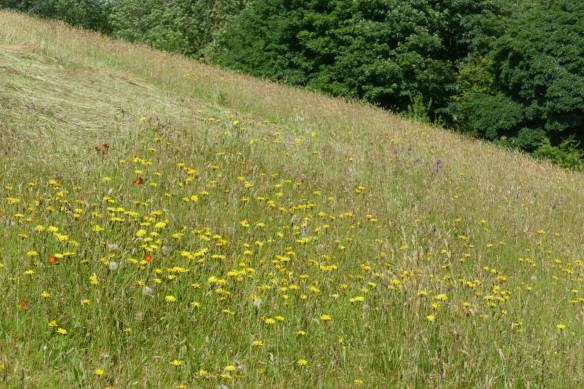 This year I cut, for this second phase, 3 horizontal swathes across the field, which has given the huge numbers of grasshoppers and meadow butterflies plenty of uncut grass to continue to use.

This meadow is now becoming so appealing and flower rich, that it’s a real wrench to cut any for hay! 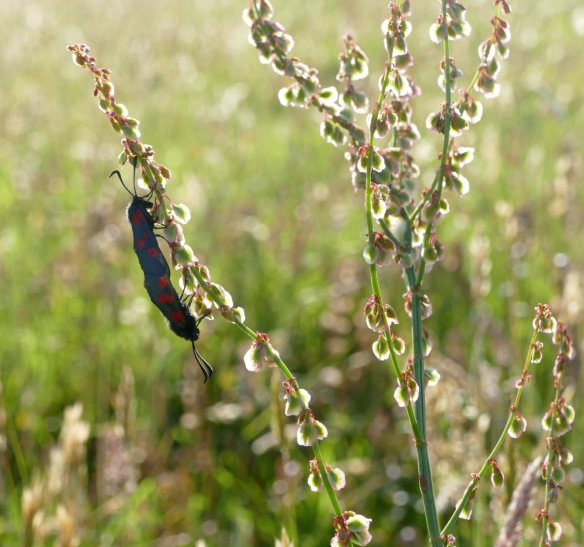 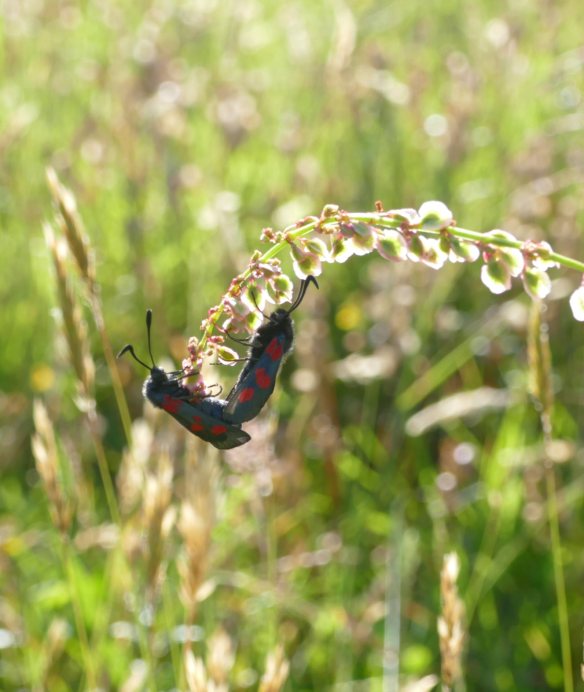 The month’s weather then reverted to being cool, windy and showery for what turned out to be a fairly typical sort of June month here,full of weather variety… 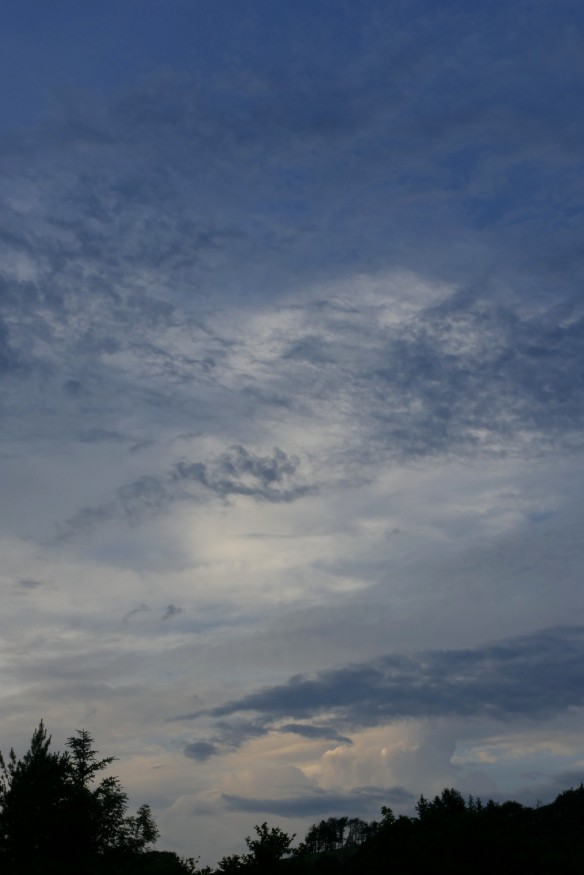 And in the last week of June, pretty much as usual, the first Hydrangeas began to bloom… 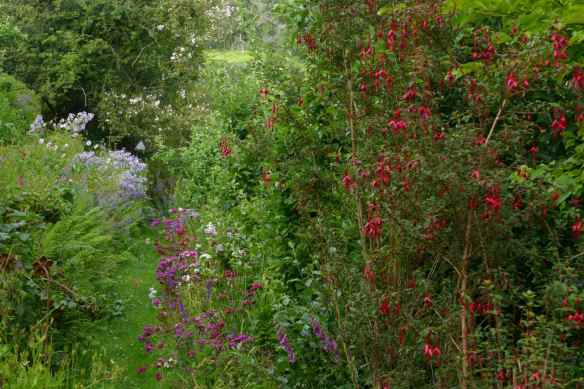 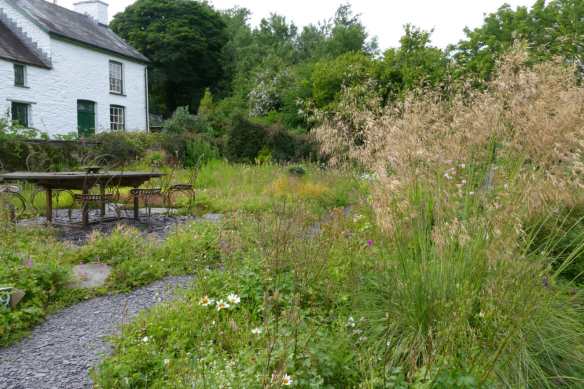 The rainfall total for the month at 174.5 mm ended up being the second wettest here for the last 7 years, and the PV total was a fairly modest 415 KWH.