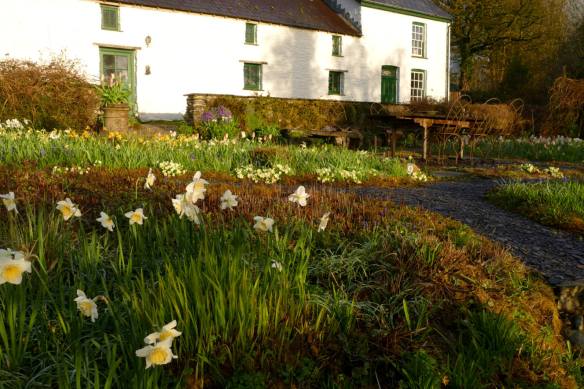 After a fabulous sunny, dry and often chilly 10 day spell at the end of March, it was with a certain amount of relief that the clouds returned, and a little mizzle appeared for the first of the new month. (For the long term record, April 2020 began with the country still in lock down restrictions from Covid-19 virus, limiting external exercise to one trip per day, with no more than 2 people from the same household. We are so fortunate to be living in this glorious place throughout these troubling times ).

A day with 3 mm of rain provided some relief from the need to water plants before winds again picked up, and temperatures rose into double figures. It’s been a huge delight at the end of many days filled with outside endeavour, to be able to trek up longevity hill with an insulated Eco cup of tea, and maybe one of Fiona’s excellent homemade toasted English muffins and enjoy the panoramic views from The Hut: 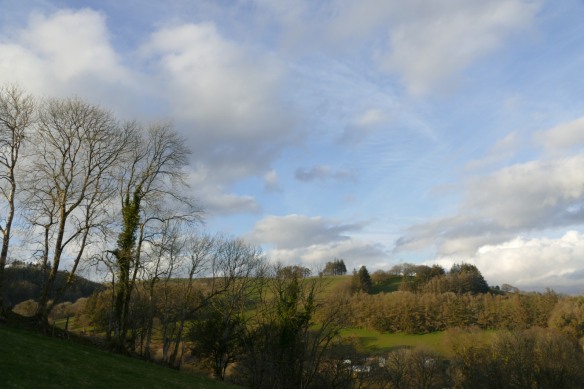 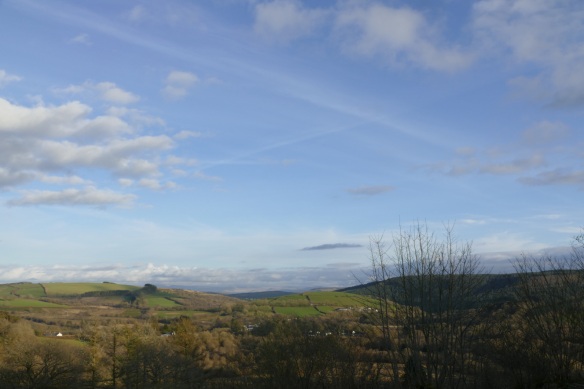 A night time weather front on the 5th produced another welcome 12 mm of rain, but current forecasts show a much longer dry spell ahead, so once again the weather has flipped from nearly continuous daily rain for 6 months, to more drought like conditions. This seems to be the climate’s new norm of violent oscillations in weather patterns. 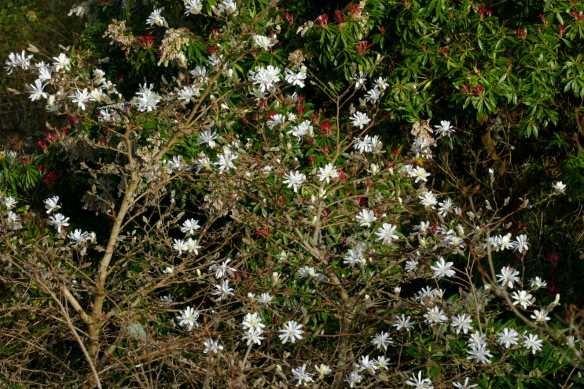 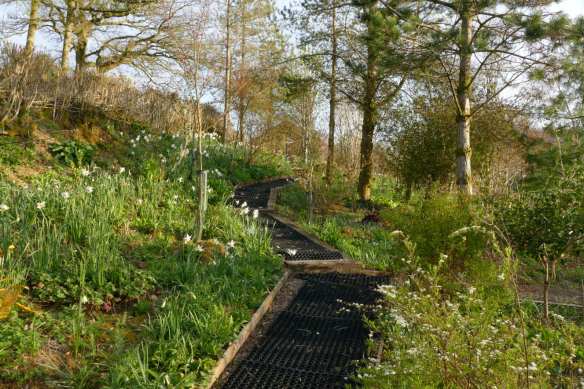 Regardless of this, the sunny conditions with minimal rain have meant that the garden has looked as glorious as it ever does at this special time of the year, with all the bulbs planted last autumn, reminding me that the expense and effort was well worth it.

This year I’m trying to rotationally water many areas of planted daffodils to encourage good flowering for next year too – in the past dry springs are often followed by poor flowering in the following year. 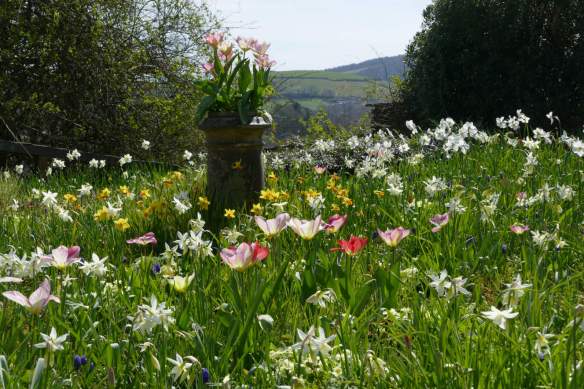 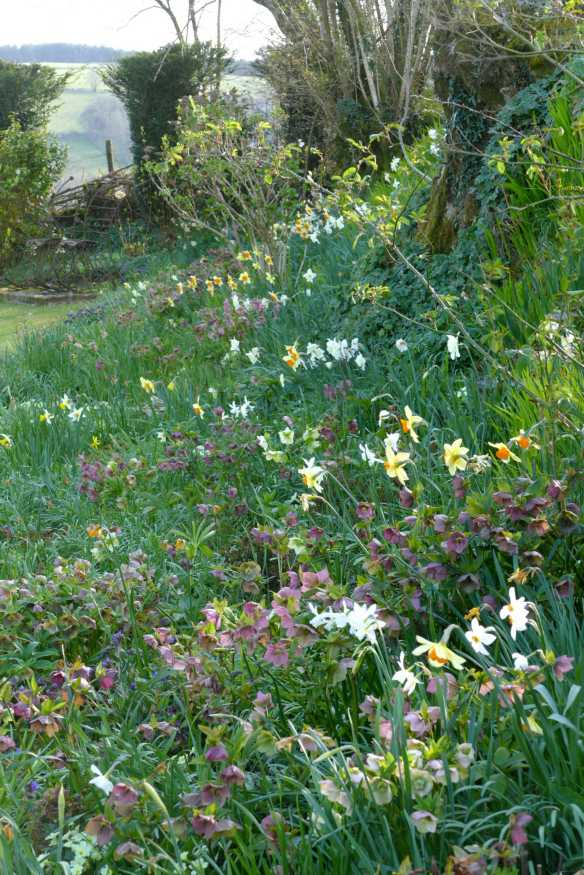 My enjoyment of the garden was slightly marred early in the month by the after effects – grazing and bruising – from a significant fall off my e-bike on a forest track at speed, and skidding along the gravel surface, hanging onto the still speeding bike, in Barry Sheene fashion. Fortunately and amazingly the bike was unscathed. Thanks to Veronica’s excellent physio advice I was back on and riding within 48 hours…

Alongside the usual regular garden work of preparing for and sowing vegetables, I’ve continued to repurpose, relocate and insulate several of my home made bee hives, hoping to catch or attract in a few more swarms this year, or next. For a period of several days around the 20th, I became excited when gradually increasing numbers of scout bees began carefully casing this particular joint. Measuring up and assessing its suitability. But nothing happened and the hive was later robbed by bees from another colony – possibly our own, flying in to remove the residual honey from some of the empty frames I’d placed inside.

Whilst the original first swarm butter churn hive from 2019 has continued to thrive, with complete lack of intervention from me over the last year… 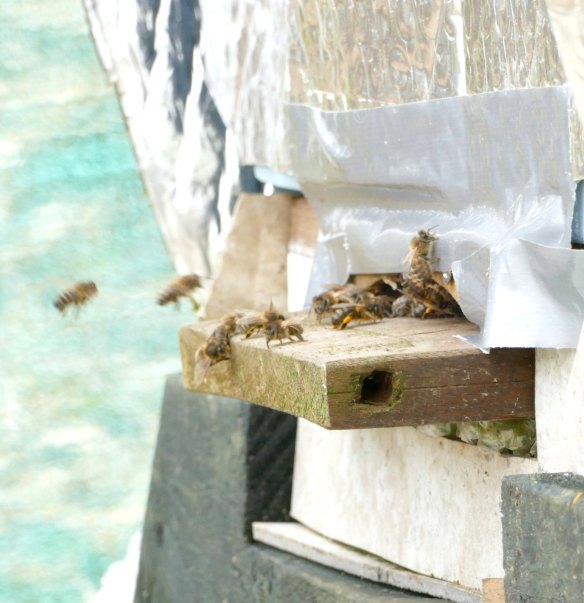 I was particularly thrilled to be able to see that the bees have now moved down from the main churn cavity, and have drawn out comb on the simple willow frames in the box below.

The month progressed in similar amazing weather fashion until the last few days, when at last the garden received 4 days of modest welcome rain and a drop in temperatures. Until then, April has been the most spectacular I can recall – sunshine, warmth, and of course courtesy of the Covid -19 lock down, very limited traffic noise and minimal jet activity, creating the most fantastic unspoiled soundscape where the birds have had centre stage. 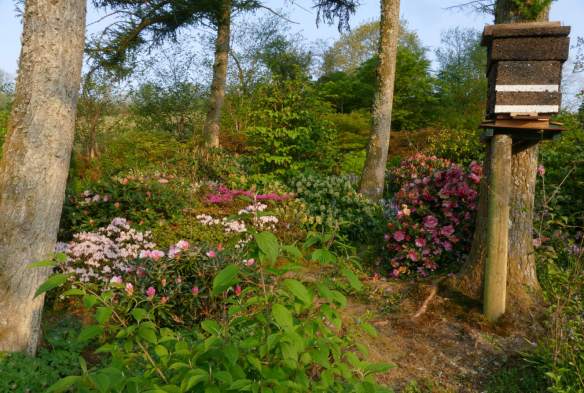 It’s difficult to do justice with a few still images, just how glorious our time here has been this month, with minimal distraction, plenty to do, but enough to time to still just sit, or wander and enjoy.

Nearly everything that is planned to flower through the month – Camellia, Pieris, Daffodils, Camassia and early Rhododendrons, Primula sieboldii, have all excelled, and with almost no frosts, and certainly no severe ones, have continued for weeks. The garden has changed daily, and given us so much joy at this difficult time… 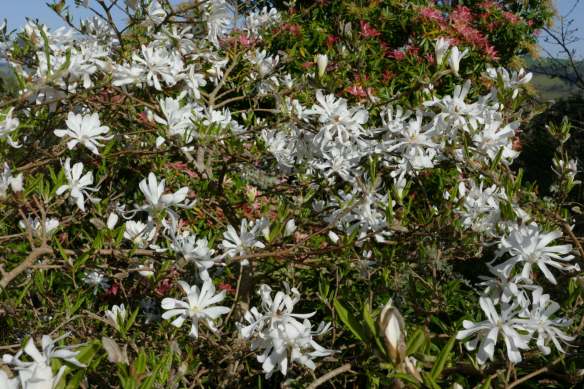 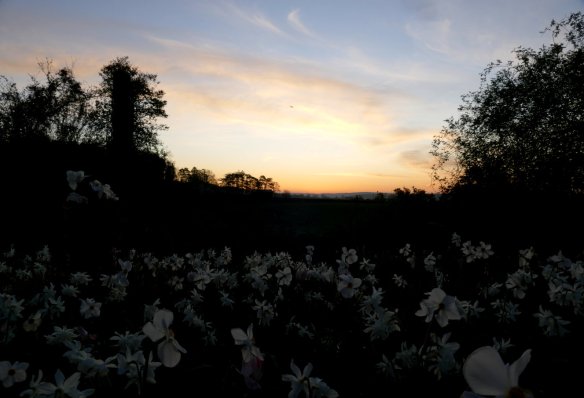 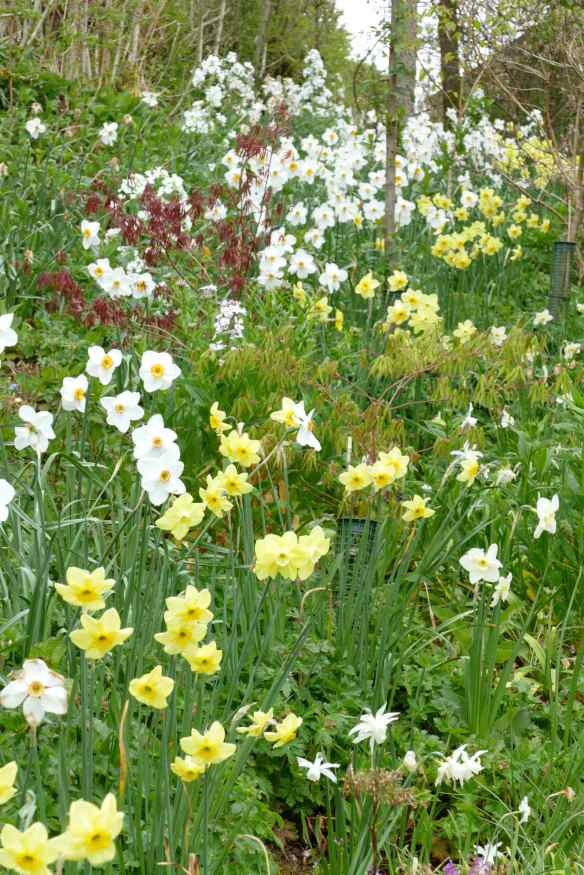 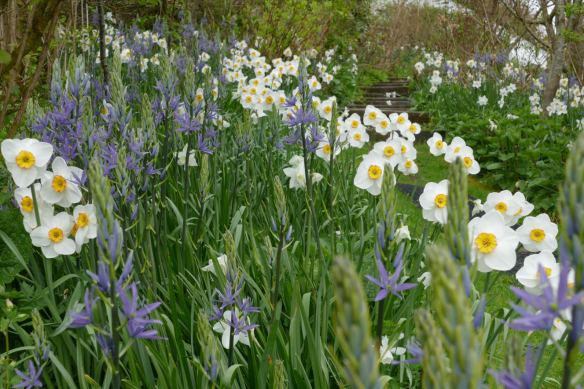 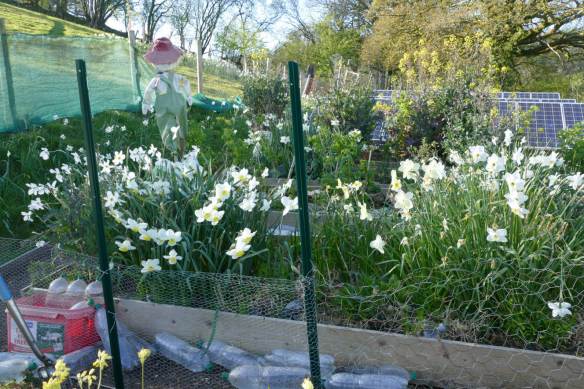 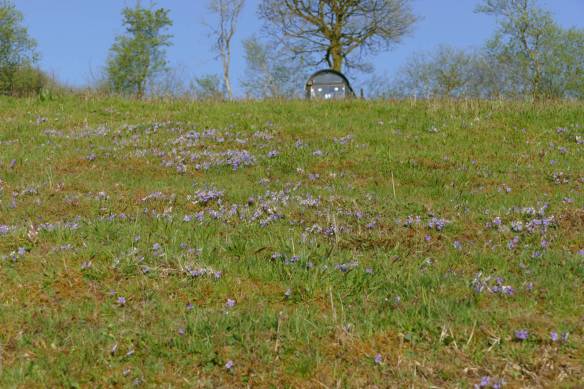 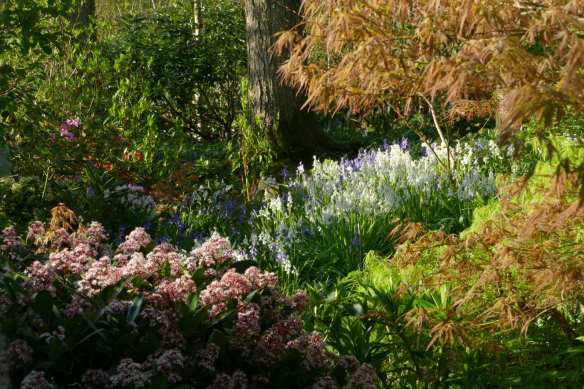 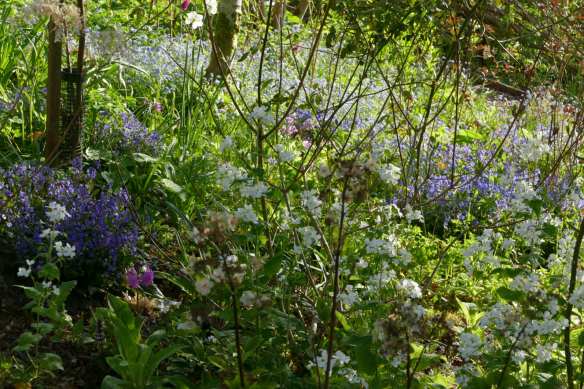 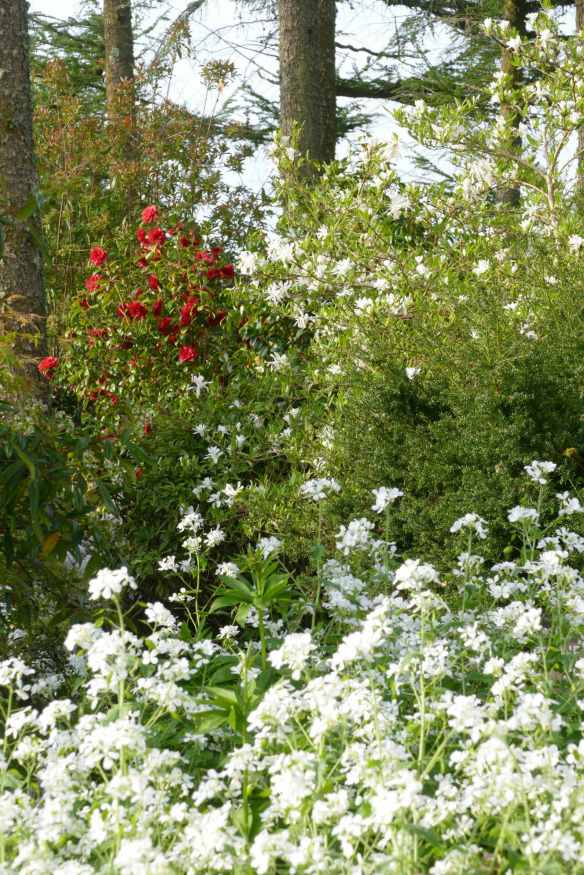 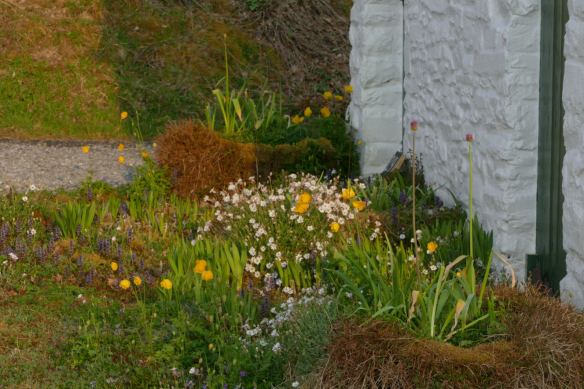 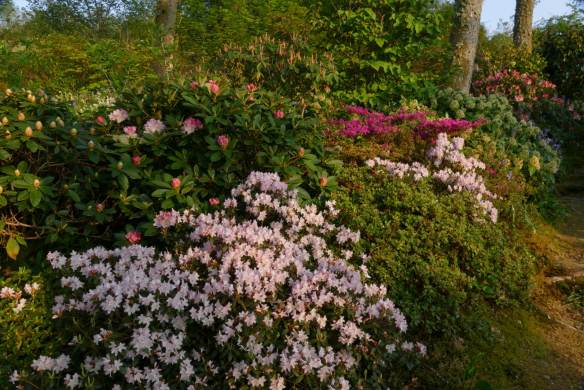 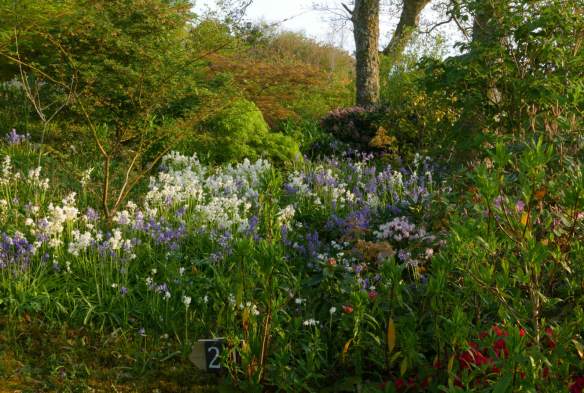 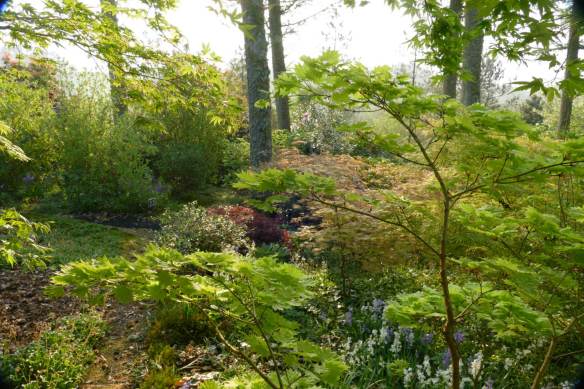 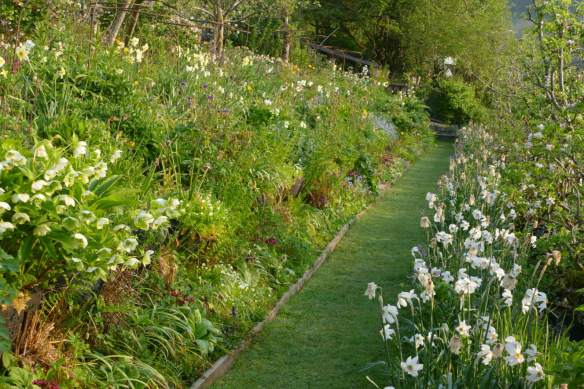 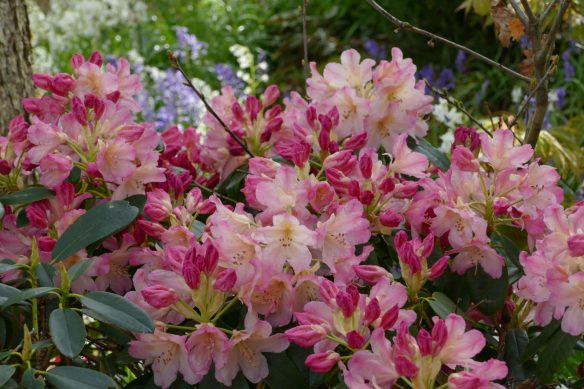 The final rainfall for the month of just 50.1 mm, and PV inverter readout, confirms how wonderful a month it’s been, weather wise, nearly breaking through the monthly 500 KWH reading, which rarely happens here. 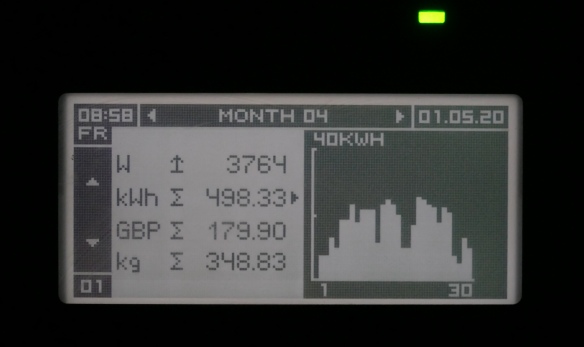