1: Agapanthus. One of the classic examples of the benefits of self sown plants. Native to the South African mountains, one wouldn’t expect such plants to thrive in wet West Wales. Originally we bought a few seedlings at an open garden in Doynton, near Bristol, decades ago, and grew them in pots. Moving to Wales we placed the pot in what we considered the warmest spot at the base of the South facing white washed gable wall, sitting on newly laid stream sourced cobble stones set in dry sand and lime, with a dash of cement. After a few years we noticed a seedling or 2 amongst the cobbles.

The originals in the pot died out in a harsh winter, but every year we get more offspring appearing and adapted to this spot, and more flowers growing in these very poor conditions – the only exotics amongst mainly native plants.

This year they got a scattering of dry seaweed meal in spring, and my impression is that the flower colour is even better than usual. We scatter the black seed around other areas of the garden, but they only seem to thrive in this more open location. 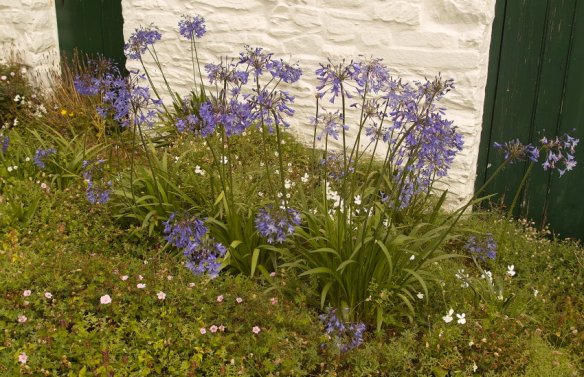 2. Stachys officianalis. Native Betony is a lovely flower for mid to late July, with gorgeous rich purple flowers, and attractive toothed leaves, which most bees, and some flies love as a nectar source. 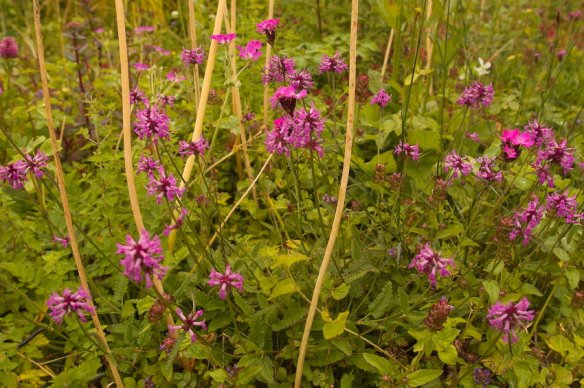 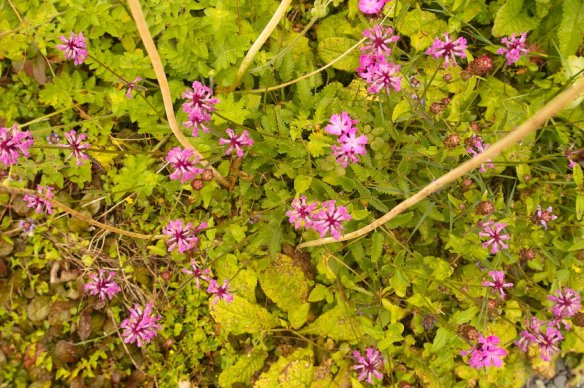 It is quite short in stature so we also grow a couple of pink/white bought varieties.. 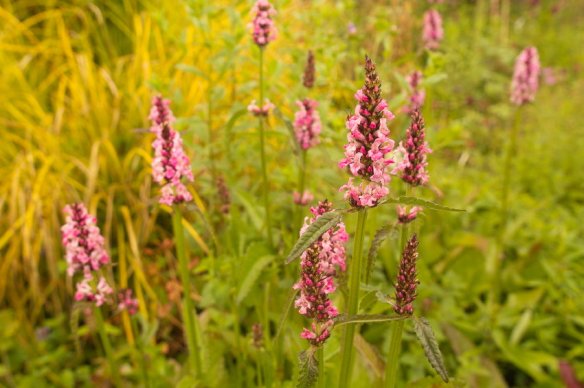 “Hummelo”, which is a taller strain selected from Piet Oudolf’s garden, and many home grown seedlings.

They all flower at slightly different times, and together give over a month’s interest.

3. Sidalcea. A North American prairie native member of the Malva family, we’ve bought a few named cultivars over the years, and their main benefit is their ability to thrive in the very poor conditions of our magic terrace garden…

And  that they flower – in a tricky end of July spot, before the majority of the Asters pick up the baton.

We don’t stake them, and they really have quite a brief flowering period 2 to 3 weeks maximum, though the different forms extend this slightly, but the fact that they are good doers, and the flowers shine under often gloomy late July skies means we think we should try to add a few more plants into other areas of this section of the garden.

4. Verbena hastata. Blue Vervain, Another North American prairie flower, with a brief flowering period, but which has the ability to pop up through other lower growing plants, even in very poor soil conditions, and add medium height colour accents throughout the garden in late July/early August.

The usual purple form is lovely, a pink, ‘rosea’ form adds variety. Neither flowers for very long, but as with Sidalcea, it’s a very useful time to have this colour in the garden. A very tough plant too, with attractive often purple tinged leaves and stems.

5. Verbena rigida. Native to South America this is our favourite Verbena. Shorter than V. hastata, or bonariensis, which we struggle to grow here, it’s a reliable perennial which spreads both by seeds and running rhizomes, which send up the flowering stems in late July to August. It flowers for a much longer season than V. hastata, and the larger, flatter pale purple flowers are loved by bees and butterflies. 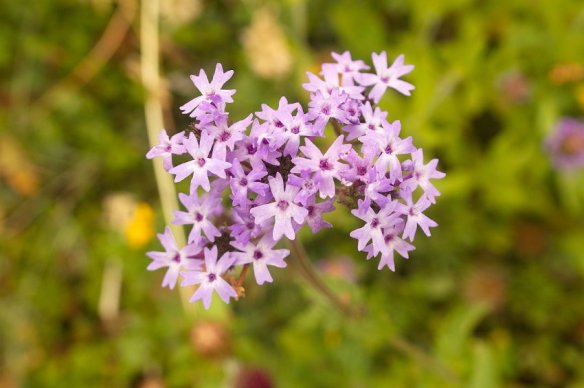 It can grow through many other lower growing plants, and with us even survives in quite dense shade, though doesn’t flower as well in this location. Interestingly it has colonised Australia and South Africa and is viewed as potentially invasive in these countries.

We would not want to be without it, in our late flower palette. 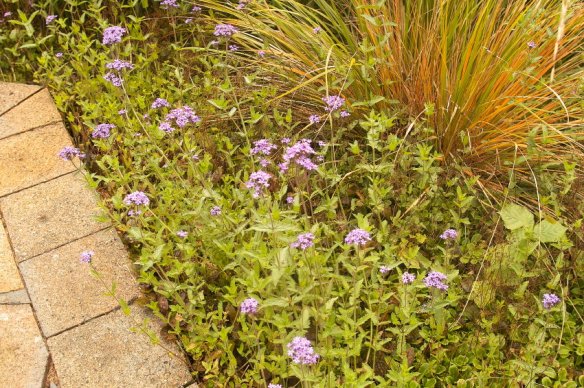 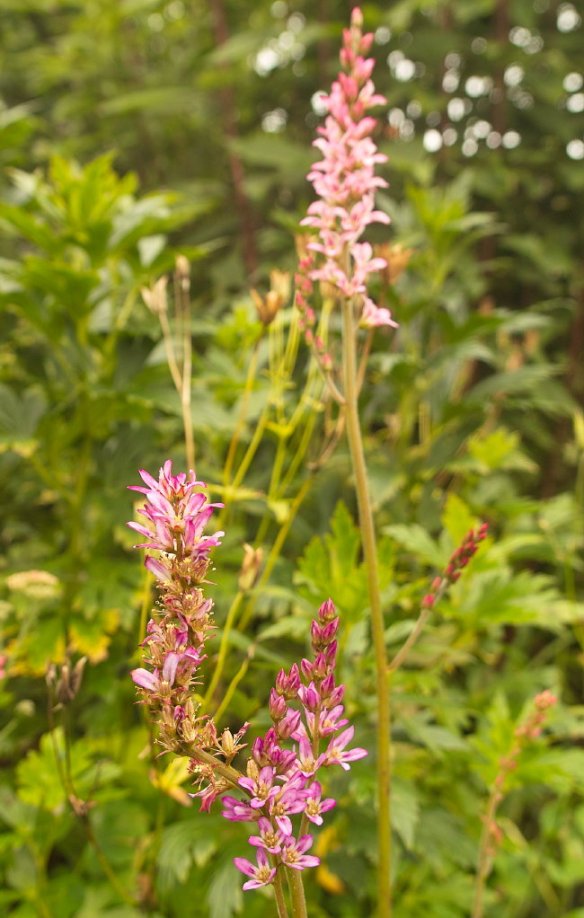 With us the basal rosettes of leaves are nearly evergreen in most winters and produce almost complete ground cover, so it’s not so good for low growing early spring bulbs.

In spite of being borderline hardiness it produces masses of fine seed, which we’ve found has germinated and survived in some very shaded locations, where the flowers are a real boost in late summer. And bees love these flowers. In a harsh winter the foliage can get knocked back, but even in our coldest winter, we lost very few plants, and slugs don’t seem to bother it significantly. 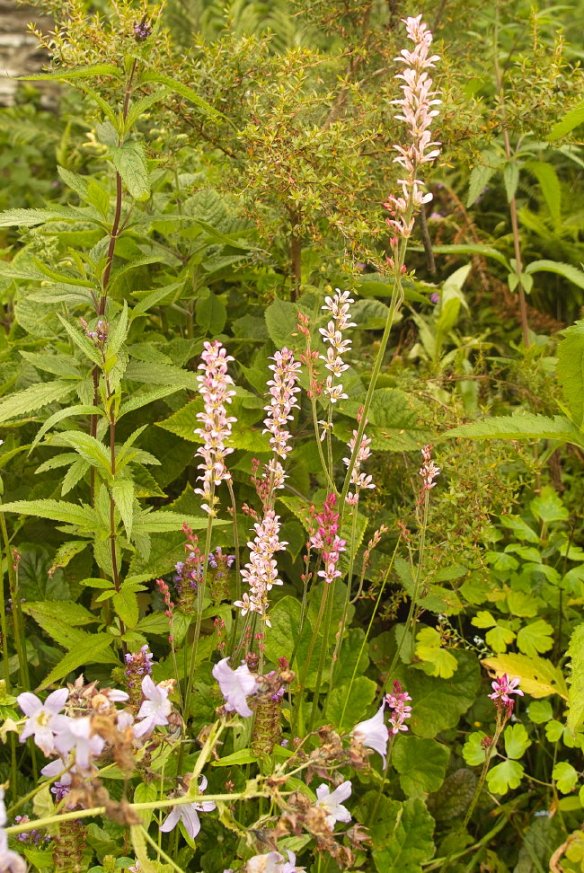 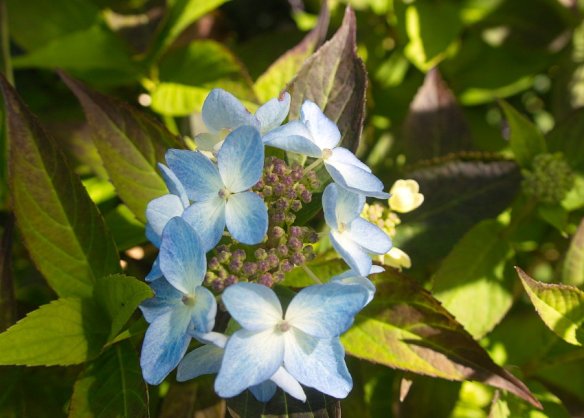 “Diadem” is nearly always the first to open, and has this big merit, along with consistency of flowering, leaves which colour up, to variable deep purple tinges, at the same time as the flowers appear, and never growing beyond a medium sized bush.

It’s also very easy to propagate from hardwood cuttings, so we now have numerous shrubs lighting up the garden from mid summer onwards.

Hydraneas seem such good value shrubs for this reason in many of the woodland parts of our garden.

8. Rosa “Grouse”.  We decided to try this rose after seeing it tumbling over a wall at the entrance to the fabulous Hergest Croft gardens near Kington.

We planted 3 separate bushes in big bags behind the low wall at the end of the old smithy/cowshed.

Trained onto a simple willow trellis for the first 3 years, the wall is now completely smothered. Blooming from mid to late July, it is consistently covered in smallish, single, pale apricot/pink flowers. 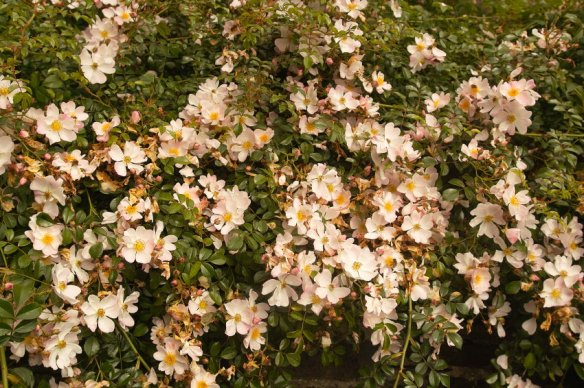 Most bees and flies love these, and the bushes hum with all the activity. The flowers also fill the air with a very distinctive, lovely scent – not classic rose, but very enjoyable. Small orange hips are produced after the flowers on the very healthy vigorous green foliage.

9. Astilbe. Unfortunately we have lost the names of 2 Astilbes, one pink, one white, which form quite a part of the garden scene in late July. 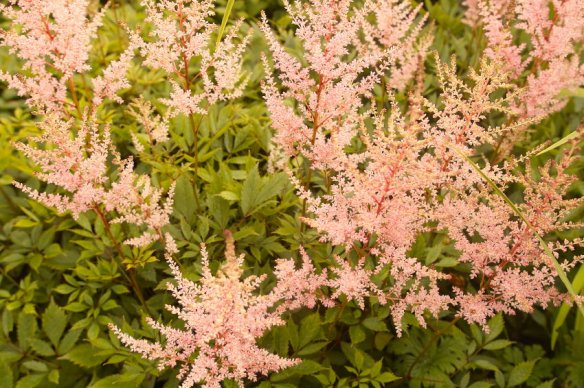 Before this, they add interest with their strong, cut foliage, the pink form emerging deep bronze, the white form mid green.

The frothy flowers aren’t of interest to bees, or many insects but they do last quite a long time and then mature into very attractive rust coloured seed heads, which stand the wet winters better than any other plants’ and so are often the very last to be cut back, once the first spring bulbs emerge to brighten the scene.

10. Hardy Geraniums. Again, no names for these particular Geraniums, but included for 2 reasons. They do give masses of flowers in late July, and provide very effective ground cover, even in fairly shaded parts of the garden.

BUT, know your Geraniums, because we made the fatal mistake of allowing these to grow in many areas of the terrace garden, and elsewhere. They are dominant plant forms, and will seed, and grow with such complete ground cover that nothing else coexists. They’re also very firmly rooted, unlike many of the other Geraniums we like, and it’s taken 3 years to remove them all. The area below was swamped 2 years ago…we’re still waiting to replant.

What’s left behind is numerous seedlings which emerge amongst other plants, and the slingshot seed dispersal of all Geraniums means we now try to deadhead all these once flowering is over, to limit such collateral spreading tendencies. 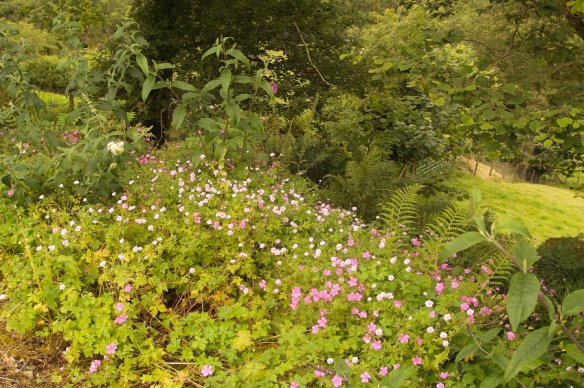 So now restricted to areas at the garden’s periphery, to counter grass incursion, which it does very effectively.

11. Rose  “Daughter of Felicite et Perpetue”. Another seedling rose which popped up, near to the parent plant. 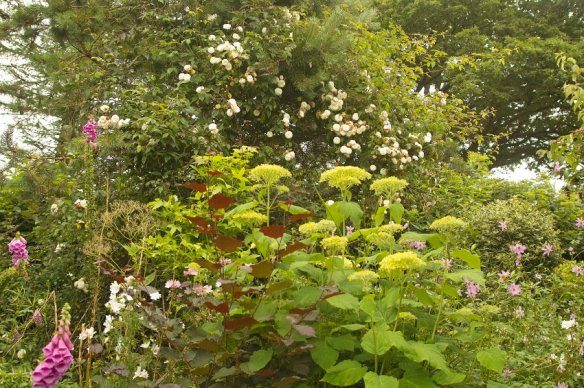 The flowers are very similar, being tight double noisette type blooms, in big clusters, which open to cream, with pink tinges. 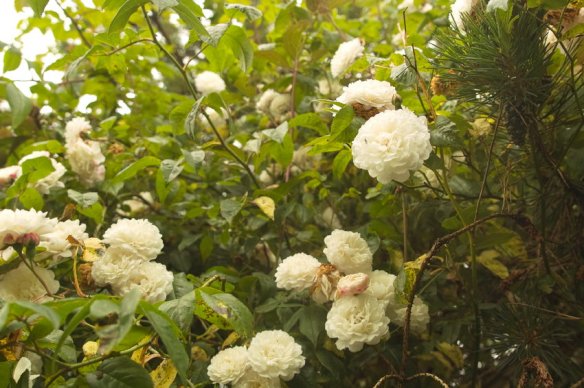 The foliage is much healthier than the parent, and the plant is more vigorous, and also flowers over a slightly longer period.

Already it has a huge impact when in flower from early July, through to the end of the month, scrambling up through a pine. 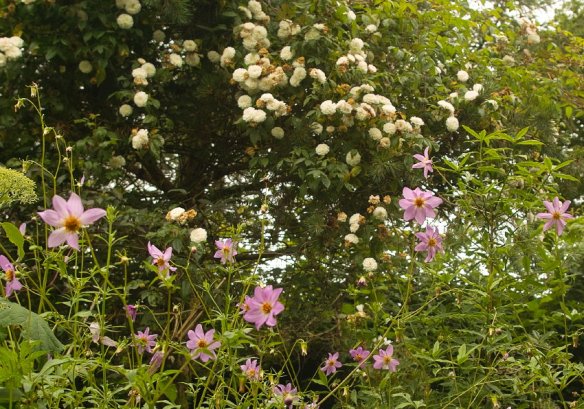 The only downside is that like its’ parent, it has little scent. 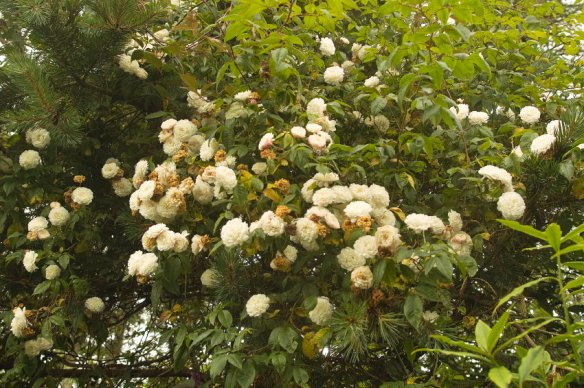 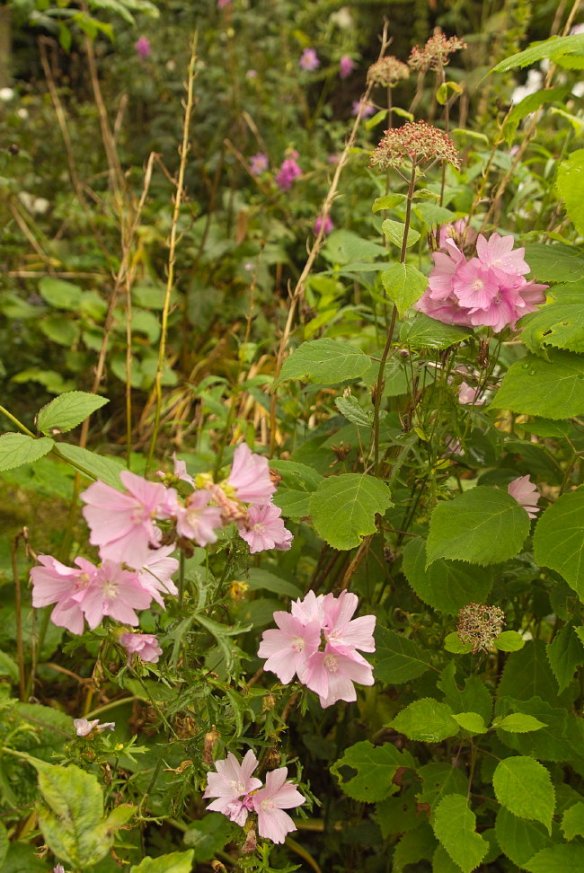 They flower at a useful time from early to late July, and the pink and white forms add great interest. But, for the first time in 2016, they have been knocked by rust, which has stunted them. Should this become a regular problem, we might have to reconsider their role in this area. 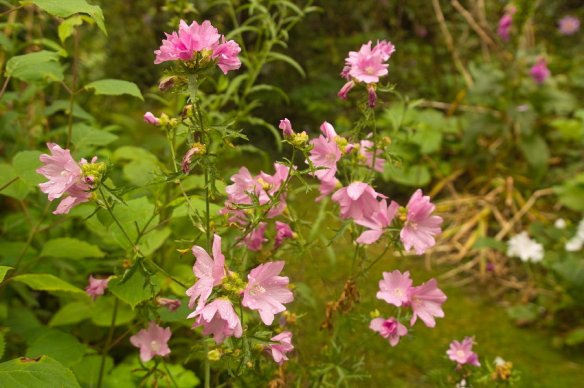