Here are the names of the 12 most enjoyed plants in the garden in the first 2 weeks of August 2016. Many will have been in flower earlier, in July, but take their place now as other plants have finished their show.

1: Allium sphaerocephalon. Over the years we’ve tried growing a few Allium varieties, and none seem to thrive up here, probably because of the combination of high rainfall and slugs. This is our second attempt with sphaerocephalon, and whether it’s a different clone, or we’ve better slug control now, I’m not sure, but the latest batch have done much better. Healthy foliage over a long period through the winter, and lovely flower heads which seem to take ages to colour, and then adored by insects for their nectar. Perhaps we might even get some viable seed from these?

2: Hydrangea arborescens “Annabelle”.  One of the earlier flowering Hydrangeas, by early August it’s reaching its’ peak impact with massive heads. A commonly seen Hydrangea, it has huge value in lighting a semi shaded spot, but the only drawback is that the foliage is really enjoyed by slugs, unlike many other Hydrangeas we grow. Shown below with the more recent “Pink Annabelle”, which is a nice alternative, but whose flower heads don’t seem to achieve the same scale. 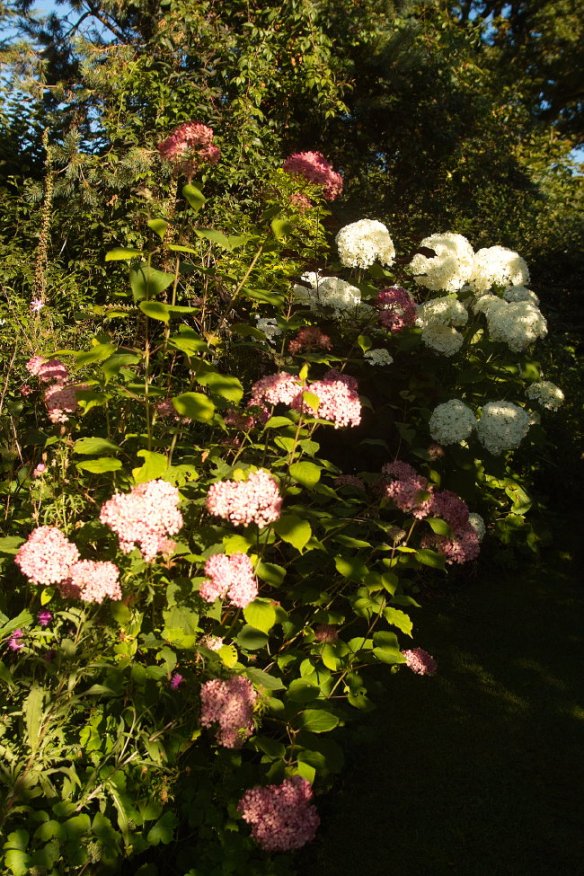 3:Hydrangea sargentiana. A fabulous large leaved and quite early flowering Hydrangea which is already becoming quite a tall plant with us. The leaves are very showy, and the large flat flower heads, which start pale, take on lovely blue/purple hues as they mature. It’s drawback is that the flowers seem to all appear at a similar time and aren’t as long lasting as some others, becoming slightly uninteresting as they fade and age. 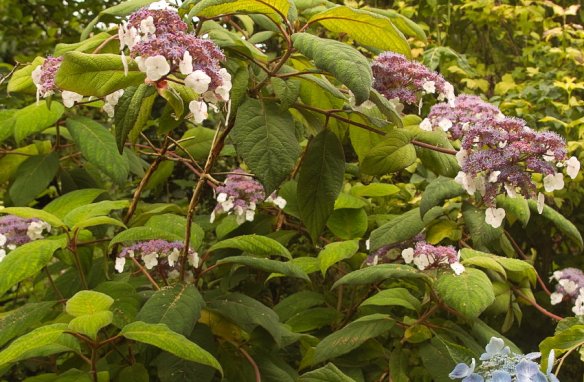 4:Hydrangea aspera “Anthony Bullivant”.  Another larger Hydrangea flowering later than H. sargentiana, with similarly roughly textured leaves, though not as large. The leaves are flatter than the species aspera. Very pretty pale pink outer sepals contrast with the deeper pink/mauve central flowers which appear over quite a long period and last longer than H. sargentiana. Another wonderful choice for a place with plenty of space to mature. 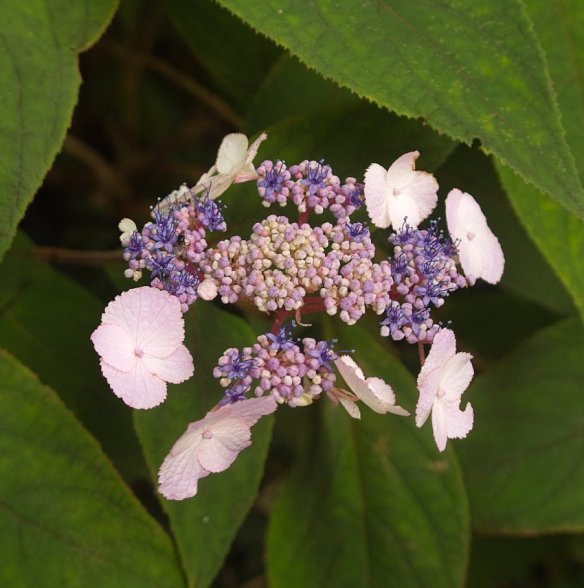 5: Hydrangea serrata “Tiara”.  One of our top 3 Hydrangeas, which like H. “Diadem” has the benefit of highly coloured late summer leaf tints which complement the ageing flower heads. Taller than “Diadem”, (up to about 1.3 m), the flowers are predominantly mid blue, with paler sepals, which like most serrata forms, flip over, or rotate as they age. It begins to flower a week or two after “Diadem”, but both forms look great for several months.

6. Clematis texensis “Etoile Rose”.  Clematis and Hydrangeas seem to be complementary plants for us, adding flowers in mid to late summer, with little effort once established. We do have to protect against slugs early on, or all Clematis will be killed by them. This form of texensis flowers later and for a longer period than the equally pretty, and larger flowered “Princess Diana”, which we also grow. Easy to manage by cutting back to about 18 inches in late spring, it climbs around one of my tree stump mushrooms with “The Lakeland Rose”, and Geranium “Rozanne”. 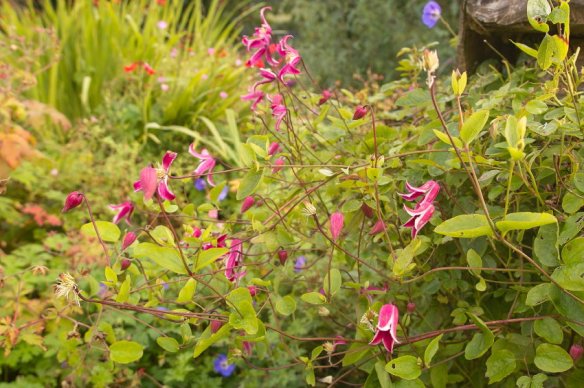 7:Clematis viticella “Royal Velours”. C.viticella seem to be another form of Clematis which thrives in poor soil, once established, and if the slugs are controlled early in the season. Fabulous deep velvety flowers are produced in masses over a long period – appearing a few weeks after another stalwart .C. “Etoile Violette”

8:Clematis viticella “Alba Luxurians”. We grow this form with blue flowered C. “Betty Corning”, but this is more vigorous. Initially I wasn’t convinced about the merits of the green tipped tepals, but en masse, they look great in sunshine, and even better lighting the area under grey skies. The earlier comments about when to cut back and slug control also apply. 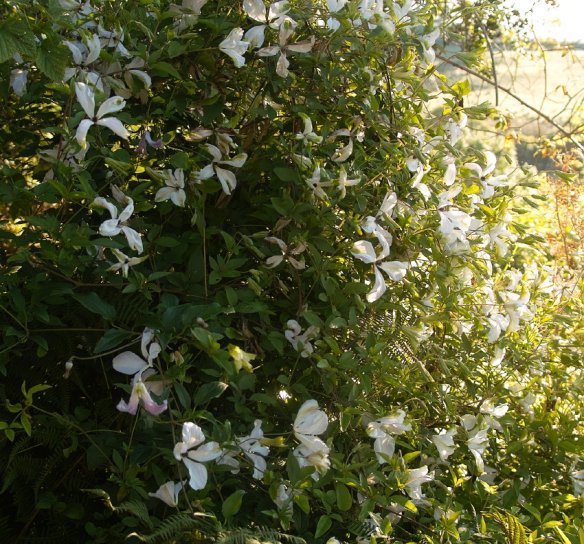 9:Lysimachia clethroides.  We used to grow L. “Firecracker”, but early on decided it was a menacing thug, smothering out other plants AND seeding around. This species is vigorous, but is later into leaf, with not so dense foliage, so ground hugging evergreen Saxifrage can survive beneath it. The goose neck white flower heads are delightful, straightening as they age, and the lower leaves take on yellow/orange tints. It is also a fabulous nectar source for many flies, bees and butterflies.

10:Oregano/Marjoram.  One of those invaluable plants in the terrace garden which seed around and are capable of growing up through the lower layer of ground cover. Varying heights and flower colours result, but it does have the potential in its more vigorous forms of blanketing out competition, so some judicious removal is needed. Another brilliant flower though for all our native insects, and great to pop the leaves into the kitchen. 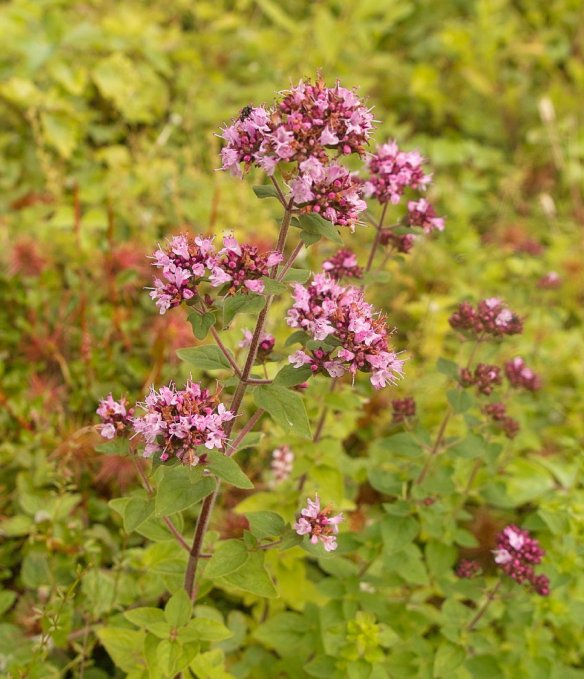 11:Sedum ” Red Cauli”.  I don’t remember where we bought this Sedum, though Beth Chatto lists it, so perhaps from her? We’ve tried other coloured leaf Sedum forms, but this seems both the prettiest and most reliable, and also flowers much earlier. The flowers last for ages, giving splashes of deep red amongst other plants. The leaves which begin as blue/green, also become richer and more purple coloured as they age. However, unfortunately the flowers have almost zero interest to our insect population, unlike S. “Autumn Joy”.

12:Aster frickartii Monch. Each year we look at the terrace garden in August/early September and wish we’d planted more Monch. And then do. Unfortunately, being sterile, it doesn’t seed around, but is invaluable in adding mid height colour amongst the other plants in this area, beginning with the A. sphaerocephalon, and marjoram and overlapping with the much later flowering Asters. Sadly like many Aster cultivars it isn’t as popular with insects as one might expect, but it is now a key plant for us in this part of the garden. 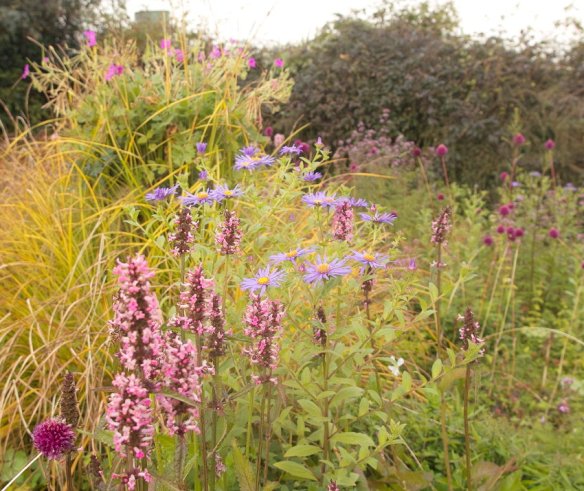 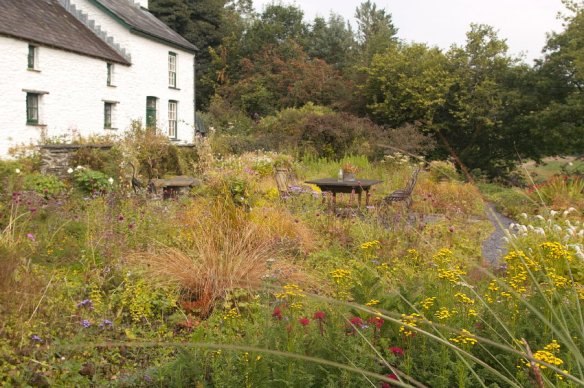