Below is the list of our favourite plants in the garden in the second half of March 2017. The idea of recording a dozen favourite plants in the garden every fortnight, came to me in mid 2016, so the whole year won’t be completed until around May 2017. I don’t tend to repeat plants that have featured in the previous fortnight, so it’s an attempt to show how there is always something new in the garden to tempt us out, whatever the weather. In late March waves of new flowers are appearing quite regularly, headed by Narcissi, and Camellia Spring is on its way, even if the weather sometimes let’s the show down. In 2017 this took the form of strong winds and significant rain for many days in the month. As always whilst some plants have enjoyed a great late March (Camellias and the Skimmia flowers), the daffodils which have tended to flower a fortnight earlier than normal have taken a bit of a battering from the weather.

1: Narcissus ‘Ice Follies’. AGM. Not actually one of our most favourite daffodils, but one of the most reliable for even the poorest parts of the garden, and having the advantage of being one of the earliest white perianth forms – which we find easier to incorporate in mixed plantings with the frequent pinks and blues of early spring flowers. 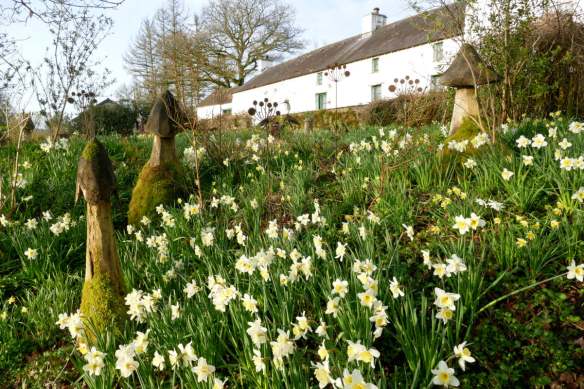 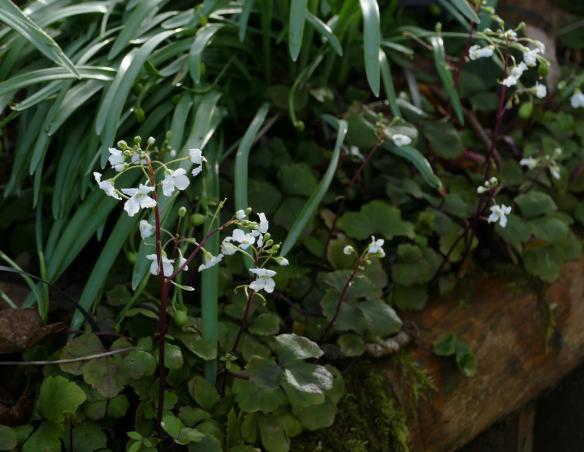 3: Camellia ‘Les Jury’. One of our most reliable, floriferous and vigorous Camellias, which has flowered well from a young age – until like many others. Flowers also cope better with ageing, frost discolouration, and the foliage is very attractive too. Plus all this when planted within 5 feet of the base of a mature Larch! 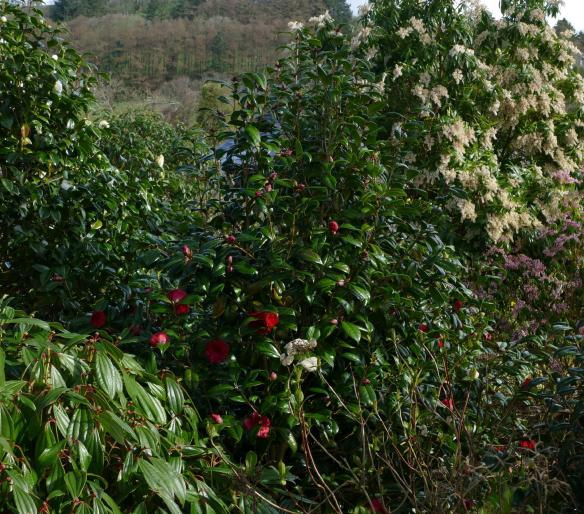 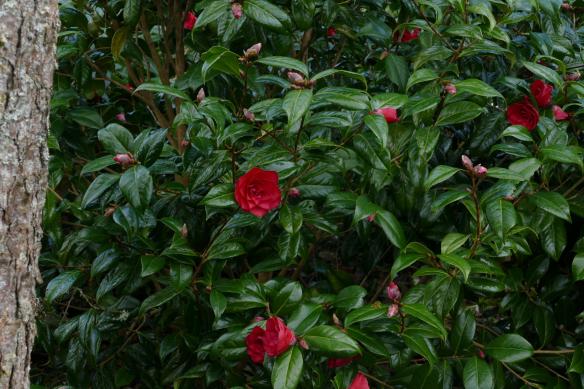 4: Camellia “Desire”. Probably our favourite Camellia flower, but it’s taken a while ( many years) to flower for us. However it’s planted in really grotty shale, so perhaps the delay is understandable.

5:Aubrieta x cultorum. Bought really early on in the formation of the garden and pushed into crevices in the garden wall overlooking the terrace. Many survived and it gives a welcome early mound of flowers, which later on appeal as nectar sources for bee flies, and Orange-tip butterflies. 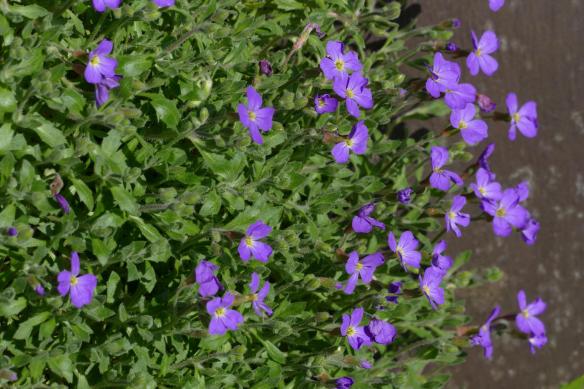 6: Narcissus “Trena”. AGM . A new daffodil for us in 2017, and it looks to be a brilliant hybrid of N. cyclamineus bred in New Zealand. Very sturdy, with beautiful flowers which are long lasting. 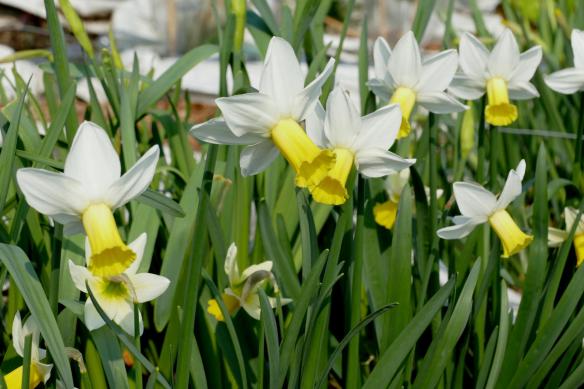 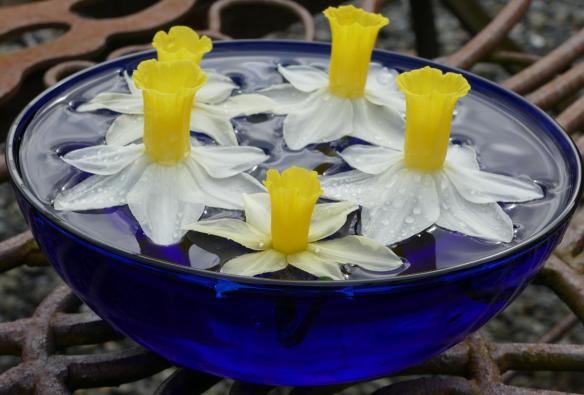 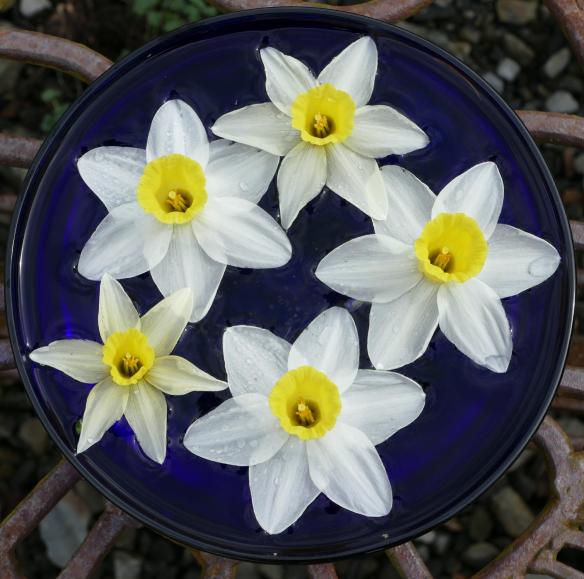 7: Brunnera macrophylla “Mayenne Blue”. This is our favourite Brunnera, which we bought with this name at a local plant fair. I can’t find any other records of a plant with this name. Beginning to flower in late March, it keeps going for at least 2 months with the colour intensifying.

8: Corylopsis pauciflora. A fabulous winter flowering hazel which I grew years ago from pre germinated seed, and which now makes a lovely medium sized bush, with long, scented primrose yellow catkins from late March for a few weeks. Needs some protection though, under a mature Oak. My other example in a more open position was killed by a very late frost.

9: Anemone nemorosa. Our native Wood Anemone is a lovely follow on woodland flower after most of the early bulbs – Crocus, Chionodoxa and Cyclamen, Scilla mischtschenkoana, etc. have finished flowering. We do have some named coloured variants, but really the white form is just as pretty. Slowly spreading around our copse, and a little bit of hand pollinating and scattering the resulting seeds around speeds up this process.

10: Pulsatilla vulgaris. The Pasque flower, a much anticipated early flower in shades of reds and purples, seeding very slowly on our South facing bank beneath deciduous trees, and taking over from the early Crocus and other bulbs growing here.Never in flower for  very long, but the hairy leaves and silky seed heads extend its season of interest.

11: Tulip “Flaming Purissima”. We grow very few tulips. This T. fosteriana form survives several years in the ground, and multiplies well in pots/beds if lifted. So we’re trying to institute a rolling programme of replacement/topping up. It delights for 3 weeks or so, around late March or early April, with variants from nearly all red to white and pink variants in between. The ones we lift and replant in the autumn to top up numbers in the ground, or put in containers always flower earlier, and are bigger than those left in the ground, but this extends the season of interest. 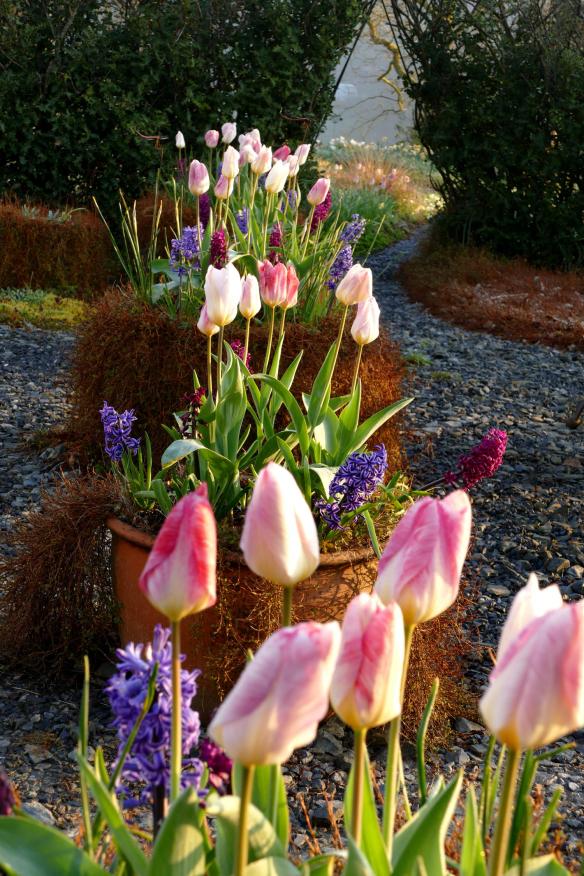 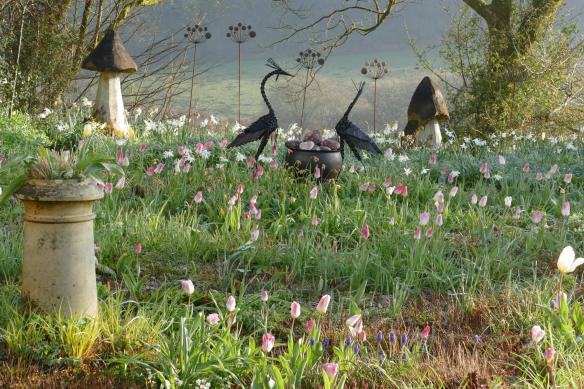 12: Narcissus “Thalia”.  Choosing another single Narcissus cultivar from the many in flower in the last fortnight in March is tricky, but N. “Thalia” is reliable, floriferous often with 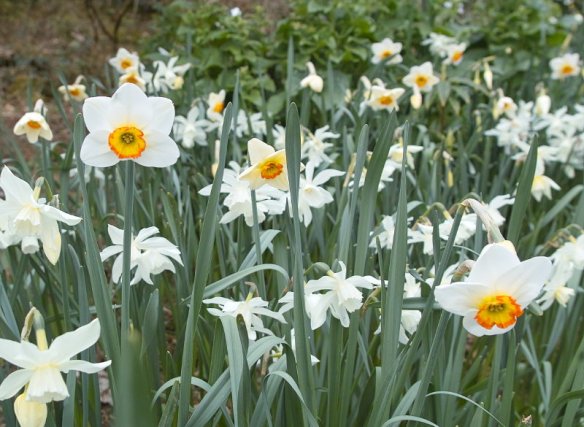 2 flowers per stem, and adds a grace and charm, and being all white, can be worked into lots of different plant combinations around the garden. Each year we say we need to plant more of the, which is a pretty good recommendation!