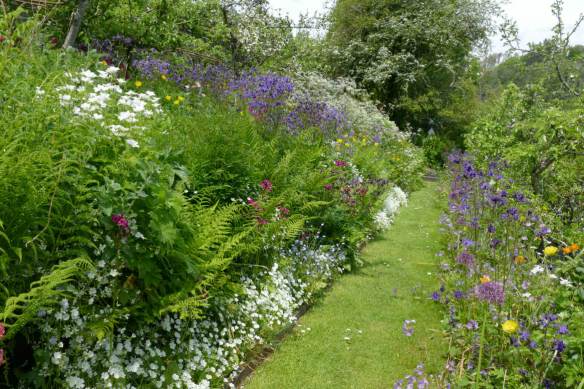 June 2021 saw a much appreciated change from most of May’s cool and record breakingly wet, dull weather.

Temperatures gradually rose a little, and at last the garden and meadows began to catch up with where they should be at this time of the year.

The insulated national beehive, which had a swarm placed in it last May, continued where it left off at the end of this May, with 2 cast, after swarms on June 1st, and 2nd, making a total of 4 in the space of 6 days.

3 of these were rehomed in vacant hives, so my previously estimated maximum of 6 colonies around the property, of which only 3 will ever have any honey removed from them, has been attained early in the year. Given how early these swarms materialised, there’s a good chance several will make it through to next year. 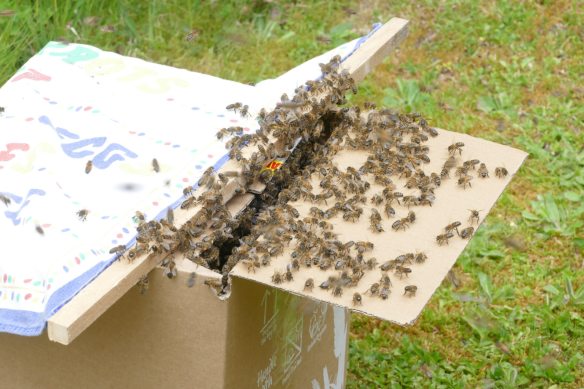 2 consequences of having this happen early on, is that firstly we’ve never had so many bees, both honey, and bumble, around the garden which makes a huge visual and auditory difference to the experience of being in the garden, during most of the day. 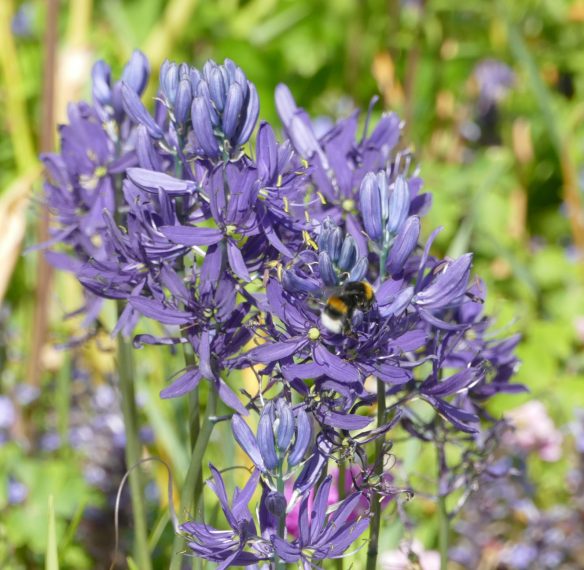 The second impact, is that many flowers aren’t lasting quite as long as one might expect, since the pollination success will have been the highest ever achieved. This has been particularly noticeable with the later flowering Camassia and Allium. 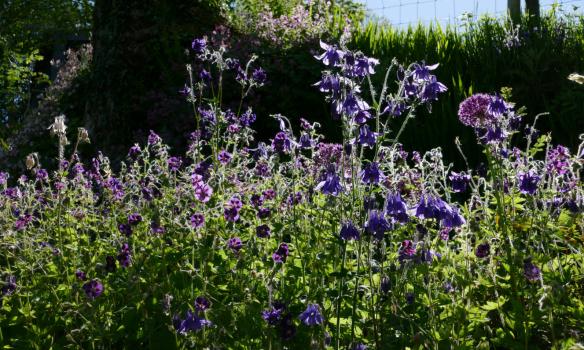 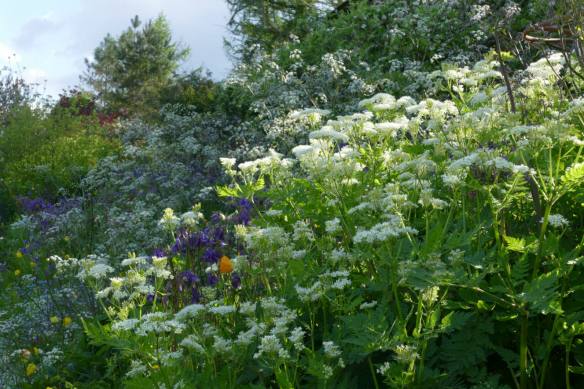 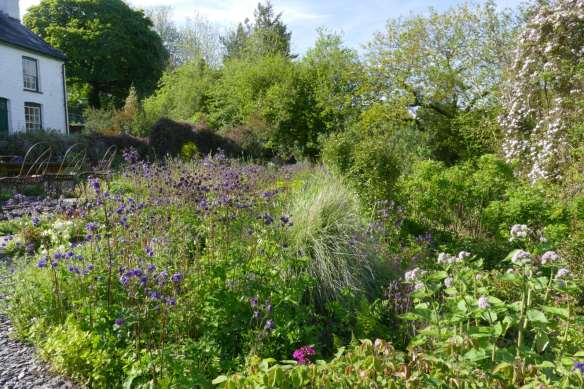 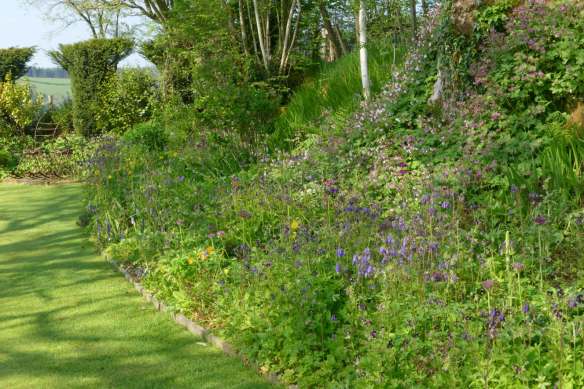 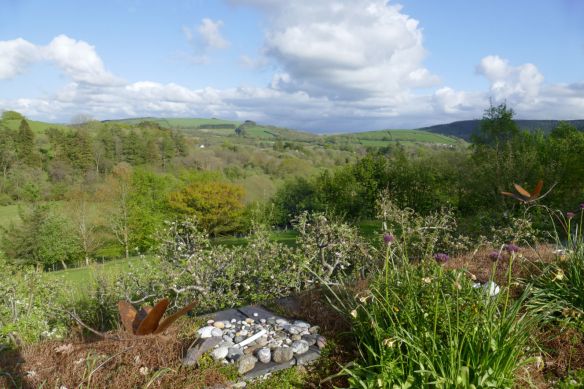 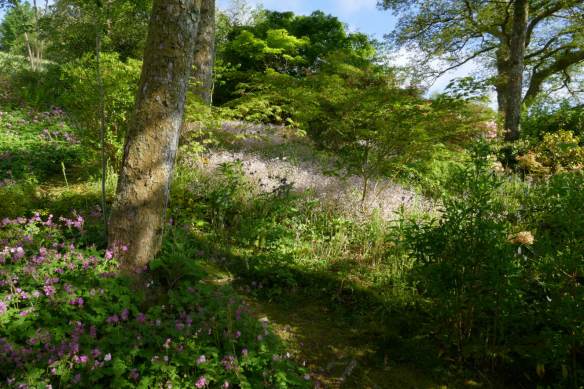 A few damp days, following on from the wet May, meant me taking a chance on planting out about a dozen more Clematis montana cuttings which I’d grown on, to add more flowers higher up in various trees around the garden. 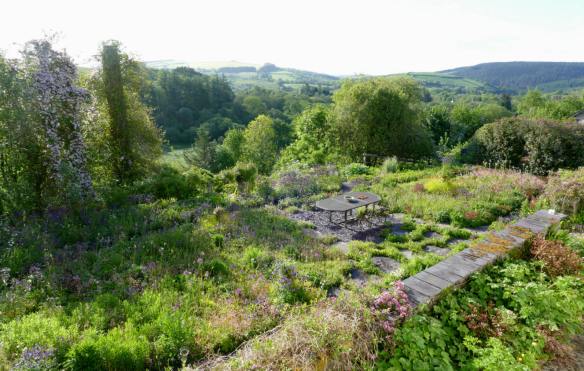 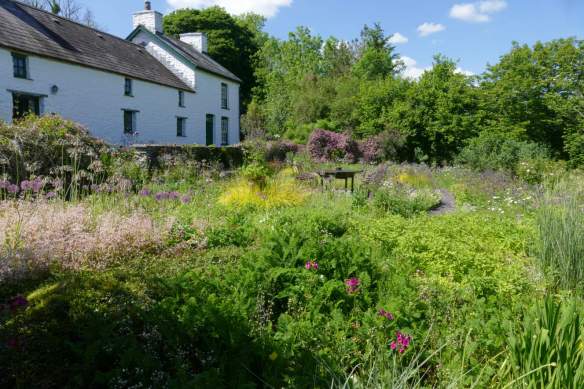 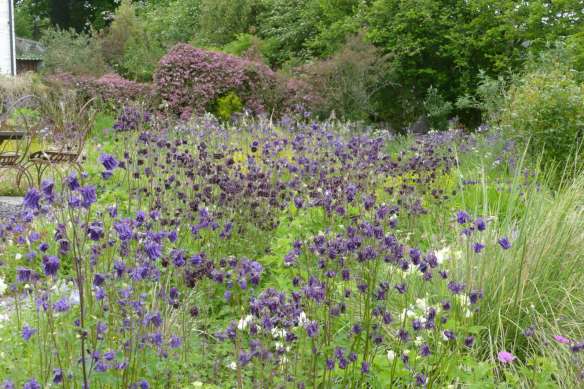 In addition the novel, memorial molehill, created from scraped up molehill soil from the top meadow, was planted up with a selection of annual Echium ‘Bluebedder’, dwarf Cosmos, scattered opium poppy seeds and a peripheral ring of Dahlia merckii seedlings, with the hope that it’ll provide a blast of colour and pollen/nectar from mid- summer onwards, if I can keep the slugs away from the small seedlings to let them establish. 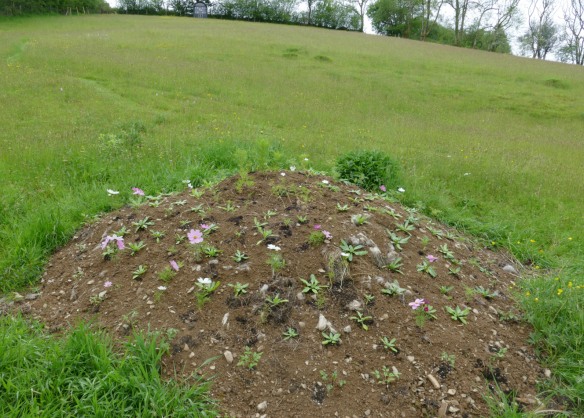 Both hay meadows have come on in leaps and bounds from last year. After a disappointing 2020 for orchids, there are now nearly 300 flowering in the upper meadow, with many appearing in different locations throughout the field, and emerging over several weeks. 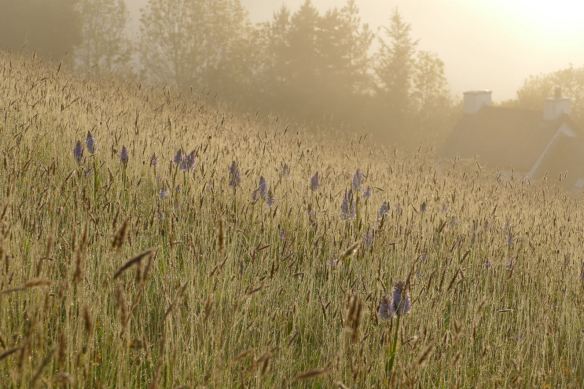 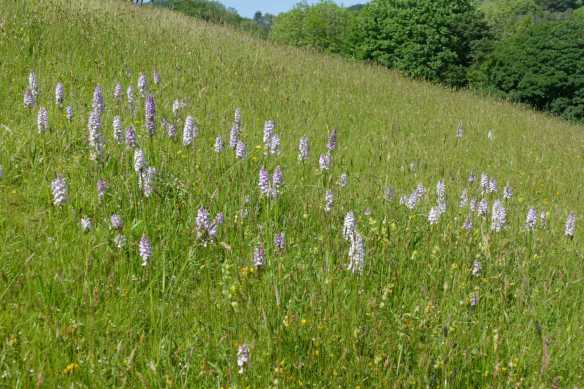 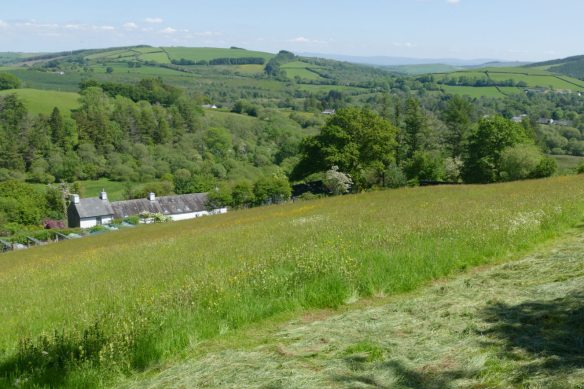 A singleton has even popped up in the lower meadow near the “pond”. Pignut,  Conopodium majus, is becoming more widespread, and last year’s transplanted Geranium sylvaticum seedlings, grown from collected seed from a Northumbrian meadow, have flowered, adding splashes of wonderful blue, and hinting at what might develop in years to come with a bit more nurturing, with at least 2 different ecotypes, one taller and with smaller flowers than the other form.

With the meadows looking so lovely, and being noticeably “thinner”, we’re planning to delay cutting most of it until later in the year than in previous years. Our sheep numbers are being gradually reduced through annual culling for the freezer, and non-replacement. 2021 has seen us begin with 23 ewes, down from 27 two years ago, and still too many for the really cold start to the year, and consequent grass shortages. We suspect that as grass yields decline over time, having lighter hay crops and perhaps more standing herbage over the winter months in the other fields, will help us as we age, and find the annual hay making effort more of a strain.

Notwithstanding this, a forecast very hot and sunny couple of days, on June 12th-15th, saw me cutting much of the periphery of the upper meadow which always has fewer flowers and grows lusher grass. As well as some small areas in the lower meadow, where this year we’ve achieved the blanket Yellow rattle, Rhinanthus minor, germination across much of the field, which is always the precursor of greater floral diversity, albeit at the expense of the weight of hay crop. 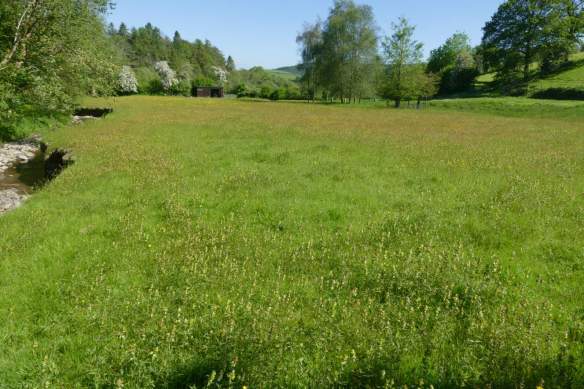 As June progressed, the weather stayed quite benign, with limited rain until June 28th, when a front moved up from the South East – an unusual direction. 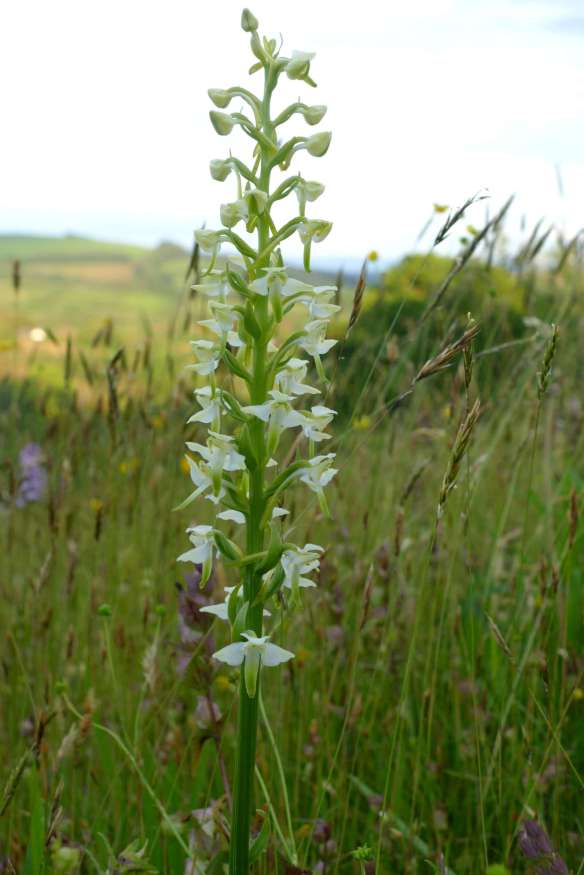 By then the upper meadow was looking spectacular, with the extra excitement of our first Greater butterfly-orchid, Platanthera chlorantha, appearing towards the end of the month. It’s always possible these may have been mown off in previous years, before they flowered – later cutting now seems inevitable in future years, to allow these wonderful flowers to thrive. The compilation below shows just how lovely the upper hay meadow is now looking, about 8 years after we began the process of restoring it to floral diversity.

The month finished as being another very dry one, with just 33.1mm of rain, following on from the very wet May, and very dry April 2021. But in spite of this temperatures were a little on the cool side, and the month wasn’t all that sunny, as the PV inverter record shows.