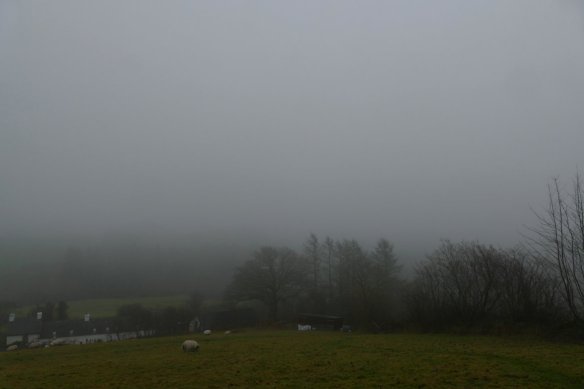 December began with grey, damp and quite mild weather. Much of the ground in the garden was soggy after a typically wet November.

The first snowdrop cultivars’ opening was a little later than in 2017, but still earlier than usual.

However the Cyclamen coum flowers began to open much later than usual (typically beginning in late October to mid November). 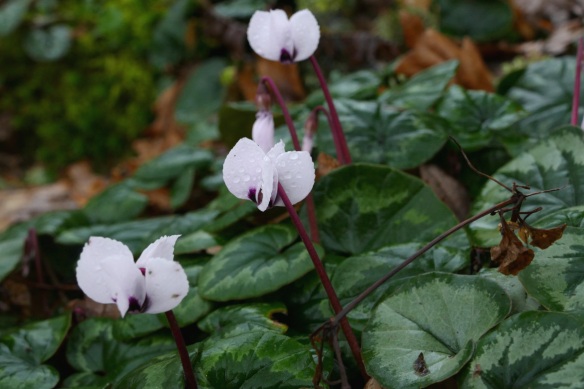 In addition the Daphne bholua began to open just a few flowers by the middle of the month.

The Hamamelis all succumbed to a combination of poor weather and probably fungal infections through the year. We shall miss their flowers over the winter, but don’t plan to replace them. They’re expensive grafted plants and take many years to begin to flower well. In addition both Liquidamber and Eucryphia trees succumbed, stressed by the late spring and very dry summer. 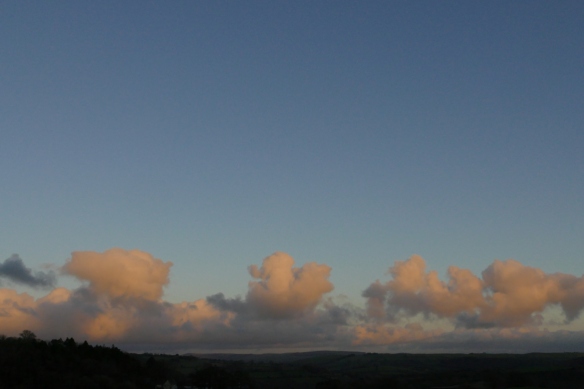 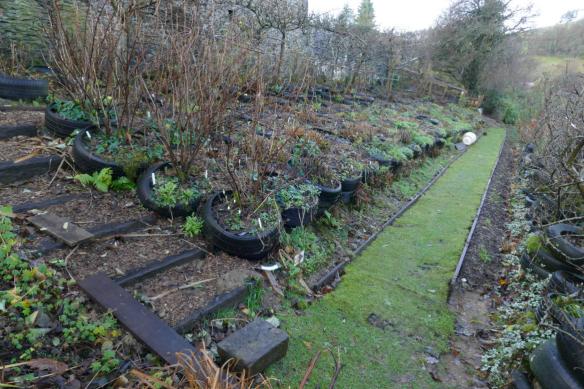 Much of the garden was tidied up by early in the month – now a necessary prerequisite for coping with both the typically wet mild early winters we seem to experience in many years, and the consequent early emergence of many bulbs. 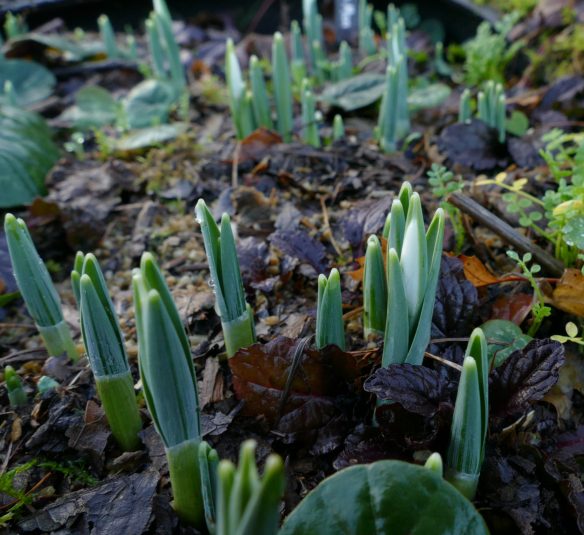 By the middle of the month only one significant frost had hit the garden, and consequently we did experience poor light levels for much of the early part of the month, after a few lovely sunrises. 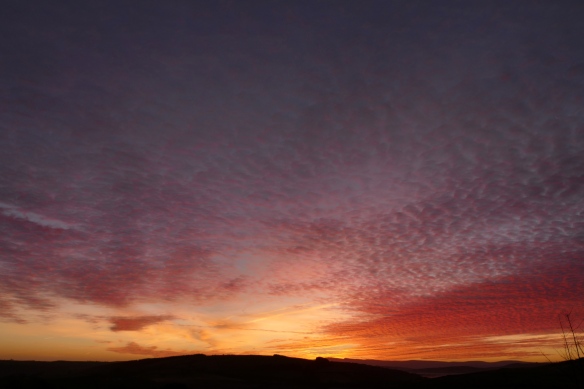 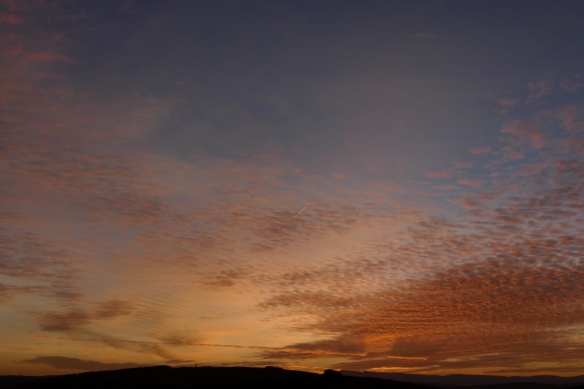 This year the massed starling flocks are flying to a roost to the North, probably near the coast,  and often now seem to use the Shepherd’s Hut as a navigational point, so sitting there at dawn, or dusk, with a Beanie hat pulled up over one ear, one experiences the typical rushing whoosh of hundreds of beating wings, before the flocks fly over the hut and down into the valley over the village.

December 22 nd was a rare wonderful sunny and warm day. Time for some gardening, snowdrop lifting and splitting, and even the resident beehive’s inmates took the chance to stretch their wings and legs briefly, though I only saw one that made it to the wide open flowers of G. “Mrs. Macnamara”

This was the last day with any reasonable light during the month. Although a high pressure system developed, the forecast of many dry days were marred by very low cloud and mizzle, or even light rain – great for moving snowdrops, but rather un-wintry weather. A tiny scrap of blue sky at dusk on the 29th was recorded with plane flying in the yard…

So mild was it that on December 31st we were able to enjoy lunch outside, with Fiona’s mother at The Plwmp Tart cafe after a trip out and walk along the wonderful beach at Penbryn.

So the year ended on a grey note, with the third wet month in a row – not exceptional, but a total of 238.6 mm, after October and November’s plus 200 mm figures boosted the annual total for 2018 to 1851.9 mm. This high total surprised me, and highlighted the concept of weather mean reversions here – in spite of the longest dry summer since, locals tell us, the 1940’s, consistently wet months from August onwards kept the total figure over 15% higher than the previous lowest annual total I’ve measured here in 2016 of 1600 mm.

PV light levels were typically low, at 31.8 KWH, though not as bad as the dreadful December of 2015.

What’s more the annual PV total of 3473 KWH was the best ever recorded after the 8.5 years the system has been operating for – courtesy of both the excellent summer months. For once a more or less symmetrical bell curve of output through the year, as one might expect, was achieved. Again, an interesting contrast with the very “dry” year of 2016, when the figure was just 3299 KWH.

All this mild weather saw 51 different forms of snowdrops in bloom by New Year’s Eve,  a record number, and one which ensures I get out into the albeit poor light on a regular basis to monitor and record them. This, I’m sure, helps dispel the SAD like tendencies which otherwise would hit me hard at the turn of the year. 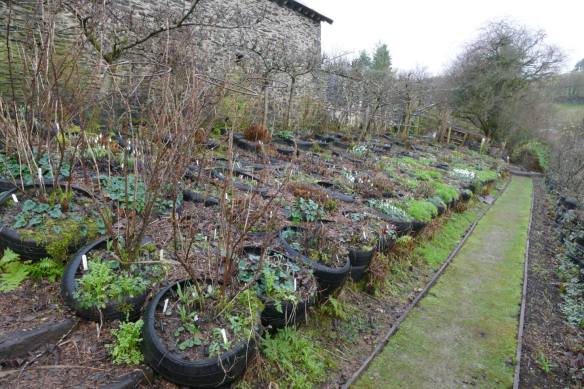 First Crocus flowers, and at last massed Cyclamen coum and Daphne bholua scents were the other highlights, post Christmas, along with some aberrant, still flowering plants… 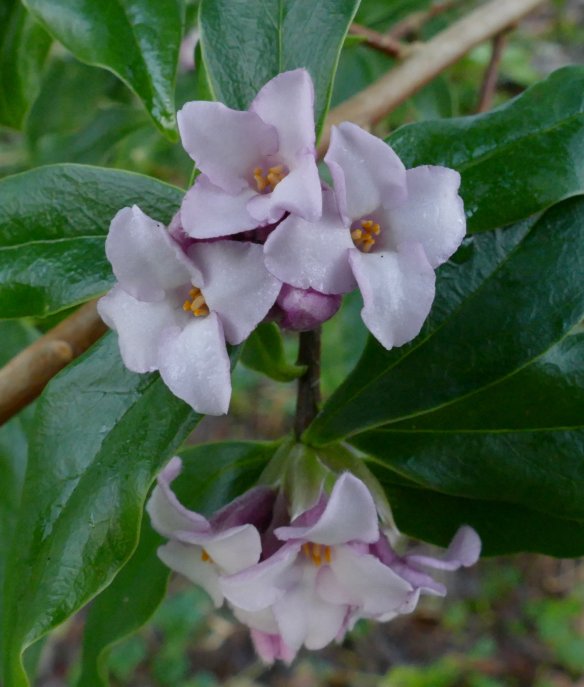 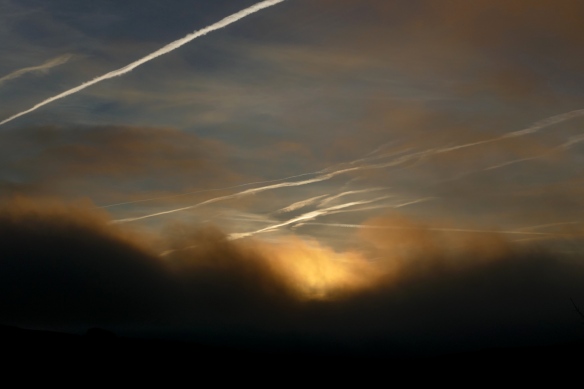 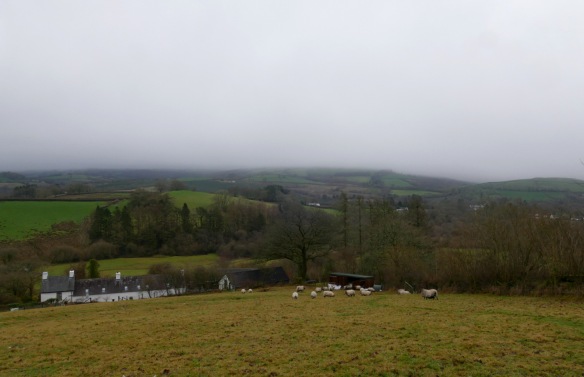 In a year of extremes, and violent oscillations both here and abroad, politically and climatically, what delights await our world in 2019?