This task has proved more demanding than I thought, and will no doubt be occasionally tweaked as the garden changes over time, with some new introductions and perhaps certain plants removed which die, or fall out of favour. However it is a distillation of what forms the basis of the garden, and what has been shown over years to thrive in our high rainfall, upland area without any real cossetting.

The process of recording everything has also encouraged us to look hard at the garden and distil its key elements, and work our which plants create interest for the longest seasons. So for anyone contemplating doing it, I’d say the benefits are huge – particularly if you have garden visitors – since it provides a very easily accessible resource to show what a plant looks like at a different time of the year, (even more easily accessible if you have decent mobile or internet access – which of course we don’t!).

1: Aquilegia vulgaris. The sort of plant we love, since almost none of those currently in the garden have been planted, they’ve just grown from seed which we’ve saved and scattered. For a good six weeks they light up the garden with colour – historically we’ve favoured dark blue or purple forms, but as with much of our planting, I’m becoming less of a control freak and pinks and even the odd red now creep in. It’s a brilliant, favoured nectar source for many bumblebee species as well, though honeybees don’t visit the flowers. It also associates so well with other cottage garden type flowers, and slugs and rabbits don’t touch it either. A short lived perennial, you do need to leave some seed to fall, or it will die out eventually. Is it a thug? We don’t think so, we love it…

2: Clematis montana ” Broughton Star”. One of the first Clematis we planted at Gelli uchaf, we love both the purple green foliage and masses of red pink, semi double flowers. For just over a month it’s a star performer in our terrace garden, and I’ve even managed to propagate this cultivar easily from cuttings, so have a few plants around the property. BUT it’s the classical example of a hybrid flower which appeals to humans,  whilst being an insect free zone. So in one locatiom we have it scrambling over a wall, and largely hiding the herringbone stems of Cotoneaster horizontalis. The wasps, bumbles and honeybees descend in hordes onto the Cotoneaster’s tiny and insignificant flowers which open a couple of weeks after the Clematis flowers and are hidden amongst the splendid Clematis, and the terrace hums. Human visitors only have eyes for “Broughton Star” … 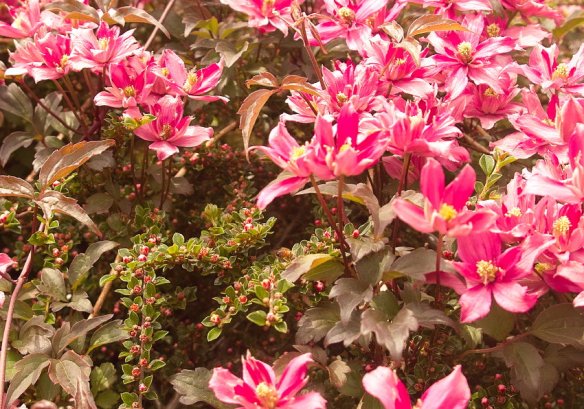 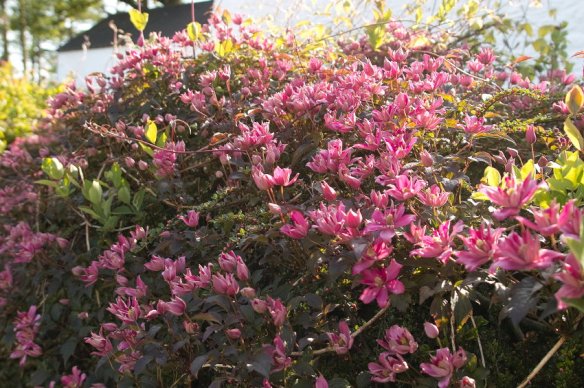 3: Meconopsis cambrica – The Welsh Poppy. Similar to Aquilegia, a vigorous seeding native, short lived perennial with big insect appeal. Lovely yellow, and occasionally orange, papery flowers. If you can be bothered to dead head them, it extends the season, but you usually get at least 8 weeks of flowers from it. Scatter the seed anywhere, and see where it pops up. It does need bare surfaces and spaces though to germinate. You have little control over where it appears, but if sown in profusion amongst other plants it never dominates. I eventually learned a lesson and became a more relaxed gardener – I used to rip up all the orange forms, but I never won the battle and now relish the informality of where they appear. They also look particularly lovely flowering amongst Bowles’ Golden Sedge, which narrowly missed this rather arbitrary cut, of favourite plants… 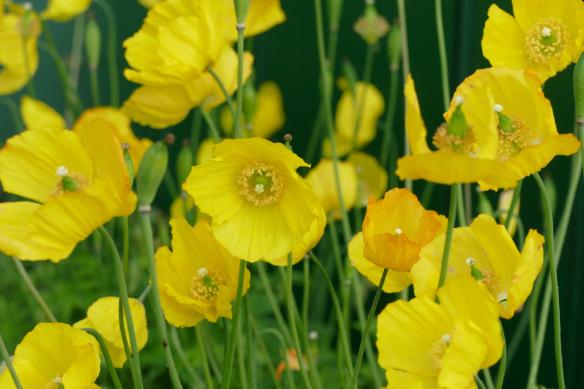 4: Silene uniflora – Sea Campion. Another native plant which we love. A fairly long lived perennial, which usually flowers continuously from late April through to September/October. Grey green foliage, we always grow it from scattered seed, which survives in the poorest conditions, in at least sunshine for part of the day. For example amongst the cobbles along our front path, tucked right up against the white washed cottage wall.. A coastal native it’s a brilliant nectar source for many moths, bumblebees and other insects, and the foliage survives through all but the harshest winter months. Scatter some of this along the fringes of all those paved urban front gardens and it would work wonders for our native insects. 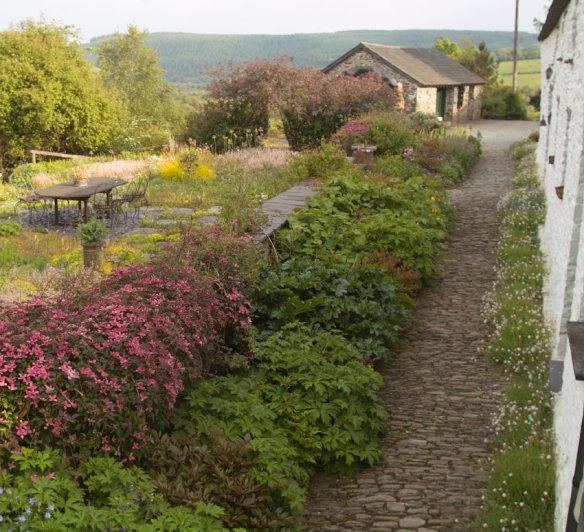 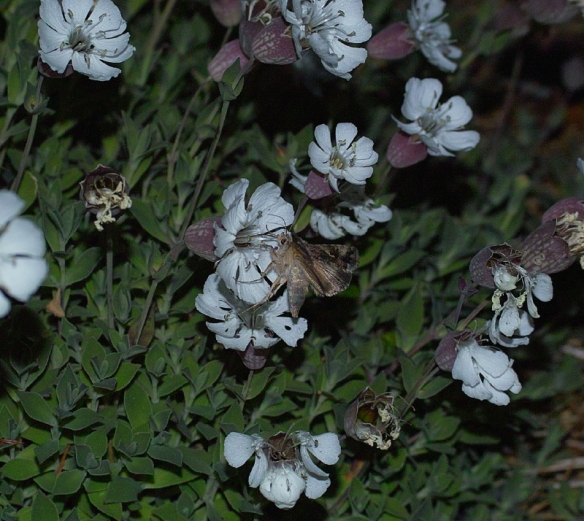 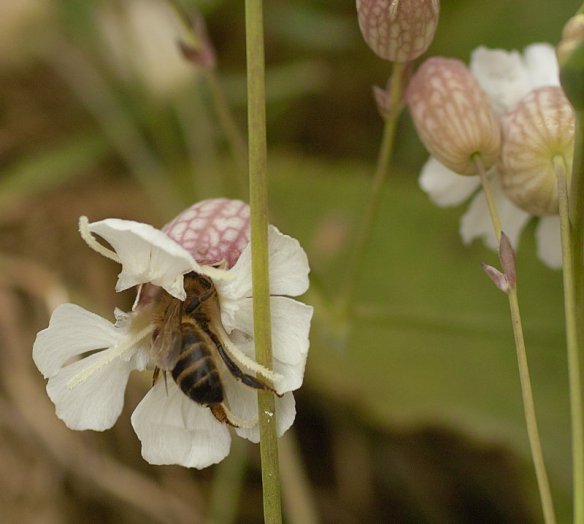 5: Saxifraga urbium – London Pride. A common plant but brilliant ground cover. Bulbs can grow through it, and it co exists well with Purple Bugle, Ajuga reptans ” Burgundy Glow”, which is another favourite, but reaches the end of its period of flowering a little later in early June. In sultry weather, the tiny Saxifrage flowers are often covered with honey bees, red faced from the Saxifrage’s pollen, and sometimes smaller bumblebees can hang onto the tiny flowers too. It does just as well in dry shade as full sun, with us here… 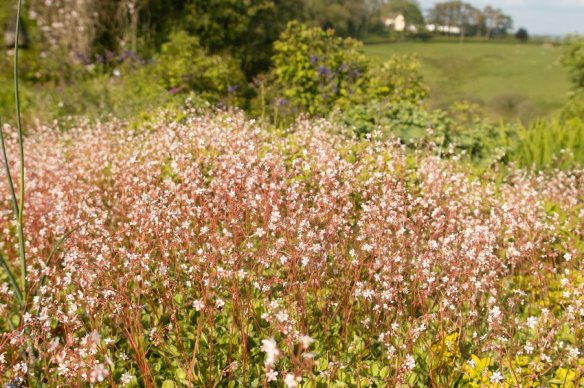 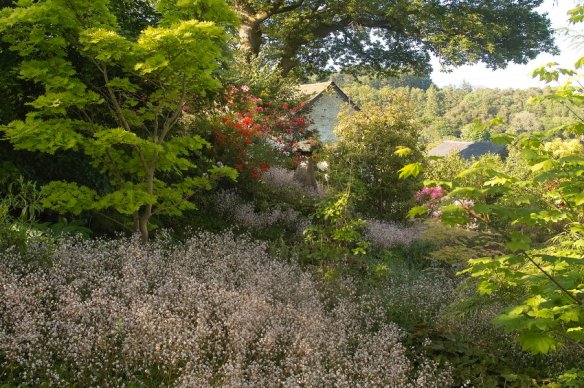 6: Oxalis oregana f. smalliana. Another wonderful ground cover for a shady spot. A native of North American redwood forests, it spreads fairly slowly with us beneath mature Larch trees, and coexists with our native wood sorrel. But as you can see, the leaves and pink flowers are at least twice the size, and it seems capable of growing right up to the base of tree or shrub bases, giving flowers over about 2 months, and attractive leaves throughout the season. Cyclamen hederifolium looks good with it, and the purple leaves and flowers of Labradorean Violets. 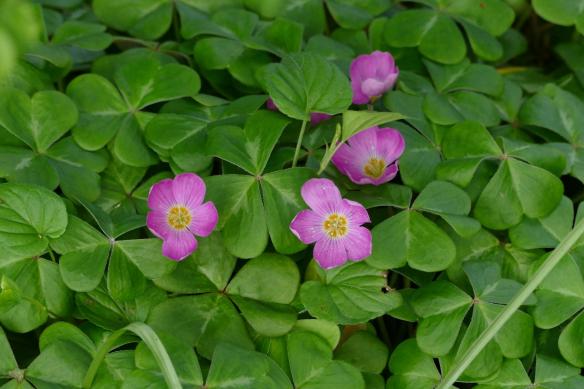 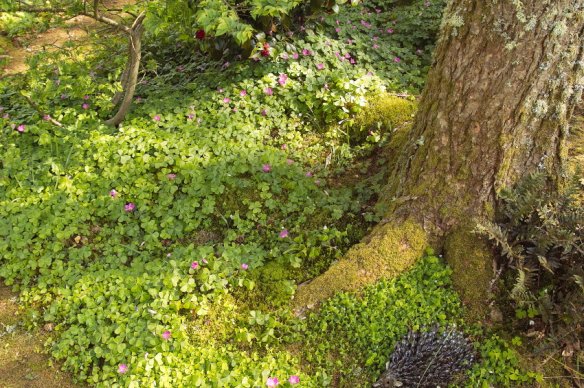 7: Acer palmatum “Linearilobum”. We grow a few Acers, and late May is one of their best seasons as the new leaves emerge. Siting many of them in a sheltered location beneath mature Larch has the effect of slowing their development, and also usually sparing them the damage of late spring frosts. Many have been grown from seed, but this bought in medium sized cultivar, is one with a lovely seasonally changing leaf colour, and attractive shape. And like most Acer palmatum, in November it gives a fiery finale before briefly carpeting the ground with fallen leaf colour. 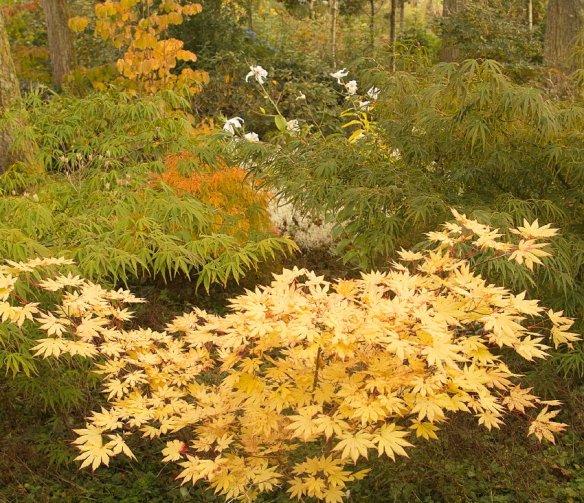 8: Hesperis matronalis var. albiflora – Dame’s Violet/Sweet Rocket. A short lived native perennial or biennial, which we grow as its white form. It fulfils the role of White Honesty (Lunaria annua) earlier in the year, by adding white flowers amongst more highly coloured plants and the diverse greens of late spring foliage. In addition it has a wonderful scent and if grown in sunny spots is a great nectar source for many insects. But it performs just as well in part shade. Unfortunately it doesn’t seed as prolifically as Honesty, and seedlings are a bit prone to slug damage, so it may be best to sow in pots or a nursery bed and plant out as small plants. 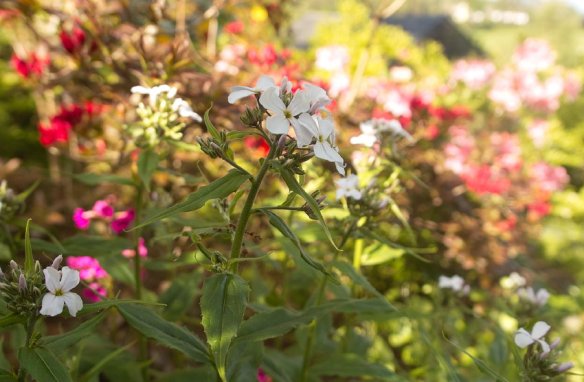 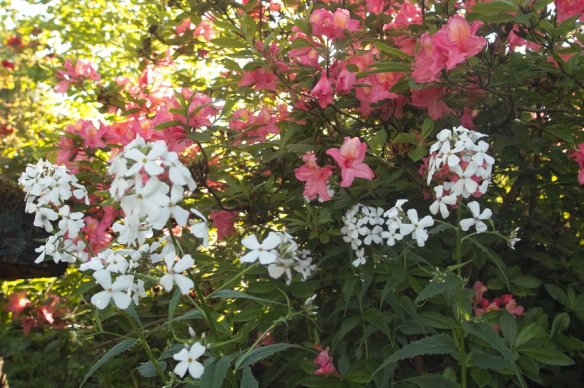 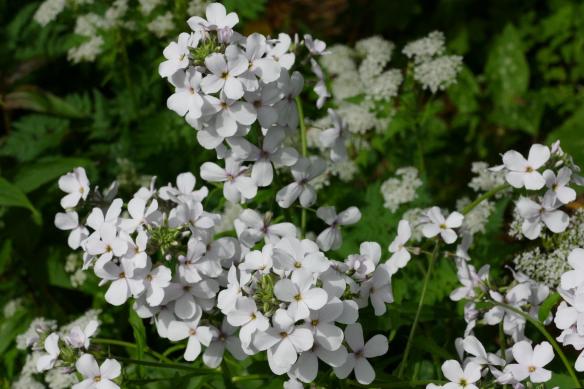 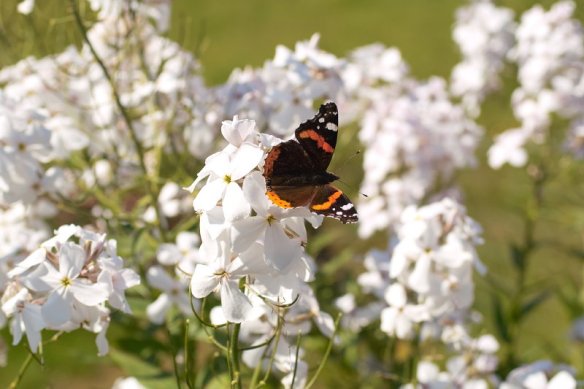 9: Rhododendron (Deciduous Azalea) “Persil”. Mid May to early June is the 3 week season for deciduous scented Azaleas here. This is a white, with yellow throat, form of the medium sized shrub, which flowers reliably and has a good scent. Always enjoyed when in flower, and a more modest shrub than some of the flamboyant colours either side of it. A very early garden experience for us both was a holiday nearly 30 years ago which took in a visit to Lady Anne Palmer’s garden at Rosemoor in May, before it was gifted to the RHS. A bank of scented Azaleas in front of the house there left a lasting impression, and now we have our own mini version… 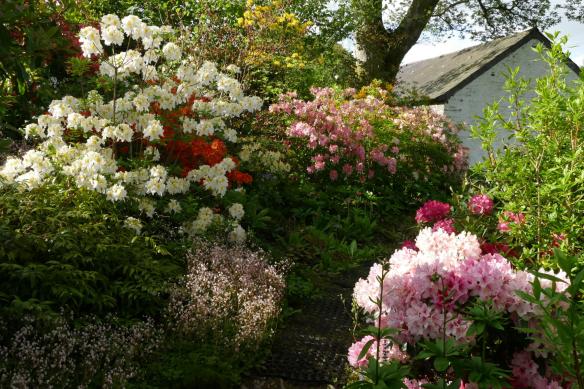 10: Primula japonica. We grew all these Primula from seed and think it’s a form of P. japonica. It’s a stunning magenta colour and flowers before any of our other Primulas, reaching its peak at the end of May. It produces masses of seed, but individual plants are fairly short lived, and it seems to move away from many areas where it has been growing prolifically after a few years, whilst popping up in many other areas of the garden. It also has minimal larger insect appeal, but is still a firm and reliable favourite, and a plant which glows whatever the weather. We feel lucky that it grows in many ways like a weed in our clearly favourable damp upland conditions. 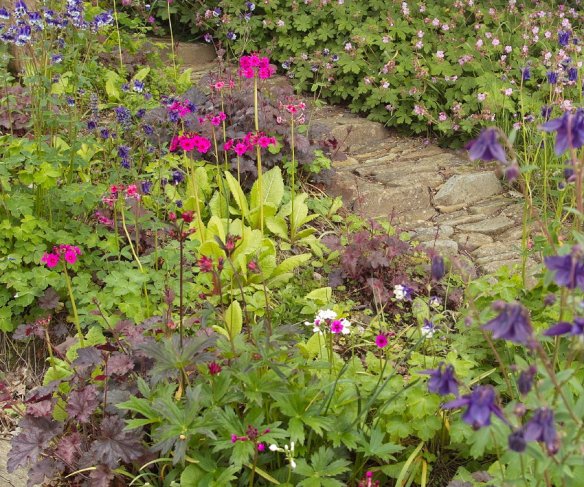 11: Valeriana pyrenaica – Pyrenean Valerian. Quite a recent addition to the garden it has a valuable role in giving colour, height and scent over a 3 to 4 week period, and associates well with Aquilegia. It’s visited by honeybees and some bumbles, and is slug resistant. The only caveats are that it seeds prolifically, which can be blown about like fine dandelion seed and so it’s probably best to dead head many of the plants after flowering. It also becomes quite a wide based plant, so has potential to shade out smaller early spring bulbs. Our way of managing this is to treat it as we do foxgloves, and cut back any surviving leaves to the crown, around the turn of the year. But in damp part shade it’s a great plant for us when used in drifts, and any unwanted seedling plants are easy to pull up, or move around. 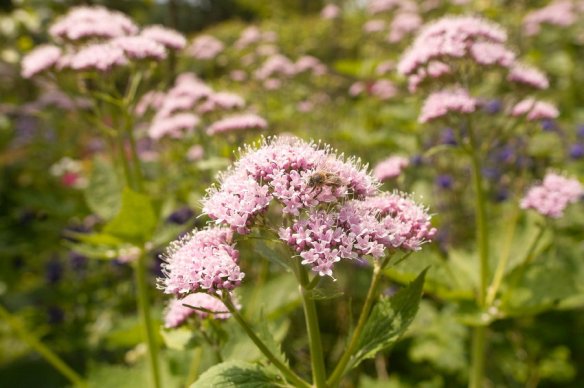 12: Saxifraga fortunei “Rubrifolia”. One of our favourite plants throughout the year. Many visitors think that it’s a Heuchera when seen at this time of the year. The foliage looks attractive, with olive green upper leaf surfaces with red/purple undersides. It’s very effective ground cover, and emerges late enough to give very early spring bulbs a chance if planted amongst it. Here it survives in quite deep shade, or full sun, provided it doesn’t get really dry (rarely a problem for us!). So we enjoy it for most of the year…and then its star turn occurs in late September into October, when it explodes into flower spikes with thousands of tiny white Saxifrage type flowers. It’s easy to propagate by pulling apart larger plants in the autumn, and replanting the smaller pieces. I’ve also found that in those occasional years where first frosts arrive late, and seed capsules have a chance to mature before the frost withers them, cutting the seed heads off and scattering them over the ground in big bags where old varieties of daffodils emerge in spring, creates favourable conditions for seed germination, and growth. Honeybees like collecting the red pollen too.