May 2020 will be remembered as another wonderful and exceptionally sunny spring month, coming after the third sunniest April ever recorded in Wales.

However we did see a little grey weather and rain which was really welcome over the first three days, but coming on days which still had wonderful breaks in cloud cover, and special light. 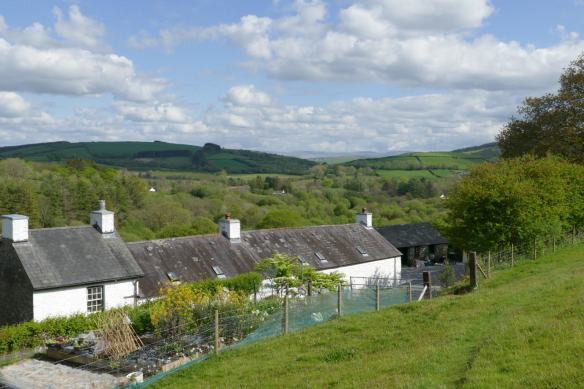 With much sunny weather, generally light winds, and very little rain, controlled watering of main bulb areas in the terrace, pots, tubs and the tyre and vegetable area have been twice a day features of life, for many weeks now. 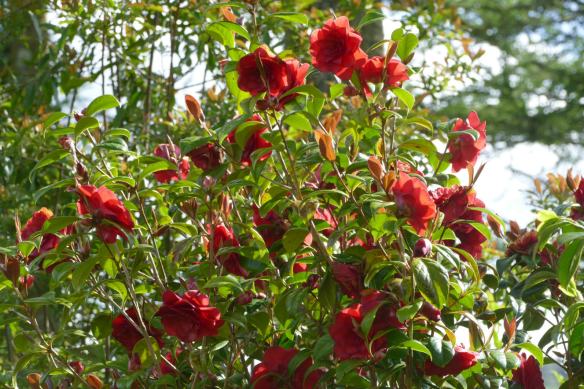 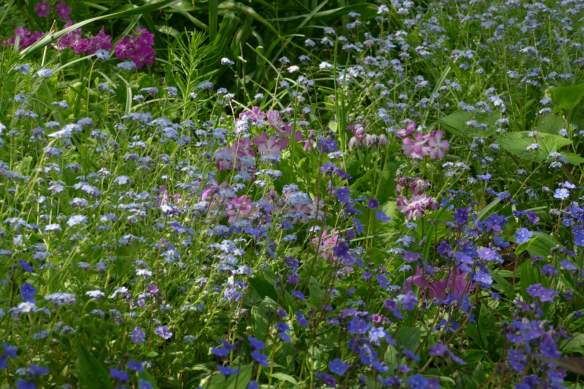 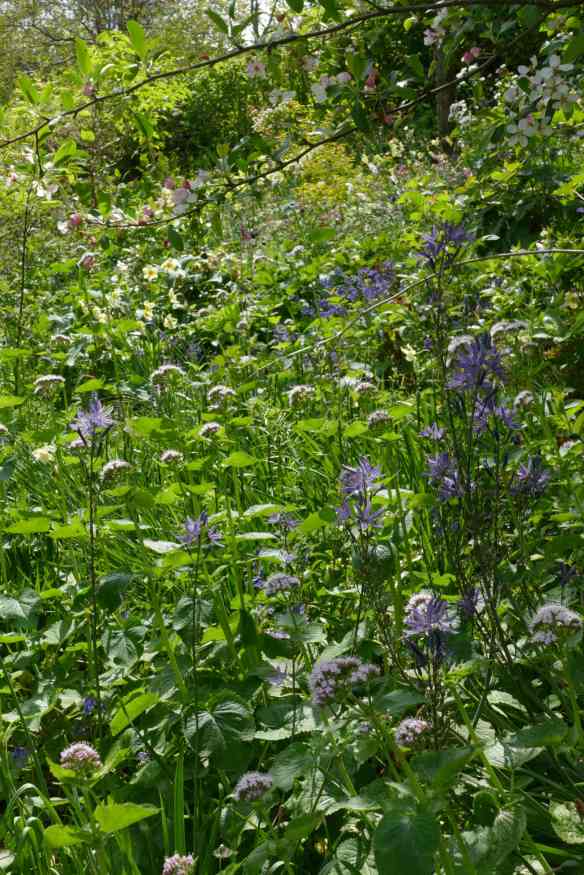 But early May is always a time when the garden changes daily, so no excuses for huge numbers of pictures to illustrate the progression in this very special year. 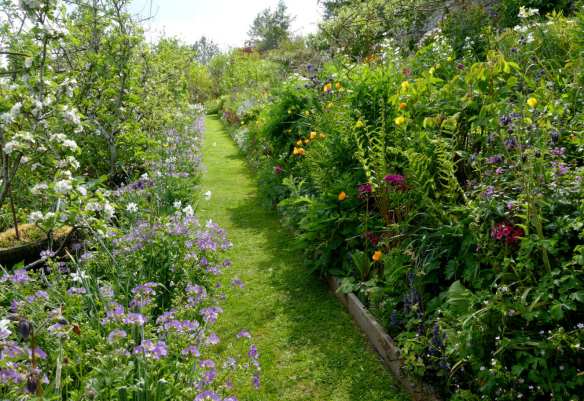 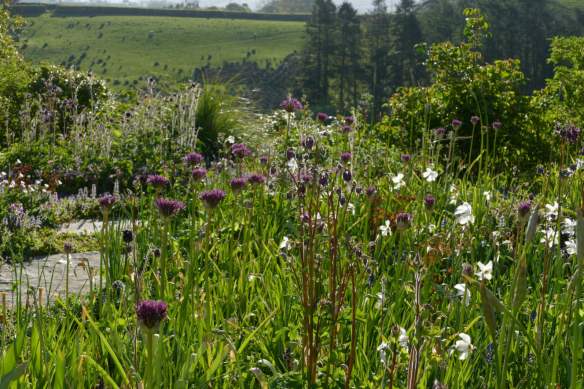 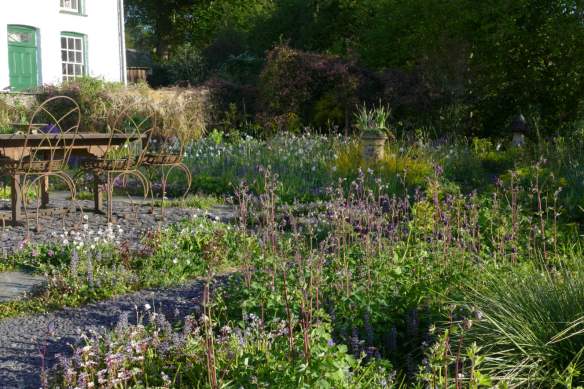 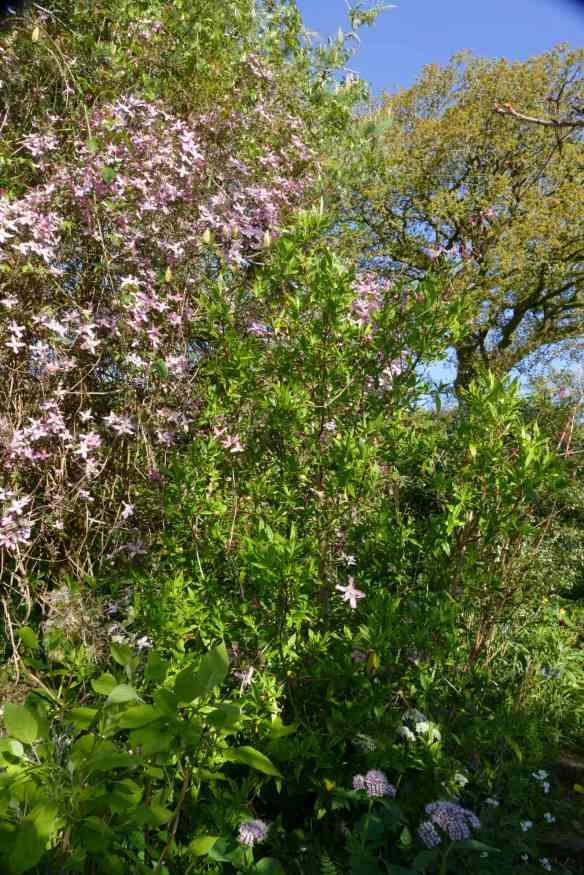 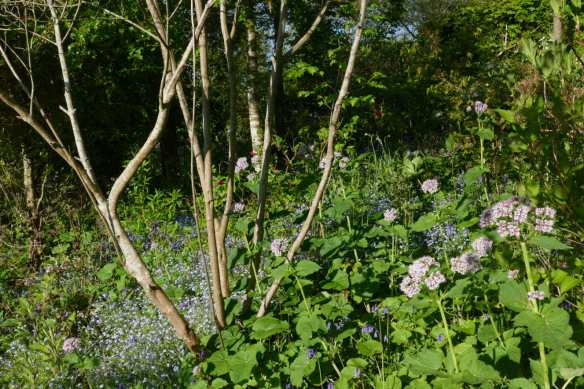 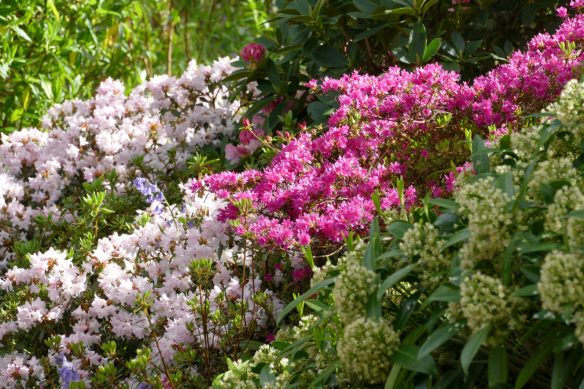 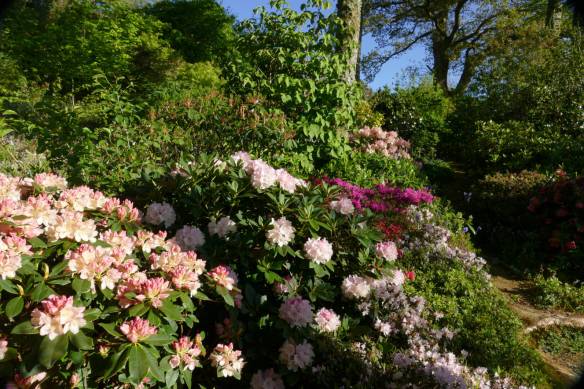 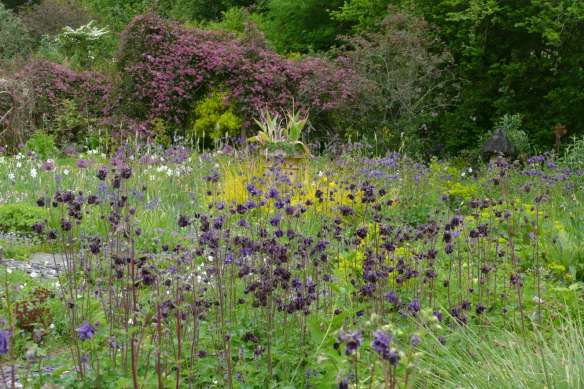 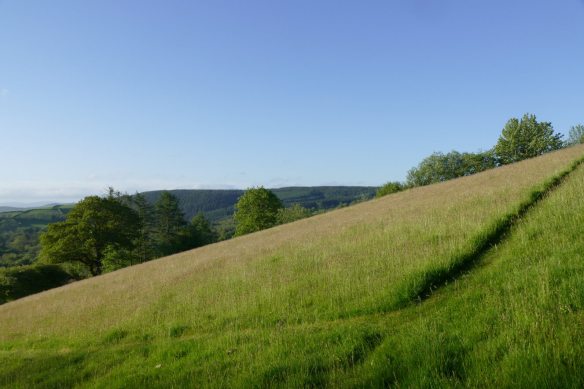 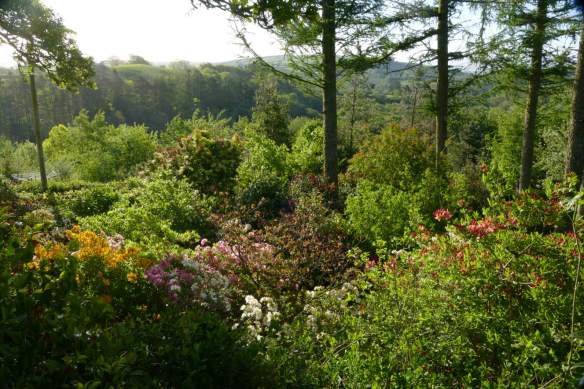 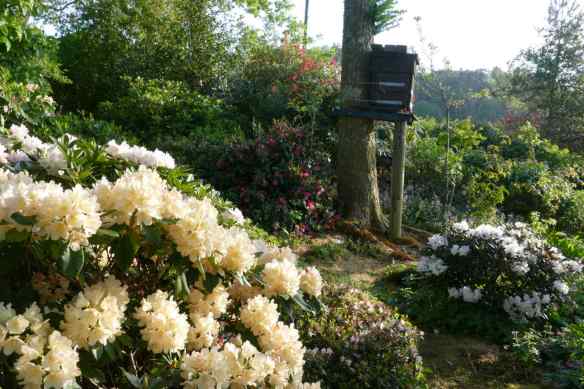 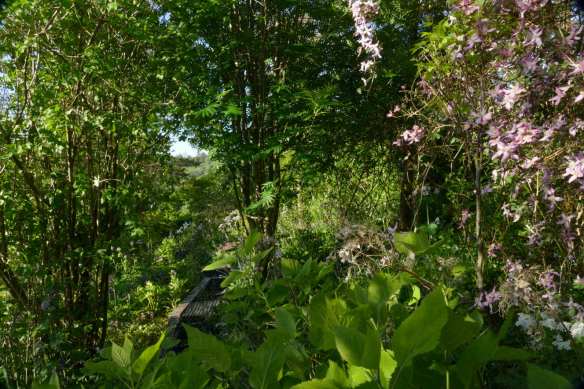 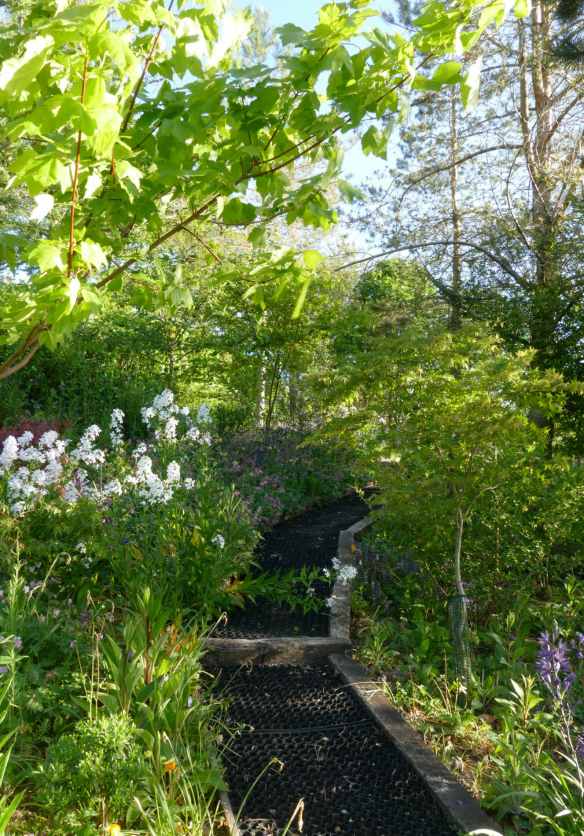 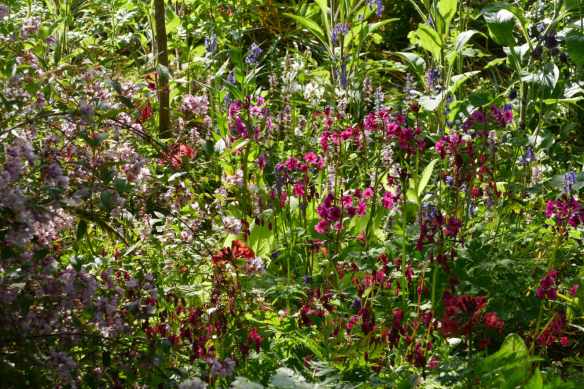 With home grown produce a bigger priority in these lock down times, Fiona followed on from finishing her rabbit proof fence around the veg area, with making stakes and hoops so that most beds can potentially have some sort of enviromesh covering. An invaluable and significant effort, which will save time, energy and hopefully crops, in the future. 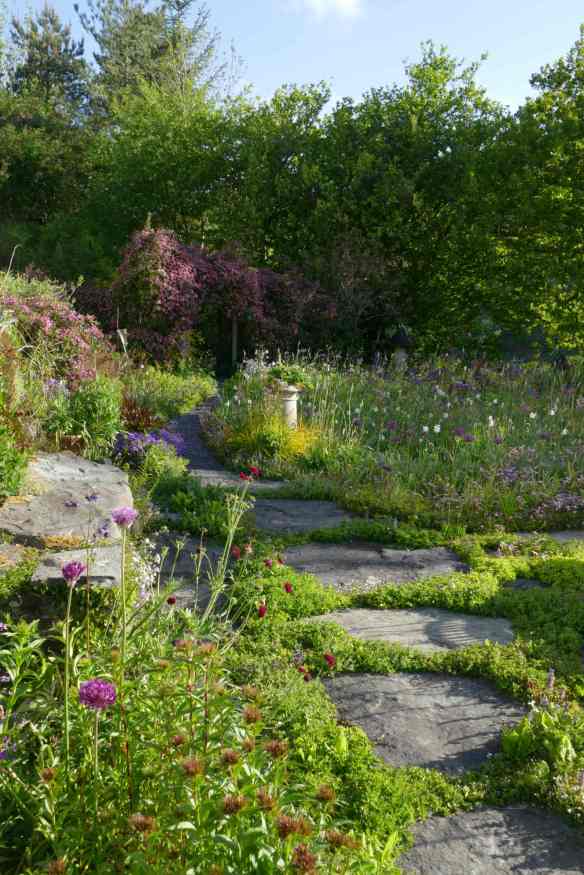 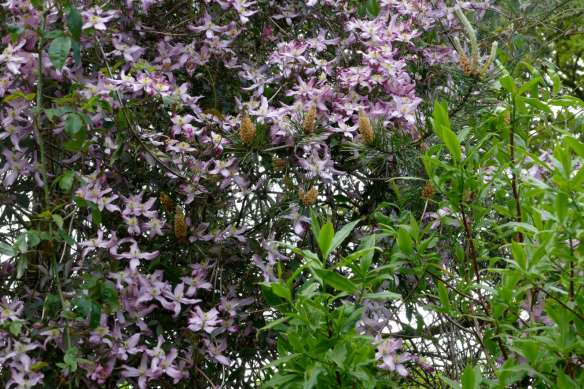 Friday 8th saw a rare, brief and slow moving thunderstorm with continuous thunder rumbles, but little lightning and sadly little rain, followed by the hottest day of the year, with temperatures near 20 deg. C. Finding a lot of bees fanning at the butter churn hive entrance, I removed the entrance restriction which has been on most of this year, only to have temperatures plunge the following day when the winds picked up and swung to the North and East. But the bees seem remarkably resilient…

These conditions continued for a few days, with more glorious sunshine, but biting winds and a frost to minus 3 on the night of the 11th/12th which caused significant damage to tender plants in spite of protection, followed by frosts on the following 3 nights..

In spite of some protection of the tender vegetables, minus 3 was too much, and clobbered many tender plants…

However in a fortnight most were recovering…

Much time has been spent over the last 7 weeks of lockdown, in making video recordings with the aim of making another film, 10 years on from “Epiphany in Translation”, to record the exceptional soundscape of the garden and landscape during this uniquely quiet period.

There have been many wonderful sights and sounds… 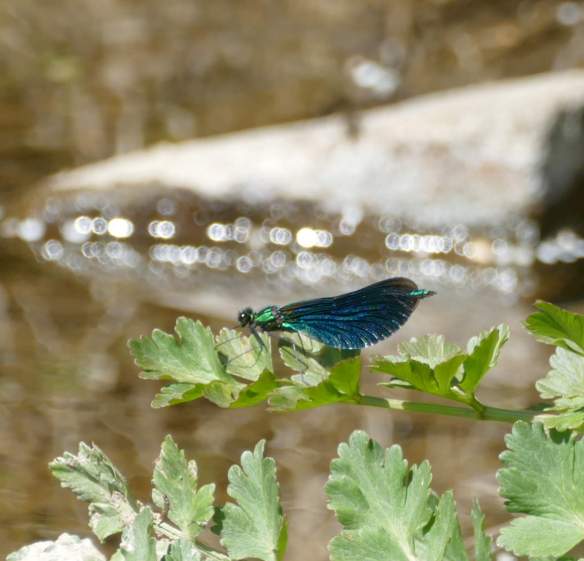 A particular thrill was finding that we have finally seemed to have encouraged Common Blue Butterflies in our upper hay meadow and around the garden, thanks to Black Meddick and Bird’s-foot Trefoil, and have a small breeding colony. Two mating pairs were seen on sunny days, and up to 7 individuals at one time. 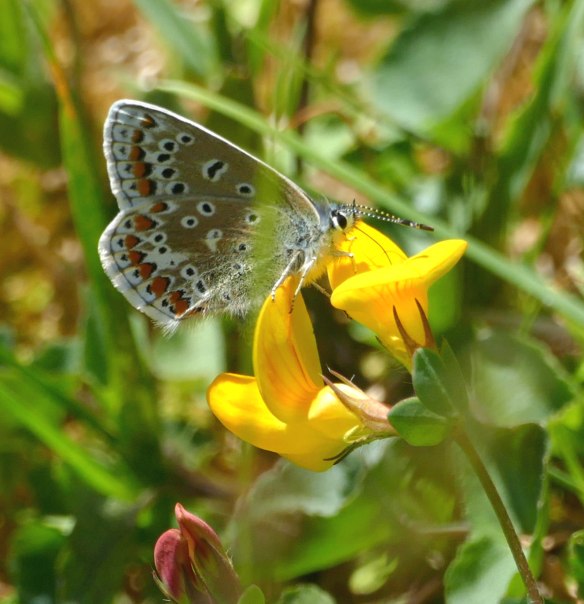 With the frosts out of the way, the weather returned to an extended run to the end of the month of glorious nearly entirely clear blue skies, and rising temperatures. Plants and pasture began to suffer and scorch. Drones cleaned their faces briefly before leaving the butter churn hive to fly to drone congregation areas early afternoon in a tremendous buzzy din, for 4 days at the end of the month, below.

Drones cleaned their faces briefly before leaving the butter churn hive to fly to drone congregation areas early afternoon in a tremendous buzzy din, for 4 days at the end of the month, above.

I had the chance to acquire another bee swarm to install in a hive late in the month, and we made our first light hay cut and harvested 24 big bags of hay from the periphery of the upper hay meadow and Western fringe of the lower meadow, in perfect hay drying conditions. 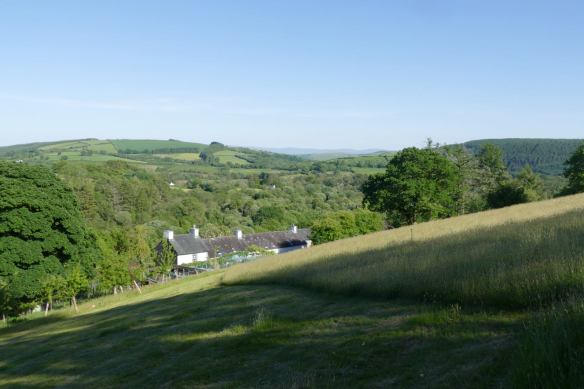 The garden was finally looking a little tired towards the end of the month, with a run of days of over 23 degrees C temperatures, moderate winds and blazing sun, and water supply was becoming more of a concern. 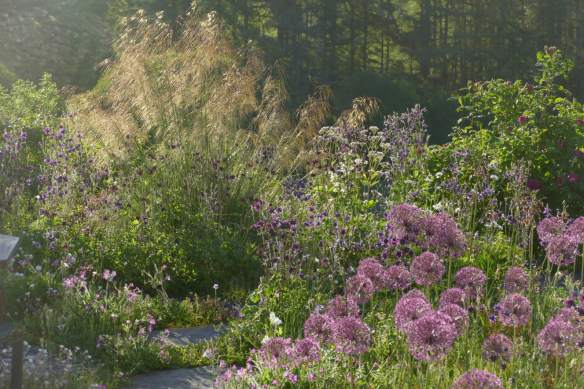 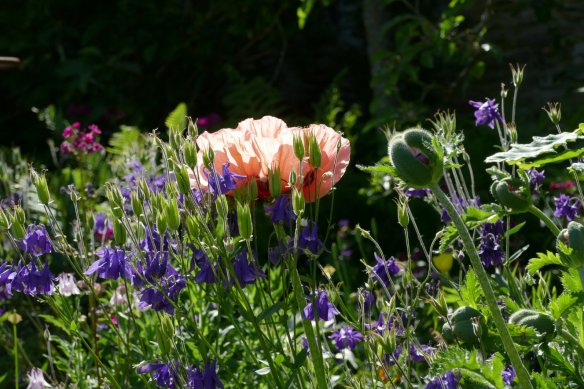 The rainfall total for the month of just 23.6 mm and a PV reading of 609 KWH for the first time ever shows how exceptional a month it was. With a peak output of over 3.8 KW during the month, from a system installed over 10 years ago that was designed to have a maximum output of that figure, that’s quite an achievement, and endorsement of PV generation. 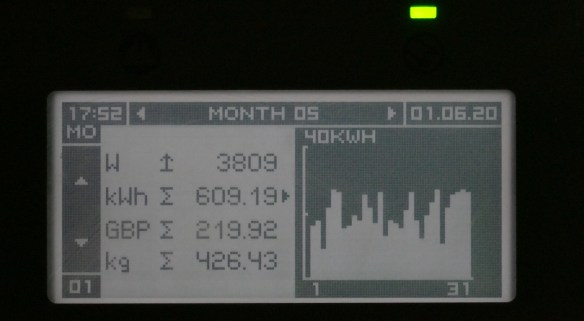 The Met Office confirmed that it has been the sunniest spring since records began in 1929, if not the warmest, and certainly their maps for our part of West Wales confirm the huge variation this year from rolling 20 year “average” readings. And one of the driest springs too.