Below is the list of our favourite plants in the garden in the first half of January 2017. The idea of recording these came to me in mid 2016, so won’t be completed until later this year. I don’t tend to repeat plants that have featured in the previous fortnight, so it’s an attempt to show how there is always something new in the garden to tempt us out, whatever the weather. In early January many of December’s stalwarts are even better now, like early snowdrops and Cyclamen coum, so do have a look at the last 2 Plant Palettes. But there are now waves of new flowers appearing quite regularly. Spring is on its way. Well at least that’s what all this new activity is telling us. And the nadir of late November when flowers are few and far between seems a very long time ago.

1: Daphne bholua Jaqueline Postill. This would possibly be another of our top 12 plants for the whole year. Originally we’d heard about its famed perfume and found 2 scrawny plants lurking at the back of a local nursery’s polytunnel, for about a fiver apiece. We planted them in our amphitheatre area, and they sulked so ( and all the experts say you’re not meant to do this with Daphnes) we moved them to 2 locations beneath the mature Larch on a more South facing slope. 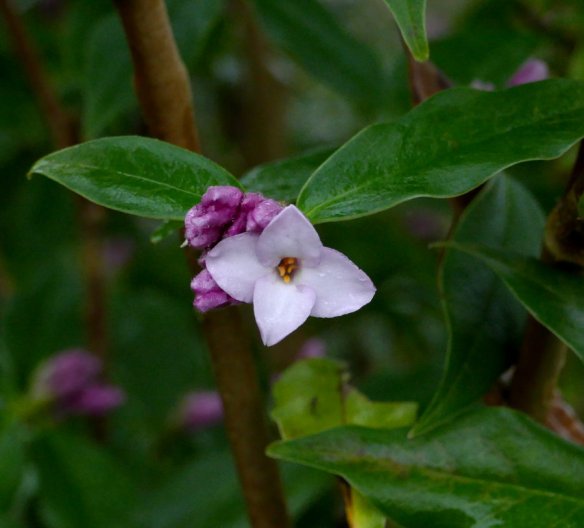 What we didn’t know at the time was that they were on their own roots (probably originally micro-propagated). Gradually they both grew, flowered and we started to appreciate the magic perfume. Some years, like 2015, the flowers opened in early December, sometimes not until mid February. This year we had a month of watching the rose lilac buds, until the scent fills the air for yards away from just the very first few opened buds. How powerful is that?

But now there are hundreds of buds on shrubby thickets 7 feet tall. And better still they like our conditions so much that they run, and pop up new shoots every foot or so, rather like our native nuisance hedgerow wild cherries. So now we have 7 or 8 developing thickets around the garden which ensure that in most parts of the garden, whatever the wind direction, you experience that sublime scent. It’s only partially evergreen and usually sheds most of the leaves after flowering, which often continues into early April. A star plant. 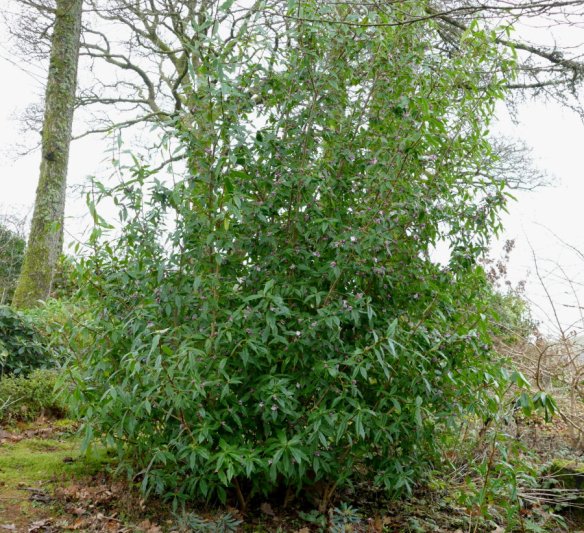 2: Hamamelis “Nina” . This is the first Witch Hazel which we bought, and frankly is a little too bright a yellow for me. However in early January any flowers like this are a bonus and they do look good set off by the glossy leaves of a white Camellia… 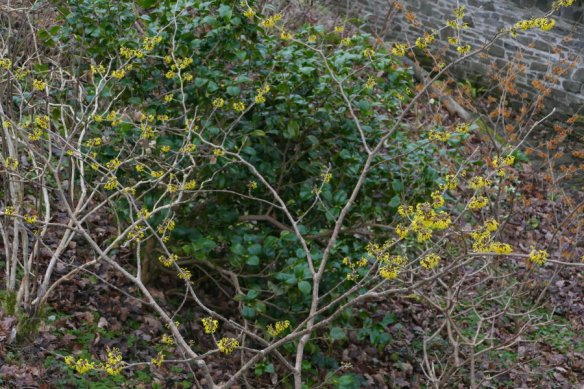 … or the moss covered bank and Oak tree trunk. But Hamamelis needs years to come into their own – most of ours are now over 7 years old…

3: Hamamelis ” Rubin”. A more appealing Witch Hazel which also has a better form than “Nina”. I’ve been able to create an open goblet by tipping back all the shoots every year just after flowering, and cutting out any that cross the centre of the plant.

Not the earliest to flower, and the flowers are a little smaller than say H. ” Robert”, but still a great plant to have for early January, and like the other Hamamelis the boost is that at this time of the year, the flowers often last for 6 to 8 weeks.

4: Galanthus Atkinsii This was the snowdrop which got me going as a galanthophile, I originally bought a few from Broadleigh bulbs, grew them in a raised bed in our Bristol garden and then moved them down to Wales before we relocated permanently. They existed between the apple’s tyre pillars, and eventually I got round to shifting them into other areas of the garden.

Consistently one of our earliest snowdrops to flower, they’re tall, big elegant, recover well from frosts and because they’re sterile, the flowers usually last at least 6 weeks.

The sterility issue means that to create drifts you have to be prepared to split and divide them every 3 years or so – always a wrench to do, but given snowdrops’, like this one, insistence on multiplying at least as well as the Fibonacci progression predicts, just a few bulbs initially become hundreds in a decade…

5: Galanthus “Reverend Hailstone” . A more recent snowdrop in our collection, originating from the Anglesey Abbey gardens in Cambridgehsire, this is another very early, large flowered, and erect form.

Possibly not as vigorous as “Atkinsii”, it nevertheless is bulking up, and I like the way that the spathe curves back as the flower enlarges. 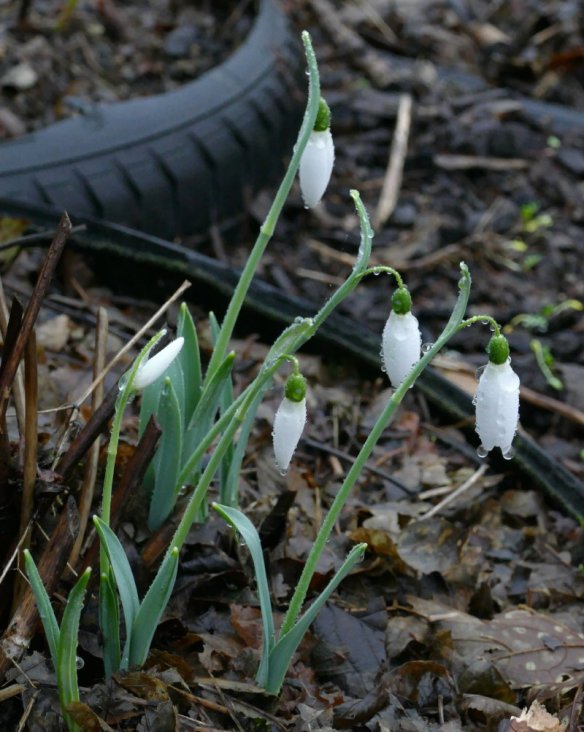 6:  Hamamelis “Diane”. Another red flowered Witch Hazel, usually emerging around the time of “Rubin”. It looks great next to the orange hues of H. “Robert”, and like “Robert” also has the merit of interesting autumn leaf colour tints, in some years. 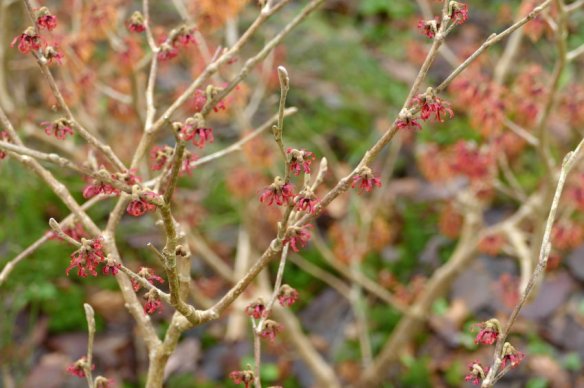 7: Daphne bholua Darjeeling. Another lovely scented Daphne bholua, very similar to  D. “Jacqueline Postill”, but it tends to hang onto its leaves better after flowering, and also doesn’t seem to grow quite as tall – more like 4 to 5 feet. 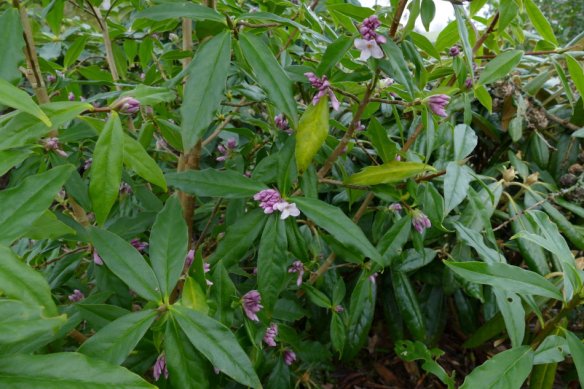 However being again bought, by chance, growing on its own roots, it is also running and suckering so in future we should be able to have a few more plants about the garden for free. 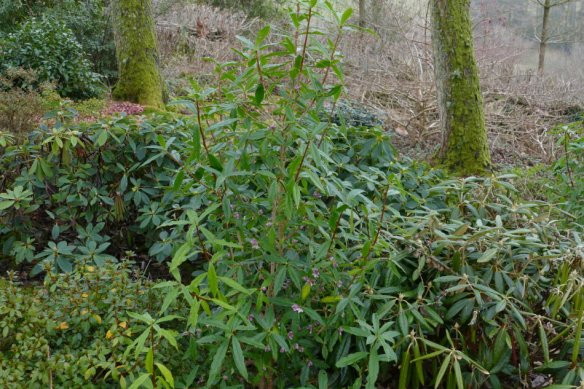 8: Daphne “Spring Herald”. This is a grafted plant which again flowers at a similar time to the two Daphne bholua’s listed above. The flower clusters are almost pure white, and the scent different, but equally appealing. It is a hybrid between D. bholua and D. acutiloba

It forms a smaller bush, than the bholuas, and of course being grafted it won’t generate thickets and will have a more limited life, as most Daphnes tend to have.

9: Galanthus rizehensis  An attractive snowdrop species, (which growing, as many of our named snowdrops do in our double retyred matrix garden facing East ) has been in full flower by the middle of January in the last 2 seasons. Interestingly Tom Mitchell’s excellent “Revolution snowdrop blog”,(click here),  illustrates this flowering in its native range in North east Turkey in the middle of March 2016. 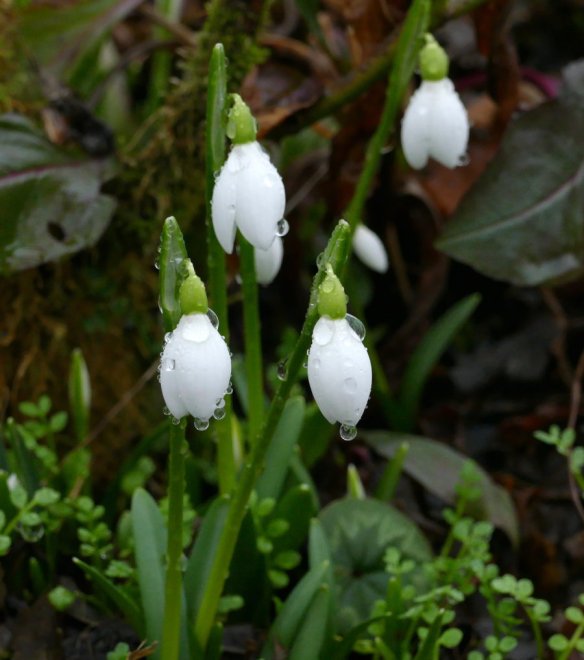 Quite modestly sized flowers, but prolific and it self seeds, and also has very attractive, shortish, and quite quite glossy, blue-green leaves.

10: Galanthus woronowii Another species snowdrop similar to G. rizehensis, which flowers slightly earlier with us. It  seems to have more of a yellow green hue to the developing ovaries, and wider, bright green, glossy leaves and seems just as prolific in our conditions. 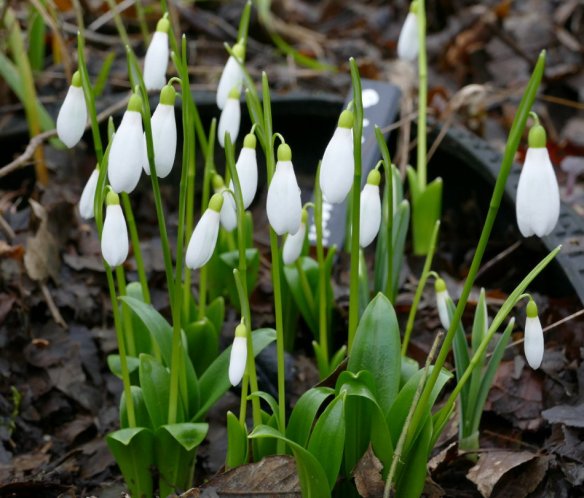 11: Moss.  In our copse garden, a very early idea which was key to its development was to take advantage of the mossy sub-layer which was obvious beneath the weak, rank long grass which covered the ground beneath the mature Larch trees. Painting the whole area on hands and knees with glyphosate using a wallpaper brush, enabled us to kill the grass, but leave the moss layer intact.

A lot of hand weeding later and mossy paths now wind through this part of the garden. There are several forms, which I’m afraid I haven’t (yet?) got round to identifying which complement each other in form and colour of green.

But this clump/tuft forming variety is a favourite, in part because this one is spared in the at least annual event, when blackbirds rip the moss up searching for grubs. You can also take a lawn mower over it, to keep the paths open.

12: Ilex elegantissima. I think that this is the correct name for this holly – as mentioned in other “palette pages”, several of our hollies got moved and possibly muddled years ago before we recorded things in more detail. This is a male form, and so produces no berries, but it’s vigorous and easy for me to shape into one of my holly mushrooms, though it will take a couple more years to be how I’d like it. 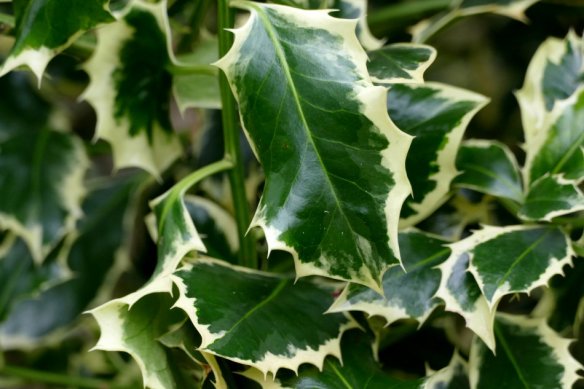 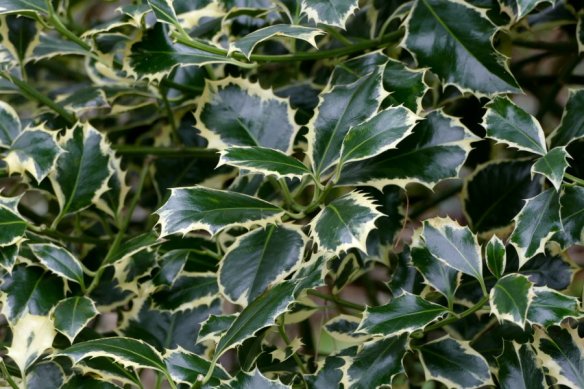