A new month, and more importantly a new decade, and I wonder what the weather here, and indeed the garden, will look like in another 10 years? I’d not started this website and blog in 2010, and the garden has changed hugely over that time.

So too has the weather, and milder grey wet winter months seem more of a feature as the years have gone by.

January 2020 has started in this vein, with typically low light levels, some rain onto sodden ground most days, and limited opportunities for photography. These are 3 views from January 2010, for comparison… 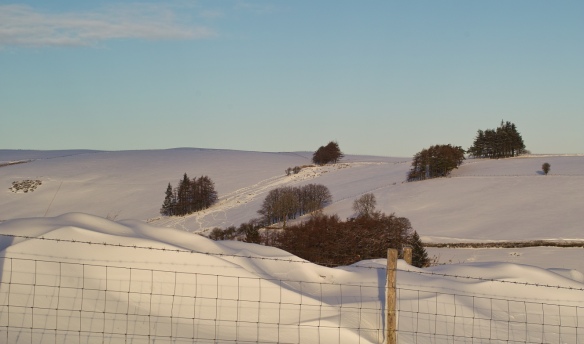 Thanks goodness for the snowdrop collection here, which gets me out even in the gloomiest weather to record first flower opening times.

Even though their emergence is about 10 days later than in the previous 2 years. On January 1st 2020, we had 30 different cultivar flowers showing, if not open.

Perhaps a little nerdy, but detailed recording does show how for many snowdrops their flowering season is amazingly consistent when considered relative to their peers.

This year a new addition, G. “Watlington Greenman“, only acquired in 2019, is looking very promising, not only flowering early with several bulbs already hinting at future vigour, but also it seems surprisingly eager to open its petals even under very grey damp conditions.

This will happen with other snowdrops, but usually only when temperatures top about 10 degrees C, which happened here on January 7th, even under all day drizzle and gloom. G . “Mrs.Macnamara” below. 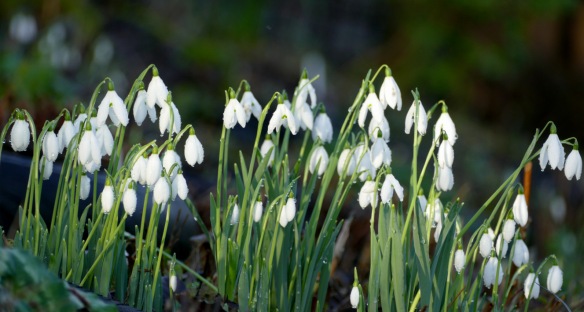 The other thing to record is that this year we’ve removed the sheep from the upper hay meadow by Epiphany, January 6th, to allow any early spring bulb shoots, like Crocus tommasinianus, or Camassia, to escape nibbling.

The ewes have only eaten their way through about a third of the hay in the upper hay shed by now, but have taken the aftermath growth down reasonably well. Perhaps next year we should put them back into this field in mid November, a little earlier than late November 2019.

The rest of the garden looks tidy, but lacking much interest as the Cyclamen coum are also a little late into bloom this year. 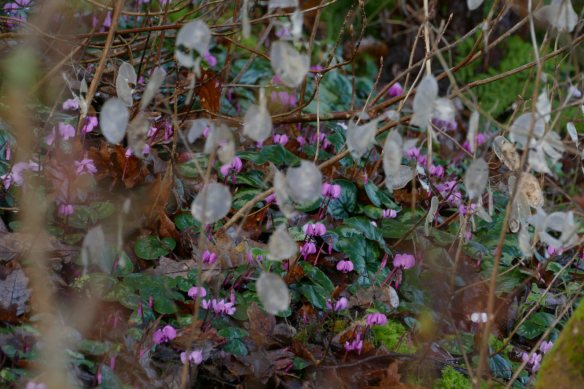 However at least the Daphne bholua are going to have another great year, and their potent sublime scent is beginning to fill the air.

On January 9th on another grey, still, and quite mild day, I spotted a single honey bee inside a Mrs Macnamara flower, on my morning snowdrop check walk.

Drizzle returned shortly afterwards, but the following day was sunny, still, and almost as warm. At 10.30 am I was waiting by the snowdrops.

A single bee was foraging and quite quickly flew off. 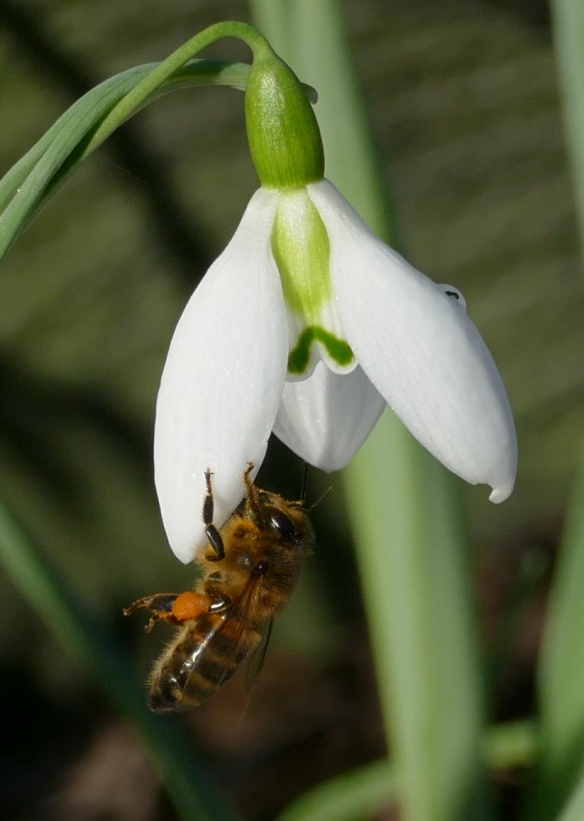 Within 10 minutes it was back, and very shortly joined by many others, around the garden.

No need for me to hand pollinate the early snowdrops in 2020 any more after this short session! 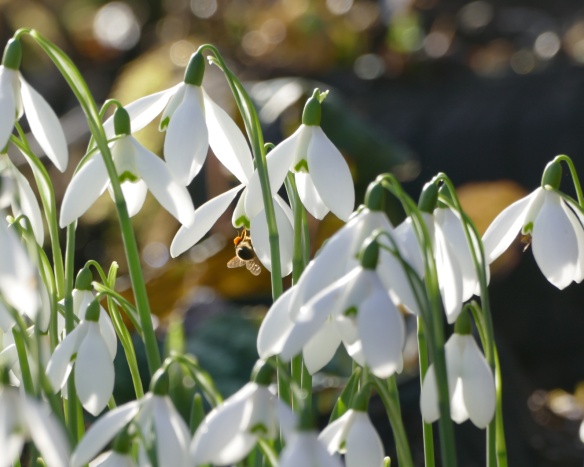 This was a brief foraging chance for them. Rain returned and then the second storm of the season “Brendan” powered in on January 13 th/14th. Bright moments were short lived… 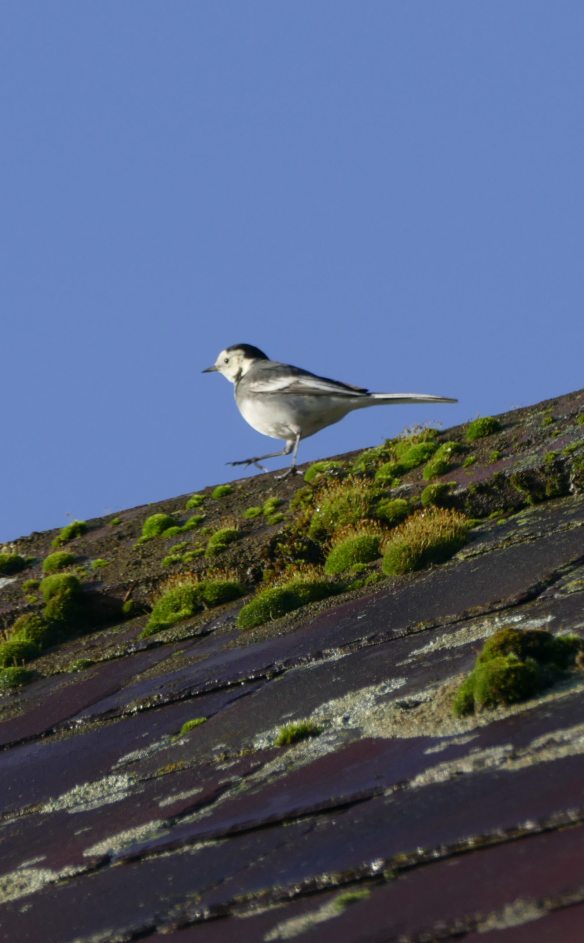 The rest of the month continued in fairly mild, wet and grey mode although by chance two glorious sunny days coincided with us away at the coast for a mini break. 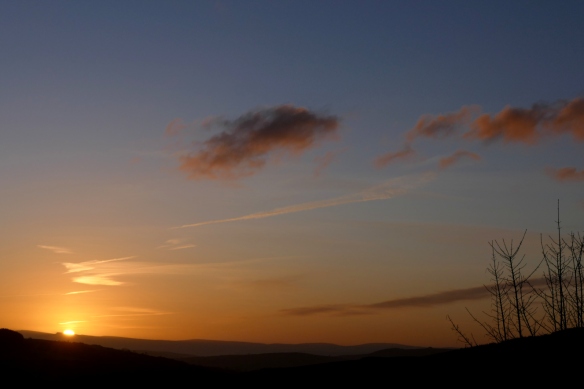 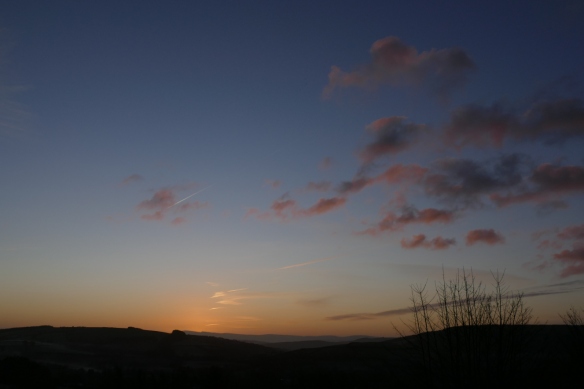 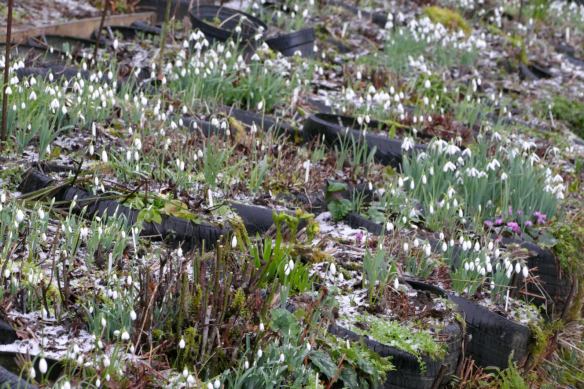 The Daphnes have been sublime this month… 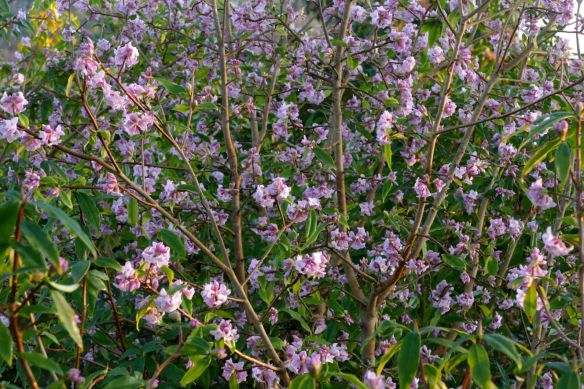 And on another day, the 22nd, when the honeybees from the butterchurn swarm hive were very active in front of the hive and out and about, there was obvious bringing back of the Daphne’s bright orange pollen. 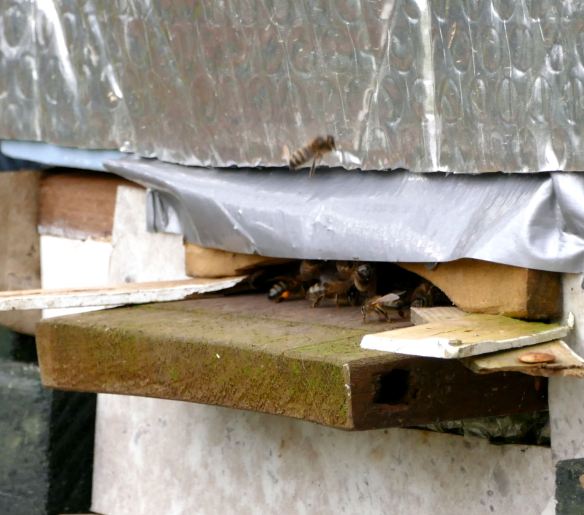 And at last the Cyclamen coum and other spring bulbs began to light up the scene en masse and dispel those winter blues. 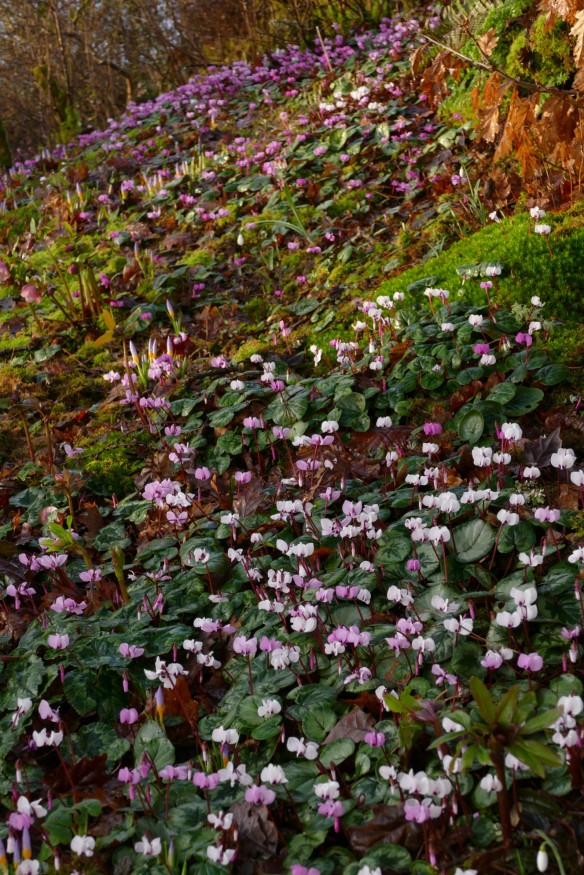 Towards the end of the month on the 28th, we had another cold day, with hail showers to bring a wintry feel to the garden… 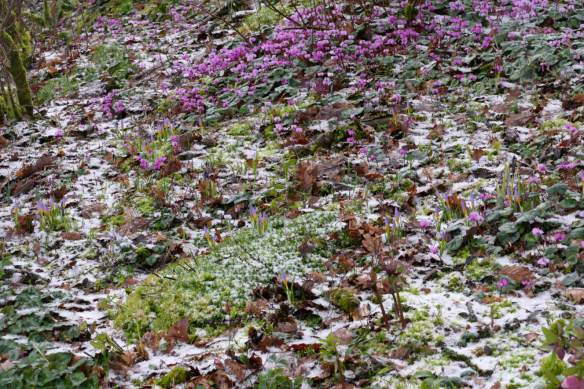 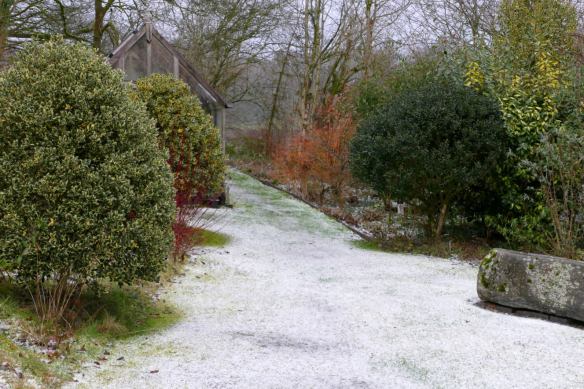 My strategy of planting many more Crocus sieberii “Firefly” beneath daffodil bulbs (to prevent rodent predation) in the magic terrace meadow seems to have at least partially worked, with flower shoots pushing up beside daffodil leaves.