1: Rose “Welsh White Dragon” (a home grown name for a home grown rose.) A seedling single white rose found at Gelli Uchaf, probably originating from R. “Kiftsgate”. It flowers about 3 weeks earlier than “Kiftsgate”, seems even more vigorous, and the foliage is much healthier in our wet climate. It has a lovely faint scent and the bees love the flowers, with their clear yellow stamens. The original plant is now doing well clambering into a young Oak tree, in quite deep shade, whilst 2 cuttings are taking off elsewhere. The new stems are very pliable, have a fabulous deep purple hue, and can easily be woven through other foliage.

2: Clematis viticella “Etoile Violette”. The first cultivar of C. viticella to flower with us, it is easy, vigorous and very floriferous. Its’ flowering time overlaps nicely with the earlier C. “Broughton Star”, and Rose Pauls’ Himalayan Musk. Provided Clematis are protected against slugs for their first 2 years, the vigorous ones seem to thrive, even in poor conditions, and are cut back to a couple of feet in late winter. 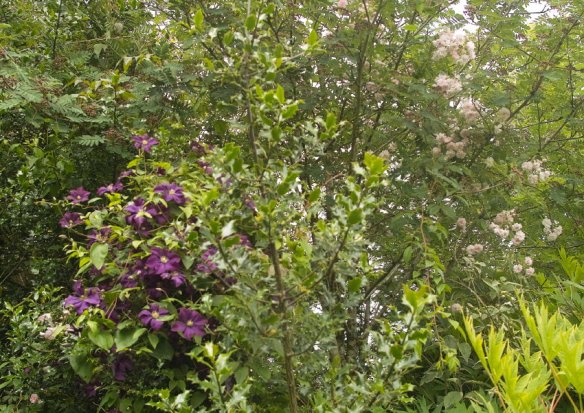 3: Geranium psilostemon. A valuable mid season flowering, large Geranium. It grows to about 1 metre, so will swamp smaller plants, but is fairly easy to remove, and doesn’t spread vegetatively, rather by seed. So it has the potential to be a thug, but it’s useful in many areas of the garden to give vibrant colour at the end of June/early July. After flowering we tend to cut it back hard, to limit seed production. It’s not particularly favoured by bees, unlike several other Geraniums. 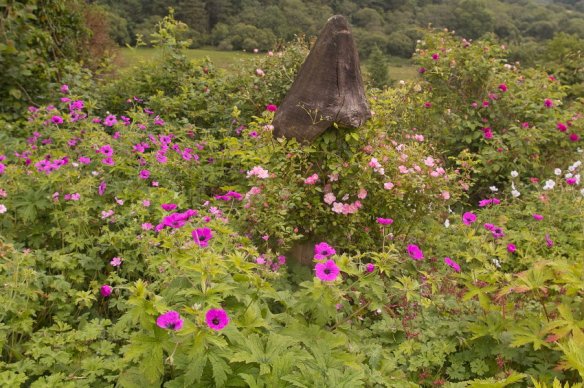 4: Rose “De Rescht”. One of our favourite roses, dating back a long time to Persia, or Iran. Tightly double deep maroon/red /purple flowers have the most fabulous scent. As is often the case with strongly scented roses, the flowers don’t last long individually, but lots are produced in sequence, from a medium sized bush. After an initial month or so of flowering, there is usually a lull in late July, before a second wave of blooms continues into late autumn. The matt mid green foliage is very healthy, even in our wet climate without spraying, and it is easy to propagate from cuttings. If we could only grow one rose, this would be it. The petals are fabulous dried for pot pouri, or culinary uses. The petals tend to fall to the ground easily, in wet weather, rather than cause bud rots which happens with many more modern roses we’ve tried.

5: Geranium orientalitibeticum. A dwarf Geranium which spreads with tuberous runners, and will seed gently, but not invasive with us. Low growing, it has marbled deeply cut leaves in different shades of green, and shallow pink flowers with white centres. It does well in pots, and within the garden, but unfortunately doesn’t have a very long flowering season. 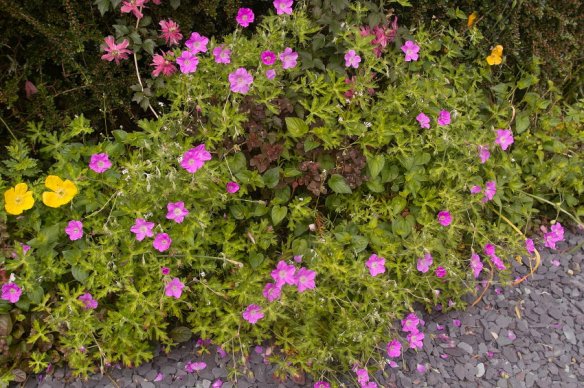 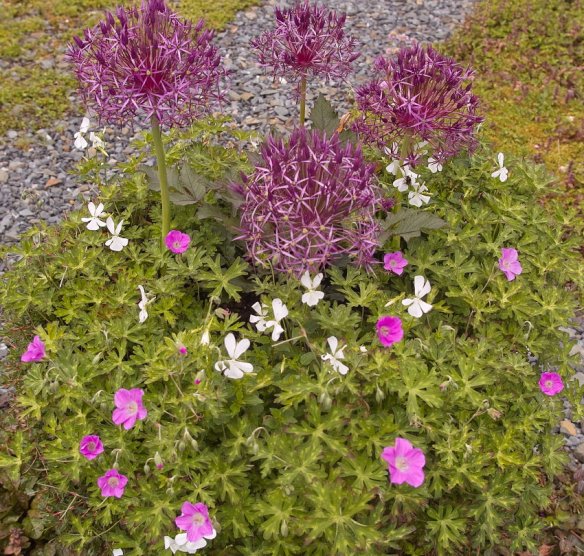 6: Rosa glauca. A strong growing rose to about 2.5 metres, with distinctive blue, purple foliage, and pretty single, unscented deep rose pink flowers, produced for 3 to 4 weeks in a single flush. We grow it from seedlings as hedges, and free standing bushes. Insects love the flowers, which are followed by clusters of lovely deep red hips later in the year. 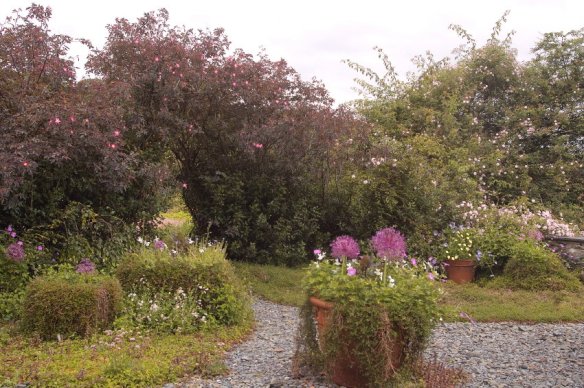 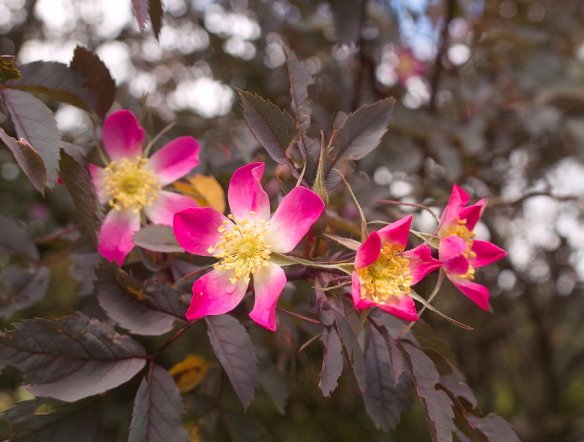 7: Rose Paul’s Himalayan Musk. A very vigorous rambling rose which for its single 3 to 4 week season of flowering can produce tens of thousands of scented double blooms on a mature plant. Our initial plant has been scrambling through an old hawthorn for about 17 years now, and fills the garden with scent when in bloom. The foliage is never immaculate, suffering to degrees from black spot, but you don’t notice this. Insects enjoy the flowers, although double, and we’be now got a couple of cuttings doing their thing elsewhere in the garden. Roses like this add a huge amount of flower for very little effort, providing you have enough space to let them rip! Even in a poor, wet season like 2016, the sequence of flower opening still ensures a spectacle. 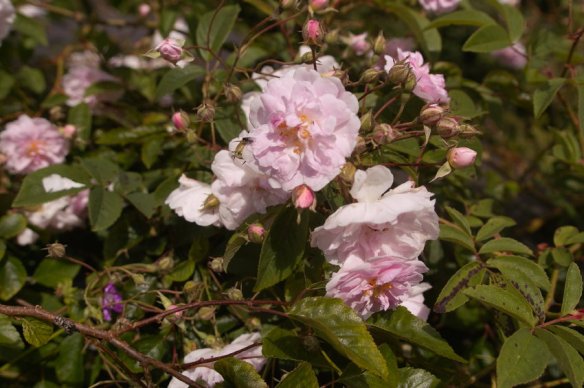 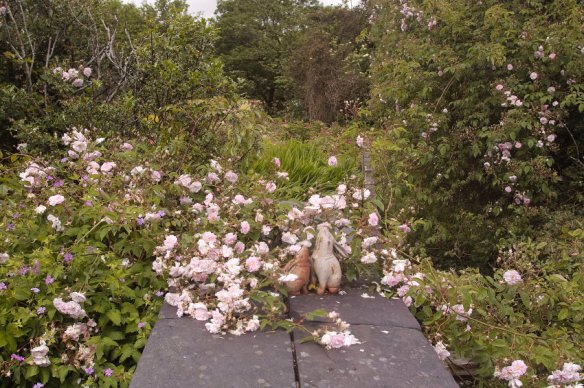 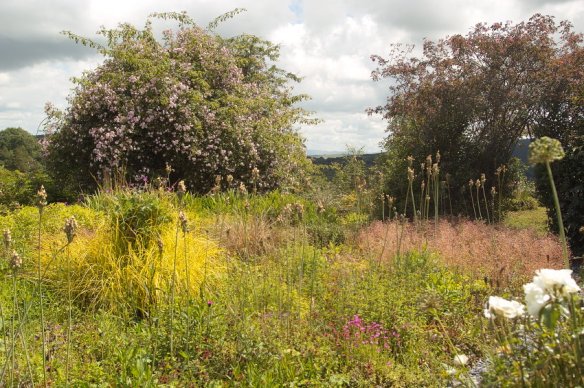 8: Campanula poscharskyana. A low growing Campanula which seeds into all those tricky dry places where nothing else would grow, and then spreads around with trailing foliage – walls, cobbles etc. Bees love the intense purple blue flowers. Valuable for its time of flowering, and spontaneity. 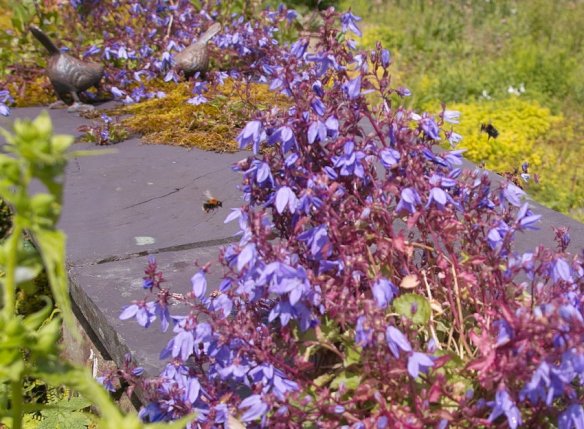 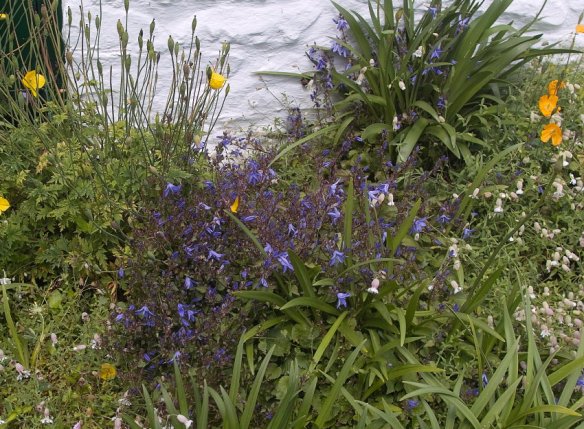 9. Geranium x magnificum. A vigorous mid height Geranium with intense deep blue/purple flowers. It has a surprisingly brief flowering period with us, but is loved by bees when in bloom. It is sterile so doesn’t set seeds, but is easy to split and move around clumps to bulk up.

10. Iris sibirica. Quite variable in flower, most of the forms we grow have come from seed. Valuable for its beautiful flowers, which sadly are quite fleeting. Individual flowers survive only a few days. It performs quite well for us in part shade and likes our generally wet ground. A good follow on plant to hide spring bulb foliage as it dies down.

11. Fuchsia magellicana “Duchy of Cornwall’s seedling”.  We grow very few Fuchsias, and this is our favourite. Worth growing for its foliage alone, with bright red new stems. We cut them nearly to the ground each year, and the flowers are then produced over a longish season beginning in late June. Bumble bees enjoy visiting the flowers, and a lot of seedlings are produced. Another plant which copes well with both damp, and part shade. 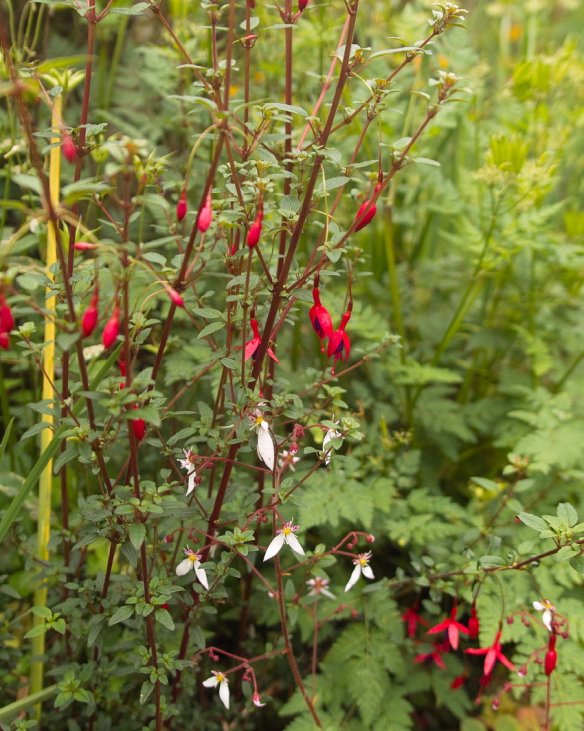 12. Ligusticum scoticum. Scotch Lovage is a native umbellifer of Scottish coastal cliffs, so I’m not sure why it does well in quite deep shade beneath our mature Larch trees, but it does! It flowers in late June, and has lovely rich green leaves, which turn butter yellow in autumn, and white flowers. Unlike many umbellifers, it doesn’t take over from the masses of seed produced, in part because slugs seem to enjoy the young seedlings’ leaves. So we grow seedlings on in pots for a couple of years before planting out. 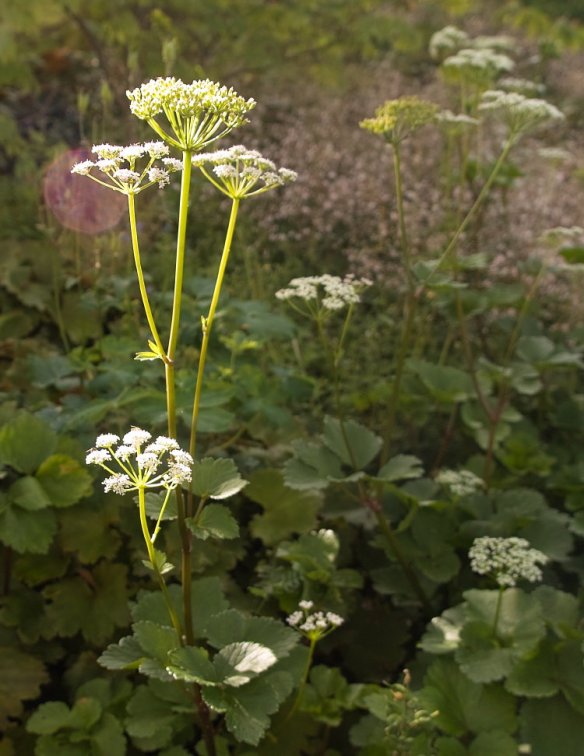 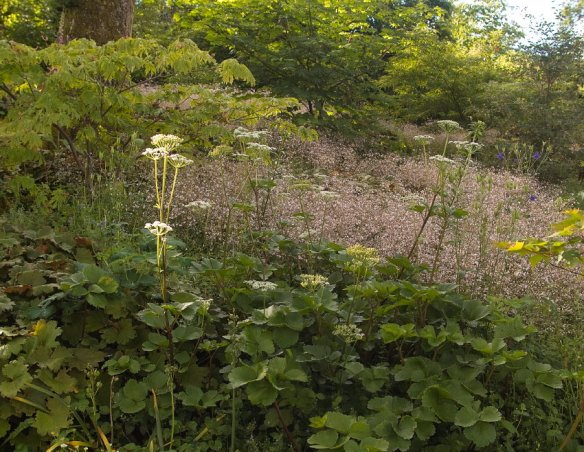