Early April continued with March’s weather theme, with colder than average days and nights, frequent frosts in the valley bottom and often very chilly winds from the North. Rainfall totals were again well below average, with more than average sunshine. This combination made for a pretty benign lambing season, 12 lambs from 9 ewes, but the weather conditions meant new grass growth for the sheep was very slow – even by mid month. 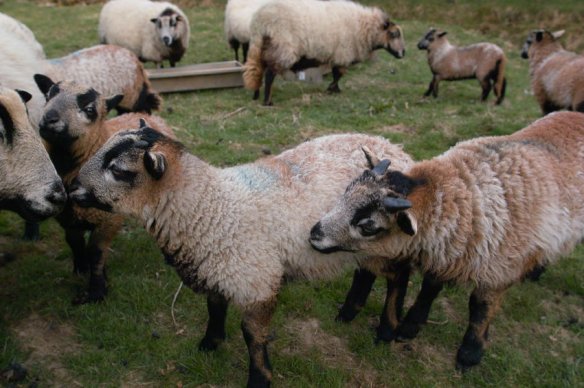 So, we needed to keep feeding hay, and some lambs appreciated our pallet based feeders, on those rare occasions when a little rain fell.

At last, on April 14th, when our grandchildren visited, temperatures rose a bit more, and the first grass cutting of the season took place on the 17th of the month. Not entirely because of the lack of garden visitors this month – simply a reflection of poor, late growth.

The swallows seemed oblivious to our weather, and arrived back, if anything a little earlier than normal, with the first appearing on April 8th.

A huge success for 2015 has been the flowering of Muscari latifolium in the multicultural magic terrace garden. They’re beautiful with their two tone blue flowers, brilliantly long lasting, as well as being nectar magnets for many bees and bee flies. 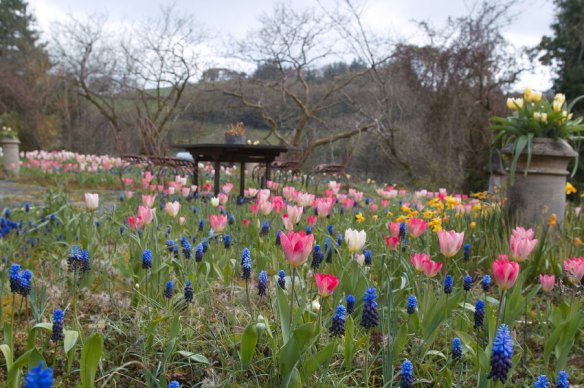 Daffodils came with a rush in the second week of April, after a very slow start to the season, and made it difficult for me to begin my self imposed task of recording the variety of older and AGM cultivars which we now grow – see my Welsh daffodils page. It’s surprising how long it takes to set up and take a few photos like that below. 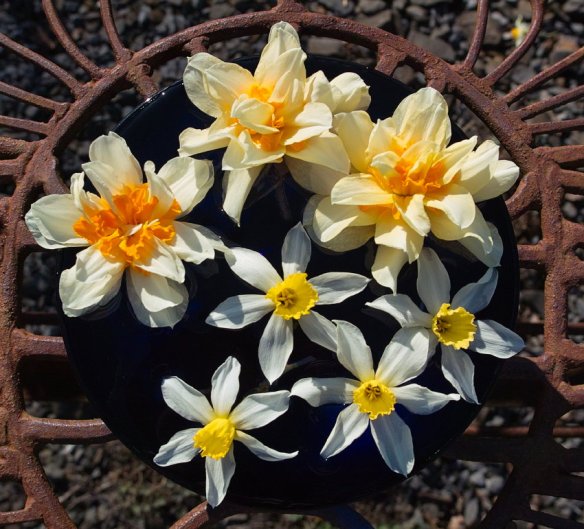 By April 21st, this weather pattern still held sway, with only 14 mm of rain so far in the month. With a spring water source, priority for any water we have is always given in the order of livestock, vegetable seedlings and lastly very recent herbaceous plantings. Everything else just has to cope. But the honeybees have enjoyed the spring, laying down honey already by early April, and with one or two bees seen collecting black pollen from our much loved Tulipa fosteriana  ‘Flaming Purissima’, for the first time ever.

This year has been the best ever for Camellia flowers, after a decade or so from first plantings. And this in spite of the very dry previous summer, which is meant to be the death knell for flower buds in this genus. Perhaps the higher light levels, or warmer summer temperatures are actually more important here?

Finally, the morning of April 27th dawned with a sharp frost (minus 8 degrees C in some parts of the UK, minus 5 degrees C here – that’s severe even for winter), and really quite late for us. Thank goodness for my big bag bottle bank which saved the day for early vegetable seed sowings. Very early forming Hydrangea flowers probably fared less well. 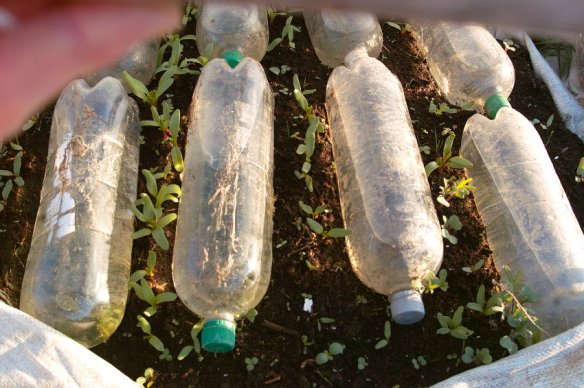 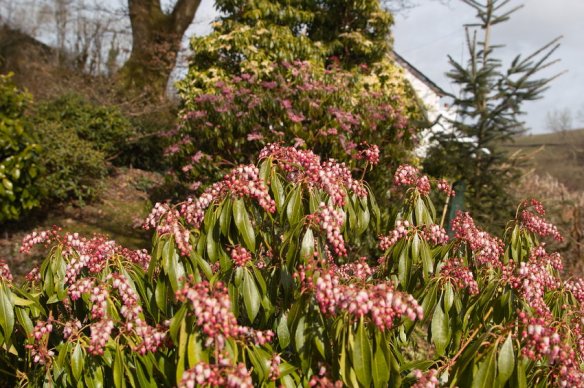 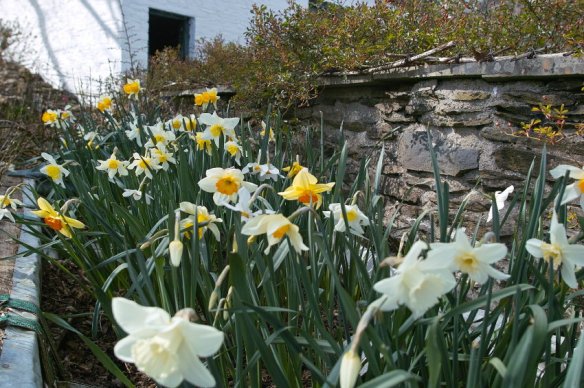 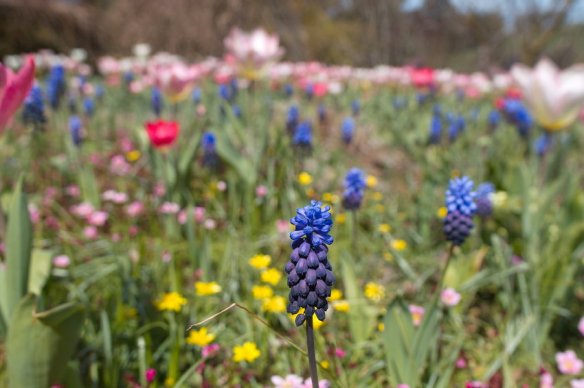 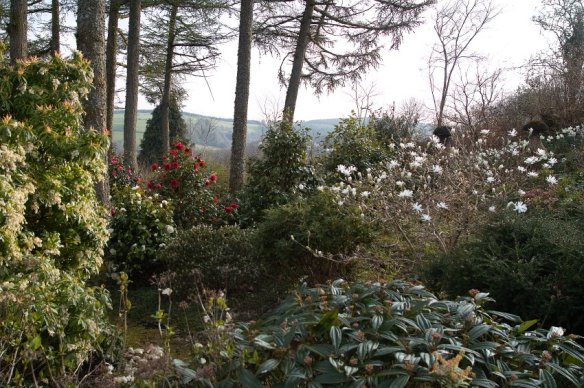 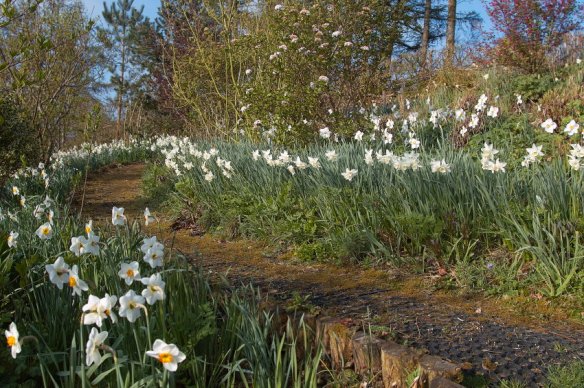 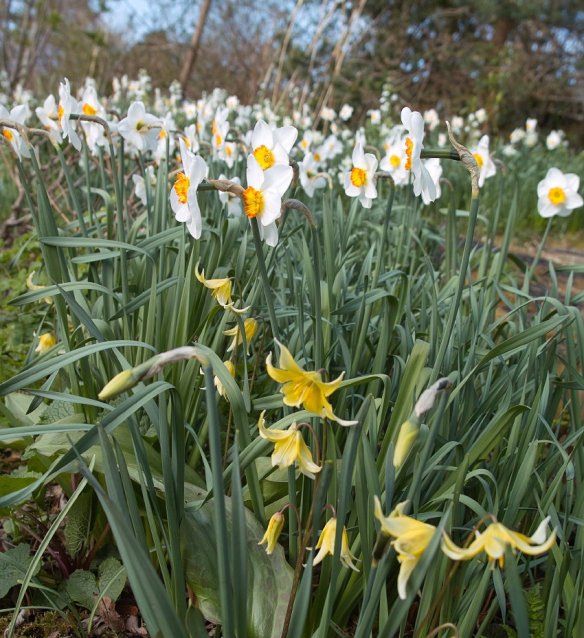 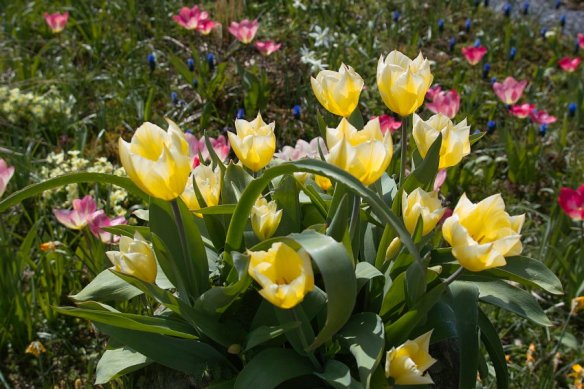 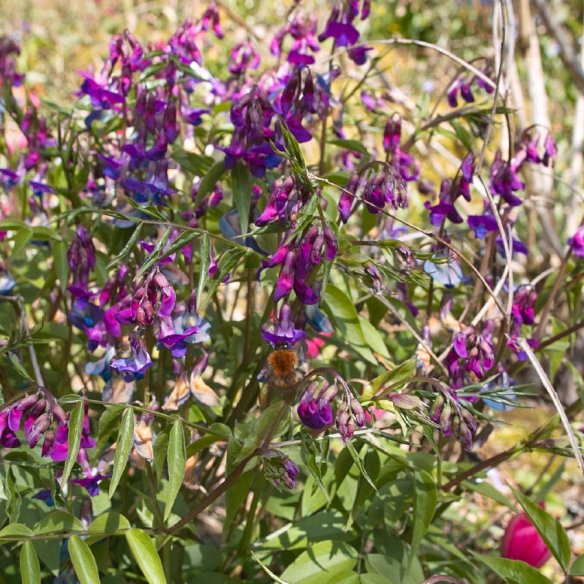 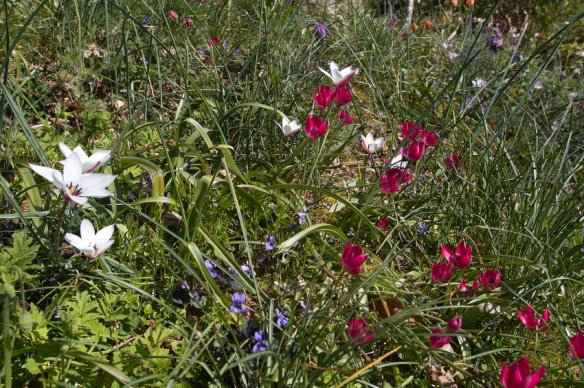 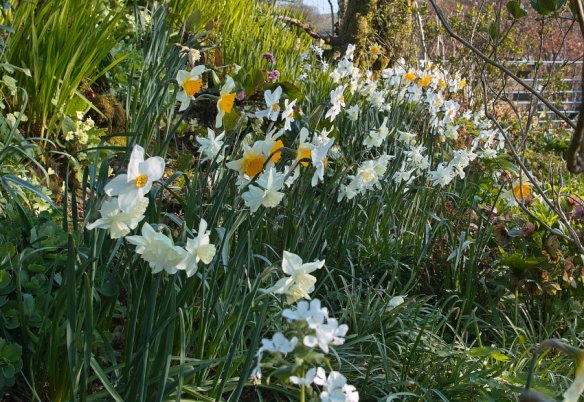 By the end of the month, the PV inverter record captured what an exceptionally sunny and dry month it was. Only 34 mm of rain. A fact captured in more detail across the UK, in this Met Office blog link. Click here.