Below are our 12 favourite plants from the garden in early December 2016. Early December is typically when I feel that we’ve turned a corner. Although most of winter’s worst weather is still ahead of us, the days are about to lengthen again, and as a confirmed snowdrop nut, or galanthophile, there’s the prospect of increasing numbers of different cultivars about to emerge over the months ahead. There are so few other flowers about, it’s one of times of the year when I shall mention specific cultivars, since variety selection is critical if you want the boost that such early flowers give you in the depths of winter. Evergreen trees or perennials, bark interest and tree or shrub form, are also invaluable for tempting you out into the garden to see how much things can change in a few days, even at this time of the year.

1.Galanthus ” Three Ships”. This has to get a mention as the reliable first flowering snowdrop, if you exclude G. regina olgae, which doesn’t seem to flower with us every year. 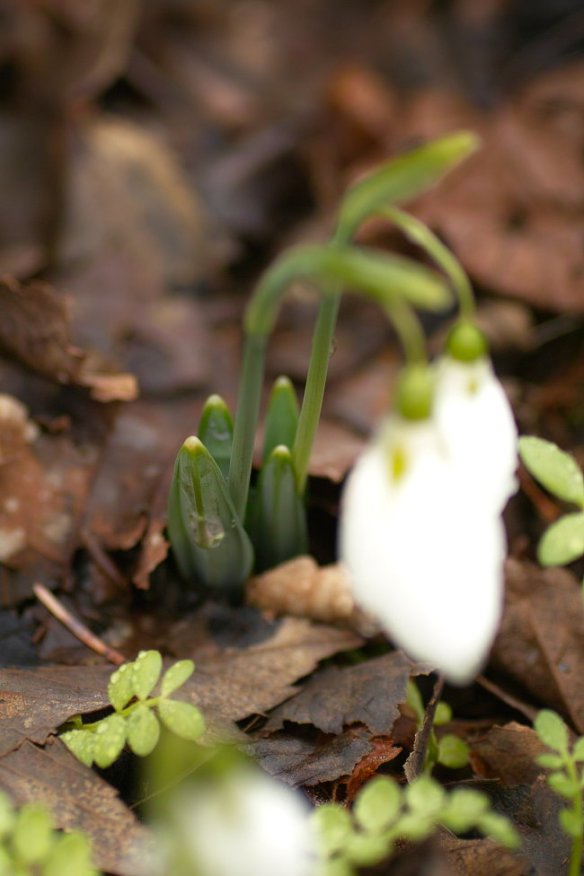 But “Three Ships” doesn’t seem to be a particularly vigorous snowdrop – it has barely multiplied in the 5 years we’ve had it, and judging by its consistently fairly high price, with most snowdrop merchants, everyone seems to find it slow. 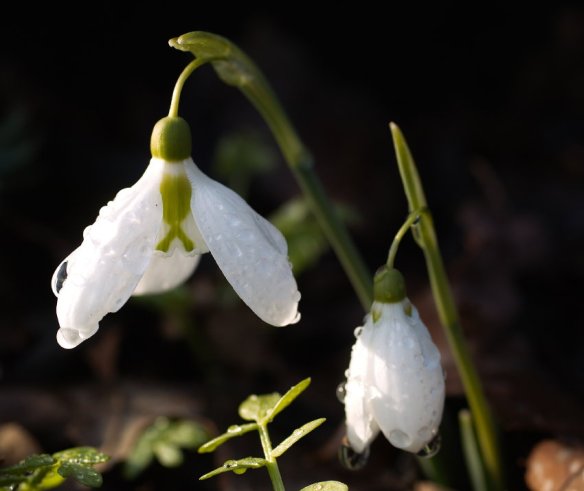 Found beneath an ancient cork oak tree on farmland in Suffolk at Henham Park, the original colony apparently got trampled into oblivion by cattle.

2. Cyclamen coum. Cyclamen coum would make it into our top 12 plants for the whole year, possibly even rivalling snowdrops! But because they can’t be clonally bulked up easily, by tuber division, most of the variants are just “plain, unnamed “Cyclamen coum. 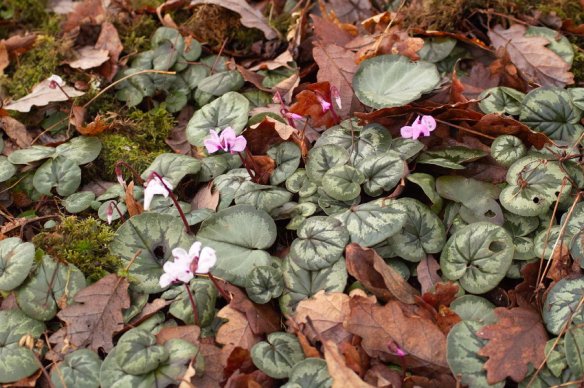 But flower colour, leaf patterning and flowering time show just as much variation as snowdrops, with flowers from deep magenta through pale pinks into white forms. They’re one of the few plants which I regularly get out and hand pollinate with a tiny artist’s brush from their first flower appearance which can be in late October, but more usually in early November, and continues with us into early April. 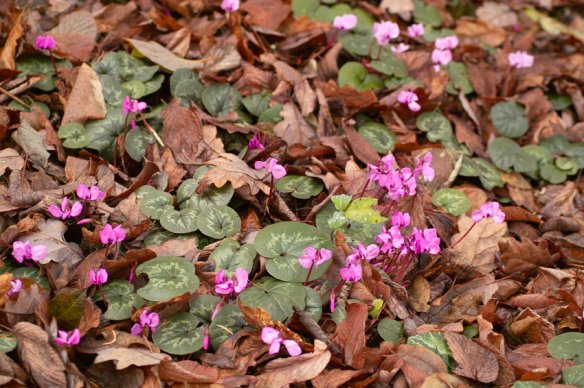 What stars! They’re really only just getting going in early December, but get more numerous every year… 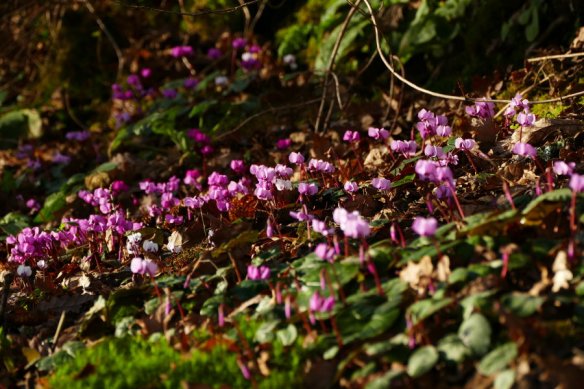 and I’ll also include a few photos below of what they look like at their peak in February, but as with the first snowdrop flowers, they give such a lift to the spirits in the dark days at the fag end of the year! 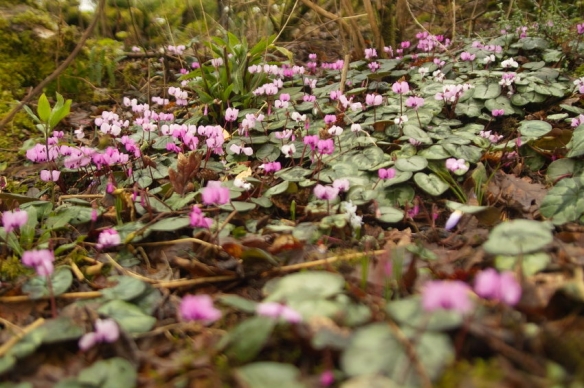 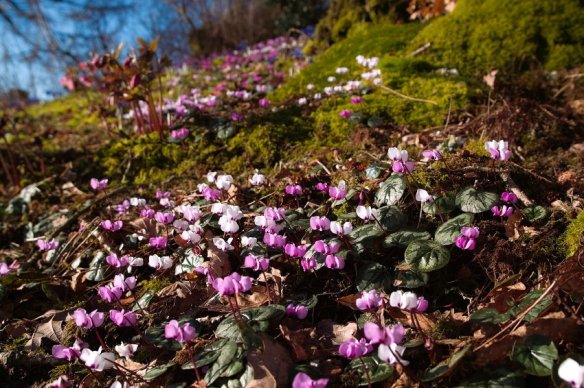 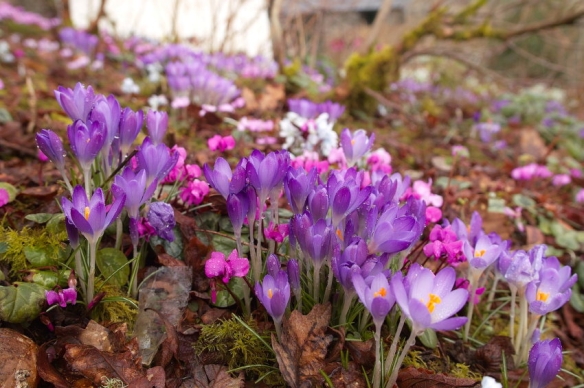 Everyone should try them – if necessary create a sloping south facing bed beneath a deciduous tree, specially for some!

3.Galanthus Mrs.Macnamara. This has to be one of our favourite named snowdrops, in part because it’s reliably one of the first to flower, in most cases within the first week of December, though it won’t reach it’s full peak of flower until the New Year. 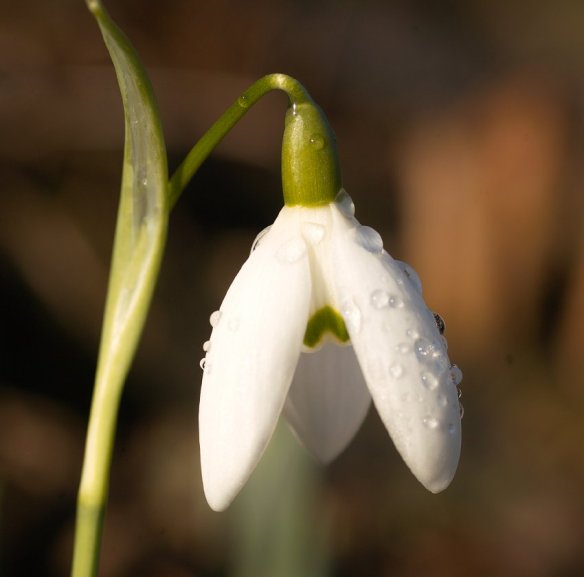 It gives me such a lift to see these elegant tall flowers, with curving spathe, above blue green foliage. Named after Dylan Thomas’ mother in law, it sadly doesn’t have a Welsh provenance, but does seem to like our Welsh conditions, and unlike the earlier mentioned “Three Ships”, multiplies at a lick. It also regularly produces a few viable seed, so I’m looking forward to seeing what becomes of these in a few years. 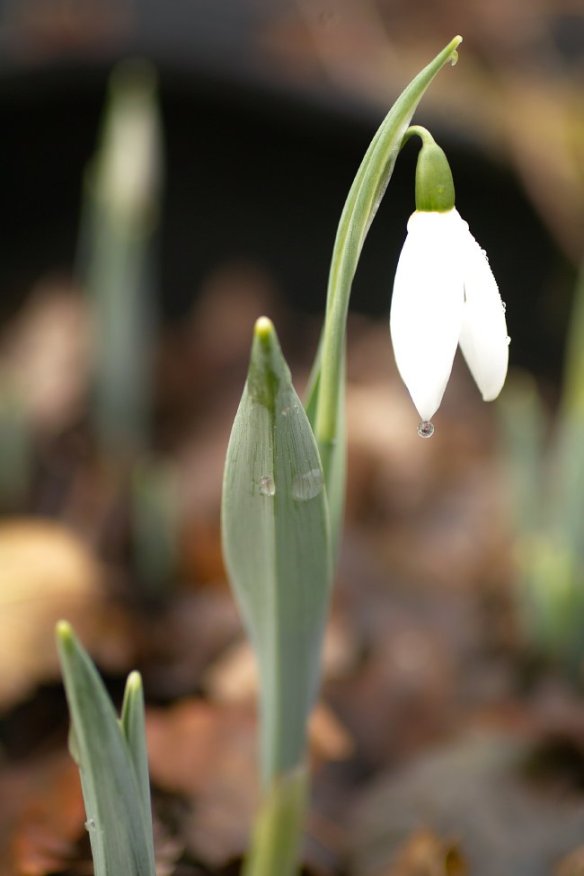 In 2016 on December we had a very rare, dry mild day on the 8th, which enabled me to do a bit of hand pollination between the 4 snowdrops with open flowers at that time. By the end of the month they’re in full flow… 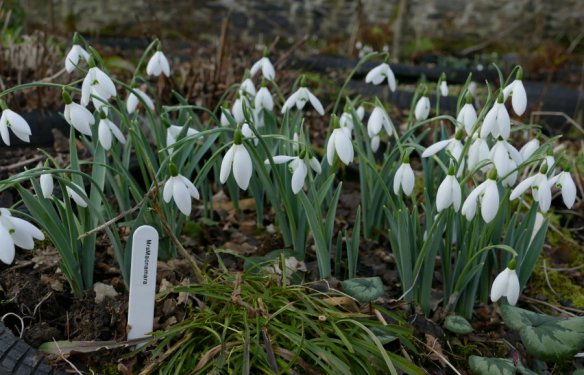 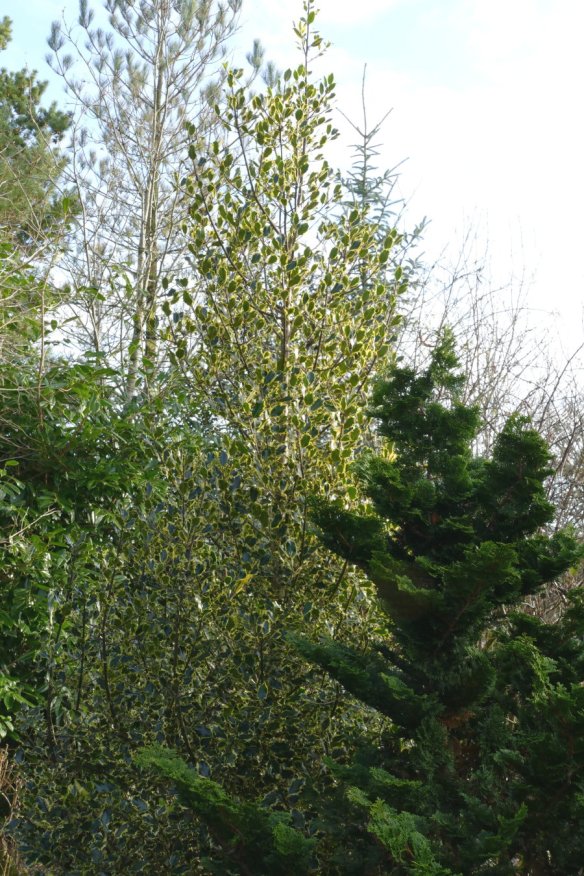 It’s one of the few which only receives light pruning since it has sufficient space for now to grow upwards. 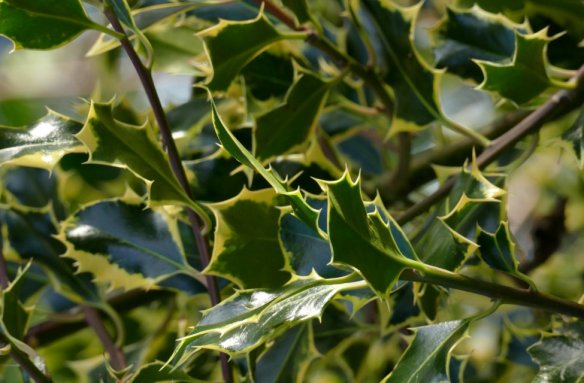 5. Luzula sylvatica aurea. This yellow leaved form of the Great Wood Rush is particularly valuable over the winter months for adding some colour. We use it near to Euphorbia amygdaloides, and Ophiopogon planiscapus Nigrescens 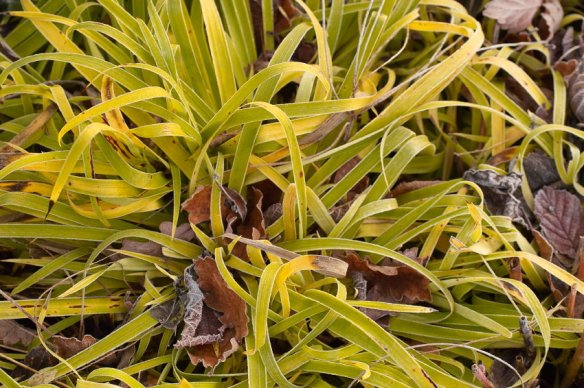 6. Eleagnus pungens maculata We really only grow variegated plants in our shrubbery, where they have to survive in very poor shale which was dug out from the bank behind the house early in its renovation. 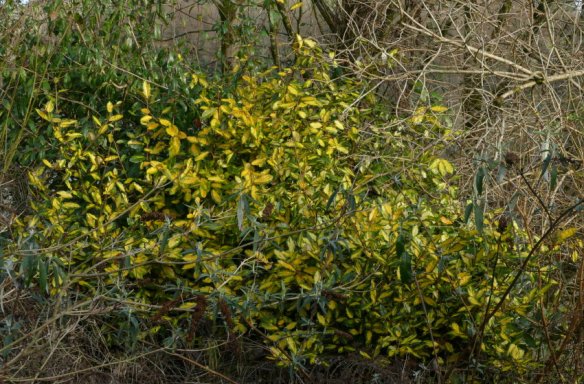 In spite of this, this seems to thrive and has a deeper golden tint to the leaves which makes it glow in the depths of winter, even under grey skies. 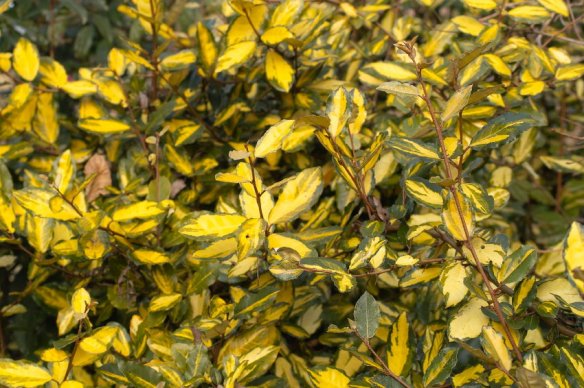 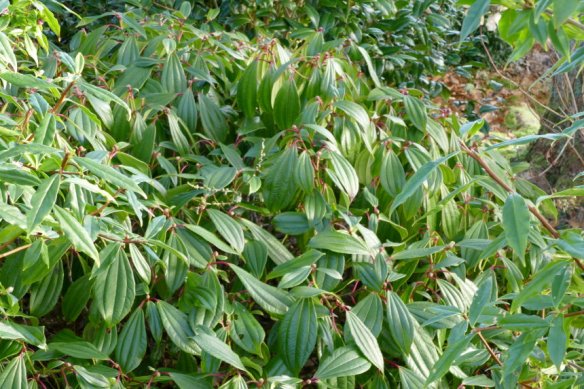 Originating in Western China it seems to thrive in our woodland conditions beneath mature Larch. 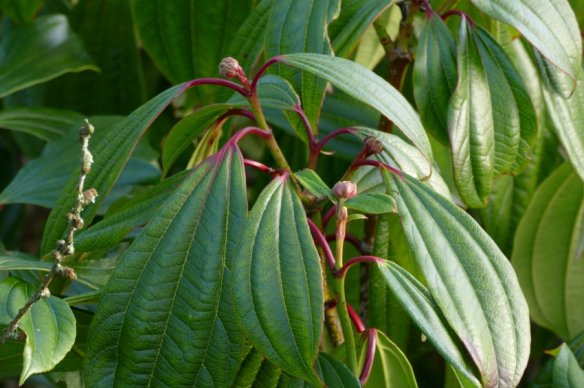 It can eventually become a large shrub or small tree, but is to some degree Bonsaied by the lack of moisture in the summer, thanks to the thirsty Larch.

8. Betula  albosinensis “Hergest”. Bought as a very small grafted tree from the fabulous Hergest Croft gardens at Kington, it is now beginning to become a feature with fabulous peeling pale pink cream bark over the winter months. 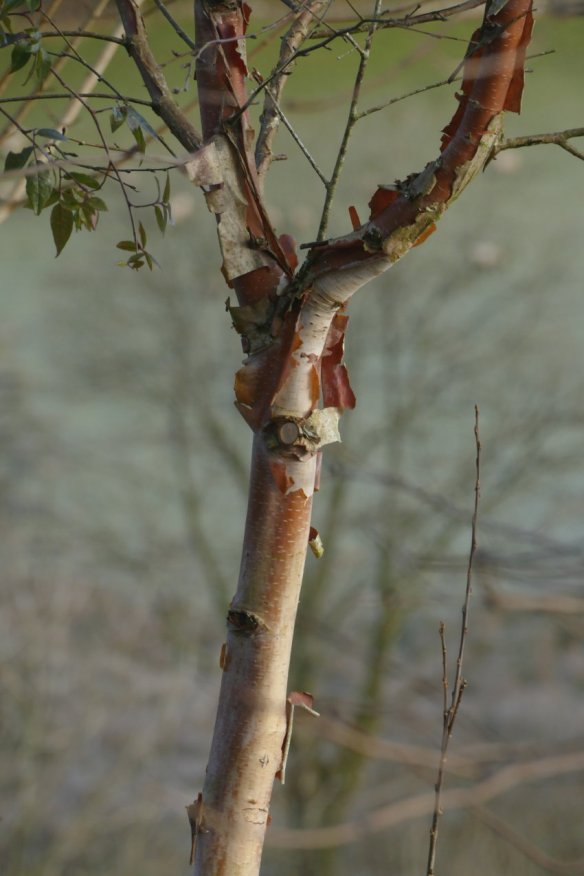 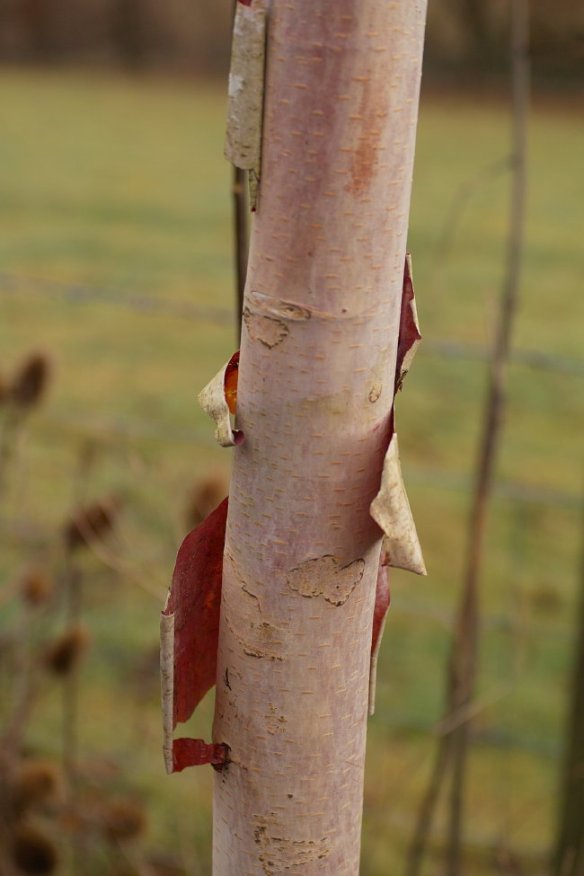 9. Skimmia japonica “Kew White”. Like all our Skimmias this lights up the under planting beneath our mature Larch over the winter months. 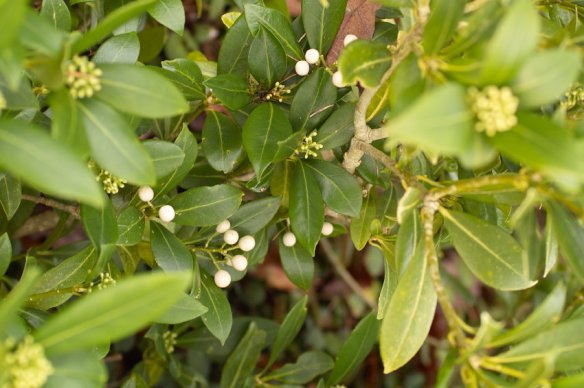 The berries are never as numerous as on S. “Red Ruth”, and don’t last as well, but nevertheless look attractive against the mid green leaves with next year’s flower buds already forming. 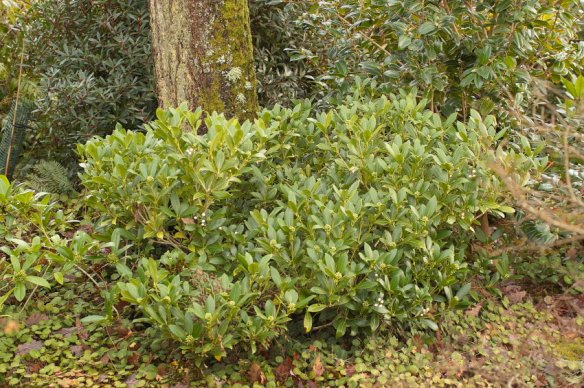 10. Ilex x meserveae “Blue Prince”. A large vigorous male form with purplish blue stems and dark bluish green leaves, with strikingly pointed leaf margins. It does produce small white flowers in spring, and can act as a pollinator for our other female hollies. 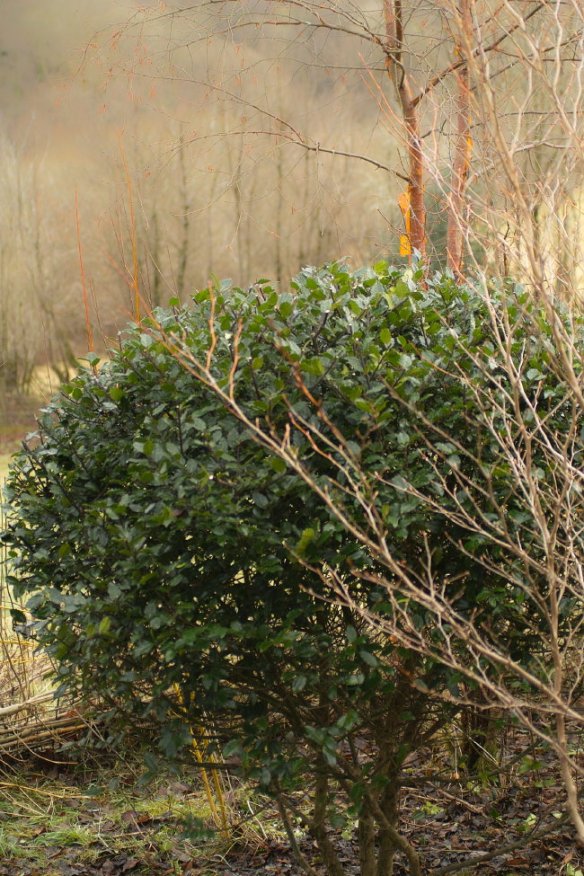 With a collection of hollies which have taken a while to establish, I opted to prune them, topiary wise, into evergreen mushroom forms, having been inspired by my efforts with chainsawed tree stump mushrooms, and also the mushroomed hollies at Tyntesfield in Somerset 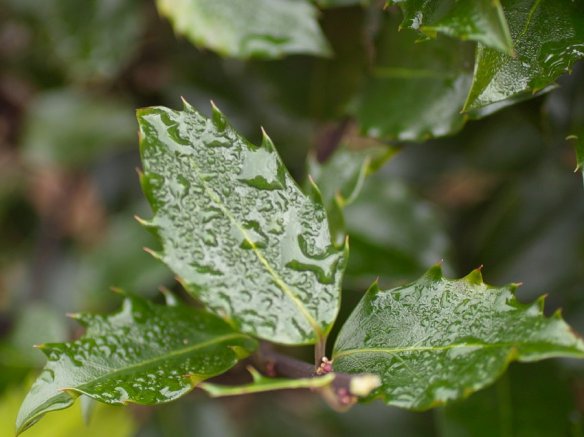 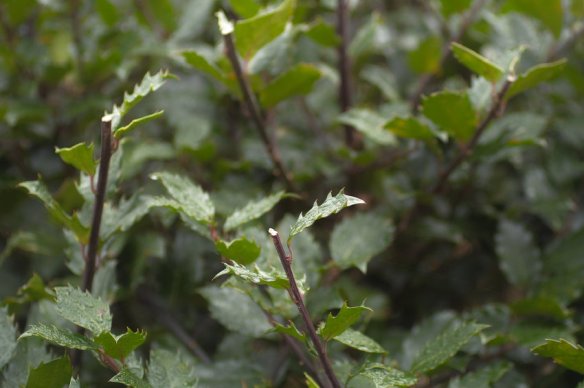 11.Ilex x altaclerensis “Ripley Gold”. This has one of the most attractive leaf variegation of the hollies we have, and with a fairly smooth leaf margin, it could almost be confused with an Eleagnus. 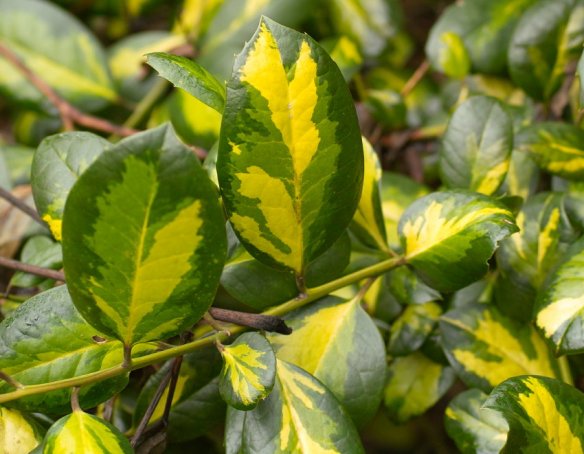 A real feature of a dark corner of the shrubbery at this time of the year. 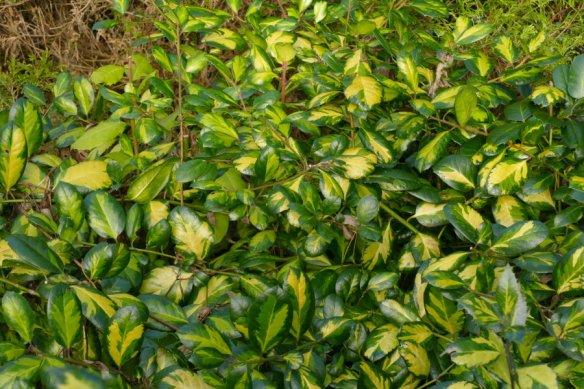 12. Carex buchananei. The Leatherleaf sedge. Originating from New Zealand this is a really useful small clump forming grass, one of several species of hair sedge. 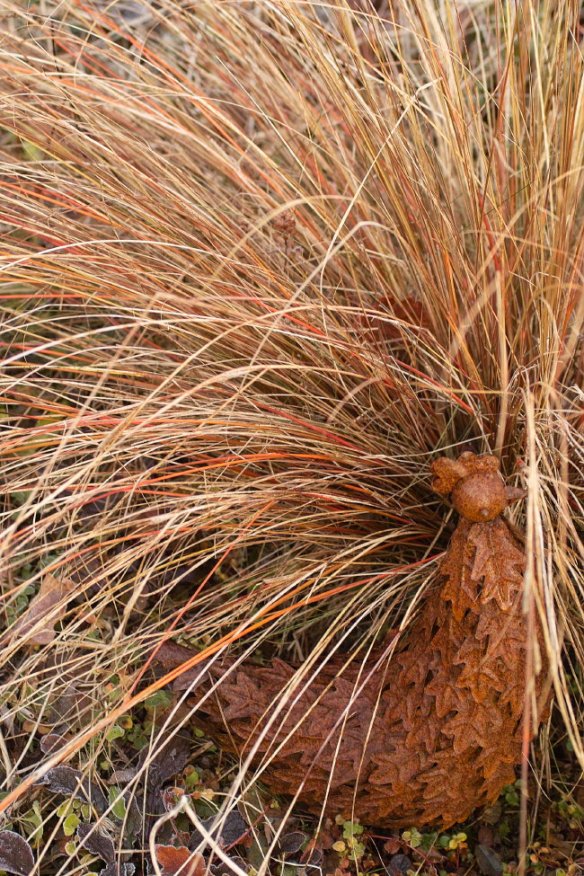 It has attractive curling leaf tips, and brown/bronze foliage which is evergreen. It seeds around, but only modestly with us, unlike some other grasses, and in winter has fabulous orange and red tints to the leaves, which add real garden interest when much else has died back or is looking soggy. 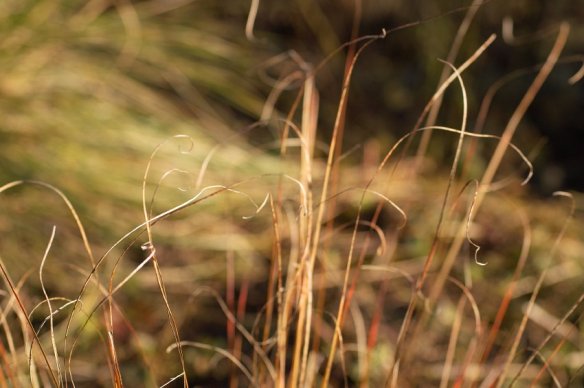 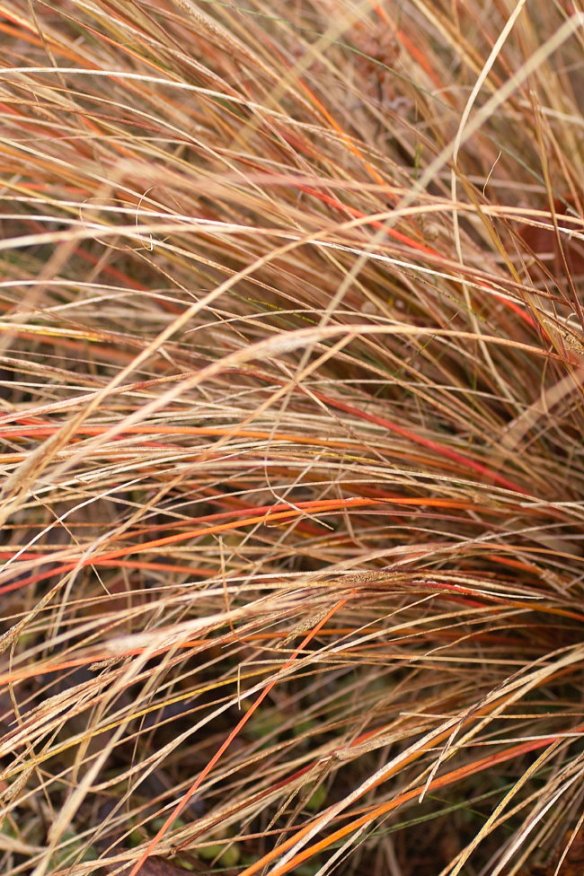