1:Echinops ritro “Globe Thistle” A tall pale blue thistle which we grow in our retyred matrix garden as an excellent late season insect friendly flower. The flower heads, made up of many tiny individual flowers are loved by lots of bees, butterflies and hover flies. A good plant to have towards the back of the border, and vigorous enough to stand without staking. All of these taller insect friendly plants are also very effective perennials to grow as shade cover and summer water uptake alternatives to trees, for some of our snowdrop collection which is dormant beneath all this foliage over much of the year. 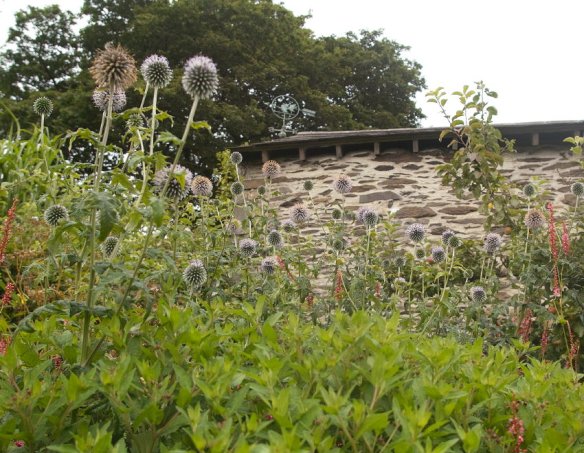 2:Cyclamen hederifolium (neapolitanum). I always anticipate the first Cyclamen flowers of the season, which usually appear beneath Hellebore foliage at the base of our big old oak, as being the first sign of autumn. Very early in our garden making we were inspired to plant some of these tubers after seeing them flowering within a couple of feet of the base of a huge Lebanese Cedar, in the old Bristol Botanic Gardens at Leigh Woods. We transported some of these by then dinner plate tubers into the garden here, and plants like the one below are the result of years of saving and scattering seed, or moving seedlings. They seem to thrive in the shadiest of places, and can indeed cope with very dry conditions, since the leaves only appear after the flowers have been produced, in the damp autumnal conditions. In white and pink, the flowers are delightful and there is then the bonus of heart shaped mottled green leaves providing ground cover interest throughout the winter months. 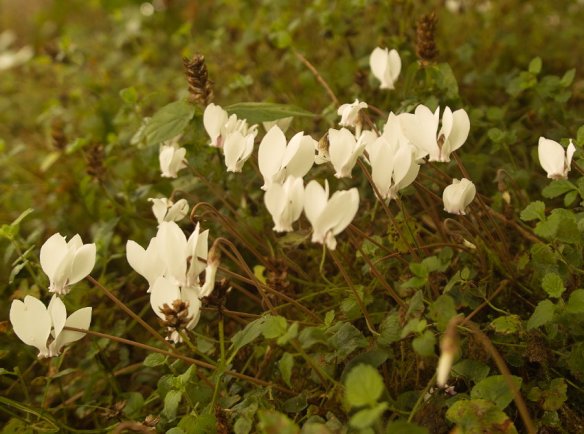 3:Hydrangea involucrata “Plena” Probably not one of our top 5 Hydrangeas, but valuable nevertheless, because of its’ length of flowering time. The young leaves are slightly appealing to slugs, but once over this problem, it forms an attractive smallish to medium sized bush. The flowers appear much earlier – late July, but continue opening well into September, with the outer sepals having a somewhat double white appearance, hence the name, complementing the inner pale mauve flowers. 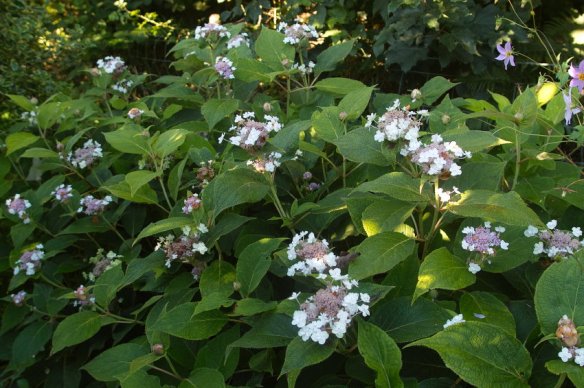 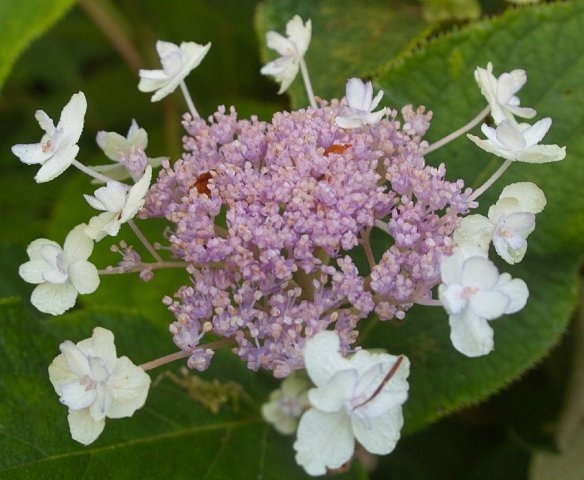 4:Rudbeckia ?? Unfortunately we’ve lost the record of which Rudbeckia this is, but it towers over 7 feet high in one of our retyred circles in our matrix garden.

Covered in attractive “black eyed susan” cone flowers from early August onwards, the flowers appeal to many flies and bees.

Vigorous and with a long flowering season, my regret is that I shall have to move it to the back row of planting – it’s currently in row 3 and is shading out some smaller specimens behind it. In spite of its’ height, it copes reasonably well with winds without staking – which we rarely have time to do in our garden. 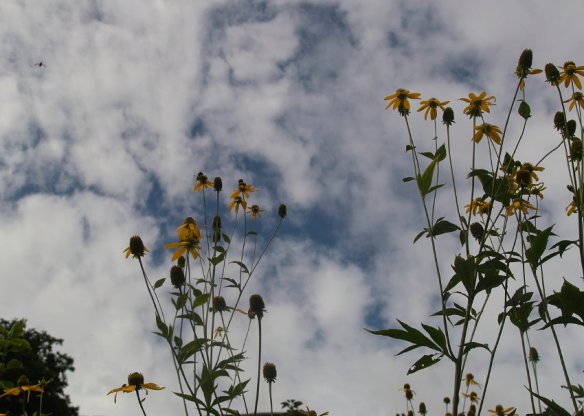 5:Sedum spectabile “Autumn Joy”(Herbstfreude) One of our stalwart plants that has followed us from garden to garden, having been originally gleaned as divisions from Fiona’s family’s garden. It is one of those rare plants which as the tiny flowers begin to open, attracts huge numbers of insects from across the genera – moths, butterflies, bees and flies. I always expect the flowers to open in mid August, but either my memory is failing, or in the last 2 summers, the flowers don’t really colour up and suck in the insects until the first few days of September. As tough as old boots and by far the most insect friendly of any Sedums we’ve tried. Easy to split and propagate, and after attracting all those insects, the flowers age to a deeper claret cover.

6:Hydrangea paniculata “Grandiflora” This was one of the first forms of H. paniculata which we acquired, and I think it’s still one of the best we grow. Probably the earliest to flower with us, beginning in mid August, and very reliable in flower production. By September, it’s in peak flowering mode, with typical creamy white huge panicles, which take on subtle pinkish tinges as the flowers age. Like all paniculatas it’s easy to manage, by cutting hard back after flowering – I now tend to cut back to the first pair of strong buds on each flowering stem – within a few years a really attractive shrub is produced. 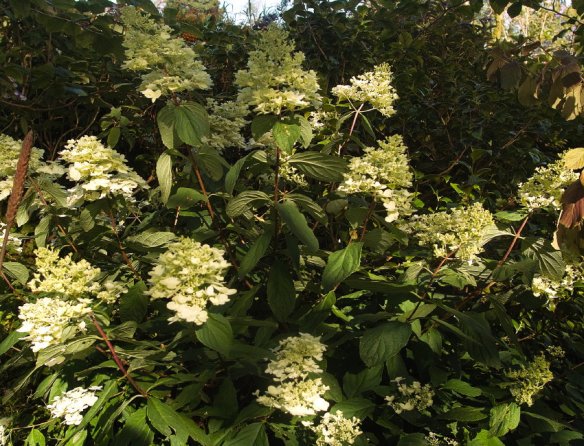 7:Selenium wallichiana A late flowering umbellifer from the Himalayas which has become quite a trendy plant recently. I’m not sure it’s really that much nicer than our native wild Angelica, which has purple stems and grows in our meadows, or the still earlier flowering meadow native Valeriana officinalis, but these 3 do seem to flower sequentially, so I’m planning to try to grow them in the same spot between our tree stump mushrooms, to produce an extended umbellifered display. But certainly lovely flower heads in early September, and very pretty finely cut ferny  foliage.

8:Clematis viticella “Blue Belle” A vigorous larger flowered viticella, which is easy to propagate from cuttings, and reliably flowers well towards the middle of August, with rich mid blue/purple flowers. 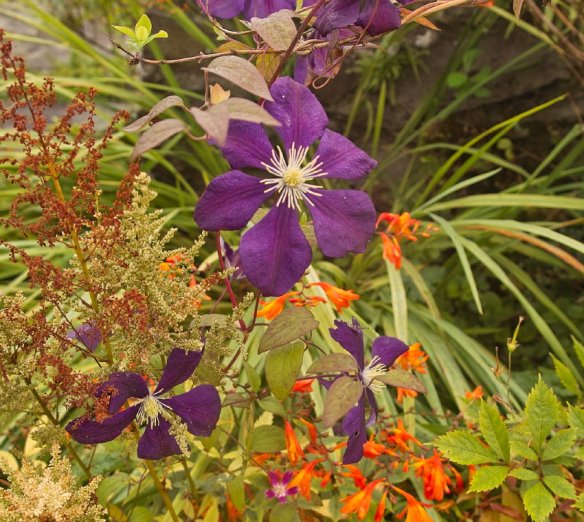 9:Leycesteriana formosa – Himalayan Honeysuckle This plant undoubtedly has an impact in the garden for quite a long season with its drooping clusters of white/pink flowers, set off by the attractive leaves. The insects love the flowers, and the birds like the red fruit which follow. Once leaf fall has occurred, the bright green hollow stems of the current season’s growth also have great winter appeal. BUT all those fruit mean that seedlings pop up all over the garden, and whilst easy to pull up at a young stage, a quickly growing young plant soon develops a good root system which requires much more effort to hoik it out. So zero tolerance is needed, as with native ferns, or the garden would quickly become over run. 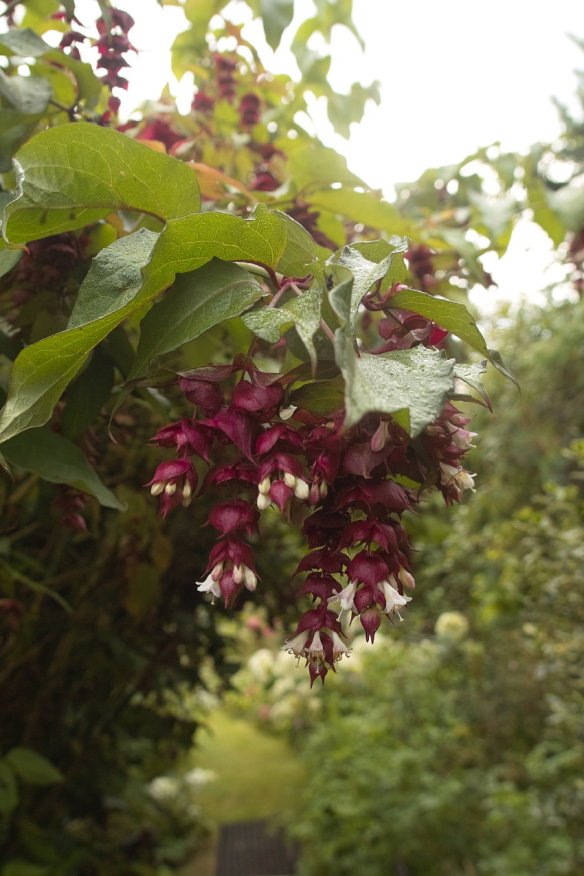 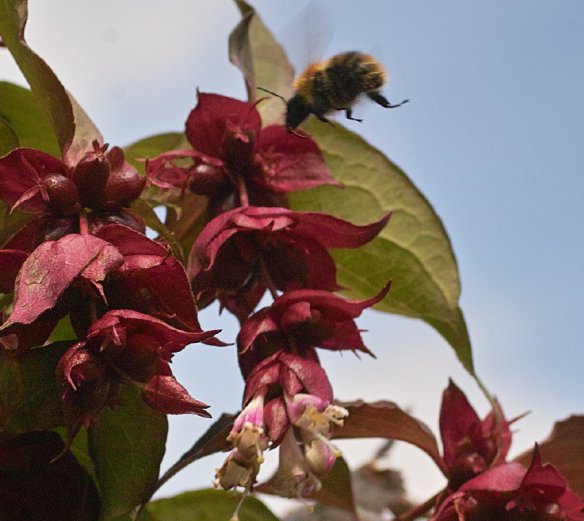 10:Clematis “Perle d’Azure” A reliable large and late flowering Clematis, up to about 9 feet, where we grow it. Not much else to say about it – it begins flowering much earlier, but is usually at its’ peak towards the end of August, and these colours fit in well with what else is in flower at this time. 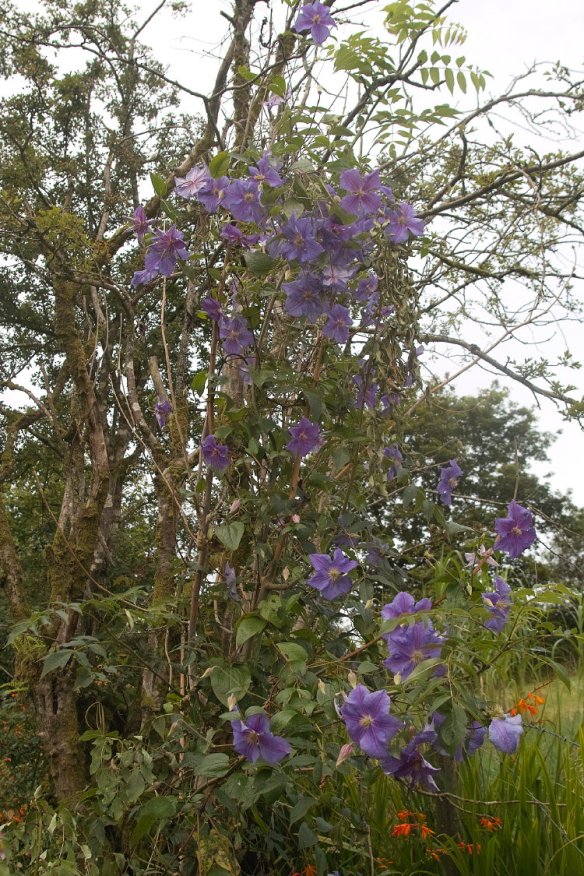 11:Eupatorium maculatum atropurpureum Another statuesque plant that can easily grow 2 metres tall, and has the advantage of not requiring much staking in a fairly sheltered spot. Purple coloured stems, and attractive leaves support flower heads with masses of tousled pink purple flowers in mid August, which continue into early September, when our butterfly season reaches its’ peak. At the back of our long retyred border, where they have the advantage of a uphill slope, the plants tower above you, so that watching the butterflies nectaring is better done, from the terrace garden above. 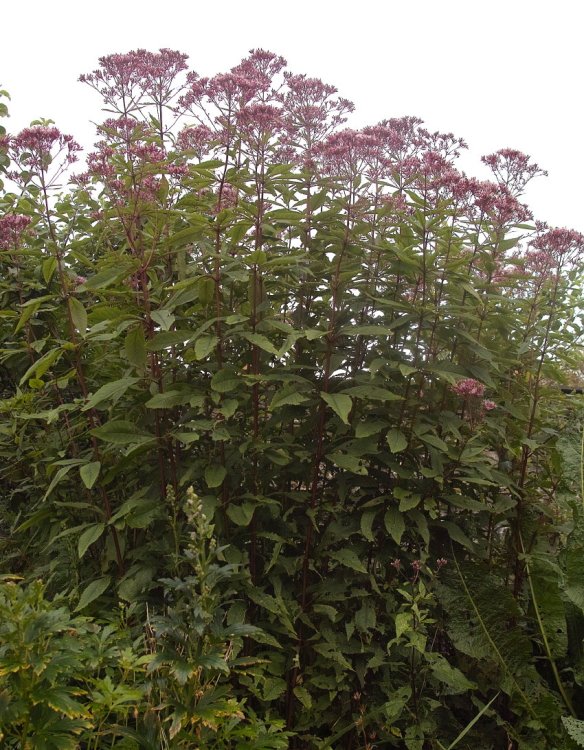 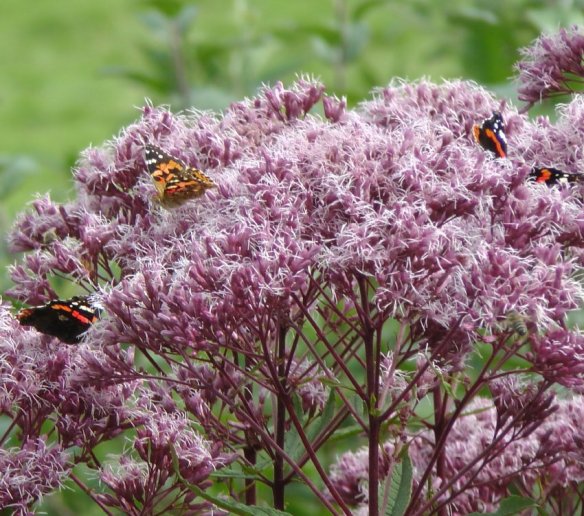 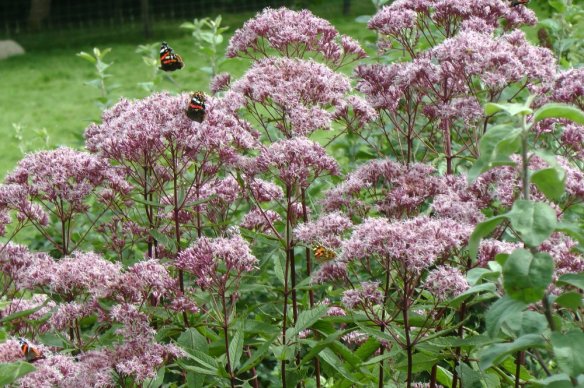 12:Hydrangea paniculata “Phantom” A more recent paniculata cultivar, which rivals grandiflora in terms of panicle size and vigour, but which begins to flower a little later with us. Wonderful in part shade in sunshine of under grey skies. This one is growing beneath a Sorbus sargentiana. 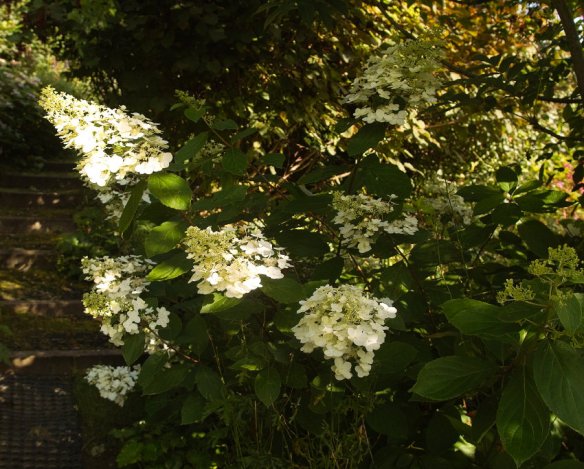