1: Self Heal. Prunella vulgaris. A native that thrives in damp conditions in shorter vegetation and valuable because of its’ flowering time for many bees and flies. The individual flowers don’t last too long, after pollination, but the short flowering seed head stems continue to look attractive for some time afterwards. It also thrives and flowers in some of our mossy lawns, providing bee food along with white clover, from the shortest of clipped flowering stems, if lawn cutting is delayed for a while. 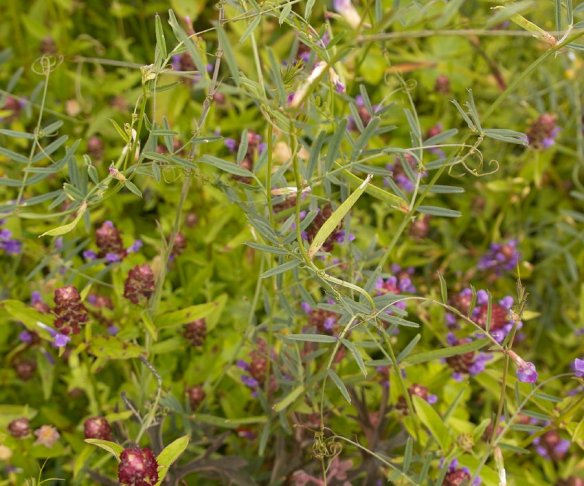 2: New Zealand Burr. Acaena microphylla(?) We’ve lost the details of which Acaena we have, but it plays a valuable role in our terrace garden, as having roughly equal vigour to mossy Saxifrage and purple bugle, in giving a complete ground cover low mat. It spreads by running stems, but is easy to rip up from unwanted areas. We started off with 2 forms of Acaena. The one with blue green leaves died out very quickly, but this one has bronze green leaves, with small white flower heads in June which mature to vibrant red burrs in early June. Like all burrs, they can stick to gloves and clothing, but it creates a wonderful feature with the flowers of Self heal.

3: Bitter Vetchling. Lathyrus linifolius. Another native flower found in hedgerows and meadows which I’ve introduced to the terrace garden, and meadows. Flowering from early June, it is never spectacular, since very the pretty small magenta/purple flowers are produced singly, along extending stems. But at this time, the foliage takes on a more glaucescent, blue-green tinge, and the seed pods begin to change from green to brown and then a striking black colour before splitting open. It will grow through other plants adding an extra layer of interest, whilst the roots fix nitrogen, and bumblebees enjoy visiting the flowers. 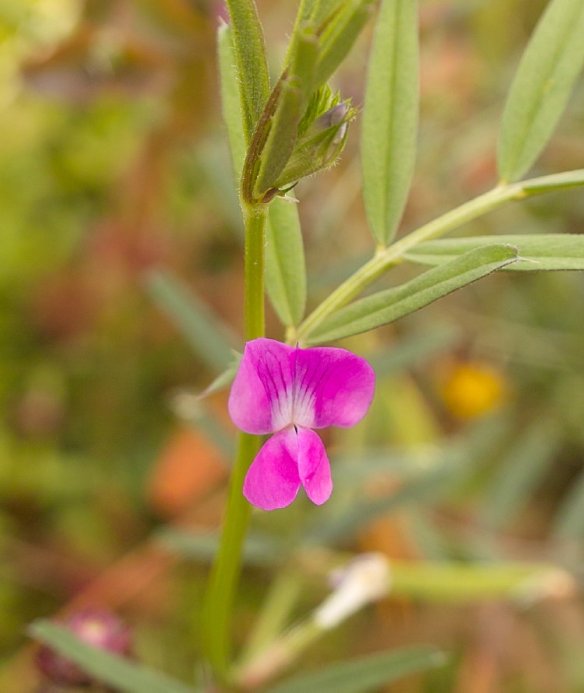 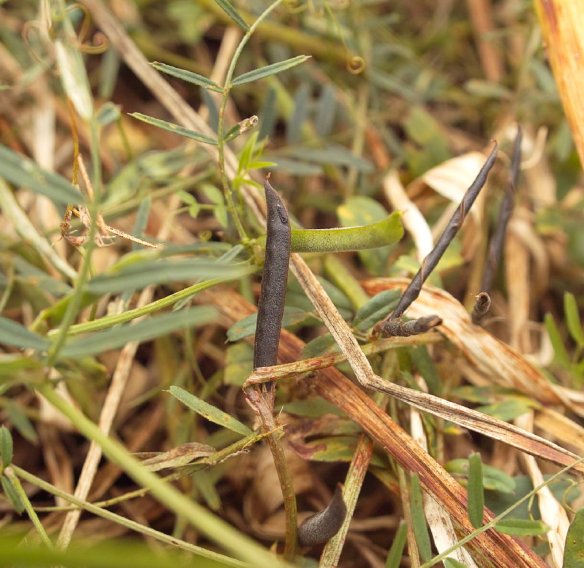 4:  Rose “Bonica”. Anyone who only grows scented roses would give this a miss, but it’s one of the most reliable flowering shrub roses here. A bit later than “Rose de Rescht”, it produces masses of clear pink flowers, which look good whatever the weather. It also continues to flower for a long season – sometimes until the first frosts. The colour fits in with many other plants which flower with us in July. 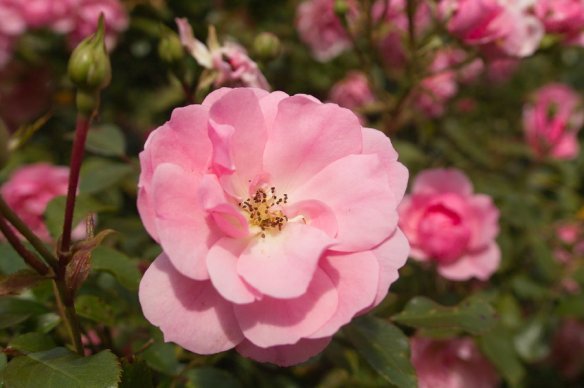 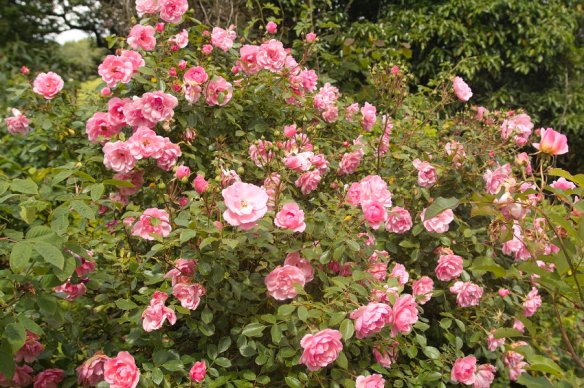 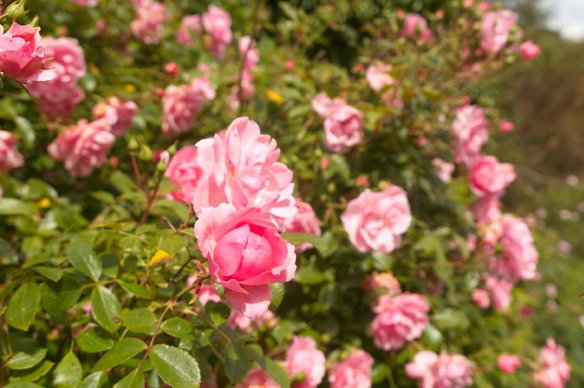 5: Lamium maculata “Beacon Silver”. One of our favourite Lamiums. Fiona planted it along the shaded North side of our apple tree tyre pillars, as ground cover, with insect friendly flowers. It excels here, with the leaves picking up the colours of lichens which are gradually colonising the tyre surfaces. The deep magenta flowers are loved by bumble bees, and the leaves look pretty through much of the year. Even better, unlike say L. “White Nancy”, the itinerant rabbits don’t seem to enjoy its’ flavour, so tend to leave it alone, whereas “White Nancy” gets raised to the ground in spring! 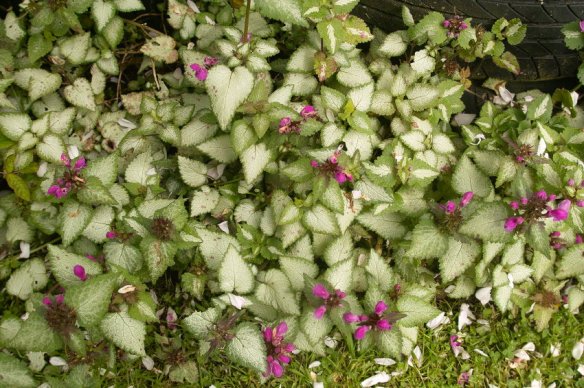 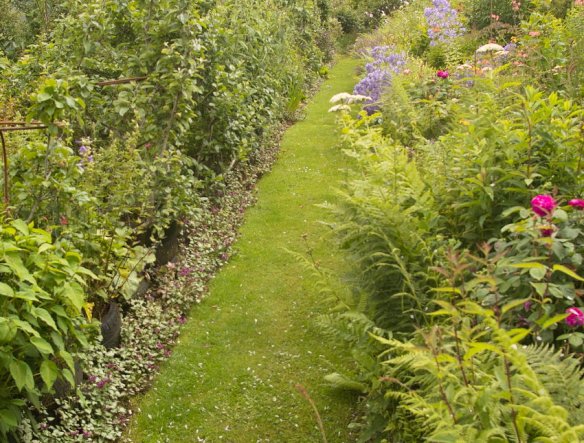 6: Campanula lactiflora “Loddon Anna”, and seedlings. At another time of the year, this wouldn’t feature in our favourite plants, since it is a little messy, and really needs supporting or staking, which we don’t do in most of the garden. But in early July, it does introduce a splash of colour to a couple of areas of the garden, with masses of flowers on stems 4 to 5 feet tall. These easily flop over in rain, but if cut back, secondary flowers will form to extend the season of interest. 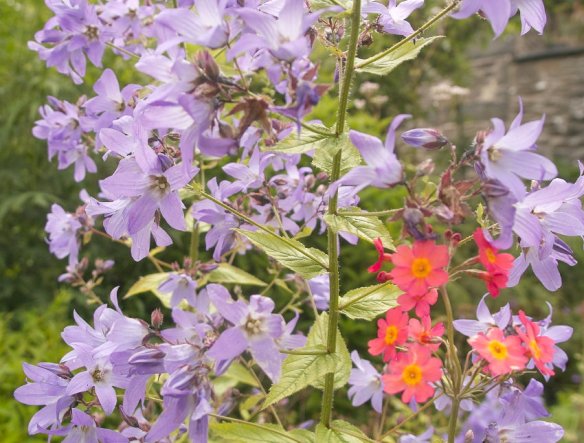 7: Purple Toadflax – Linaria purpurea.  Whilst searching for a flower to add colour and interest in early July, I realised that this native plant, which grows occasionally in local hedgerows might fit the bill. The favoured locations are apparently walls and dry, bare places – with us it germinates in quite shady spots as well, and the tall foliage and flower stems will clamber through other plants and give purple spires of tiny flowers which the bumbles and honeybees love. Easy to spread by scattering the numerous tiny seeds around, but it never seems to dominate with us, so is always welcome wherever it pops up, and individual plants never survive for many years. Its’ pale pink named form, “Canon Went” is an equally good variation of this theme. 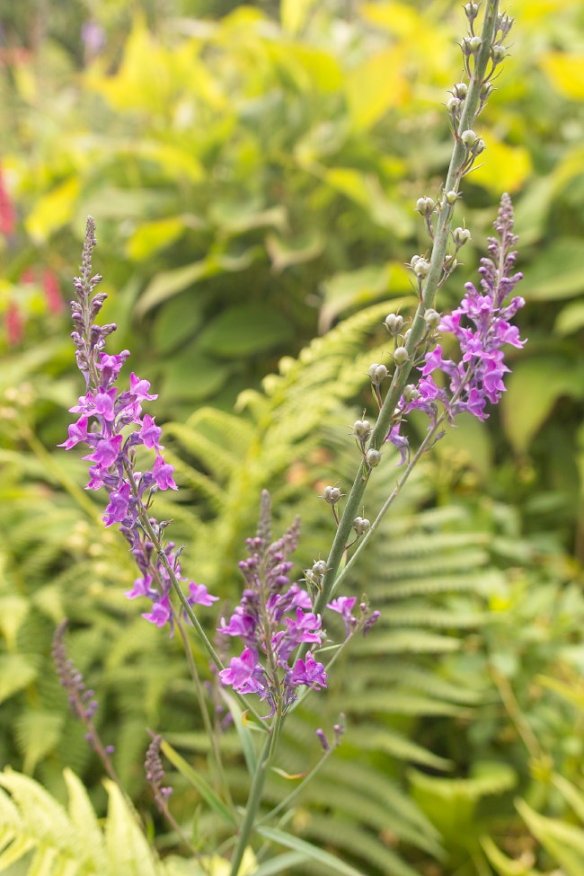 8: Foxglove. Digitalis purpurea. Nearing the end of its flowering time in mid July, this is another great cottage garden style plant. BUT! Welcome though the flowers are, it can easily threaten to dominate, with thousands of seedlings, which have such large rosettes of leaves by their second year, that much else is swamped out. At least being biennial, you have a lot of time to remove excess numbers, but of course this all takes time and effort… Nevertheless, the garden without some foxgloves would be much poorer, particularly at this time of the year, and the bumble bees would miss it too. However, we try to remove most of the flower stems before all those seed capsules split… 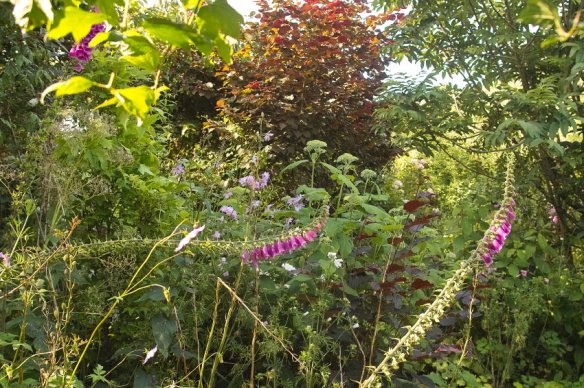 9. Dahlia merckii. A real gem. This species Dahlia from Mexico, with supposedly borderline hardiness, germinates easily from seed – even in the ground, and it seems to overwinter here without specific protection. Light, divided bright green foliage produces very pretty single pale lilac flowers, up until the frosts, if deadheaded occasionally. The flowers are loved by many insects, and because the plants are quite tall, can be placed between spring bulbs and other shrubs, and will flower quite well in even in deep part shade.

10. Rose “Francis E. Lester”. Another favourite climbing rose, with moderate vigour – not quite in the “Kiftsagte” league. The flowers begin to open in late June, and are a soft pink fading to pale white centres, offset by all those yellow anthers. They seem to glow en masse, even under grey skies, and being single are visited by honey bees and bumbles, and have a pleasant, mild scent. Wonderful to send up into a strong tree, and reasonably disease free. 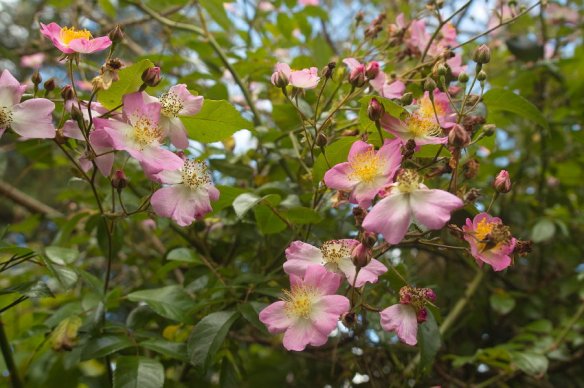 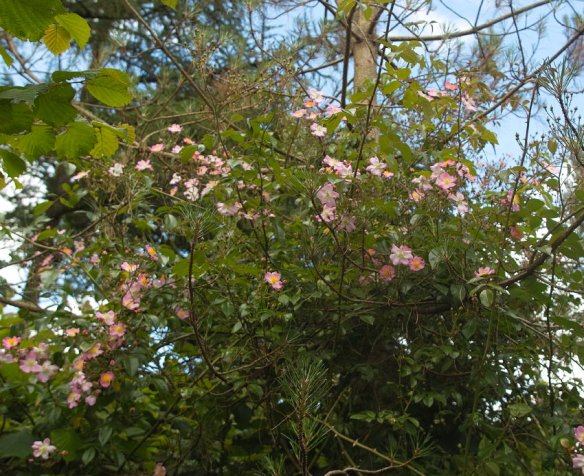 11. Penstemon “Husker’s red”. Worth growing for the foliage alone, this is a purple tinged leaf Penstemon, which seems to come true from seed, and is reasonably long lived. In late June into July the attractive blue tinged white tubular flowers are produced in large quantities, and are favoured by many bees. It flowers fairly well in part shade in amongst other vigorous plants like Sweet Cicely and Geanium x magnificum, and performs even better given more space. 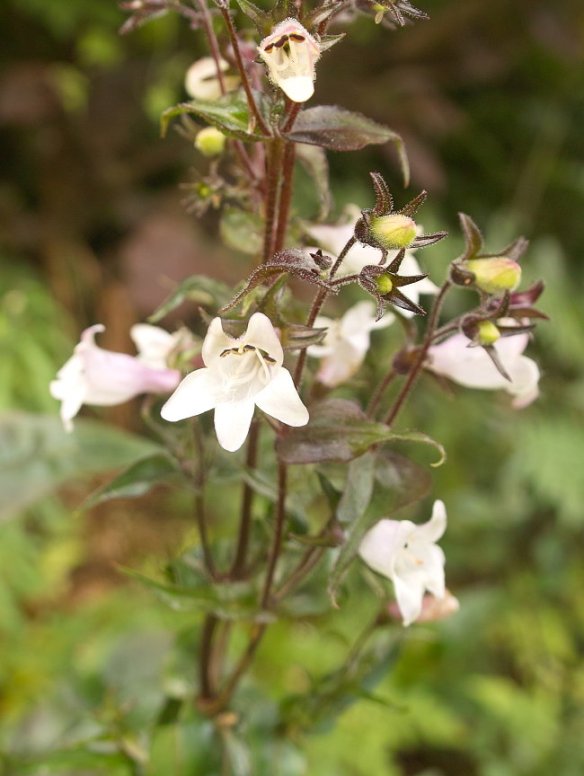 12. Dryopteris erythrosora. Difficult to choose just one of Fiona’s growing fern collection, but ferns perform very well with us in our damp climate and in early July, this species is very attractive with slightly orange tinted new fronds, amongst the more generally green palette of the other fern foliage. We now have a zero tolerance policy for ferns in most parts of the garden – they can quickly become dominant thugs, and require a huge amount of effort to remove a large specimen, but on the North face of our big oak tree, they illuminate an otherwise tricky area. 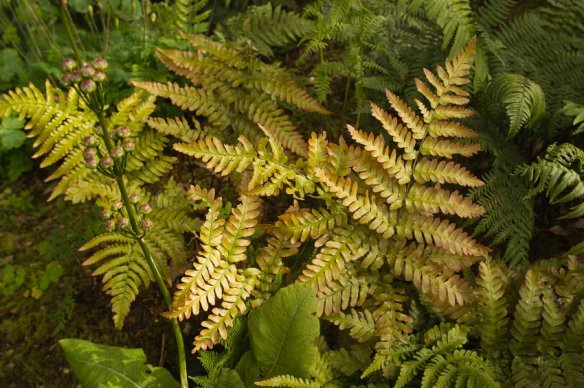 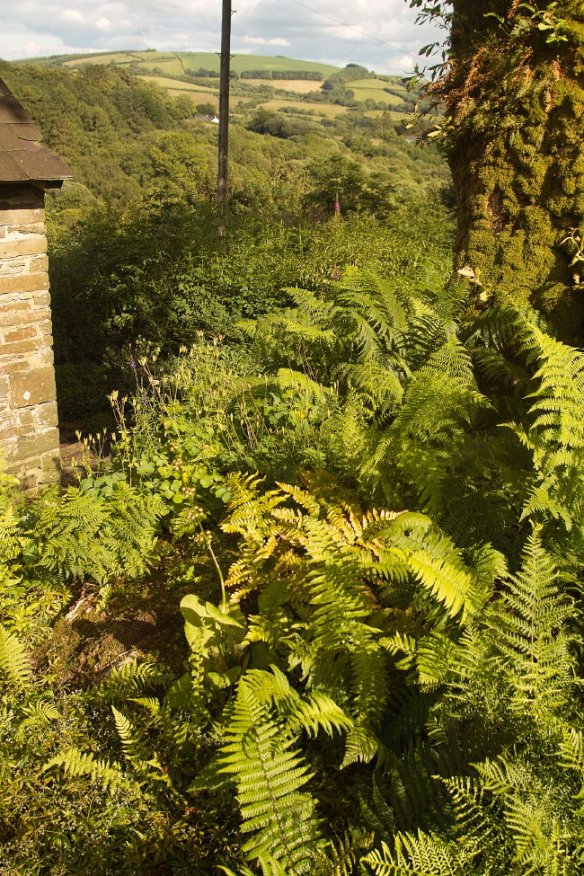