Last week the plea was for rain. 2 days later it thankfully arrived, but not before 2 interesting events which happened because of the long unseasonal drought.

The first was seeing smoke rising from an immature oak wood on the far side of the village, beyond the hill’s spur. Travelling that way a couple of days later confirmed that the under-storey leaf litter and vegetation had all burned off over quite a large area, with scorch burns several feet up the oak’s trunks. The smell of burned vegetation still lingered in the air, and I wondered whether the fire had been started with malice, or more likely the result of the very high temperatures at soil level, with tinder dry combustible material (over 60 degrees C measured here at soil level last week).

The other event was the large dinner plate sized pads of moss which had formed on the slates on the shady side of the barn roof all became so dry that in strong winds they blew off. Eight years of growth at least, but they were put to good use supplementing and restoring the mossy paths scratched up by the blackbirds in March.

Earthworms have been on my mind recently. I first started thinking about them in the context of soil fertility and mycorrhizal associations when I was harvesting the last of the very poor spindly leeks which had been grown in big bags filled last June/July with mixed up topsoil/subsoil from some groundwork. Although none of the leeks were much thicker than my thumb, I guess that about 50% had an obvious earthworm between the root system when the leek was lifted. 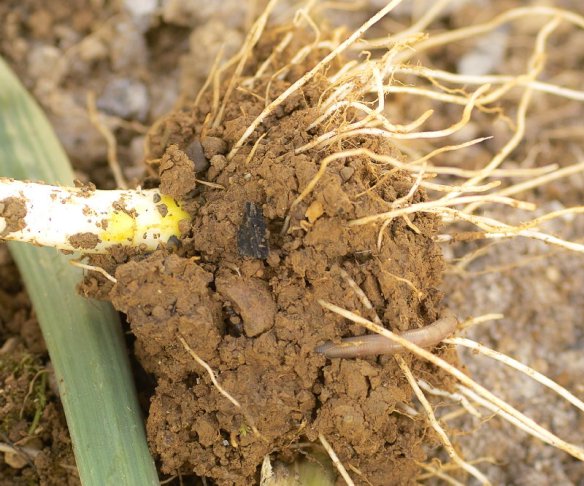 When I came to plant out the first batch of broad beans which had been grown in the same soil, with just a little added decomposed wood bark and leaf mould, in the greenhouse border, nearly 80 % of the tipped-out pots had an earthworm amongst the bean roots.

What was a striking contrast was that as I started to lift and replant the Narcissus ‘Topolino’ from an apparently identical Big Bag of soil to the leeks, for the first 3 weeks (10 bulbs lifted per week), not a single worm was evident amongst the plant roots, and barely a single worm was disturbed in the big bag soil. Now the statisticians will tell me that this is not statistically significant, but I have already raised the issue of why Narcissi often perform poorly in the second year from planting, and indeed this is why I am experimenting with the issue of when to move Narcissus bulbs after flowering.

About this time, I caught a BBC Radio 4 programme on earthworms by Sir David Attenborough which added some fascinating background information on the earthworm scene. Europe has over 200 species, and indeed there were that number once in the UK, but all were lost in the last Ice Age. Recolonization took place as the ice retreated northwards, but only 25 species made it back to Britain before sea levels rose and the English Channel was formed.

Charles Darwin studied them in great detail, and wrote a definitive work on their ecology, and more recently the English added another footnote to their eccentricity by establishing the annual World Championship for Worm Charming in Cheshire. Now running for over 30 years, anyone interested can see bizarre video footage, below, of hordes of teams each trying to coax out the maximum number of worms from their allocated 3×3 metre plot in the allotted 30 minutes, using only a garden fork twisted, twanged or tweaked in the playing field’s sward, with various musical accompaniments. The maximum ever achieved was 511 from one of these small plots, though last year the winner only managed 43 since the event occurred after a prolonged dry spell.

This confirmed another personal finding that I made for the first time last year. In periods of extreme dry weather earthworms aestivate, or become inactivate, to survive such inclement conditions. They evacuate their bowels, and often tie themselves into a tight ball. In the photo below you’ll see an actual knotted earthworm, which my grandson Dan and I found whilst digging up early potatoes last June. In the end we found 3 more.

Does this shed more light on the phrase ” Get Knotted”? … an aestivating, and knotted earthworm 15/06/10

I mentioned this to Charlie Martin who makes ecofriendly worm based potting composts locally when we met him, for the first time, 10 days ago at a Plant Fair near Cardigan. He’d never personally seen this – I guess all his worms are far too well looked after to ever become stressed in this way, but he did have photos of himself and a colleague bent over a sieve tray, and he explained that his limiting production factor is shortage of stock … i.e. worms. So they’re very careful about sorting the worms out from the compost, and also picking out worm egg capsules, which apparently when first laid are pale green, and easier to spot. Now that’s something to look out for, next time I dig the soil over. I’ve clearly missed them up until now.

All this background worm chat has taken me away from my interest in whether the apparent lack of worms around the roots of recently flowered Narcissus bulbs has something to do with the plant’s recognised toxicity, and also whether the apparent lack of worm activity amongst the roots has any bearing on the slowness of Narcissus to settle down in a garden setting and flower consistently.

Narcissus poeticus recurvens..”Old Pheasants’ Eye”. The last daffodil to flower with us, though 3 weeks earlier than last year. 28/04/11. But this area is still only producing about 30% flowers, the third flowering year from planting. Why does it take them so long to settle? Should they be sold ‘In the Green’ like Snowdrops?

I should add that the last 2 weekly batches of bulbs lifted have shown 2, and then 3 small worms present amongst the roots, as the leaves are starting to pale. As always, I turned to Google to resolve the issue of earthworms and fungal root associations (mycorrhizal associations), which I have mentioned in an earlier blog. Much to my surprise it let me down. There was no significant evidence of any involvement of worms in the root/fungus relationship that I could find. Indeed the first references were on the adverse impact of non indigenous earthworms on the Sugar Maple forests of North America, where introduced ‘foreign’ worms break down the deep leaf litter layer much faster than would happen with the indigenous worms, to the evident detriment of the Maples’ growth.

But apart from that, the only information I could find quickly using the search “earthworms arbuscular mycorrhizal associations”, was a research paper published as recently as 2008 in Germany, where no significant effects were noticed with the growth of 3 plants; (one grass species, one legume and one herb)  their mycorrhizal partners; and earthworms in the surrounding soil. I am really surprised that more does not appear to have been written on what must be a significant aspect of below the ground interactions which have a vital impact on how well plants might grow in our fields and gardens. I think that there may well be more going on here than is currently understood, but for now that will remain supposition.

From earthWORMS and roots to WORMalds and roots… A recent multi-generational family gathering in Birmingham, had the added bonus of collecting a family history collated and produced with thoroughness by my mother’s cousins. One of the interesting details included was that my great great grandfather, John Stephens, was born about 40 miles away at Bosherton, and that his family had been involved with the call to arms by Lord Cawdor to rush to Fishguard in 1797 to repel the threatened French invasion (the last to occur on British soil). The French were so put off by the sight of so many folk (including Welsh women in traditional red and black dresses summoned to help out by marching round the hills), that they aborted their mission. But it’s great to feel that we share a genuine historical tie to this part of the world which seems permeated in many ways with history, magic and myth.

One of the appeals of recording images and thoughts linked to this place, at this time, in this blog, has been reinforced after the several recent trips to Shropshire which we’ve made to help Fiona’s mother prepare to leave the family home of nearly 50 years. Memories stay in the minds of the beholder, unless recorded in some way, and whilst there for the last time I happened to see in the daily paper that Giverny (Monet’s Garden) now has a new head gardener – James Priest from Liverpool. And that for all of the half a million annual visitors now attracted to Giverny, within weeks of Monet’s death in 1926 the garden was becoming neglected. The flower beds were turfed over by his son, and it wasn’t until the late 1970’s that its restoration was undertaken, using notes and of course the artist’s paintings to re-establish the planting effects Monet had painstakingly created. 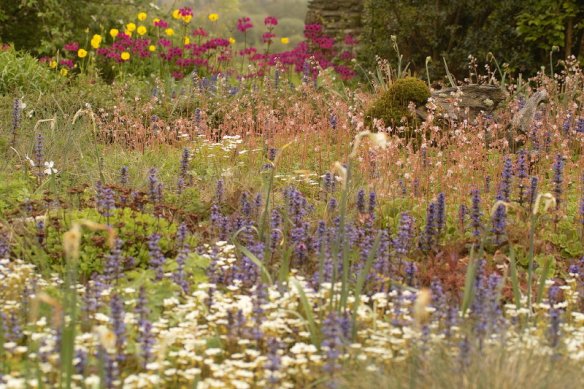 Some of our own efforts at impressionistic planting in the Welsh hills…….. Terrace garden 9/05/11

So what anyone does in crafting a garden is rarely likely to survive the passage of the generations in any retained physical or natural form. However perhaps it is in the long, drawn out, but ultimately ephemeral battle to temporarily influence and control natural forces, that the real appeal of making a garden lies. 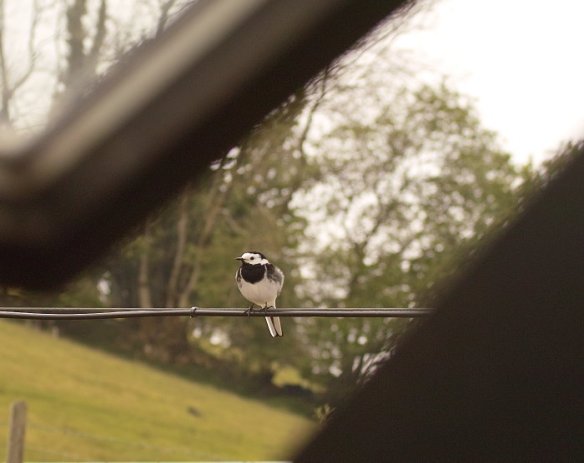 Today as I write, it’s a Pied Wagtail that watches my efforts from the catenary wire 11/05/11

8 thoughts on “Rain, Worms and Roots”