A fortnight ago, we headed down to the National Botanic Garden of Wales (NBGW) for their annual Wales Fungus day event. In spite of a poor forecast, as always there were several interesting talks and events laid on, including their displays of locally found fungi.

Since our meadows have continued to produce a diverse range of waxcaps over the last 2 months, I thought I’d pick a sample for the NBGW fungi table display as I’d done a couple of weeks earlier for the autumnal Carmarthenshire Meadows Group meeting.

It is quite amazing to me how these nationally rare, at least in the whole of the UK, colourful mushrooms, have been thriving and multiplying ever since our land management has changed in recent years, and these photos give another idea of what one can find in a quick walk around our fields at this time of the year.

We opted to take the slower, back route up the mountain to the NBGW, since we’ve just acquired a couple of e-bikes, and wanted to check out the hilly back road terrain (more on these once I’ve worked out how to take good photos from our forays). As a result, we passed an amazing colony of Fly agarics, Amanita muscaria, just beside the road and carefully picked an enormous pristine example to add to our own mushrooms. 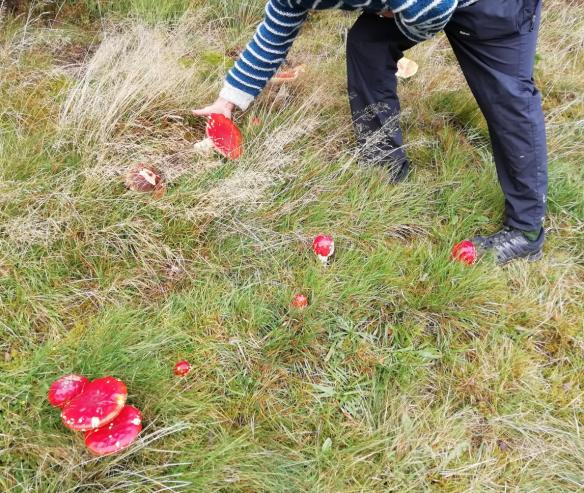 Notice the edible Cep bolete mushroom, Boletus edulis, below right – Bruce Langridge later explained that these are often found growing in the same site as the poisonous Fly agarics. 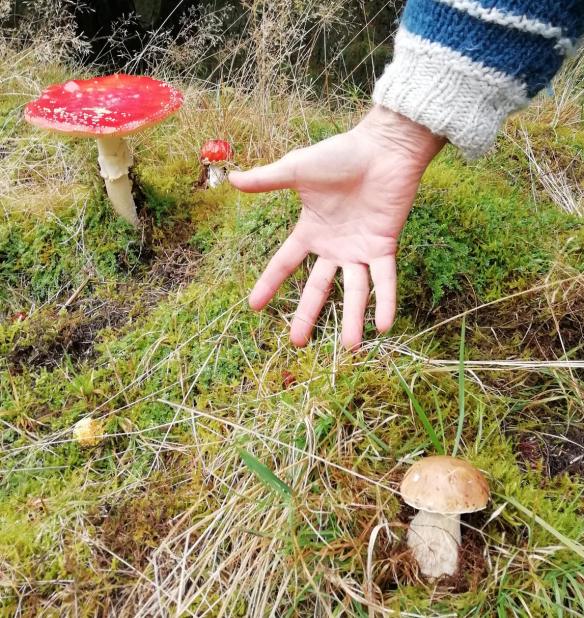 This glorious red and white mushroom turned out to be one of the stars of the display at the NBGW, below, and none of the fungi experts present seemed to recall ever seeing one as big. Bruce Langridge, the NBGW’s director of interpretation and guiding light behind the interest in fungi at the NBGW is indeed the man responsible for establishing a National Fungus day, now held annually across the UK. He was delighted to see our waxcaps, since the Garden’s own meadow waxcaps had largely finished fruiting.

In an interesting chat with Bruce and a research student who’s about to begin a project to see if he can grow waxcaps “artificially”, I mentioned that I wondered whether slugs might play some role in the germination of their spores. To date no one has been able to culture waxcaps. It’s known that they thrive in mossy turf, but simply taking the spore laden mushrooms and putting them into a new area doesn’t seem to work. We speculated why this might be. My own thought is that perhaps the mushroom spores need to pass through a vector like a slug and that the spores are activated in some way by passage through the slug’s gut.

Back home, a bit of research discovered that it’s been established that both ferns, lichens and liverwort spores can all pass through a mollusc’s intestine and be viable and germinate afterwards, thus allowing the potential for spreading a species over a wider territory. Click here and here for more. Such gut transmission and priming of seed for germination is well known with many plant seeds, and if ever proven with slugs and fungi could be considered to be another example of endozoochory, a new word for me, meaning seed dispersal by being carried within an animal in some way. It would be interesting to know if this is why waxcaps have done so well in our fields. Although the huge slug population which for many years existed here, is still currently in drastically diminished numbers. 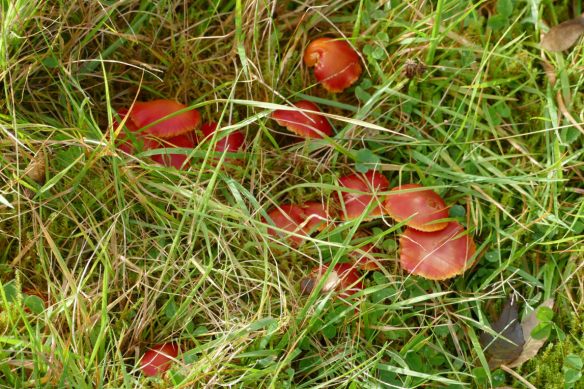 A fortnight after this Wales Fungus day, and nearly 2 months after the first wave of orange red Fibrous waxcaps, Hygrocybe intermedia, appeared around the turn of August, we still had some vibrant examples (above, probably Spangle waxcap, Hygrocybe insipida, ) which had recently appeared for the garden visitors who bravely chanced a trip out a day after the wettest 24 hour period we’ve had since last year’s named storm Callum hit us.

69 mm of rain had fallen in 24 hours, leaves littered the yard and paths, but fortunately our hilly site means the rain rushes away quite quickly, and the sun shone benignly for Sunday, although a chilly Easterly wind had picked up.

Even more unusual for our visitors, was the crop of mushrooms which have appeared on our mossy croquet lawn this year. At least 7 species, but the highlight for 2019 has been the number of Earthtongue fungi, above. There are several different species of these in the UK, (Geoglossum and Trichoglossum being the most common genera) which are quite tricky to tell apart, but all are considered rare. Click here for the best guide to identification I could find. They contribute to how highly rated a site is for fungi diversity, so increasingly our “impoverished” land seems to be moving into being a grassland fungi hotspot. Earthtongues are some of the last grassland fungi to actually push their fruiting bodies above ground, and in contrast to many waxcaps, the black tongues also survive for several weeks, in spite of the occasional frost which has already affected us. 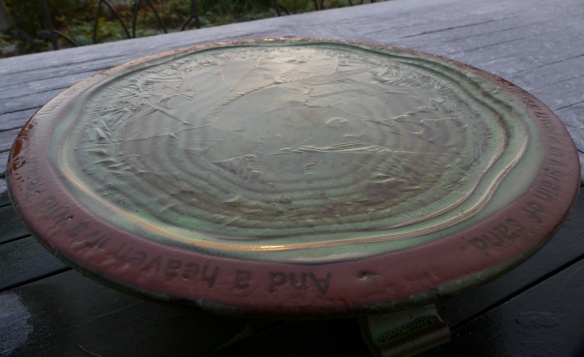 Like many other grassland fungi, these would quickly be driven out of the mossy turf by any conventional lawn treatments aiming to create a more uniform weed and moss free green lawn, which we’ve never used here. Click here for more on grassland fungi ecology in a good review (by Griffith, Jones and Easton). In future I’ll set the lawnmower blade a little higher as we head into late summer to try to encourage these even more.

This year there are hundreds of these Earthtongues appearing on our croquet lawn, adding an eerie touch to the garden as we approach Halloween.

Three still mornings, breathless as I take my seat,

Beneath the angled front, the dark tongue, a stationary spear,

Licks, probes, darts, yet unmoved, or moving, at the very margin

Spread light, above this land.

Burnished, wrought, and beaten by some hand invisible. 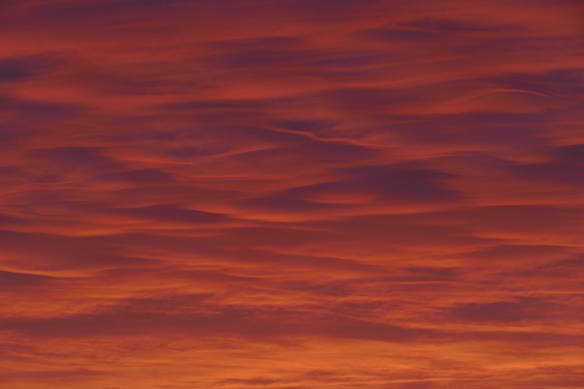 Deep beyond the molten golden swirling pools and waves,

Which wash above, and back in time. 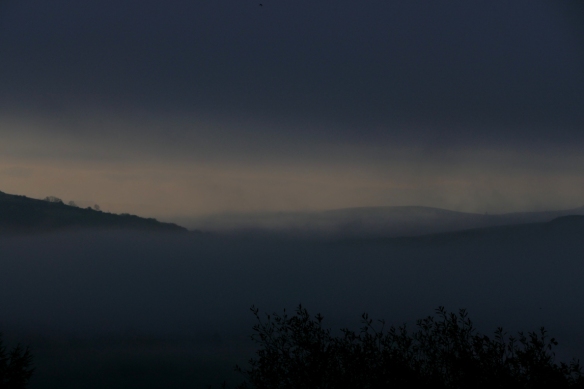 Is this the same imagination, breaking time and place?

The grey quilt moulds the sounds and trapped beneath,

A rare and constant rumble, links those tarmac treads,

Echoes round the misty whitewashed cwms,

Tracks left to right, then fades behind the beech topped castle mound. 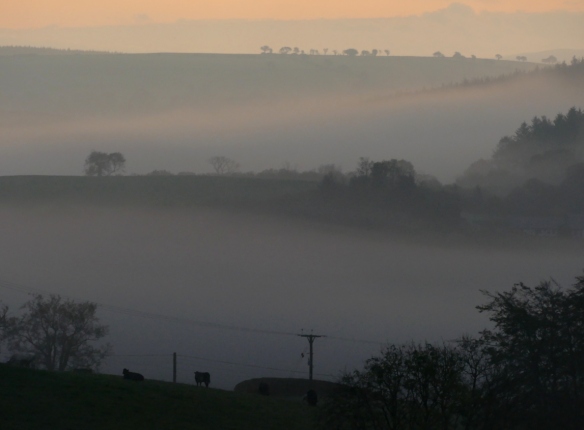 Upon this ancient fortress top. 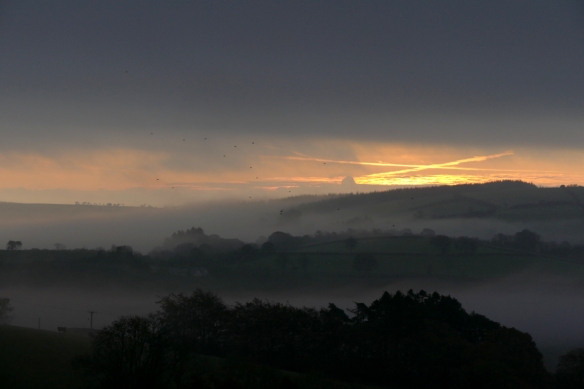 The crossed swords in the distant sky disturb. Threaten. And autumn’s first

Where are the white robed men? The ancient noble bards

Long since departed, to read these runes? 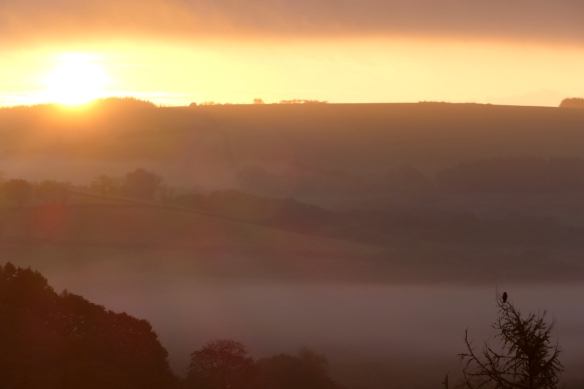 Is there no hope? The feathered crow, black, not now gilt edged

Solitary atop the dying larch, watches,

Warms and, turned away, is gone.

What is this heavenly text? Then there, to speak, three dark mouths open,

Away for me to catch these cloud-borne clues.

Before the white suits come to take us all,

Before the dying shepherds leave this green, green grass

To serried needled ranks, the oak’s curled leaves are shed.

All thin though feasted, for feast they must,

Yet failed, inside their cocooned tombs.

Now’s the time, the Earth answers,

With tongues. Black and hard and hairy, death’s prophets

A hundred times and more.

Will cope with such poor pickings.

These lipless tongues contrive to

“Lean down. Stoop and feel our mouthless cold, cold breath while you can.

We need no lawyers, have no rules,

And when it snaps,

The living and the dead, millenially linked.

Click here, to listen to the fascinating story of the Mold gold cape, a new discovery for me, and it seems from recent conversations, to many of our friends. It dates back thousands of years, and featured as one of the top artifacts from the British Museum’s collections chosen by Ian MacGregor to illustrate his “History of the World in 100 Objects” series and book.

Click here, and here for more on the Celtic origins of Halloween, and their ideas about blurred links between the living and the dead, the light and the dark.