Autumn has arrived here early, in the last 48 hours.

Even if the air is still warm.

After what must rank as one of the best summers we can recall here, life can calm down a little, with some wet weather, and the garden moving into a new seasonal phase.

So, we’re planning a pop up garden opening for charity for the NGS on Sunday August 18th for anyone who wants a chance to visit the garden at this time of the year. 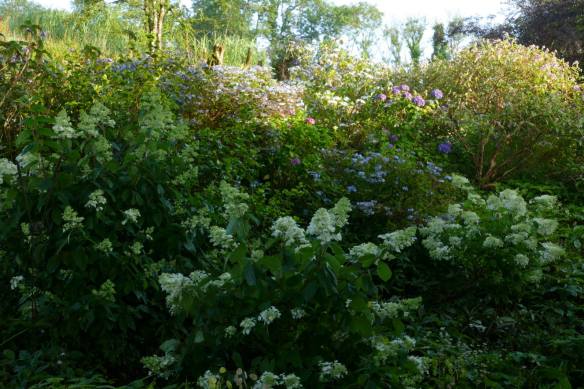 It’s unlikely that the weather will be brilliant, but it will probably be our penultimate garden opening for 2019 – we hope to hold one in October to catch any autumn colour, and later flowering perennials.

The photos here were all taken within the last 10 days, to give an idea of what parts of the garden now look like, though this will inevitably change with lots more Cyclamen emerging and some wind and rain damage.

I haven’t written much about the vegetable growing area so far this year, but apart from growing some different sections of annual bee and insect friendly flowers, a few new ideas have been trialled.

Just 99 p for 800 pelleted Early Nantes 2 carrot seed from Premier seeds, seemed a real bargain, click here for details. The tubs were kept inside by the stove until the seed had germinated, then moved to the greenhouse, and additional bubble wrap laid over the tub tops on really cold nights. Once the weather warmed in April, the tubs were placed outside on old racking, and covered with enviromesh.

The first even and pristine carrots were pulled in early June, and since then using a gradual thinning approach, a crop has been pulled at roughly weekly intervals. We still have many meals left, so they’ll take us past the point where the soil sown carrots begin to crop. A real bonus is how easy it is to harvest them – last week our 2 youngest grandchildren (2 and 4) who were here for a week, delighted in taking it in turns to pull carrots for supper, and twist the tops off.

They even enjoyed eating them!

Secondly, the areas between the PV panels have at last been cropped successfully. A big issue here is the variable cast shadow, which first disappears from these beds completely as we head towards mid-summer, and then returns, tracking ever Northwards, as autumn advances.

I reckoned that if I started my squash off early in the greenhouse in pots, then planted them out in early May, they could be planted out at the shadow’s then Northerly margin, and guided up a simple wood and old stock fencing angled frame, so that the leaves in late July, and any developing squash, would be kept up nearer the sunlight, and more importantly well away from the moisture of the ground. In early spring a strip of Phacelia tanacetifolia was sown as a quick nectar/pollen cover crop at the very Northern edge of the bed – hugely popular with bumbles and later on honeybees, but I do wonder if this profusion of flowers distracted them away from the earliest squash flowers?

The other feature of these woollen sheets is that they allow water through with no problem, but dry really quickly on their upper surface, so in a dry year like 2019 significantly help to retain soil moisture. The trapped air in the wool, and the water filled bottles aids heat retention – critical when the squash are small. Early on in the season, all the plants had enviromesh draped over them as well to protect against cold nights.

With a possible 6 weeks or more of potential squash growing season, the crop is already looking better than any I’ve managed before, and the location between the panels protects against strong winds from at least 180 degrees.

With such a lovely summer, and many opportunities for small scale hay making, there’s been masses of collectible seed produced by different meadow grasses and flowers.

This year we’ve used green hay from our upper, more florally diverse meadow to begin to spread more flowers into our other fields. It’s surprising how even our very young visitors enjoyed helping Grumpy with sticks or boots, flicking the seed laden green hay around. 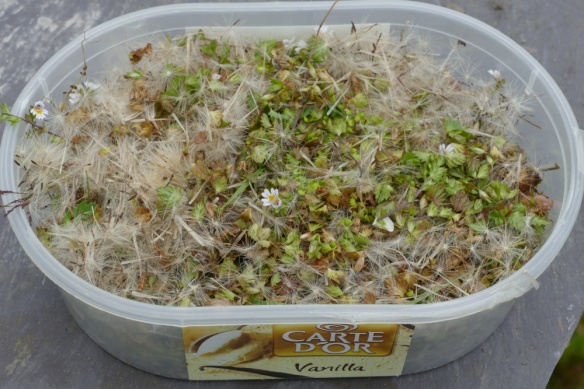 In addition, I’ve collected seed from Snake’s head fritillaries, Fritillaria meleagris, capsules in the meadow and Camassias currently growing in the garden. On the advice of a friend who’s had great success naturalising these, the seeds of these bulbs were laboriously “sown” rather than simply scattered, by working across the upper hillside, sloping meadow with a lawn edging half-moon, and about every metre or so, making a shallow groove/slot in the turf and sprinkling a few seeds in. Really a two person job for a dry day, and as we removed swathes of hay, William and I worked our way up the hill in this way. 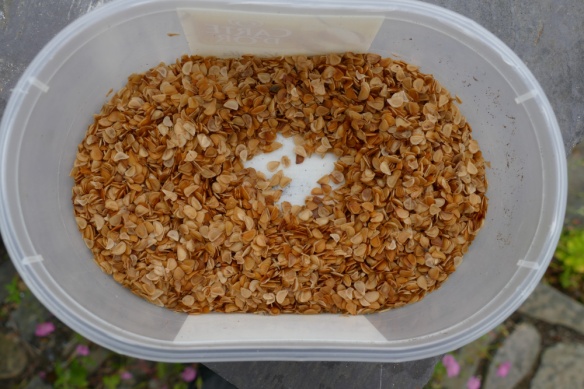 With about 7,000 gathered fritillary seeds, and about a half dozen per slot, you can imagine that this is tedious work. However the plan is that if a fair proportion of these mature into flowering bulbs in 3 or 4 years’ time, I’ll simply then allow any seed to fall naturally.

Or better still cutting and turning for hay should then more easily and quickly spread these lovely flowers around. As well as creating the chance to harvest green hay, complete with this sort of diverse seed mix. 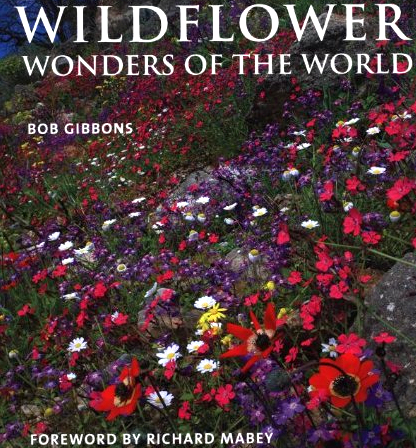 I recently bought a copy of Bob Gibbons’ lovely book “Wildflower Wonders of The World”, which features 50 wildflower rich sites from around the globe. Well worth acquiring for an inspirational read.

The flora of the Burren from Ireland; a scene of the machair from the Outer Hebrides; and the coastal flora of the Lizard in Cornwall are the only images of wildflowers from close to home, which seems a real shame. Bob gives advice for visiting all of the sites included in the book.

But isn’t there a need to enthuse UK residents with the awe inspiring images of such natural plant communities without hopping on a plane to a distant land to experience being amongst such beauty?

This week has seen yet more pressure heaped upon traditional British pasture land management grazed by herbivores which are subsequently harvested for meat, by the mainstream media’s reporting of the latest IPCC climate change report – “Climate Change and Land”, click here.

I’m hoping for even more below the surface sequestered carbon, in the form of all those extra bulbs which should develop in just a few years. As well as providing a vibrant long season of interest above ground with huge appeal for invertebrates, birds, and herbivores, and a visual feast for any who explore the meadows.

However, the rabbits may put paid to my best efforts. Time will tell. 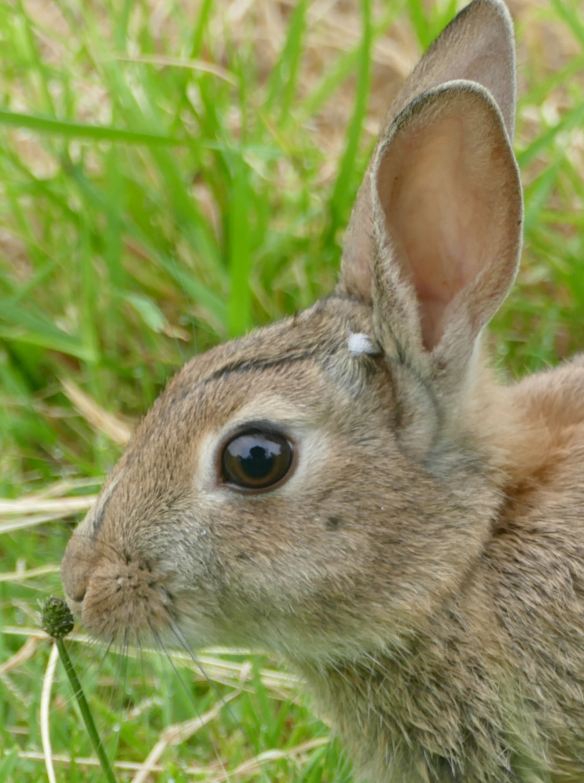 In a final reference to quality time spent with delightful young visitors, it was wonderful to be able to demonstrate to keen youngsters from the next generation just why yellow rattle is so called, and then after climbing longevity hill, observe them whizzing down the hill from the Hut.

Suddenly they peeled off ahead of me, into the regrown aftermath from the very first cut of hay, and spotting a single big yellow rattle flower, took a while to work out how to pull off the seed heads on a plant still a little firmly anchored in the soil, and to its adjacent, parasitised grass roots.

We also had fun catching grass hoppers, something I haven’t done for a long time, but in my own teenage years I recall doing so on a few family caravan based holidays, where we used them as bait for wild Austrian trout, in rushing alpine streams. 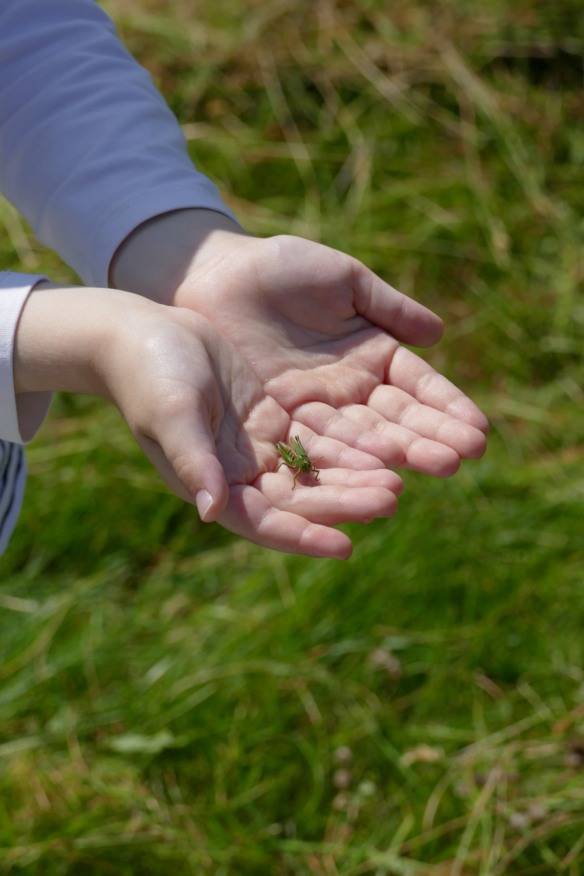 There’s a good guide to identifying different grasshopper species, click here, and this year a quick recce seems to have identified at least 3 species in our meadows. (Field, Chorthippus brunneus, Meadow, Chorthippus parallelus, and Common Green, Omocestus viridulus, in the images below). As well as having certain distinct physical features outlined in the above link, they also all create different stridulation sound patterns – made by rubbing legs and wings parts together.

August 1st saw our annual Welsh fifteen moment, when we counted more than 15 butterflies around the Buddleia bushes. Some things here never change, although as with plant flowering times, the date for this event is very variable, from late July to nearly the end of August.

(Extract from the poem ‘In Translation’ written at Gelli Uchaf in 1995 by Mark Wormald:

‘The butterflies were out around the buddleia; a Welsh fifteen,

Geese down the lane were squinting in goosed rage,

at some Cyclops in the brambles, unseen…. ‘) 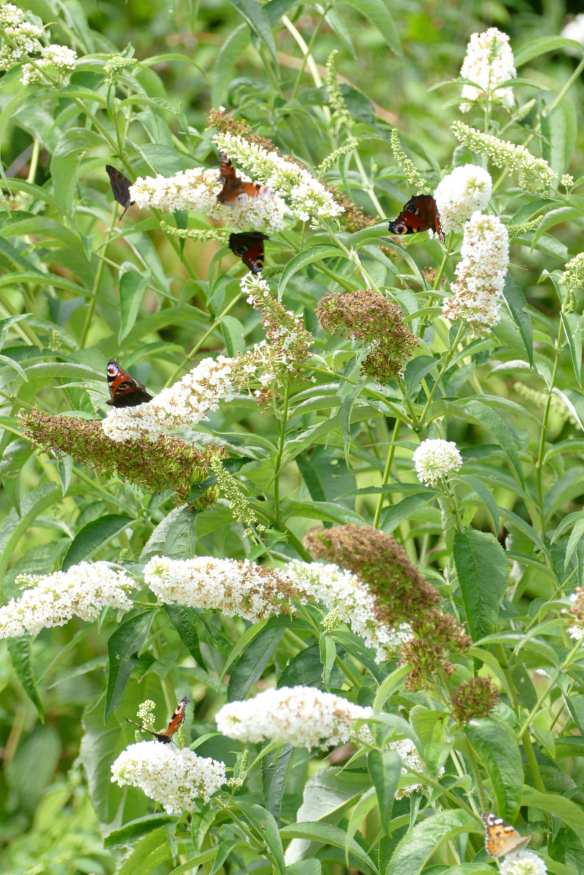 A few days later this number had swelled to nearer 100, as dozens of immigrant Painted ladies, Vanessa cardui, appeared in the garden and meadows, in one of the biggest influxes for a decade.

It was also a delight to find a couple of male Beautiful demoiselles, Calopteryx virgo, along the stream – amazing survivors from the combination of last year’s severe drought and then autumnal storm Callum’s extreme flooding of Afon Melinddwr.