Survival is a common thread here. 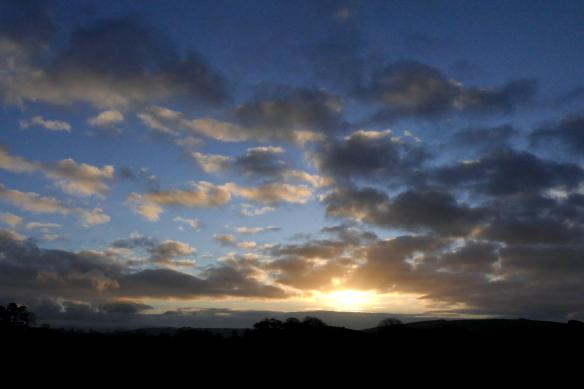 Trivially, WordPress have just reminded me that I’ve now been writing, and photographing for these posts, for 7 years.

I’ve survived for that long.

This surprised me – that on one level I’m still wanting to spend the time doing this, and indeed sharing thoughts and ideas in a public place. With no economic reward. Not at all an entrepreneurial activity really, which is how I spent much of my former existence in one way or another. Striving to achieve, compete, and certainly do more than just “survive”.

Yet I’m still seeing things which excite me, either in the garden, or on our few acres, which make me realise how little I know or understand about how the bigger natural world interacts, and how, here, survival really is the name of the game.

Even just on an often wet, bare Welsh hillside. 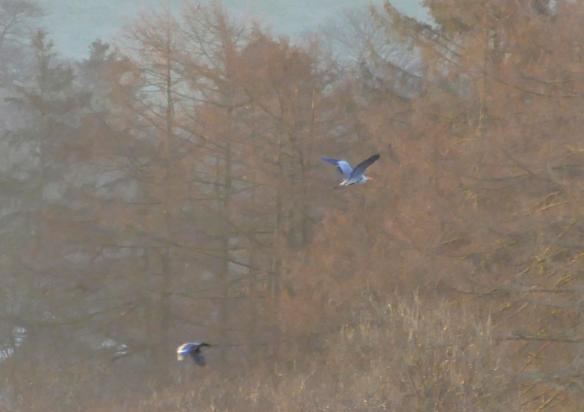 As a theme, it seems that this is beneath much of current, and largely urban based human thought, endeavour, or artistic creativity.

Our species often now seems to have moved beyond thoughts of such basic contemplation. Only occasionally having the fragility of human frailty brought into clearer focus by events closer to home. Perhaps this is why I enjoy the insights which ordinary folk, with no one to answer to, can share through today’s interconnected world.

So, as I began this post many days ago whilst our ground struggled to return to normal temperatures after the Big Freeze-Up, (or more correctly, Down, since soil is still frozen once one gets down 2 inches), a few vignettes of true local survival skills. 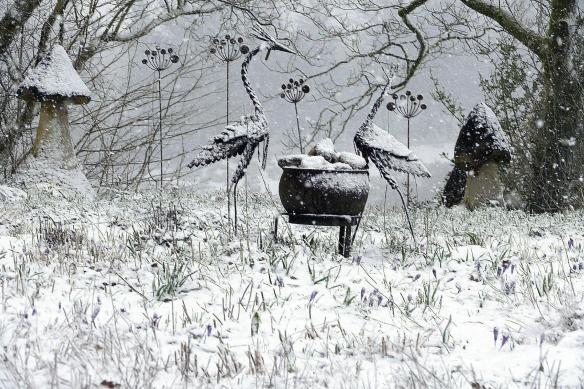 Beginning with the efforts of a single song thrush, Turdus philomelos.

Unperturbed by my presence beneath the drip line of our cottage slates, camera to my eye, it systematically scanned the west facing, and warmer, aspect of the fern and lichen adorned stone wall. Clearly seeking snails. 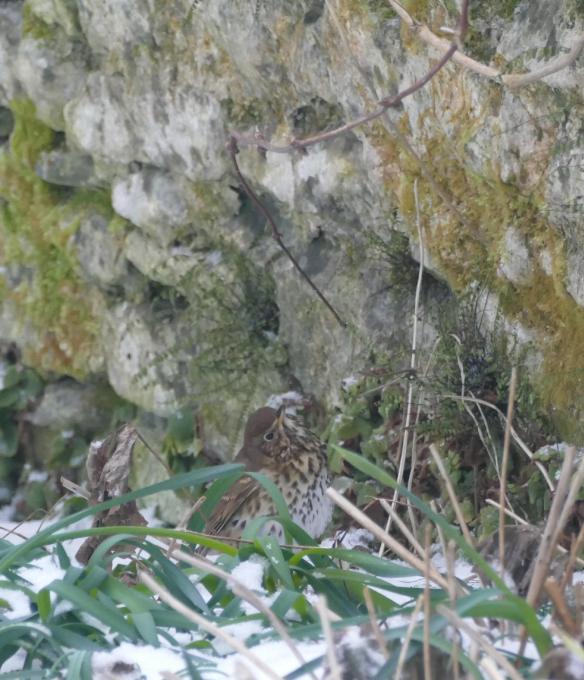 At a time when much of the landscape, and available food sources were inaccessible. 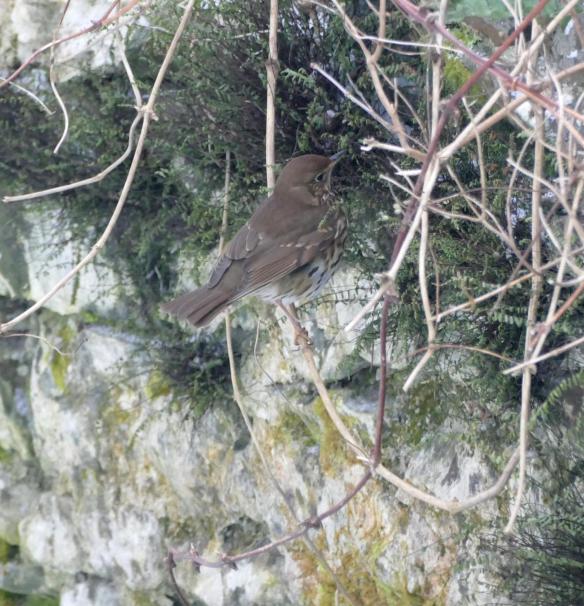 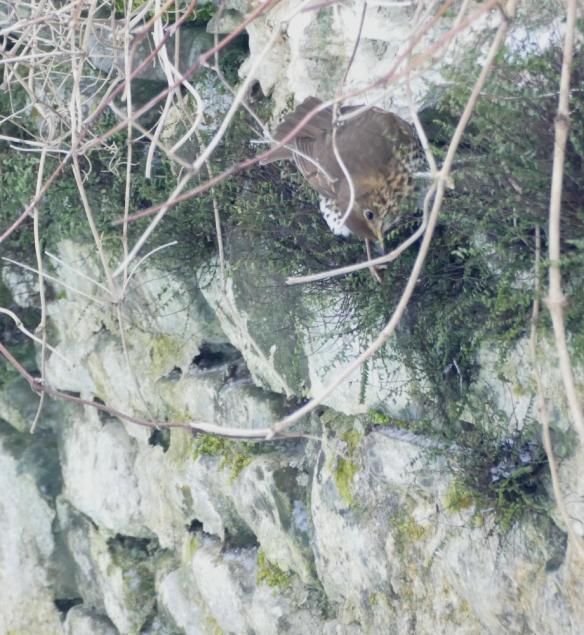 Eventually it reached a point where it must have spotted something from its ground level vantage point, and repeatedly took off, trying to cling to the scraps of foliage whilst attempting to probe for a morsel. It was sufficiently excited to briefly chatter noisily, but in spite of repeated efforts, I don’t think it could winkle whatever it had seen out of its rocky refuge, and eventually, empty beaked, moved on.

Now, read a story from sets of tracks on our snowy magic terrace garden. The couple of inches of snow which fell at dusk made for an interesting dawn dressing-gowned walk. But what happened here?

The familiar bounding rabbit tracks are clear, but joining them another set. A fox perhaps?

Rewind and try to work out the nocturnal scene, and chase.

Rabbit enters stage North, passes through the upper archway, out of the magic terrace garden, and then, turns back.

Leisurely lollops along, about 2 feet gaps between tracks. Without my pee marked posts, thanks to a frozen watering can, it returns, crossing the central snow covered terrace and picks up the most easterly, curving crushed slate path.

Just before a magic wooden mushroom, to the left, something dramatic happens.

The gap between foot touchdown extends. To very nearly 7 feet. What a leap.

The other set of predator tracks has crept up, hidden by the slope, and maybe, tracking its prey’s progress now closes in.

The rabbit explodes away. The fox lunges. The Southerly arch is reached in a flurry of snowy dust and strained sinews.

The rabbit curves right, beyond the inscrutable pheasant and at last is safe. Bounding up the hill and past the big bag bottle banks.

The fox gives up, and maybe that night, goes hungry. 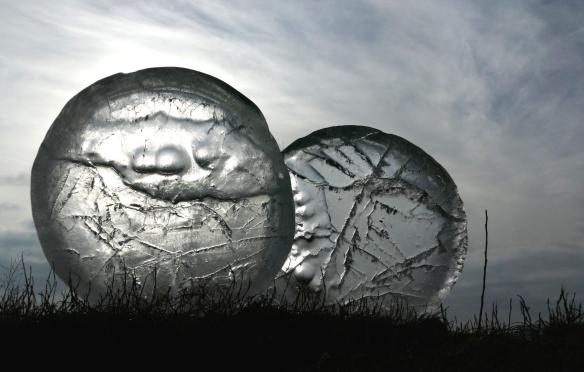 So strong the winds, that sucked the warmth from chilly stream.

So hard, the sodden slippery pastures, morphed to granite slabs,

Before the gentle flakes fell, soft, at dusk. 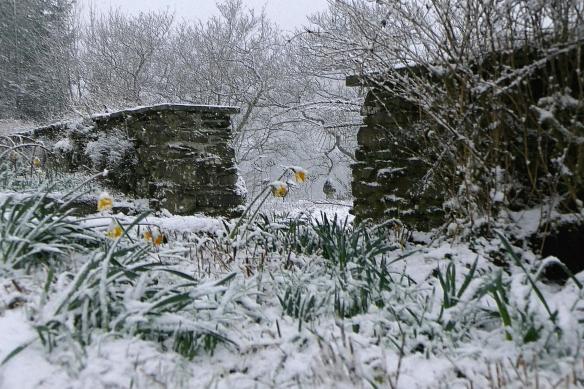 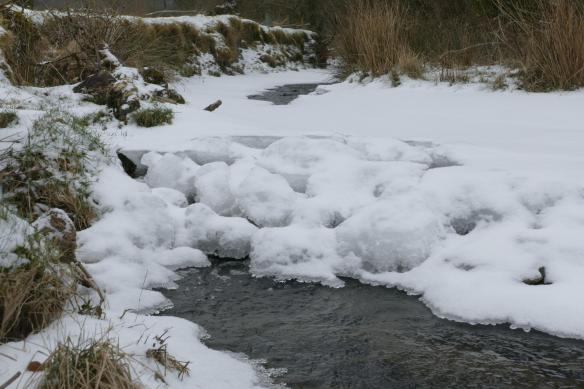 Now equal battle, this is not. The hunter – double goat-socked, booted,

Traipsed past hungry ewes to start the flush.

But unseen eyes and barred-backed, feathered 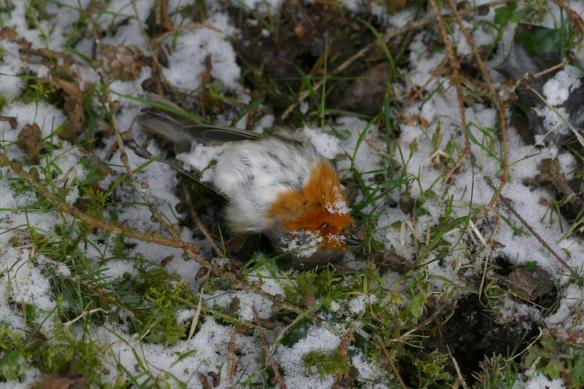 If only I had braved this tingling Arctic blast unhurried,

Perhaps I would have seen.

If only I had twitched my finger shuttered

If only, quickly, swung my clumsy arms round, wide,

Perhaps I would have snatched the perfect shot.

But every time, ignoring glasnost, 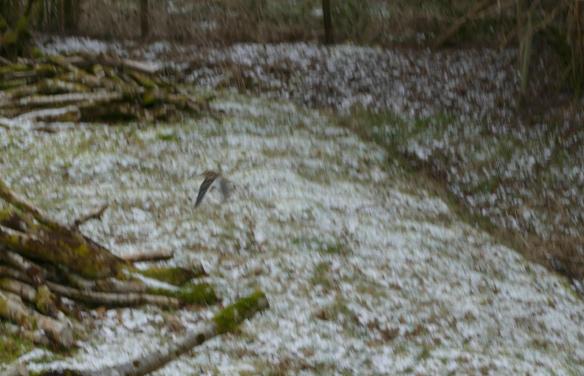 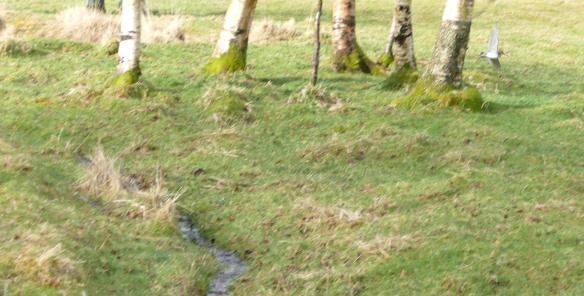 Patiently, the hunt resumed along the quarter-mile

Patiently, and quietly, my un-camouflaged figure

Scanned the drab scene, feet ahead.

Patiently, I never guessed when next the feathered shotgun

Blasts before me – every time surprised.

But every time for days, at dawn, and dusk,

This thrill was life. Silently beguiled. 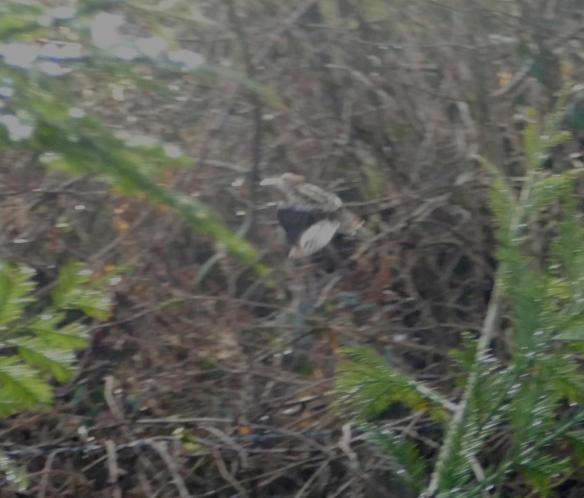 Exactly how to word this flight? Zig-zagged for sure,

Though always unpredictable, to left, or right.

Exactly how to hue these blurry scenes? Seen early,

Against the trees, now browns and beiges, triple bars in cream. 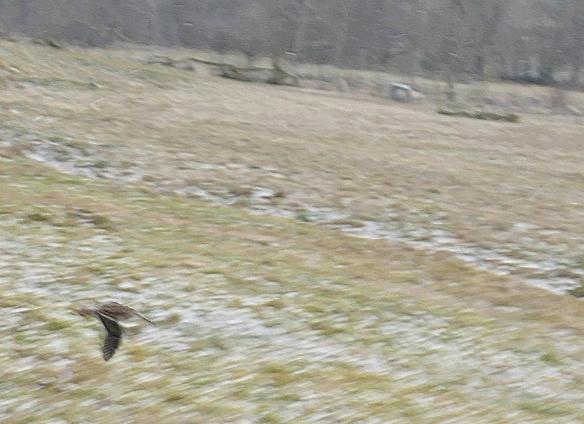 Regrets? The rain’s returned. The thaw’s set in.

Regrets? The four, per walk, perhaps not quite collectively, a wisp,

For such explosive onomatopoeia sums them.

But for this Sniper? Mystery glimpses, snippets, snaps, of life’s rich glow,

In the garden, the miracle recovery of freeze-dried plant foliage has amazed us both. Eventually the return of rain, along with a gradual thaw over many days, revived the garden scene, from this. 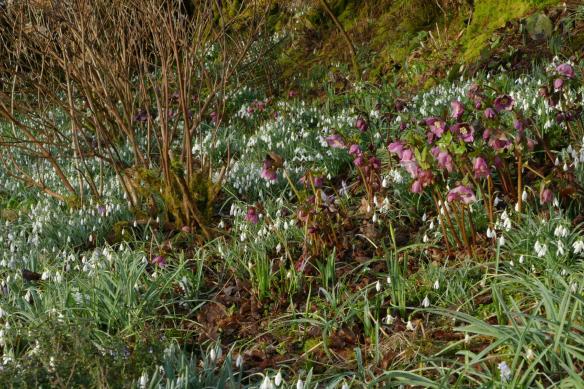 It seems that some of the science behind this has only very recently begun to be understood. And needless to say, this has fascinated me. However, since I seem to have rashly agreed to once more stand up in front of people next winter and talk a little about my passion for snowdrops, I want to retain a little secrecy for now. Anyone interested in more can trawl the pages of scientific papers and reviews. Or wait for 2019.