How do flowers open?

Almost in the twinkling of an eye, and in this chilliest season of the year. 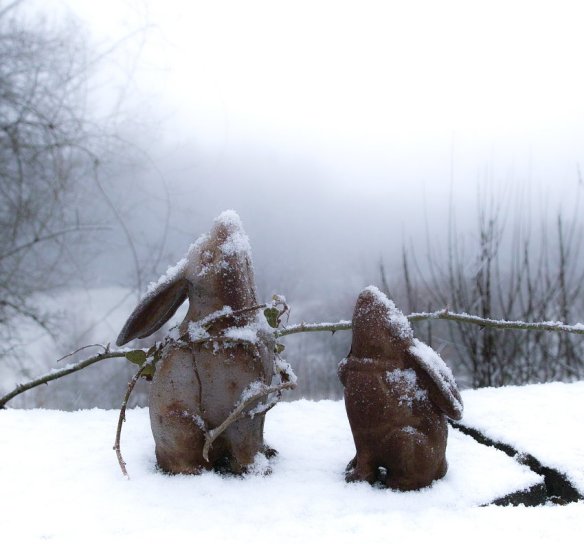 The rose can’t manage it, even in the warmest of summer days – the bud unfurls gradually on one occasion, and that’s it. It never closes.

But then it doesn’t need to.

The optimistic first daffodil of the year, the reliable Narcissus ‘Rjinveld’s Early Sensation’ was bowed over by the light snowfall, but remains steadfastly open, trumpet flared defiantly and baring all its vital innards to the elements, night and day.

As temperatures linger day and night just around freezing, and hail and light snow dusts the autumnal leaf litter remnants and banks of moss, I’ve been trying to understand the supreme abilities of early season crocuses to bloom at all in such conditions. Real botanists should excuse any shortcomings in my understanding. 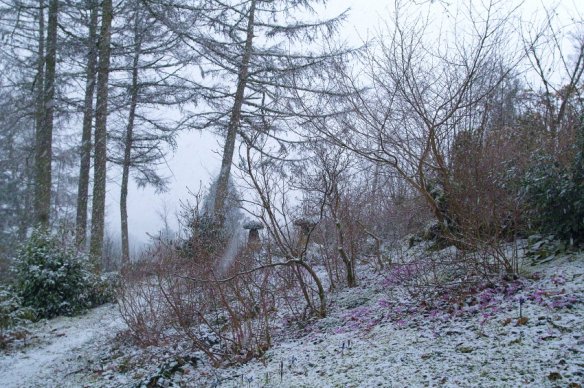 The crocus corm is actually a very shortened one year old stem, that’s a storage organ packed with nutrition from the previous season’s growth. On top of the corm is a shoot. The carbohydrate energy from the solid corm, different to the individual storage scales of a normal ‘bulb’ which consist of the remnants of previous season’s leaves, powers the new season’s flowers and leaves, and when growth is completed, the old corm shrivels and one or more new corms forms at its base.

There seems to be a possibility that the utilisation of stored starch in the corm which is powering early season growth, through a form of thermogenic respiration, is actually sufficient to melt ice and snow to allow the flower bud to force its way to the surface. Click here for more. (My original reference is no longer available, so this is a later, though more extensive review of this fascinating topic).

But once above ground, what to do with your precious, fragile flower, when the wind blows and the hail clatters down?

This year has seen a classic weather sequence where many of the very early season’s flowers are above ground, but temperatures are just too cold for flowers to open – for those that need to – crocus and snowdrops, which is of course their evolutionary imperative.

The other stalwarts of our late winter garden – Cyclamen coum. 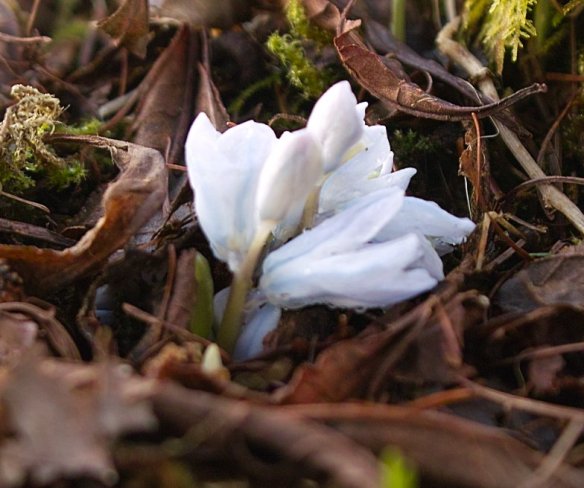 All have flowering strategies that produce a permanently open flower once it’s above ground. So, they have no need to open and close. The downside to this approach is that their vital flower sex organs are also more exposed to the vagaries of the weather, and damage, or simply loss of nectar and pollen in conditions when it’s just too cold for there to be any self-respecting pollinating insects around.

We love the brief blast of colour that Iris reticulata ‘Harmony’ flowers give amongst more pastel shades, but they rarely survive more than 7 to 10 days before keeling over. Even if a hardy slug doesn’t nip their flower tubes before this, and accelerates their demise. 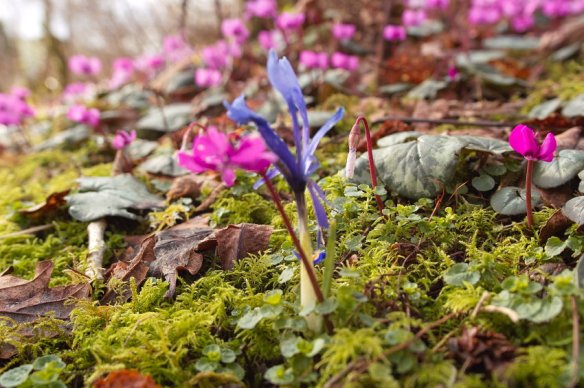 I was trying to track down just how many flowers a single crocus corm could produce, since I’d noticed that in the case of our earliest flowering Crocus sieberi atticus ‘Firefly’, it’s now been a month since the first flowers pushed through the ground, and we haven’t had a single occasion when it’s been warm enough for them to open fully. In early January a few flowers catching some strong sunshine managed to limber up and stretch their petals briefly so that there was a glimpse of stamens and stigma.

I struggled to find definitive answers to this question of flowers per corm – certainly saffron crocuses can produce 4 flowers per corm, and the concept of sequential flower production over a period of time would seem a good strategy to avoid all of a season’s flowers emerging, only to be clobbered by inclement weather. Our firefly candles produce at least 2 per corm – I’ll start checking for more. 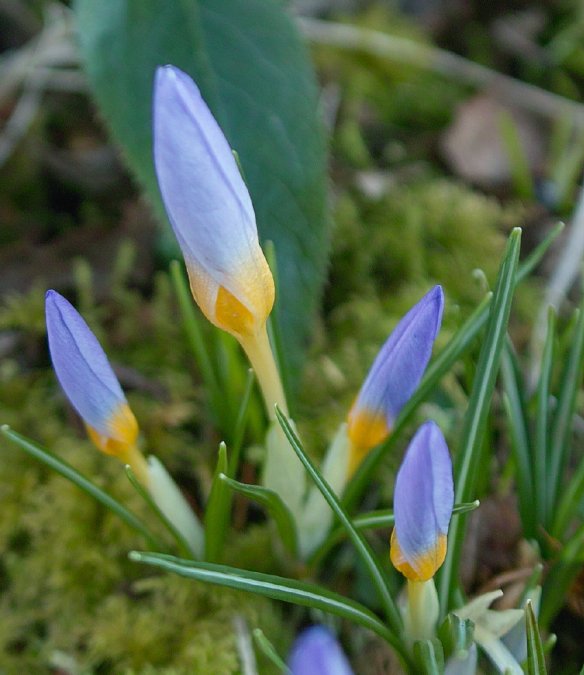 But as the days move on, and these colourful candles sat in the garden in the wind, sleet, hail and snow, I began to wonder how they actually manage to open and close their tepals/petals. And discovered a whole range of sophisticated design features. Firstly, and perhaps most obviously, though I had never thought about it before, the flower is continually growing. This is probably the limiting factor for how long an individual crocus flower will hang around. This year, with C. ‘Firefly’, individual candles have lasted nearly 3 weeks. Pretty impressive considering the weather that’s been thrown at them. And as mentioned already, many of these have never opened at all. 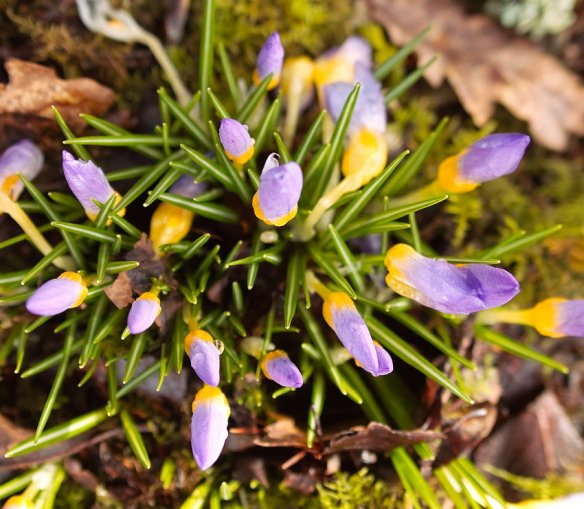 As they become taller and larger, it seems to me that their ability to stay vertical becomes more compromised, and eventually they will buckle at some point of the flower’s ‘stem’, or perianth tube to be more accurate. Even in this collapsed state, the faded fireflies have a certain charm in their entropic state, lying amongst new leaves and the next generation of glowing candles. 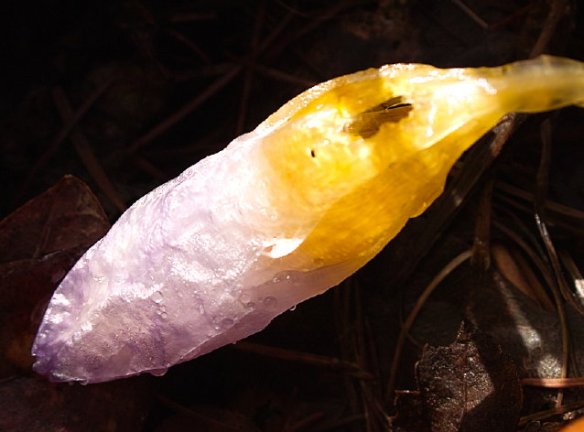 All that effort by the corm, for no reward (save the delight of anyone fortunate to view them). The first C. tommasinianus flowers, and C. chrysanthus ‘Snow Bunting’ seem to shoot faster and so have shorter survival times unopened, before keeling over.

But what all these flowers are really waiting for is their environmental trigger.

Which for snow crocuses (I’ll include C. vernus, chrysanthus, sieberi and tommasinianus in this loose grouping) is a temperature cue. Other flowers can use light levels, or humidity to trigger opening, or closing. Crocus flowers are sensitive to tiny changes, perhaps as small as 0.25 degrees C, but the magic figure for most of their flowers to open fully is about 10 to 12 degrees C. Below this, and they stay closed, and above this they will open. This is another reason to try to site such early bloomers where they will catch any available sun, between about 10 am and and 2 pm. Sited where the Galanthus ‘Atkinsii’ are, below, in a more shaded and level part of the garden, and they would really struggle. This image shows the recent scene around midday after sunshine all morning, but none of this warming potential reaching this particular spot. I’ve realised that for all G. atkinsii’s undoubted merits it actually flops more, and takes longer to recover from a hard frost than many other snowdrops.

Perhaps this is due to a relative lack of antifreeze?

A South facing slope for the early crocuses is even better. And better still some low ground hugging cover like moss (or further down the page), mossy saxifrage to trap air, which the crocus can easily force their way through – look at the temperature change from morning (above), to 5 pm, that are then achievable, compared to the surrounding levels hovering close to zero (with a brisk North Easterly wind), once the sun shines. 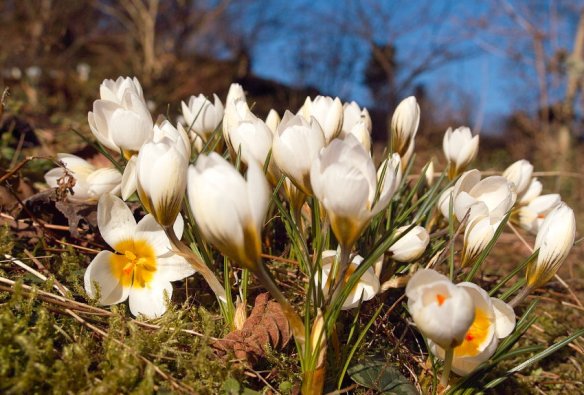 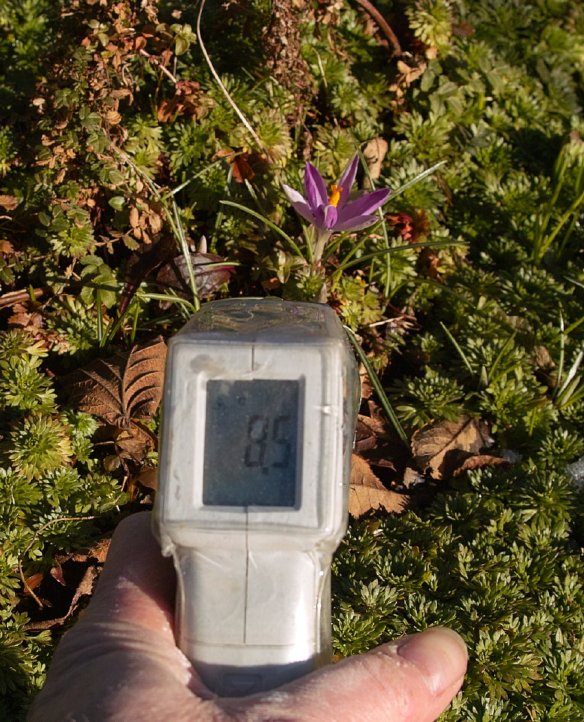 Part of the ability to achieve this, is the result of special ‘pappilated’ cells, with finger like projections, which point different ways on the external and internal petal surfaces. Click here for more, with some wonderful electron micrographs showing what these papillae look like (by Elżbieta Weryszko-Chmielewska, Mirosława Chwil). Different petal colours also contribute to different abilities to absorb the sun’s warming radiations – yellow seems to be least effective, which is why many snow crocuses are white or blue/lavender. 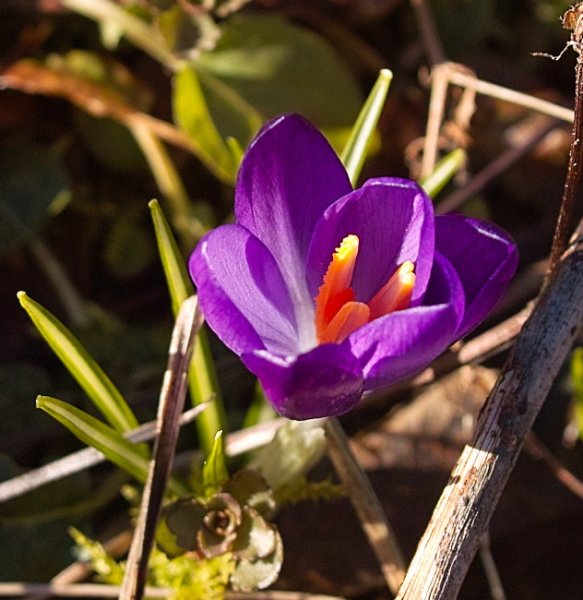 But the cleverest bit of the design, to my mind, is that the cells on the outer and inner petal surfaces grow at different rates at different temperatures, as well as differences between optimum growth temperature ranges at the top (10 to 17 degrees C) and base of the tepals (3 to 7 degrees C).  So, as the internal flower temperature rises, the internal cells grow and swell faster than those outside. And it’s this differential growth which cause the flower to open. Often quite quickly. The rose form of C. tommasinianus, below, reached this stage in barely an hour on February 4th, which was the first day any of our crocuses managed to open this year.

As temperatures fall, this process works the other way, and the flower will close. Click here for more on what are known as these thermonastic movements, and other  fascinating aspects of the lives of many surprisingly sensitive plants. The yellow at the base of many Crocus flower throats may contribute to this selective rate of growth and opening, though in the case of our fireflies, it’s been selected by an eagle-eyed Dutch breeder. 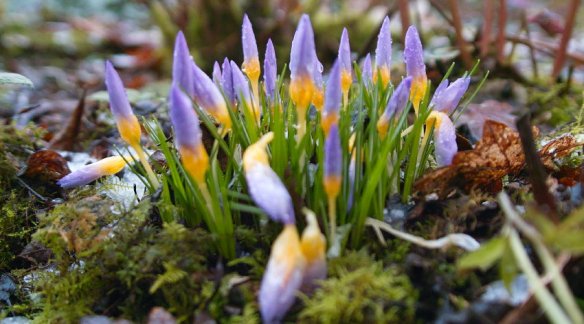 Once opened, the flower will produce and release both pollen and pollinator attracting nectar. And indeed, warm internal temperatures are necessary to optimise pollen grain germination, and subsequent growth of a pollen tube to fertilise the potential seed in the ovary. So, there’s no point trying artificial pollination on an unopened flower on a cold day. And there’s now more evidence that the few early season pollinating insects around, will actively seek out flowers which are warmer internally, since it’s the equivalent of popping in for a coffee and cake, on a cold morning. Click here for more in this paper by Rands and Whitney.

However, no pollinators around today, in our freezing, though sunny, garden.

In a final interesting thread, have a look at the site of an architect, Eleni Katrini, who has explored such ‘Bio-Logic’ techniques to come up with intriguing design features for contemporary new buildings. Including an installation on the fabulous Acropolis museum in Athens. Click here. I’m not sure whether her designs have any role other than an aesthetic one, but they show yet again how designers are tapping in to the wealth of fantastic designs which nature has deployed for millions of years, whilst quietly getting on with just living.

So open or closed, we plan more fireflies in the garden next year. Even unopened, a display of such beauty in the depths of winter for a good 6 weeks per clump has to be highly valued. Our own mid winter ‘Candles in the Wind’.  Click below, for a link to Elton John’s memorable song.

And it seems to me you lived your life,

Never knowing who to cling to,

When the rain (or sleet, or hail, or snow) set in.

Finally, for any readers unfamiliar with the spiral conundrum, I post this year’s recent offerings. 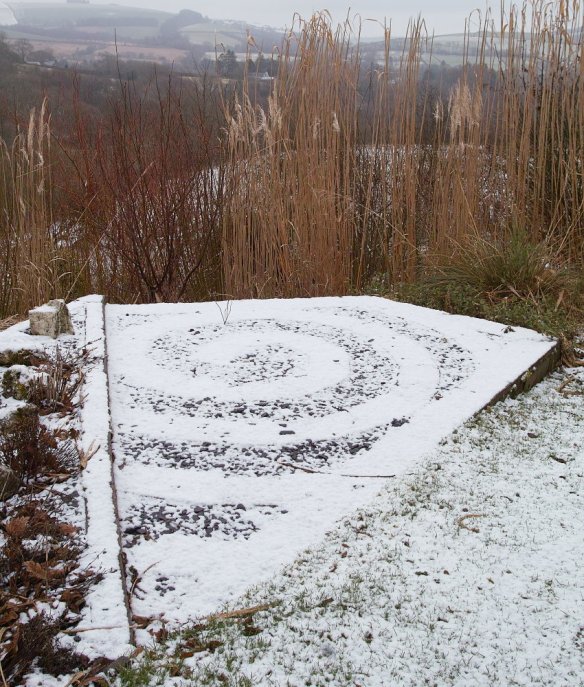 Photographed about 10 days apart, they clearly demonstrate the 2 contrasting melt rates of fallen snow on the chipped slates, and quarry tiles. I think that these clinch the excellent hypothesis explained by Kevin on our ‘background to the blog’ page beneath our home header, click here. 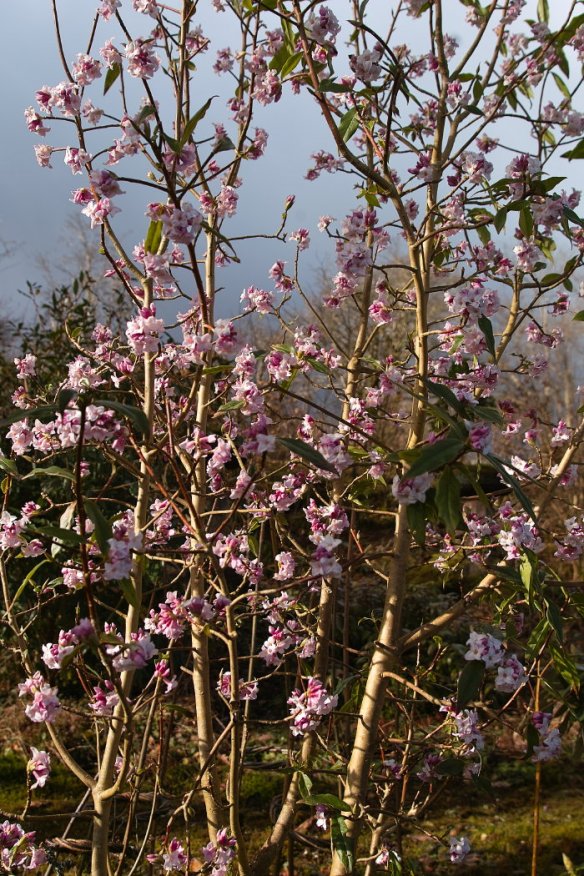 13 thoughts on “Candles in the Wind – The delights of Snow Crocuses; and Spiral Conundrum Reprise.”