It’s now over 7 weeks since I set up ‘The Reactor’, an external compost bed designed to heat the ‘inner zone’ in our 14 X 8 foot cedar framed greenhouse. Thanks again to Fiona’s patience and wizardry with Excel, I’m posting below 2 more graphs by way of an update on its performance. Anyone joining the blog here can look back at several previous posts for information on its design concept and construction. (Addendum: There are a lot of posts now about how this idea has developed and its implementation. If you want to find the other posts quickly, then click here).

Temperatures are in Degrees C… 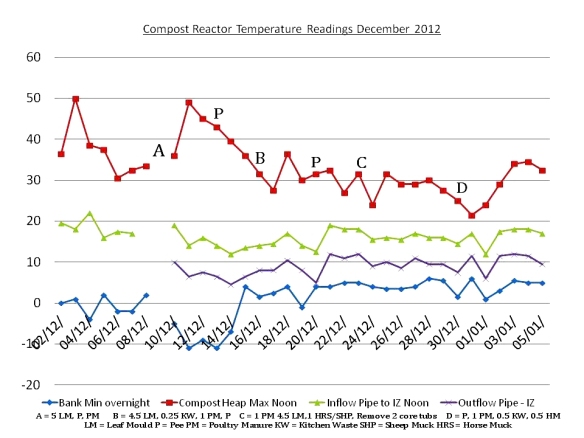 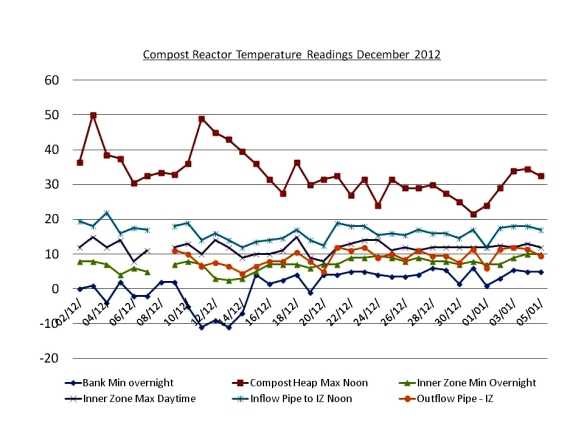 The inner zone max./min. readings in the lower graph are omitted from the top graph for clarity. The inner zone max./min. temperature readings are taken at the opposite end of the inner zone to the compost heap, and its associated warm air inflow. So the lower temperatures recorded in this different location reflect the inevitable subtle temperature variations within any finite elongated space like this. The additions at point D were, for time and illness reasons a simple top up, with no changing of the contents of the inner core tubs of material).

Given the usual caveats about missing data – since we’re not always around; and lack of statistical significance; a few more observations are merited. (I do have even more temperature readings, but it’s just too cluttered to add them to the above graphs).

My suspicion is that a different pipe material, or its location within the heap, or stronger fan could indeed extract more usable heat without detracting from the composting process, and result in a consistently different graph, with even more of a beneficial temperature gain within the inner zone. 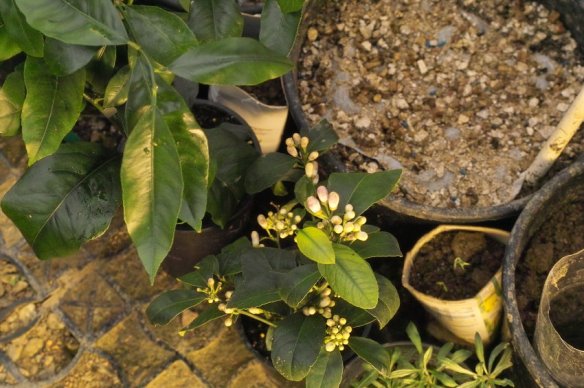 One unintended consequence of having set up ‘The Reactor’ with its thirst for nitrogenous material, is that there now appears to be a supply shortage of liquid supplements. Apart from its obvious value as a nitrogen source, for several months before the greenhouse compost bed was made, I’ve been using it discretely (in both meanings of the word) as a rabbit, rodent and fox deterrent. And sorry, ladies, but it apparently needs to be male urine to be effective.

WHAT! I hear you cry.

In mitigation, and indeed support, of what had been a limited trial of dribbling from the much valued dedicated and inherited galvanised pee containing watering can around the property and poultry’s perimeter fencing (that’s a nice bit of onomatopoeia), I offer the following fascinating information:

(The metal ‘ash can’ which we also inherited with the house turned out to have been a pee pot for the household. We use it for wood/ash, and there’s an interesting recorded use of pee and wood ash being used historically as a cleansing house soap. This has yet to be personally verified).

Firstly, the excellent site of PMart – “America’s first discount urine store”, which sells a huge range of animals’ scents and urine to knowledgeable folk in North America to deter, or attract (if you’re a hunter), your particular friend or foe beast.

Secondly, the consequences of letting up on its use around the property, once the greenhouse compost bed took priority. Where rabbits are concerned, its regular application does seem to limit damage, and any gap in application or relentless rain sees the return of both scrapes and pellets.

With foxes, like all security measures, you only discover that they’re inadequate after the event. But there’s certainly lots of evidence of fox activity in the field above the poultry, with tracks heading towards the enclosure but as yet no attempts to breach the pee marked fence. There’s a little anecdotal evidence on line from other gardeners using it in this way. Click here. 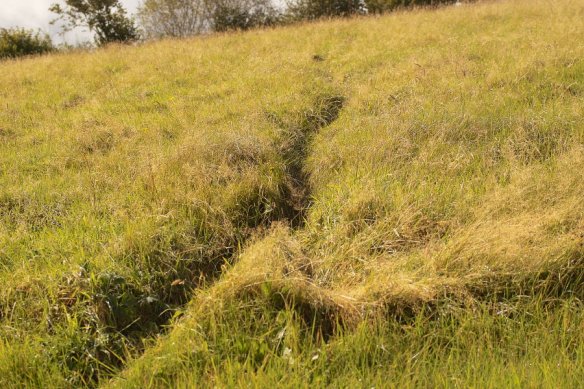 Perhaps the potential value of human urine use is overdue for a wider renaissance. Click here, here and here for much more on how it’s been utilised as a commodity over centuries. I particularly liked the stories surrounding its use in gunpowder manufacture. The American war of independence nearly failed for a shortage of gunpowder. The French came to the rescue of the Americans with ample supplies having previously ramped up their own poor manufacturing systems.

Finally, and most recently, Sweden has appreciated urine’s merits to the extent that municipally organized urine collection from modified WCs has been trialled in a number of locations over the previous 15 years. The problem to date has been providing simple and cost effective links between this municipal collection, and the potential end user – usually farmers.

So maybe using human pee in upland Wales really isn’t so radical, or wacky after all? Feel free to respond.

A perceived issue with its use around a property is that of odour. Fortunately I’d told a friend about both our amusing uses for it and the watering can, before she dropped her horse off for a few days of grazing in one of our meadows. She’s brought along her own water buckets, but finding us not at home when she’d arrived, and the outside taps drained down for the winter, looked around for  a convenient water source. She was about to resort to the filled metal can behind the house when she paused.

Once on the ground in small amounts any smell from the initially sterile fluid quickly dissipates. As well as any smell just dissipating, the rain soon washes it away. And what a year for rain. The totals have now been summed and our figure of 2081 mm, or over 83 inches for the year is certainly impressive. More than enough to drown me in one go, if I stood still for too long.

For the UK as a whole, The Met Office has it down as the second wettest year ever since records began in the 1700’s. But the UK average rainfall figure in this wettest year is a mere 1330 mm by comparison. For all their comparative statistics click here.

Not surprisingly the year’s PV output is down. But not by as much as I’d have thought. It’s difficult to do an accurate comparison since over the last year a few trees which caused temporary shading on the panels have come down, and so the actual year’s results are almost identical.

This is quite pleasing since this level is greater than than forecast at installation, in spite of 2 shocking summers. But what of the year ahead, after the gloom and wet of 2012? Interestingly, today there’s been much radio talk that the Met Office has confirmed that average temperatures have barely changed in the last 2 decades. But I can’t easily find a direct link on their website for this press release, which seems to have been made on Christmas Eve, when I guess most media outlets were well and truly wound down. A good day for burying bad, or unexpected, news? ( Addendum: Click here to read about how the news was released – and why I couldn’t find a mention of it).

With so little brightness of late outside, any photos have been challenging and they’ve all required a high ISO setting, so of poor quality, I’m afraid. But I can record the first flowers of Scilla tubergeniana, or S. mischtschenkoana, which reliably seems to rival some snowdrop cultivars in its earliness. A word of warning though, which the bulb catalogues don’t seem to mention. Our experience of it makes us think it’s a real delicacy for any early season slugs, so it does need monitoring closely and probably some protection, to avoid serious damage. Oh, and a chest soaked, prone photographer, to get an image like this, since the emerging flowers are held very close to the ground, though they rise with time to 3 to 4 inches, which is an unusual and pleasing habit.

Hamamelis “Vesna” is now in full bloom, and like most of our Hamamelis has needed a good 4 years to really settle in. 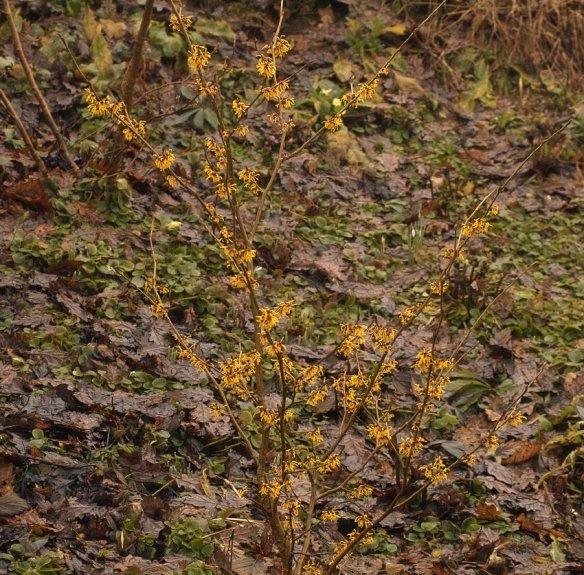 The first 5 cultivars in our growing snowdrop parade are now lightening the scene. Galanthus “Three Ships”, “Mrs.Macnamara”, “Bess”, G. rizehensis and one of our favourite good doers, G. “Atkinsii” (below), is also just emerging. Although it’s sterile, it still bulks up quickly. 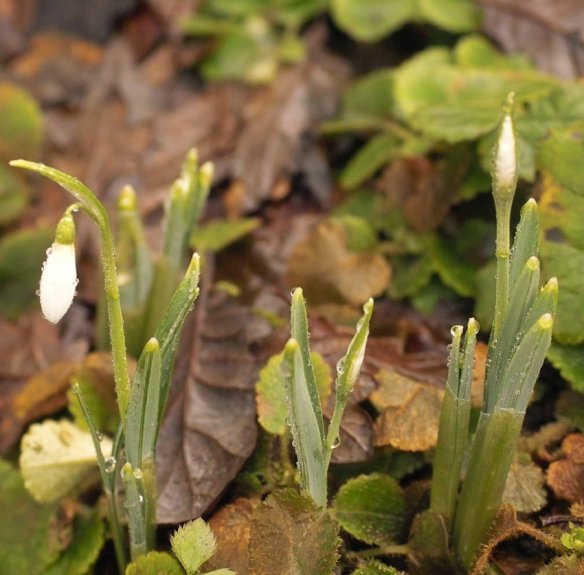 Not enough flowers yet to be really exciting, but a strong hint of the delights to come in February. Meanwhile, in contrast, the Cyclamen coum are on fine form. 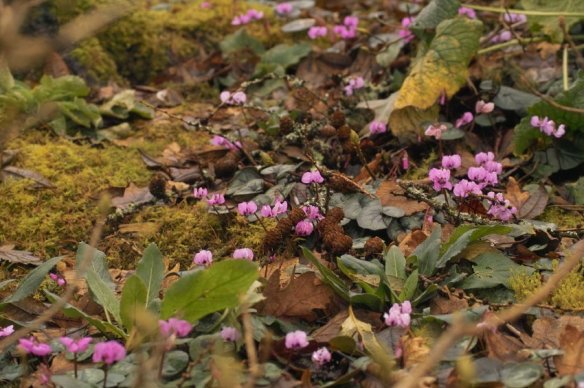 And lots of seedlings for spreading around (these are of white C. hederifolium).

2 thoughts on “The Heat Goes On (Autumn Leaf Mould Energy Potential and Heating a Greenhouse with a Compost Bed – Part 5); Unintended Consequences; Looking Back, and Forward.”