The day began well with a pristine Green silver-lines moth, Pseudoips prasinana, resting up on the barn door. I’ve only ever seen this moth 3 or 4 times before, so when we had a phone call a couple of hours later from a journalist wanting to visit the garden (in 2 hours’ time), I thought I’d shield it from the midday sun in the hope that it was still there when she arrived, and so it was.

This followed on from me finding and photographing another Trichiosoma sorbi, as I was doing a midday garden walk with camera in hand. Big deal you might say. I checked up on-line and as far as I can see, my images of this rather grand furry insect (Trichiosoma indeed translates as “hairy body”) which I posted last year on my blog are still the only images of an actual live insect. I also see that I’d photographed it on exactly the same day last year, June 1st. I’d already been reading about species extinctions (did you know that about 98% of all species that have ever lived are now extinct? I didn’t). In particular that Dragon and Damselflies (of the order Odonata) are some of the oldest insects around, having survived the great extinction of the Permian/Triassic period about 250 million years ago, when around 86% of all then living species died out. Click here for more information.

3 more images for the internet of Trichiosoma sorbi, the Club-horned Sawfly which uses Rowan (and it looks like Amelanchier canadensis as well judging by what appears to be an ovipositing posture above), as a larval food plant. 1/06/12

So I guess no-one would really notice if my Club-horned sawfly disappeared from the scene, since presumably very few people have ever seen one in the first place. But the same day, I also spotted this beautiful delicate lacewing in an identical part of the garden. I don’t know which species it is, there being 14 species of green lacewing and 29 brown species – apparently (click here for a bit more detail).

I digress though. The day the journalist came was also the day of the Queen’s diamond jubilee celebration concert, and beacon lighting in Britain and indeed throughout the world. At the last moment we discovered that a beacon was being lit on Mynydd Llanllwni (mountain), a short distance above us. Finding no further details, we set off at about 9.15pm, to find that the beacon was already lit, and in due course a few fireworks were let off. But parking a mile or so away from the beacon to get some perspective shots in the midge biting dusk, we were delighted to hear to the East our last burst of cuckoo song for this year, drifting across the largely flat moorland mountain top.

And to the North West, views of red tinged skies over the mountains of mid and North Wales, across the sea of Cardigan bay, and over 50 miles away. 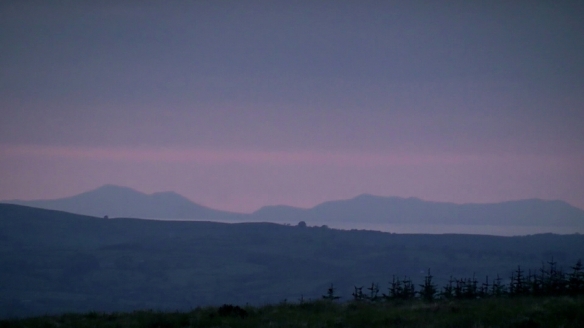 Some readers of the blog will know that the uncluttered open mountain top pictured in some of these scenes is under threat from 470 foot high wind turbines. And who is the landowner looking to cash in on the subsidy fuelled bonanza of industrial wind? Well in this case it’s the Crown Estate, who are looking to generate considerable income from at least 15 of these monsters. Interestingly HRH Prince of Wales, who does a huge amount of good works in the UK, is patron of the Cambrian Mountain Initiative which, quoting from the CMI website, states that:

“The Cambrian Mountains (which includes Llanllwni Mountain, sic) is a distinctive upland area of vast, unspoilt natural beauty that supports valued habitats and species. The region’s ways of farming date back to the Middle Ages and sound management of the Cambrian Mountains and their natural ecosystems have an important role to play in the face of climate change. For example, traditional farming methods can help reduce flooding as well as storing and maintaining the purity of the public water supply in more extreme weather conditions.”

It seems strange that the Crown Estate trustees should allow such an industrial scale planning application to progress given the CMI’s mission, but apparently the Crown Estate Trustees are independent and appointed by the Queen, and the Royal Family state that they have no influence over policy decisions made by them.

Still, as you can see the Llanllwni beacon was lit, in spite of a majority of local opinion opposing the windfarm, a few rockets were set off and then the mountain settled down to another, for now, peaceful unspoilt night.

As we returned down mountain road, we could just make out in the distance the flicker of at least 2 beacons lit to the South East on the peaks of the Brecon Beacons. So the nation was united in celebrating a supreme example of loyal committed service over 60 years by the Queen on her Diamond Jubilee. Will the Beacons be lit again in our lifetime? I guess not.

Last blog, I mentioned the winding path cut through our high meadow, which has now been enjoyed for the first time by garden visitors. Meantime Fiona and I pound it daily as a form of circuit training. By chance rather than design, the uphill snaking route, at about 120 yards length is some 50% shorter than the downhill meander. The consequence is that at a brisk walk, one is breathing deeply by the time the top is reached, but continuing on, by the time you return to the start point, another circuit seems a doddle since your pulse has returned to normal, and so on. I’m including a few Camcorder screen captures from just a few of the trips round so far. In particular I was fascinated by the magnified shadow of the Sycamore tree falling down the slope towards the house on a sunlit early evening, which reminded me of the cover image of ‘Taller When Prone’, the most recent anthology of beautifully crafted and observed poems from the Australian continent by Les Murray.

You can get a flavour of Les Murray’s work by watching the video clip below for an interview of him talking about his poetry at the Sydney Writer’s Festival. I was persuaded to buy this book after hearing Les interviewed on the radio and being struck by his ability to communicate so beautifully through words his keen observations of the very different environment he experiences down under, to that which we enjoy here.

The other morning, waking at 5.30 am and leaving the house with air rifle in hand to look for rabbits, I quickly returned to swap the rifle for my camera as a stunning sunrise over rising mist filled valleys greeted me. 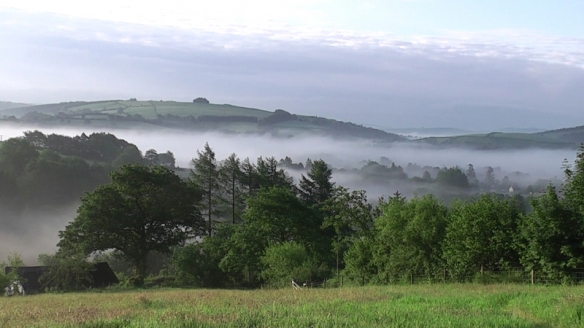 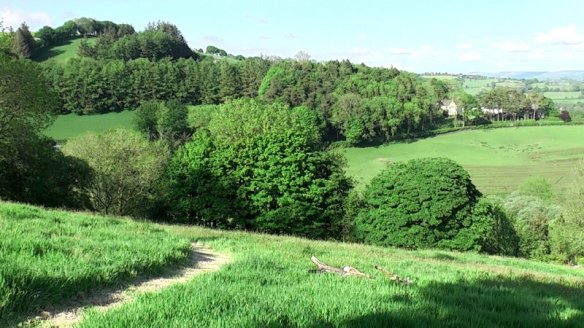 Following on from ‘A Bee in My Ear’ last post, this week I submit a Bat on My Hat. Little to add to the images, save to say that the bat appeared on the kitchen floor one morning, and I suspect that it may have suffered in the days of strong winds and rain which have lashed the UK recently and brought significant disruptive flooding in mid Wales barely 40 miles North of us.

After the photo shoot, it was relocated in our woodstore, but I fear it did not survive. Bat numbers have of course declined significantly in the UK over the last century, but in our part of rural Carmarthenshire, they seem to flourish, at least in part because of the very diverse and prolific insect population. The warm fortnight at the end of May saw huge numbers of insects of many types throughout the garden. June has seen them battle with often cold, windy and wet weather.

There’s been a huge hatch of these sluggish but distinctive large red-legged flies this last fortnight.

Our 2 wettest days of the last 2 years preluded a visit from the Llandeilo Gardening Club. Fortunately the weather abated, for a day of lovely light, clouds, interesting conversation and, NO RAIN.

Seeing the jet stream blamed on-line for this latest bout of unseasonal weather made me keen to find out a bit more about what is causing the jet stream to shift further South over the UK than is normal at this time of the year. Interestingly I couldn’t find a definitive answer. But the search revealed numerous occasions over the last 6 years when the shift in position of the jet stream was cited as the cause of bad weather from summer washouts to winter freezes. And there I was thinking that the Atlantic Gulf Stream was the major influence on our weather in the UK.  If anyone can enlighten me as to why the jet stream is repeatedly meandering, out-of-order, to the South of the UK, do let me know or I shall be forced to conclude that as in so many areas of life we’re given this benign explanation to prevent the chickens from getting too restless.

Many of the birds in the garden have reared one brood successfully already this spring, and so just now seem to have a bit of respite from the daily grind of finding sufficient food for the chicks to be able to indulge in renewed courtships displays (pied wagtails), more relaxed serenading all day (blackbirds), or perhaps a bit of both (swallows). The sequence of screen captures below of a pair of swallows on the telephone wire shows the widely recognized difficulty of grabbing your partner’s attention sometimes, no matter how hard you try. Fiona suggested playing them as a slideshow. Perhaps if you copy them you might manage this? Alternatively try scrolling down fairly slowly, to get the birds moving, and appreciate the lack of response to all that EFFORT. 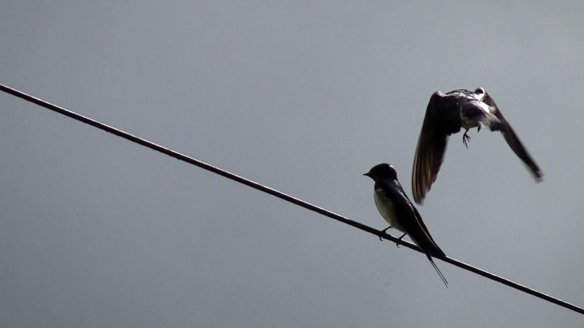 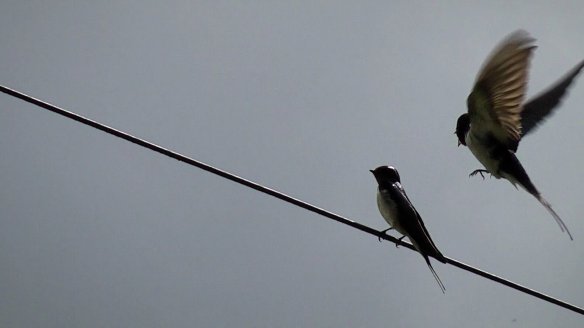 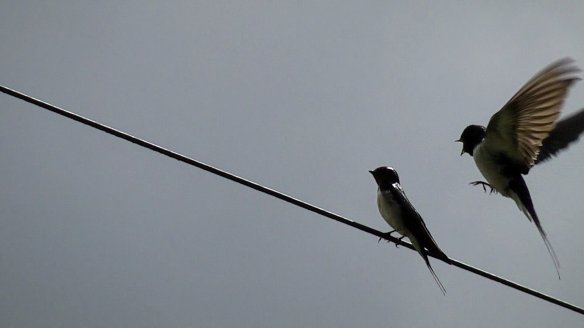 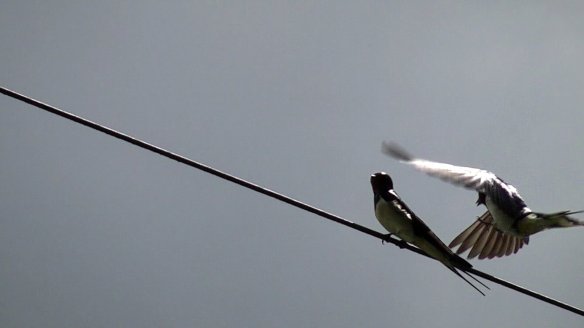 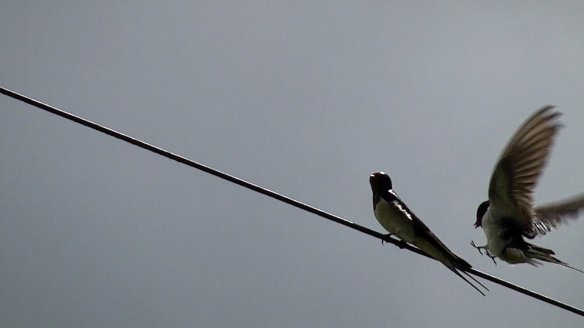 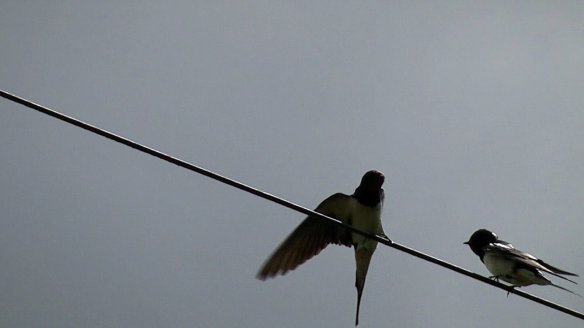 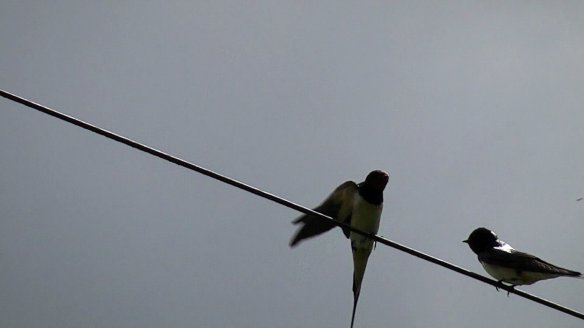 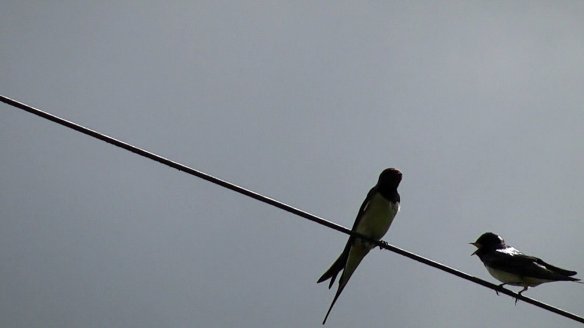 Meanwhile down below, the flowers bloom and weeds grow: 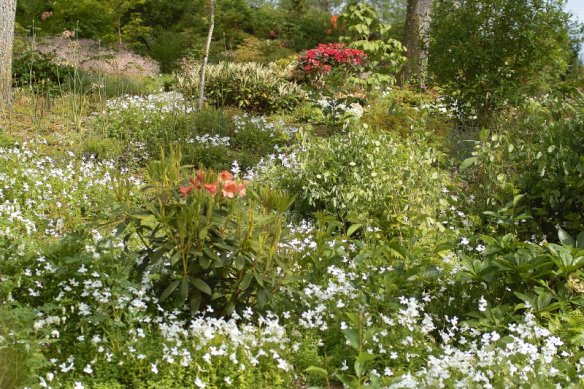