It started with time.

And a watch ad.

And another full-page colour supplement watch ad, four pages further in, and both were featuring sponsored aeronautical display teams behind the shiny complex watch face. And both, no doubt, were hugely expensive consumer items (Breitling and Citizen Eco-Drive). The thought chain, lying in bed on another grey Sunday morning, was how strange that something we can’t really alter (the passage of time) should motivate such expense and accuracy to monitor it, in today’s advanced world. And become elevated to coveted status symbol. I haven’t owned a watch since my early days of 10 minute consultations running over 3 hour surgeries. I quickly realised that whilst I could keep pretty much to time, ‘time-gazing’ really piled on the pressure.

But this Sunday, my thoughts moved to how a simple and monosyllabic word like time has been revered and exploited commercially in this way. And then, thinking a bit more divergently, how many other really important words are indeed monosyllabic. At least in the English language:

And I guess that there is a pretty small finite number of monosyllabic word options available (roughly 6,600 in the English language apparently). I mentioned my thoughts to Fiona after I’d got up and made the first cup of tea for the day.

Whether this association between the vital important things in life and monosyllabic profundity holds in non Anglo-Saxon languages I don’t know, but perhaps there is a logical extension to suspicion of multi-syllabic language as shifting away from core thoughts.

Both time and dirt are certainly monosyllabic words familiar to all gardeners. There’s never enough of the first and usually too much of the second. Indeed the reason for the longer than usual pause in blog posts is illustrated by the images below, and follows a familiar theme for my posts. No sooner do I write a few words as above, (“lying in bed on another grey Sunday morning” written 10 days before finishing the rest of the text), than the mercury rises and we have 10 days of unbroken hot sunshine, and absolutely no time to spare from dawn to dusk. 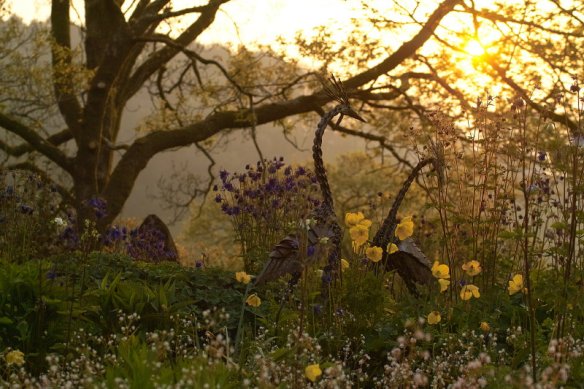 (an eerie, still muggy morning at 6.00am heralds the start of the warm spell).

(wall to wall sunshine, quantified, for a week.)

Indeed, I’ve forced myself inside today after the threatened shower hasn’t materialised. All the dry weather has allowed lots of productive clearing of items from the expanding ‘to do’ list. But a job I hadn’t planned at all developed from the cracking and peeling of the moss and lichen covered grout between our cobbled path at the front of the house after all this relentless sunshine and heat. I’ve maintained this path for over 3 years now with no chemicals and a mix of hand weeding and using my home-made electric weed scorcher, which has steadily reduced weed numbers. An unintended side effect of stopping using Pathclear chemicals has been to allow little solitary mining bees to take up residence: 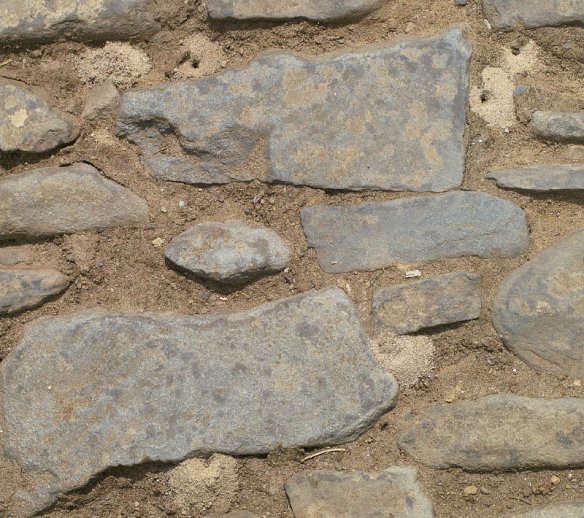 (the little pyramids of fresh sand from the mining bees.)

(this is one of the species that lives in these mines. Interestingly, it prefers our native yellow Welsh poppies, Meconopsis cambrica, as a pollen source.)

But no matter how often the moss and lichen gets heated with my weed scorcher to singeing, or even burning point, it always seems to recover its fleshy green appearance in about 3 weeks. Raking it out with a mortar hammer was pretty easy and showed the extraordinary ability of the moss and lichen crust to retain significant moisture less than 1 cm down from the surface in spite of the extremely dry conditions.

(The offending, tough as old boots, lichen. Can you think of any other living organism of this size that could survive drought, and burning every 2 weeks and keep bouncing back? And lichen is anyway a symbiotic merging of fungi and algae. How did that ever happen? But it certainly has carved a niche as a biological survivor.)

Perhaps there’s something to be learned about reducing evaporation from the lichen’s micro-structure? But the success of the moss and lichen in this location has, I guess, also relied upon the gradual accumulation of years of organic matter on top of the nutrient poor sand and cement initially used to bed the cobbles in. Mainly spruce needles in this location, and this unavoidable natural burying process will eventually give the next century’s archaeologists scope for further research, no doubt. After my little, though tedious, maintenance session, keeping this section of path tidy should in future become a little simpler to manage for a while.

It’s always great to get new ideas and a psychological boost from seeing other people’s gardens and the last 10 days has seen us returning to the National Botanic Garden of Wales (NBGW) for member’s day, when we noticed for the first time in countless visits, a stunning small Malus tree growing beyond the Great Glasshouse. It presumably doesn’t stand out during other seasons, but just then was a mass of bee attracting, tiny white flowers. 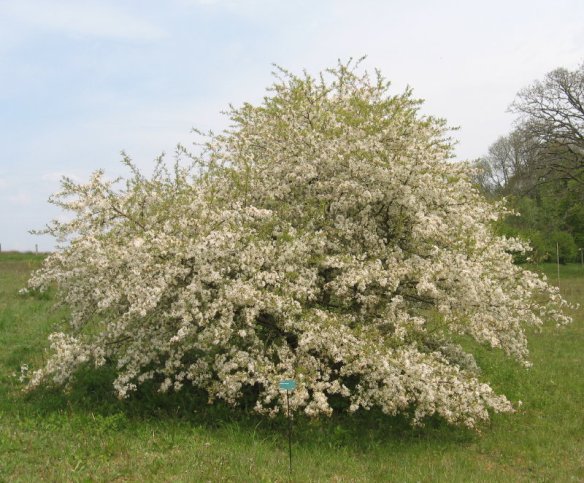 (Malus toringo, a Japanese crab apple at the NBGW.)

We also succumbed to a couple of Anchusa azurea ‘Loddon Royalist’ plants, a new species to me, with the most stunning blue, borage like flowers, but much earlier into flower than borage. I’m interested to see just how insect friendly this plant is, once established, since in spite of being described as bee friendly, it’s yet to set the Gelli insect world alight. See below:

Then came a trip to Bryan’s Ground and Staunton Park in Herefordshire, organised by the West Wales Country Gardeners’ Club. We loved Bryan’s Ground in particular, with its myriad of tightly worked garden rooms, quirky sculpture, powerful but simple, repeated theme plantings and developing arboretum. Even if, in this late spring, the thousands of massed Iris sibirica in front of the Arts and Crafts tiled house were only just emerging. All of these experiences, together with my thoughts on time, have given me ideas for a couple of new sculptural elements for our garden, though these will have to wait until autumn to execute. 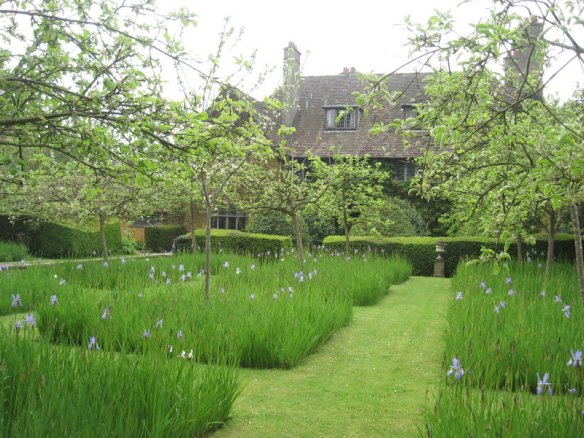 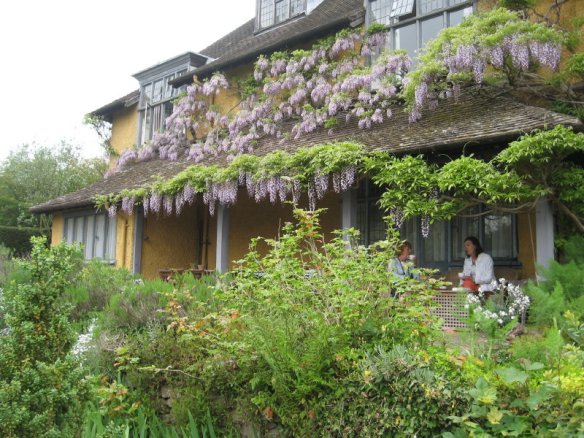 (Thanks to Fiona for the garden photos of NBGW and Bryan’s Ground.)

Returning home Fiona scythed a serpentine path through our developing wildflower high meadow, and with a bit of effort I followed her rough track with our rechargeable lawn mower, so that we and garden visitors can now work out by climbing up the hill and enjoying the developing hay meadow, which over the last 17 years without NPK fertiliser, is gradually reverting to a more varied upland, acidic, diverse sward.

But also, after climbing up, to enjoy the really special views.

So, I carried a couple of simple wooden chairs up, and last night we enjoyed a drink and a view, as the heat hung in the humid still air, before the midges descended.

All this talk and no garden detail. Images will suffice to capture what is perhaps the best time of the year in our garden, and this year has been the best year yet, as plantings, particularly of underplanting groundcover carpets, really begin to fill in, even if the shrubs and trees have a long way to go to reach anything like maturity. 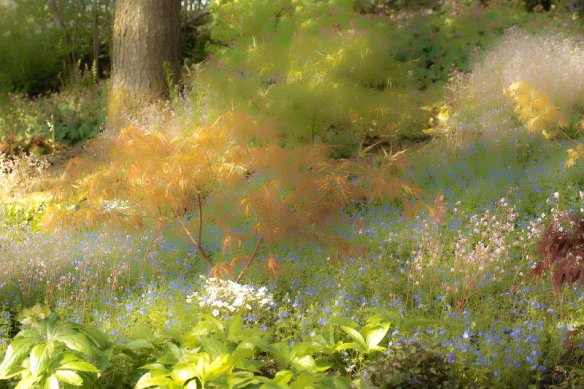 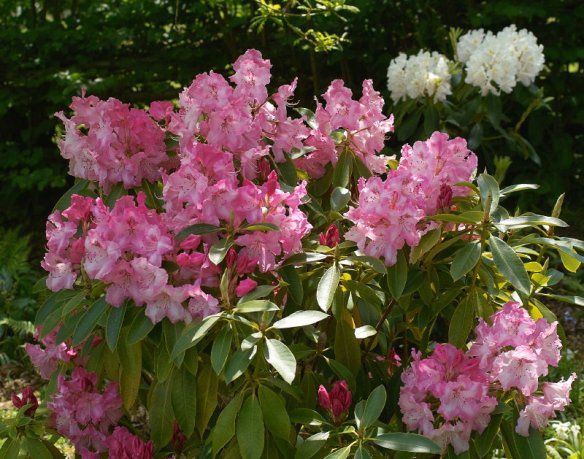 R. ‘Betty Wormald’ – how appropriate that she performs reliably well for us. Medium height.

R. ‘Surrey Heath’, another compact floriferous cultivar. The blue underplanting in many of the above images is native germander speedwell, Veronica chamaedrys, and purple bugle, Ajuga reptans, combined. The white underplanting is London pride saxifrage. 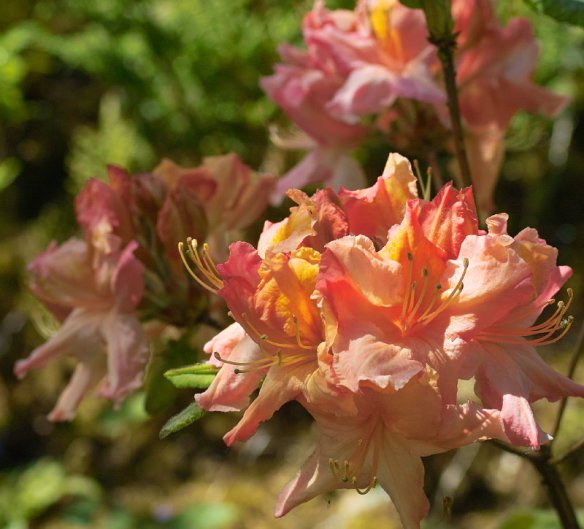 I love this mix of germander speedwell and Geranium sanguineum – not really enjoyed by the insects as many of the above flowers are, but looking a perfect match.

It’s also been our best ever year for visits to the garden by honeybees. We reckon the nearest ‘managed’ hive is about a mile away. There seem to be a variety of colours of visiting bees, the majority being a dark or even black bodied form. Are these native or wild bees? Or a hybrid form with the more yellow bodied European or Italian bees?

I’d already seen lots and photographed them on many flowers in the garden which they’ve never visited before – probably just a reflection of previously low visitor numbers. So there was only mild surprise when I opened the greenhouse up the other morning first thing and heard, and then saw, a honeybee inside. I started watering the tomato plants and then was halted by the sound and feel of said bee landing in my left ear.

Right by the ear canal.

I’m not usually phased by insect encounters, but I had enough time to think about the possibility of it exploring this dark, wax lined hole, and possibly stinging me there.

‘Remember that bees rarely sting unless provoked, so don’t panic’, I told myself.

But after a minute of standing still, with no sign of the bee flying off, and amplified rasping noises in the ear, I reckoned another tack was called for. So I left the greenhouse to stand outside where there was a brisk southerly wind blowing.

That should shift it!

Well, it didn’t, so I moved round to the front of the house into the sun, and close to some flowers, and then with the bee moving away from the ear canal, but still very much exploring the ear, I glanced in the kitchen window to confirm that it was indeed a bee. There it was, and at this point I realised a photo opportunity was presenting itself, so shouted to Fiona, who predictably responded speedily to (she’s well used to such sudden  requests, by now):

The problem was, that as she pressed the camera shutter, a ping alerted her to the fact that the flash card was still in the computer upstairs. Eventually the camera was set up, she homed in and at the very last second, after I guess a good 5 minutes, the bee flew off. So, sadly no nice image of bee in ear to include, so I’ll add a few of bees in flowers instead:.

Honeybee falling from Geranium himalayense flower. Not as popular with the bees as G. phaeum or G. macrorrhizum, but still visited this year. It’s easy to miss a perfect bee shot.

G. phaeum is really popular with honeybees and smaller bumblebees.

A classic example of flower preferences. For the first time this year, after 3 years of looking, I’ve seen insects – honeybees, visiting the blue flowers of Brunnera macrophylla ‘Mayenne Blue’. But they seem to ignore the similarly sized pink flowers of native Geranium lucidum.

I did wonder later, given the very warm weather and the fact that the bee was in our western redwood cedar greenhouse, a timber often used for beehive construction, and that it seemed attracted to my waxy lughole, that perhaps it was a scout bee out on a pre swarm reconnaissance mission, and that shortly it would be back with company…

2 thoughts on “Monosyllabic Profundity, Dirt, External Stimulation and a Bee in My Ear”