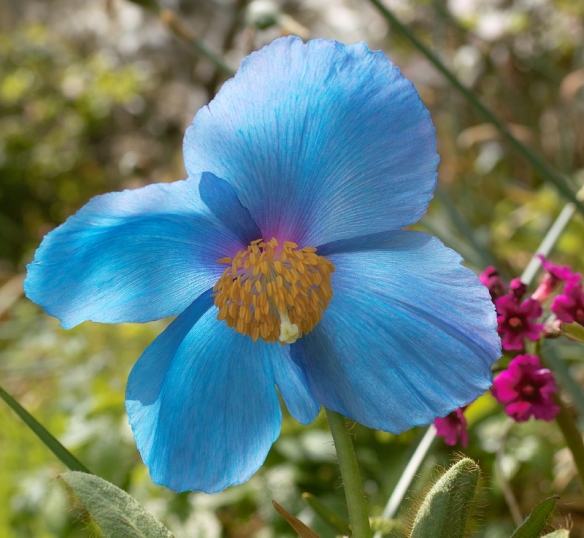 All I gotta do, is take a look at you, (as Phil Collins sings on Groovy Kind of Love). A busy 10 days and more cold wet weather. At this time of the year even rainy days and Sundays don’t get you down (to mix it with The Carpenters), if you grow blue Meconopsis grandis. So a glut of images to demonstrate why they’re such fabulous almost other worldly flowers come rain or shine. 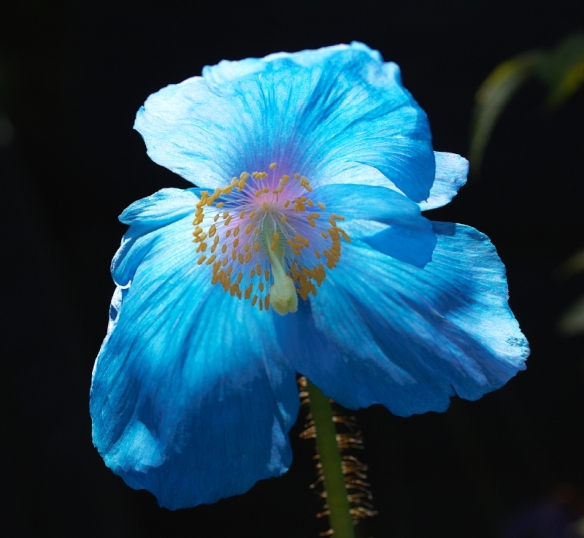 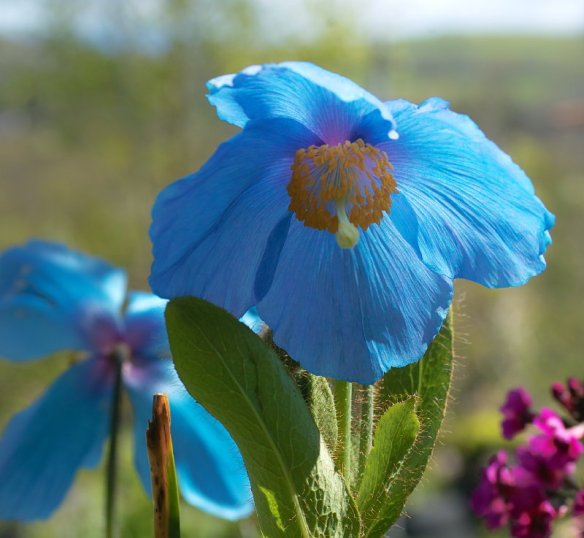 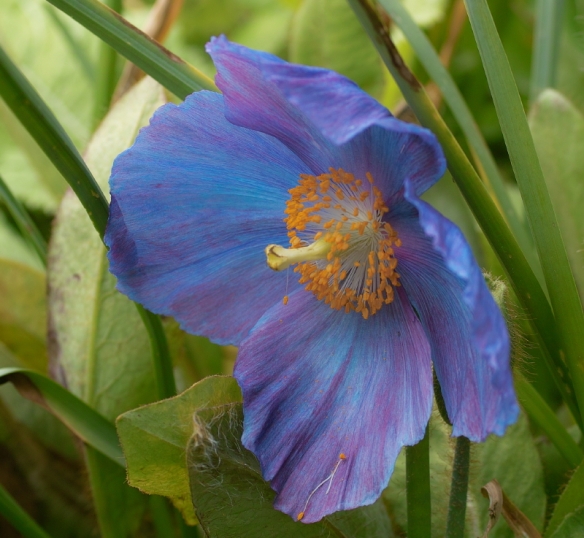 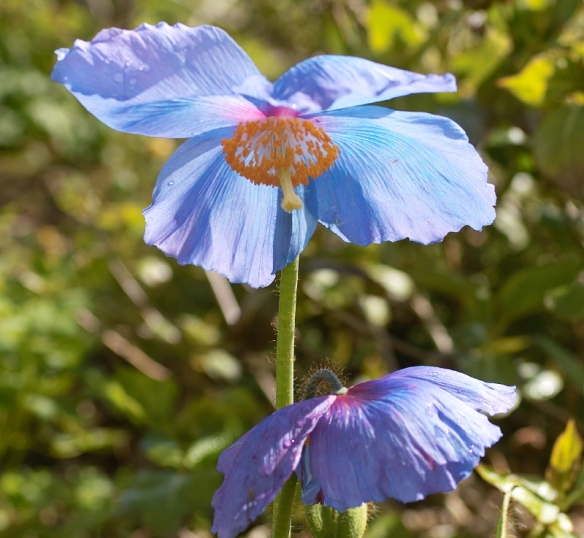 All of the above images were taken in the garden during the last week, and for those interested in the rich ruby flowers shown in many images, we think it’s a form of Primula beesiana (we collected the seed years ago), which seems to complement the Meconopsis colours, and matches its flowering time and preferred growing conditions perfectly. Primula beesiana originates from damp mountain meadows in China, the Meconopsis grandis from the mountains of Tibet, Nepal and Bhutan. Does the fact that they both thrive here give you a clue to our local Welsh climate?

At this time of the year there are a few other clear blue flowers in the spring garden which almost rival the intensity of blue, albeit on a smaller scale.

One of the best late spring bumblebee nectar sources, another member of the Lamiaceae, is the purple-leaved form of Bugle, Ajuga reptans ‘Burgundy Glow’

We’ve reached the start of the season for Aquilegia vulgaris flowers, many of which fall into the dark blue or purple range, and again they’re wonderful nectar flowers for native bumblebees.

This is the best blue, and most floriferous, of several Brunnera macrophylla forms which we grow. We bought it as B. ‘Mayenne Blue’ at a plant fair years ago and it will flower for months on end in part shade, with these clear, forget-me-not blue, tiny flowers. 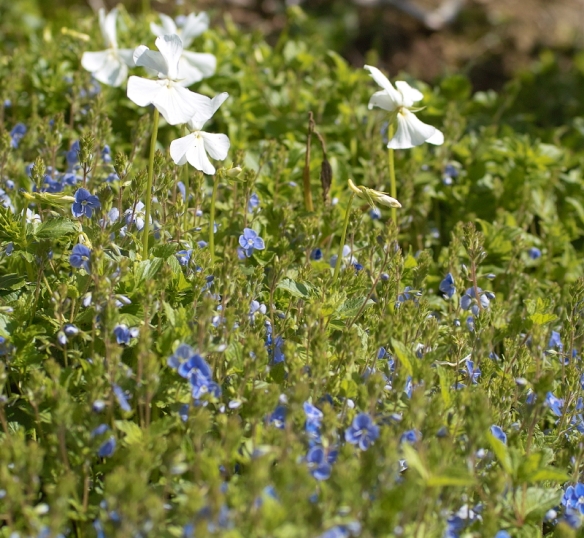 One of the native flowers which we encourage in the garden for its small pretty blue flowers and attractive creeping habit – Germander Speedwell, Veronica chamaedrys, which is shown here with the white Viola cornuta, which also litters our garden, beautifully.

The very pretty and almost unpronounceable Omphalodes cappadocica here in ‘Cherry Ingram’ form, a native of Turkish woodlands, but happy in our Welsh woodland, and if you can keep the slugs controlled it gives a lovely long spring display of clear blue, small flowers.

All of the above images have been snatched in brief sunny dry interludes in what continues to be a desperately poor late cold spring for trying to get vegetables growing. Apparently this is caused once again by a misbehaving jet stream which is adversely affecting our wind and weather patterns. But we’ve had less time to notice such things with a screening of my film (Epiphany In Translation) in Shropshire, an evening garden group visit to the garden after the wettest 24 hours this year, a really enjoyable trip to give my ‘Botany of Desire’ talk last night to the Pembrey and Burry Port gardening club, and before all of this a trip with some of our cards and scarves to the Hergest Croft Plant Fair. This was somewhat disappointing since a cold wet Bank Holiday Monday kept many visitors away. Which was a shame, since Hergest is always such a beautiful and peaceful woodland based garden, even under gloomy skies.

Whilst wandering around the many plant stalls at Hergest Croft my attention was taken by a small stall featuring insectivorous plants – venus fly traps, sundews and pitchers. Of course I’d seen many of these before, but not I think the extraordinary flowers of the Sarracenia purpurea, growing taller than, but alongside the lengthy pitchers. We hadn’t taken a camera so I’m linking by clicking here to a photo from the Wikipedia site of what the flowers looks like, and much more detail besides. The stall holder assured me that they were hardy, but I resisted the temptation to purchase one although I subsequently discovered that they’re native to the Eastern U.S.A., and Eastern Canada. Indeed, they’re the floral emblem of Newfoundland and Labrador. Equally they are listed as only hardy to about minus 5 deg. C, so although our bottom field has the perfect acid bog type environment for them I fear that they would not survive our low winter temperatures. But I was intrigued reading up about the strategy of ‘carnivory’ in plants as a means of obtaining the necessary nitrogen for plant growth in a natural environment where the soil conditions mean that there is virtually no useable nitrogen available at root level. Many plants growing in such poor wet conditions have developed a number of strategies to lure, trap and then digest insects, which are protein and hence nitrogen rich organisms, and so are a perfect growth supplement. Sticky hairs, lobster pot traps, pitchers and the fascinating trigger operated clam shell of the venus fly trap, show the ultimate in intelligent design, or the result of random chaotic process (delete according to your personal world view), common throughout the natural world but particularly dramatic in this specialised avenue of plant evolution.

But what about Rhododendrons? This year I’ve noticed that the new leaf buds of several Rhododendrons which we grow seem to attract insects – mainly a variety of flies, and then spiders. But the buds are clearly covered in a substance so sticky that it works as effectively as the ‘Hug Tight’ glue that the ‘Twits’, in the wonderful book of the same title by Roald Dahl, used to paint on the branches of the trees in their garden so that roosting birds would land and become stuck, and thus end up in the cooking pot. What on earth is the value of trapping all these insects as far as the Rhododendron is concerned? Well I have failed miserably to find any reference to this on-line, but I propose that since many Rhododendron originate from regions with high rainfall and free draining acid soils, then there may be similar nitrogen deficiency issues to those facing the pitchers. And even without specialised digestive enzymes at work, I guess that the decaying insects’ bodies will lose their nitrogen quite quickly into the root zone of the shrub, and so in time be taken up and aid subsequent plant growth. 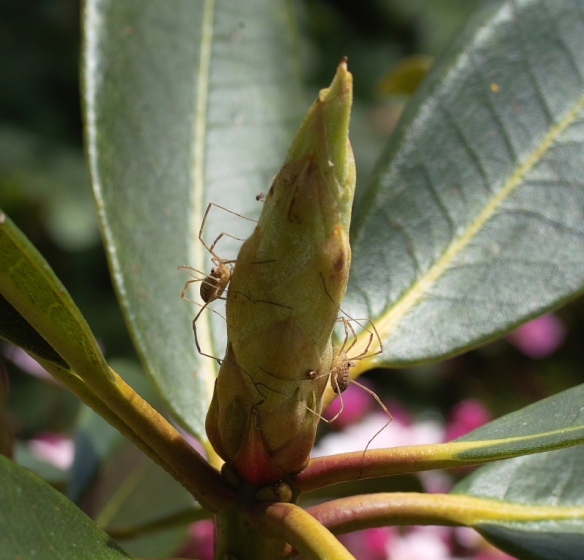 A more overt ‘carnivory’ was apparent in the garden this week. We ditched our microwave oven years ago, and now if we forget to remove something from the freezer in time for supper it gets plonked on our slate wall to speed up thawing, or in this case by Fiona on a pile of logs outside the back door. ‘It’, on this occasion, being Fiona’s diet supper of rump steak. A couple of hours later she was power walking round the bottom field and thought she spotted a carrion crow on the ground with a large chunk of meat in its beak. She didn’t make any connection until she went to retrieve her steak just before supper time, and found the empty and very effectively slashed packaging. 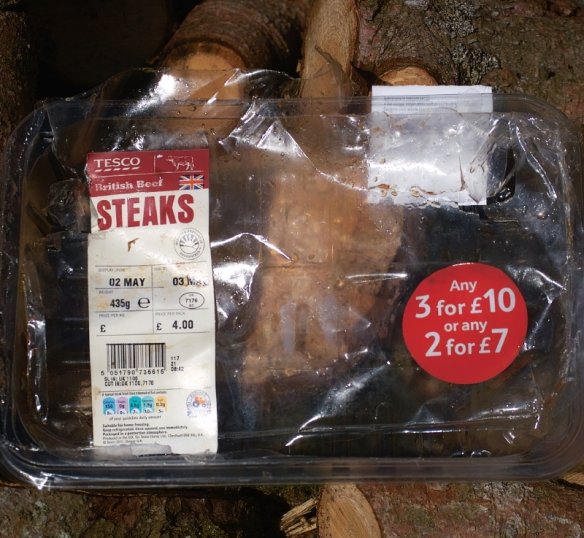 Two days later a young rabbit was carefully skinned and picked or chewed clean at exactly the same spot overnight. Was the fox dung nearby a clue to the culprit this time? Why hadn’t the carcase been removed to a safer eating place?

The following night even these remnants disappeared.

Finally, as it seems with all types of garden plants, there are those that thrive and perhaps 3 times as many that have some novelty value and are foisted onto the unsuspecting obsessively collecting mentality of many gardeners (regretfully we occasionally lapse into this category) by the horticultural trade, understandably keen to generate turnover. In our very limited experience, Rhododendrons are no different in this regard and since they are now at their peak of flower in our garden, I thought I’d show a few of those that flower reliably and well, at least with us. We thought when planning and buying Rhododendron we’d researched the subject pretty well and covered the three most important factors for us of eventual bush size, relative flowering times and flower colour.

We bought many from a specialist nursery, but we hadn’t factored in for how floriferous or regular the flowering would be. Or considered the subtleties of cold tolerance, and degrees of shade preferred, so some have already been moved twice, and still aren’t flowering. Like a lot of shrubs, if a particular Rhododendron doesn’t flower well for that fairly short 2 to 3 week season, then why give it valuable garden space? 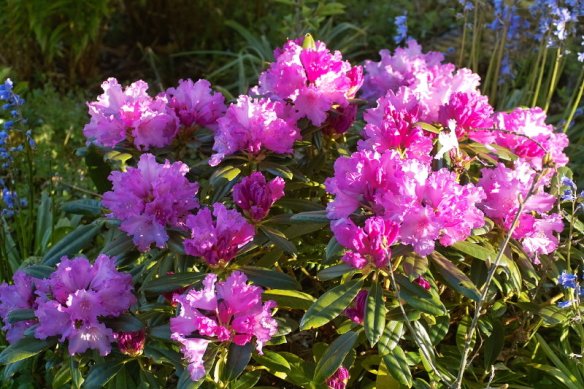 R. Caroline Allbrook. This has flowered consistently well, even in the year after being moved. The flowers complement Bluebells beautifully.

So these are some of our reliable favourites, at least so far, and all of these are in the small shrub category, so shouldn’t get much bigger than 1 metre after 10 years or so. 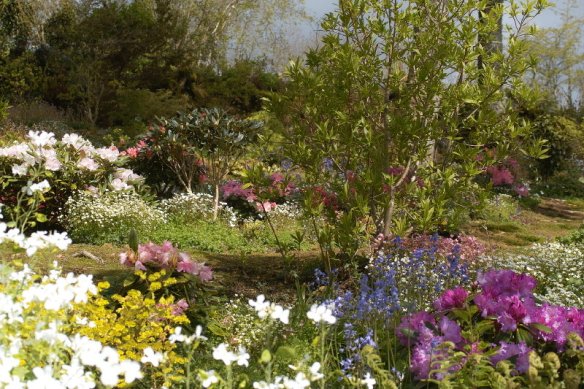