It’s taken 3 or 4 days to find a chance to start writing this post. This might seem strange since the days are now so short, but it’s been tidy up time after the efficient tree surgeon team from Lampeter tree services came to take down 3 enormous Norway spruces. Located just too close for comfort to the house, they were beyond my capabilities with the chainsaw, particularly after my previous lucky escape with a large tree.

Watching Meirion and his two helpers systematically work their way up the trunks to the tree tops lopping off side branches but leaving stubby footholds, then pausing for a cup of tea before taking the trunks down in sections, was a study in efficient well planned work.

Though not before an amusing interlude.

Having asked Meirion during their tea break to leave the trunks with about 8 foot stumps, to possibly allow me to shape them into giant mushroom shapes in due course, the three of them had each climbed back up their trunks to work their way down, lopping off about 3 feet sections at a time. Meirion reached the ground first, took off his helmet and watched his co-workers continue down their trunks. It suddenly became clear, that one of them might have forgotten about leaving a taller than normal stump.
Meirion began to shout in Welsh, presumably telling his mate to stop. The cries got louder and louder, but were understandably not that clear beneath the helmet ear muffs and the sound of the chainsaw working. Eventually, despairing of getting through to his colleague, there was clearly only one option.

Miraculously, at last the message was heard, and I was left with 3 raised stumps to tackle and not two.

By lunchtime, the 80 foot high trees were neatly on the ground, the trunks lying on a cushion of the lopped off branches, and even better thanks to a brisk Southerly wind, virtually no shavings had blown onto the garden. 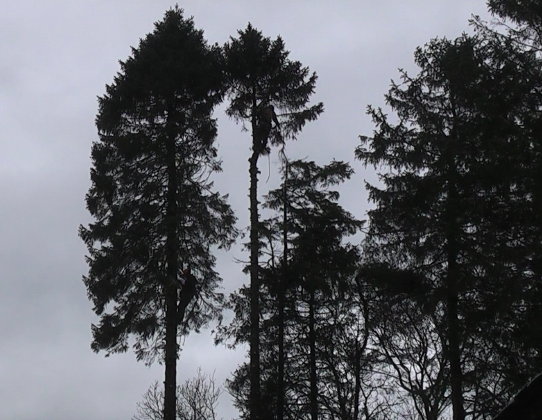 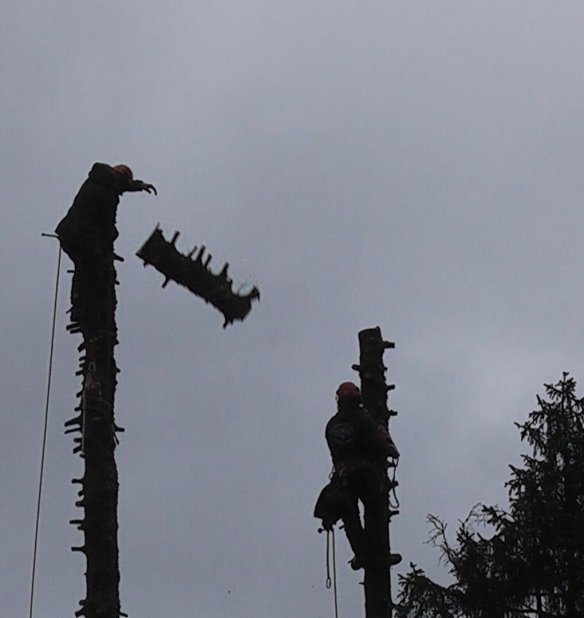 Then working back down with careful placing of the logs!

So collateral damage was nil. But this is where I had to take over, and it’s been the best part of 4 days ringing up trunks, branches, stacking them and then clearing shavings and debris from the trees’ bases. By the end of the last day, the body has been creaking a bit.

The main resource to come out of these significant trees is a huge volume of wood. As anyone with a wood burner will tell you, softwoods like spruce are a bit iffy since they can generate a lot of resinous residues in flue linings, but since we’re fortunate to have a buffer of several years’ worth of already cut firewood, it will be well dried before it reaches the stoves. Interestingly I read just today of possible issues with wood burning stoves and the sooty black carbon emissions from them and its role in climate change. I think a big part of this issue is how efficient the wood burning stove one uses actually is, and how dry the wood is before it’s actually burned. Most of ours now has over 3 years of seasoning before it will reach a stove. The small needle covered branches will be burned when we get a good dry day with a decent wind, and the wood ash from this fire, probably several large tubs worth, will get put back straight away onto the garden since any rain quickly leaches out many of the soluble nutrients. 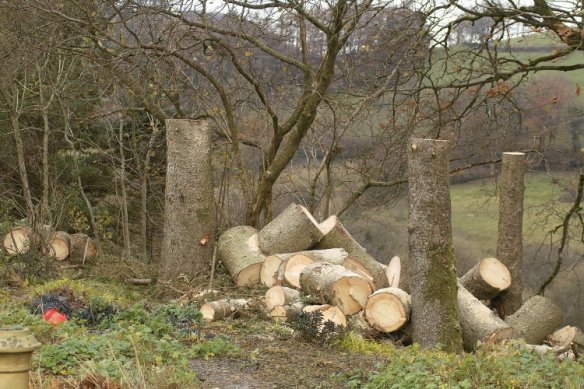 I also now tend to collect up the wood shavings. This is tedious and awkward on a slope but it did yield about 2.5 Dumpy Bags in the end, so well worth the effort. I’ve only started to use these Bags over the last year for leaf mould and similar material, and found that a filled bag of ash tree shavings collected in the spring had by autumn become useable compost/mulch material. Without being die hard committed permaculture disciples, we do like the idea of using what’s to hand to grow our plants in rather than importing lots of material from elsewhere. The secret for the speedy conversion of nitrogen poor fibrous material like chainsaw wood waste is hinted at by the watering can in the picture below. “Recycled tea or fruit juice” in my case. We’re  lucky to have a private garden which allows me to collect this recycled fluid easily, but the watering can is an easy way of then pouring it where its required. Finally after 2 or 3 watering cans full per Dumpy Bag, a covering of saved cardboard packing case pieces, weighted down with a log, adds a bit of extra insulation and prevents speedy washing out of the benefits of the nitrogenous material from the saved pee. 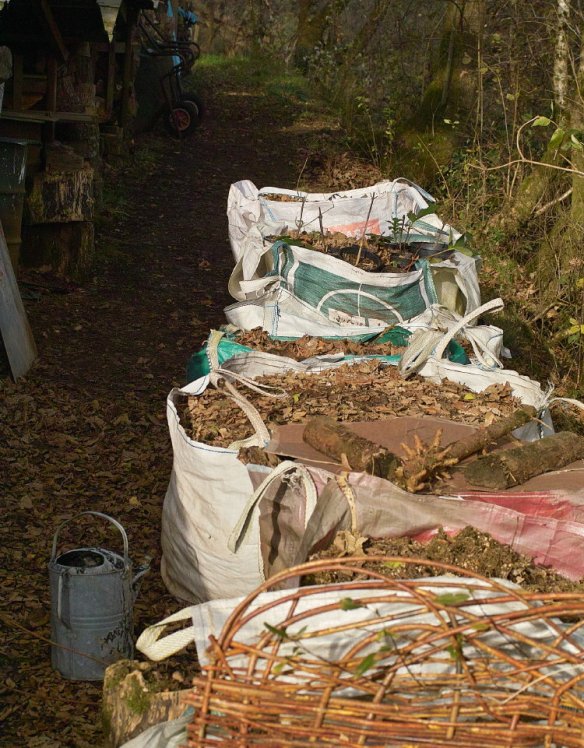 The leaf mould/ chainsaw waste woodchip Dumpy Bags, topped with waste cardboard, and the all important watering can for liquid nitrogenous material. One or 2 bags already have plants in pots for overwintering on top of the cardboard bag covers. 25/11/11

After last year’s severe winter I’m also transferring some of our plants in pots to overwinter by sitting them on top of the cardboard. I figure that a little extra warmth will be given off as the bags’ content composts down and may help some of the plants to survive – in any event the bags are located under the shelter of some mature sycamore trees, which will add a bit of frost protection. So these 80 year old commercial trees, no doubt gleaned as left over seedlings from the huge monoculture spruce plantations of the forestation of the Brechfa area, have yielded over a lifetime a huge wealth of valuable material to us as gardeners/small holders. Through self seeding on the bank behind the house, they’ve even provided us with our own Christmas trees for the last few years, and at least 5 more to come. Not bad for three single organisms in such an inhospitable environment. 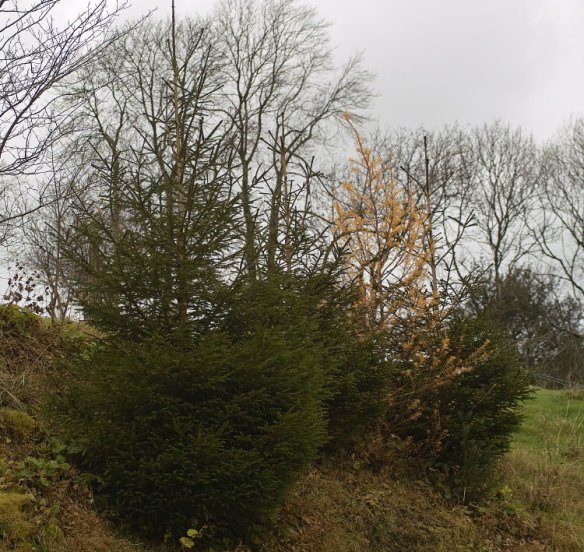 On the subject of Brechfa Forest, I’m indebted to Brendan for mentioning the poem “Rhydcymerau” by David Gwenallt Jones, as we walked up towards the Forest Garden in the Brechfa Forest last week. This is an area of experimental block plantings made over 60 years ago on the westerly slopes of a deep cut river gorge and incorporating a wide range of deciduous and evergreen tree species. Regrettably I’d not heard about “Rhydcymerau” before, although this is the name of our nearest village and it is a moving poem written in about 1951 to capture the sense of loss felt by the local rural community in having their beautiful lands acquired for commercial forestry by compulsory purchase in the 1930’s. Googling it, I found a recent lovely film by Huw Davies, including a spoken English version of the poem which you can access here by this link.

Intriguingly in view of the motivation for my own film (Epiphany in Translation) set in the same landscape, this piece closes with an image of the blades of an industrial wind turbine which are the next impositions planned for this landscape. However this time not introduced by the “English minotaur” imposter of Gwenallt’s poem, rather a German owned multinational in cahoots with the Welsh Assembly Government, who now through Forestry Commission Wales are responsible for managing this landscape for “the people of Wales”.

November 23rd and still no frost. As a consequence, for the first time since we acquired them as Christmas gifts about 5 years ago, three of our Camellia sasanqua plants have bloomed. We’d moved the 4 out of 5 varieties we were given (one perished early on), after 2 years of non flowering in their original position to somewhere with more sun. But we’d threatened them with removal this year if they didn’t flower. Whether they responded to this threat, or more likely have benefited from the strange weather this year, it’s been really worth the wait for blooms since the pretty flowers are slightly scented and are a real lift in the mild though short grey days of late November. Last week on Radio 4’s Gardener’s Question Time there was a request for a Magnolia cultivar which would survive 1,000 feet up in Northumberland. The response was that this would be a challenge, and even in Cornwall where Magnolias are more at home, in some years the flowers are completely lost following late frosts, but when they do bloom the display is so special that it makes up for those lost years. I suspect that the same thing will apply with these Camellia bushes up here, but we’ll remember this year’s mild autumn, and wait expectantly for the next one: 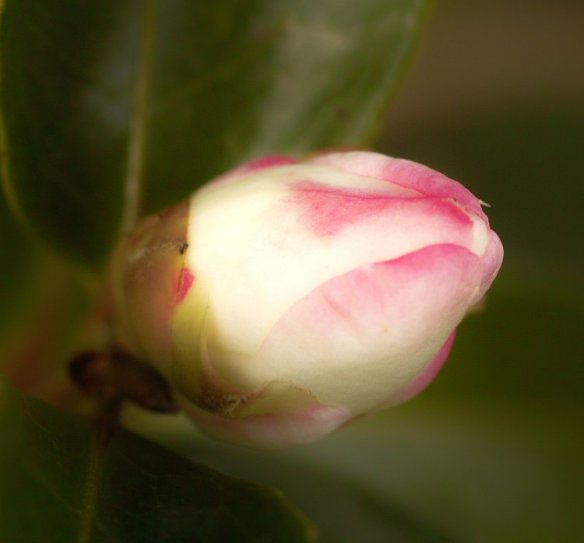 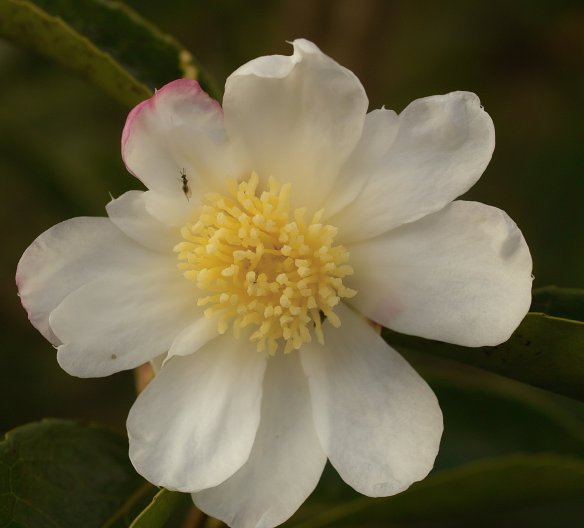 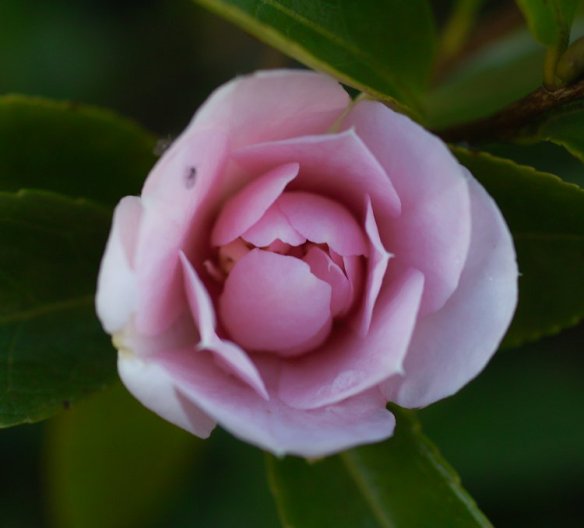 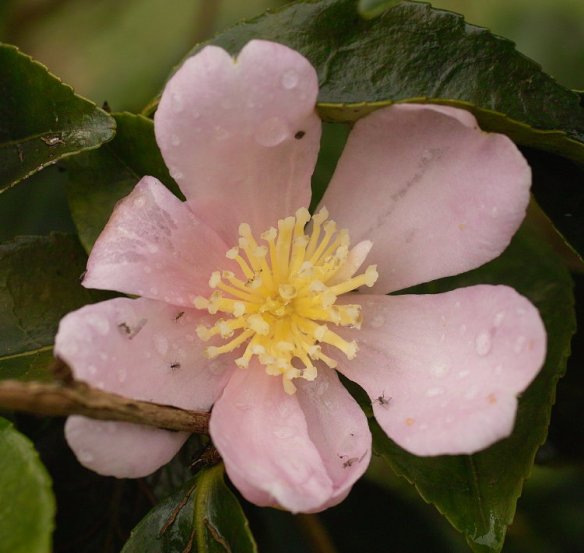 Lots of other plants are still putting on a good late floral show, especially Rosa “Bonica” and Rosa “Mermaid”. 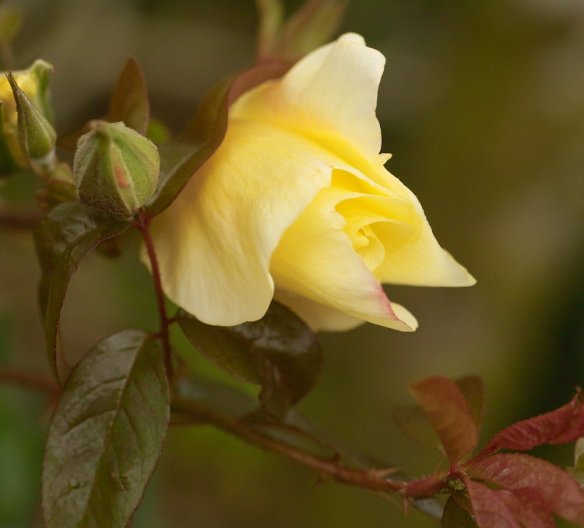 The last Acer palmatum has finally largely coloured up and lost its leaves, but it’s a delight that this tree, now perhaps 8 feet tall, was one that I raised from a pre- germinated seed. It’s outlasted its more illustrious named varieties for leaf retention, and its success is one of the reasons that this year I’ve had a big session of preparing tree seed for stratification. 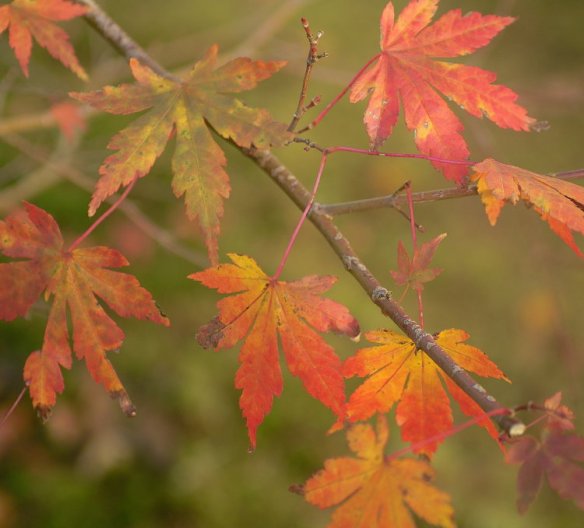 The last Acer (a homegrown A. palmatum from pre-germinated seed) to lose its leaves right at the end of November 25/11/11

I’ve mentioned before that the source of my original pre-germinated seed is no longer in business, but at least there is now a lot of information on-line about the optimum conditions for preparing tree seed for germination. I’ve opted to standardise this, since time is short, and most seed after cleaning and partial drying has been given a brief soak in warm water, drained, and then put with a label and some leafmould/compost in either the cut off top or base of a Tetra Pak fruit juice or milk container, wrapped in aluminium foil and put in the bottom of the fridge. I’ve now nearly finished the task, and the fridge has filled up pretty well, much to Fiona’s well restrained annoyance. 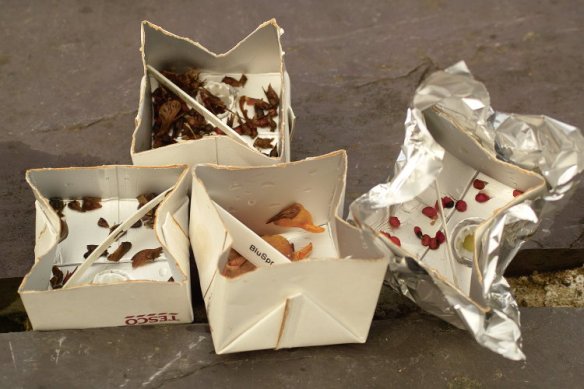 The cleaned seed and labels ready for wrapping. (I haven’t yet negotiated a deal with Tesco for product placement….) 15/11/11 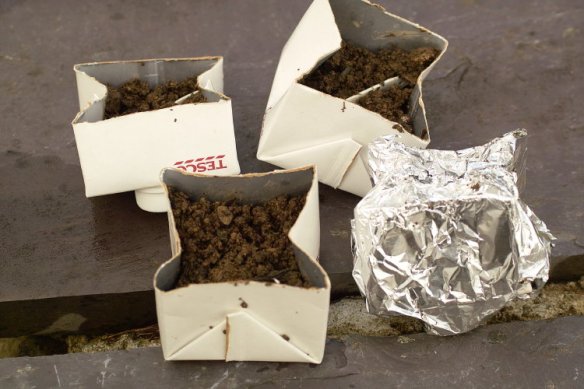 The cartons with seed, label and leafmould/compost before closing in an aluminium foil parcel 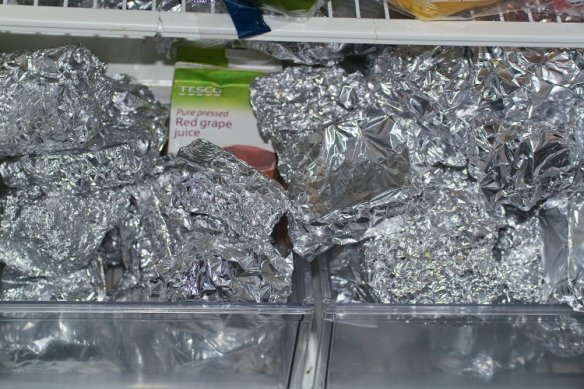 The plan is that after about 3 months at a consistently low temperature, I’ll sow some outside. Certain species like Viburnum and Cornus seem to require a warm period after this cold spell and then another cold one before the seed are able to germinate. In due course I’ll update on how the process has worked.

Meanwhile as I’ve been tackling the Norwegian Wood, Fiona has been doing her own little bit of recycling in anticipation of Christmas fairs by completing the last 3 of her unique Rag Dolls made from vintage recycled fabrics, and rather gorgeous they look too, as you can see below: 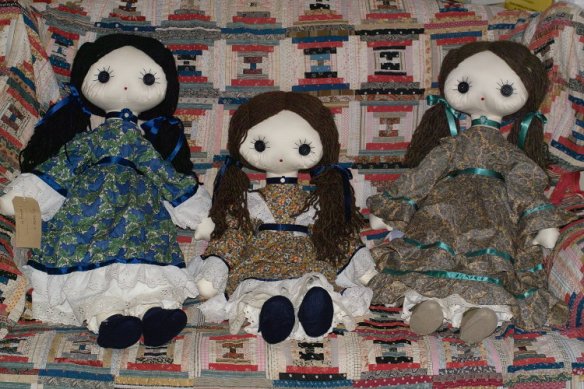 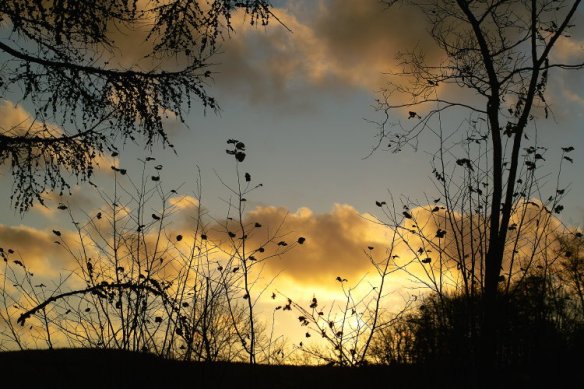 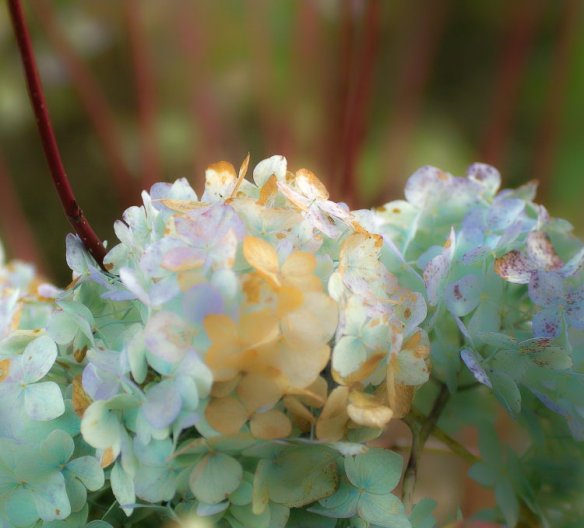 Not many roses to smell, but still worth making time to look at the colour variations in fading Hydrangea blooms 25/11/11 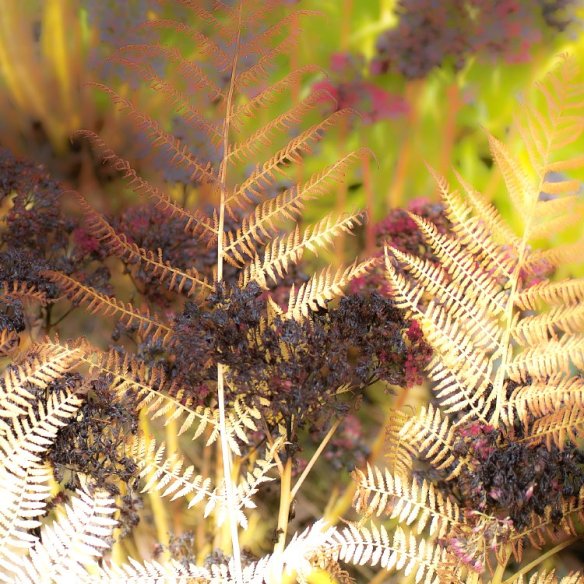 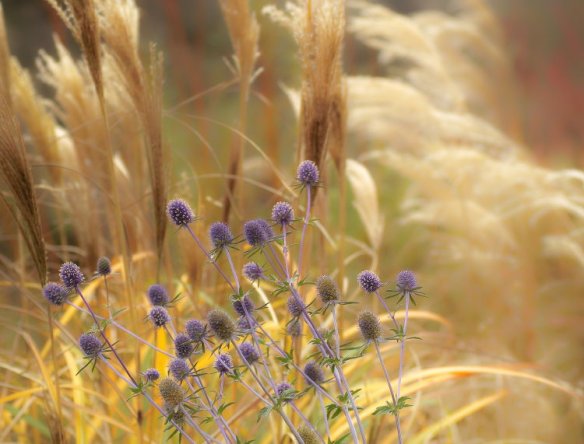 This chance planting combination has wowed me over weeks, particularly with low angle light and a strong wind…late flowers from Eryngium alpinum and seedheads of Miscanthus grasses, with some coloured Cornus and Salix stems in the out of focus background 23/11/11 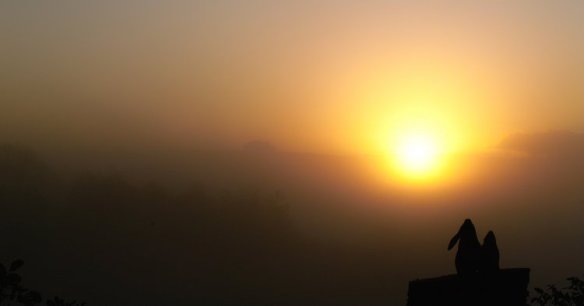 Sunrise on 17/11/11 The Southerly March of the Sun at Dawn is nearing it’s end point above the Black Mountain, as we move towards the winter solstice.