A fortnight ago we set off for a rare holiday, and en route stopped off at PenPont house outside Brecon to collect a Welsh Blanket, which by some fluke I’d won in a questionnaire raffle a couple of weeks earlier, after dropping my completed form into a lovely old butter churn. Some may spot a coincidence here since over the years I’ve been a collector of butter churns, having been fascinated by the number of techniques and designs used by people all over the world to manually churn cream into butter. En route to London we paused just beyond the manor at the public conveniences, near Bwlch, and I realised that the single low energy bulkhead light inside the gated but not enclosed space must be left on 24 hours a day, because the cream rendered wall was covered with a great selection of the moths still out and about at this time of the year.

My guess is that anyone travelling this route at night, or early in the morning during the summer months would be treated to an even more spectacular display, since the building is sited under mature trees, on the edge of a wooded valley – ideal moth territory. A few of the ones I saw are shown below – 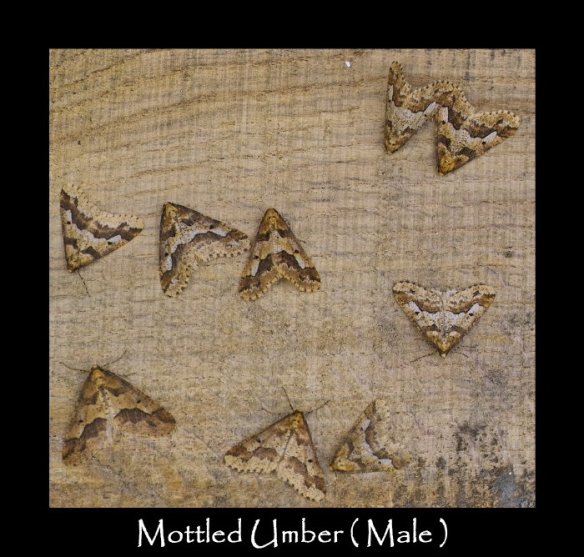 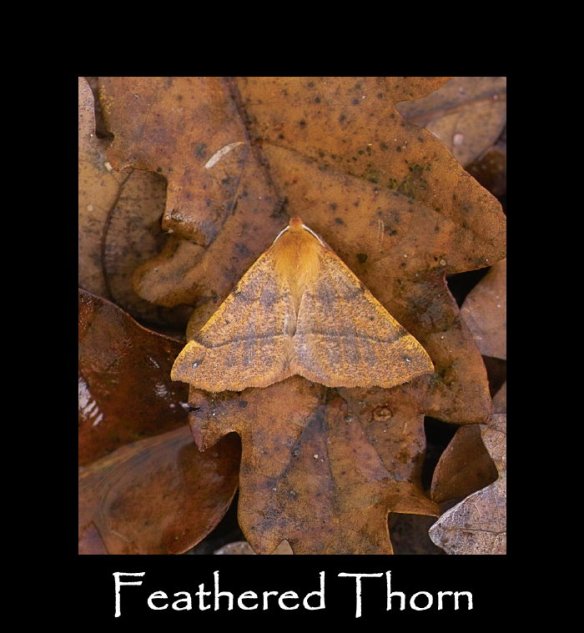 We were fortunate to be able to visit the RHS garden at Wisley a day later, and were particularly wowed by the meadow style planting behind the Great glasshouse which was even in early November a mass of small blue Asters, intermingled with grasses and Echinaceas. The real impact was created by the repetition of these themes over a large area, and apparently the display was only planted up a few years previously. I’m indebted to Fiona for taking most of the images in this blog. I left my bulky SLR behind in Pays de Galles.

Then on, via Eurostar, to Paris for a mix of culture, walking and gardens. Having been fortunate to have visited a few times previously we felt no need to ‘do’ the main tourist attractions again, but did slot in a few exhibitions including a stunning one recently relocated from the Victoria and Albert Museum in London and billed in Paris as “Beauty, Morals and Voluptuousness in the England of Oscar Wilde” – Oscar Wilde died in Paris and is buried there. It was interesting that the Musee d’Orsay chose to highlight the Parisian link with Oscar Wilde, since the V and A had it billed as “Cult of Beauty. The Aesthetic Movement 1860 -1900.” The video below gives a feel for the works on show at the exhibition, though this was filmed in London. We ended up buying the book accompanying the exhibition.

Paris has some wonderful accessible gardens, but we hadn’t seen any at this time of the year before, and we were fortunate to enjoy mainly fair weather and far more autumn colour than we’ve seen in Wales this year. Apart from the themed plantings of the Albert Kahn and Andre Citroen gardens:

A cloudburst seemed to add atmosphere to the Japanese garden in the garden at the Albert Kahn museum, Paris. Named after an affluent banker who as well as creating a large walled garden in central Paris around the early 1900’s, he also employed photographers around the globe to photograph the indigenous peoples of many countries. A a huge library of images allows changing exhibits in the museum, capturing the way of life of many of these people at this moment in time. 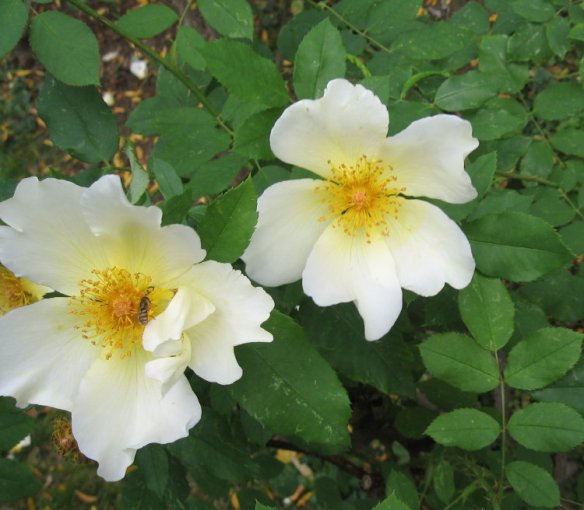 Rose ‘Golden Wings’ still looking good in the Yellow garden at the Andre Citroen garden Paris – a relatively new and contemporary styled park/garden laid out in the ’80’s on the site of an old Citroen factory towards the edge of Paris. 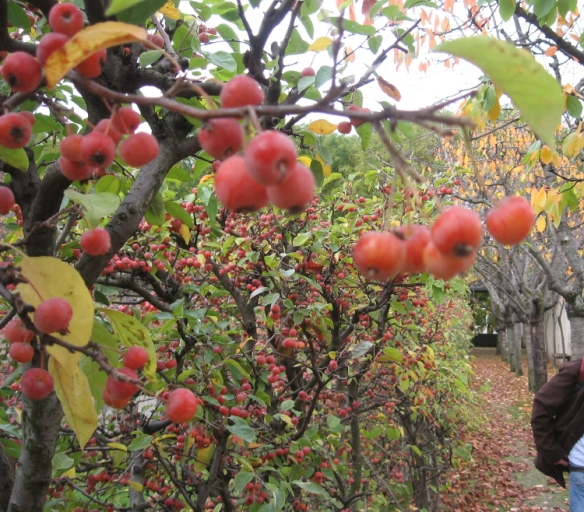 The real highlights were the Parc Bagatelle on the far side of the Bois de Boulogne, and the Parc Florale located at the city’s Eastern fringe in the vicinity of the imposing Chateau de Vincennes. The Parc Florale was stunning in the extensive planting of Azaleas and other shrubs, beneath mature pines. Acers and many unusual groundcover plants, as well as a bank with 4 spectacular and different Euonymus bushes in full autumn leaf finery ranging from burgundy, pale lime green through to bright scarlet, also wowed us. 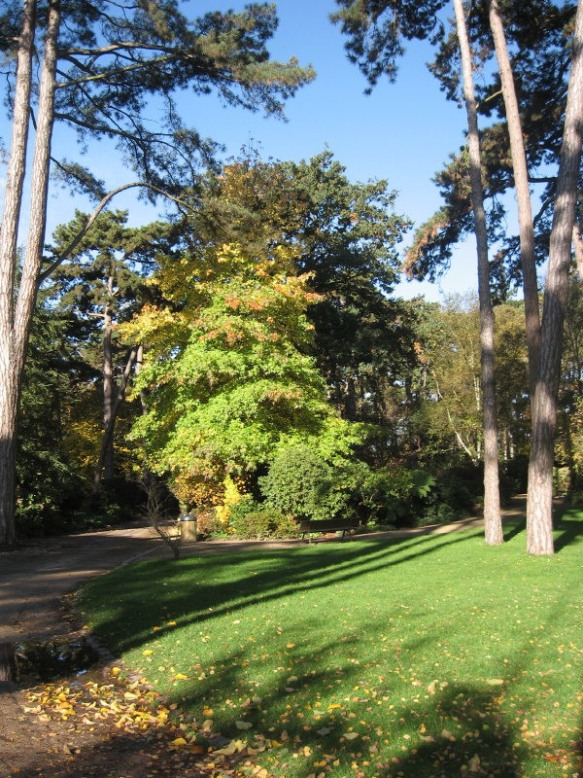 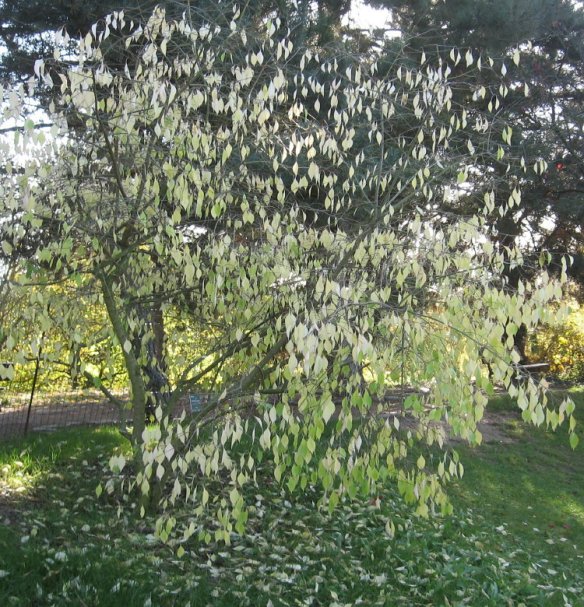 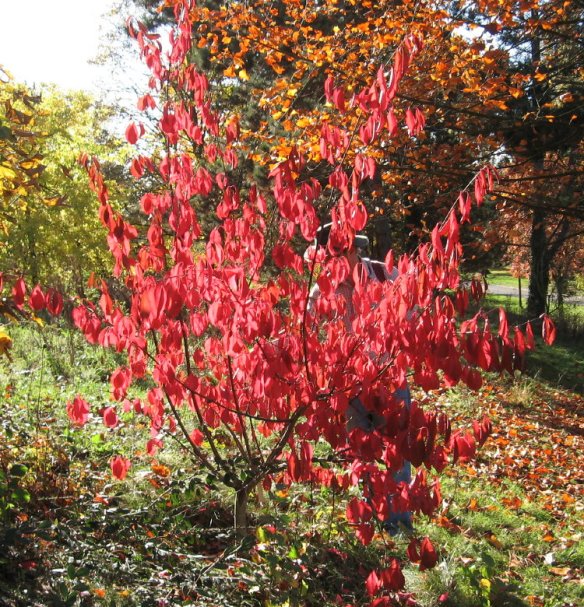 Beneath these at the foot of a bank, 2 unusual Malus species, one unnamed with stunning autumn leaf colour and another, Malus trilobata, with interesting three lobed leaves.

It being late autumn many of the plants we saw had fruit or seeds, and we returned with several varieties to see if we can get any to germinate. On leaving the Parc, and next to the Public Conveniences, Fiona was delighted to spot and photograph a Red Squirrel.

I haven’t seen a Red Squirrel for decades – this French one even chuckled for us. (Or perhaps cursed at us!) Parc Florale 3/11/11 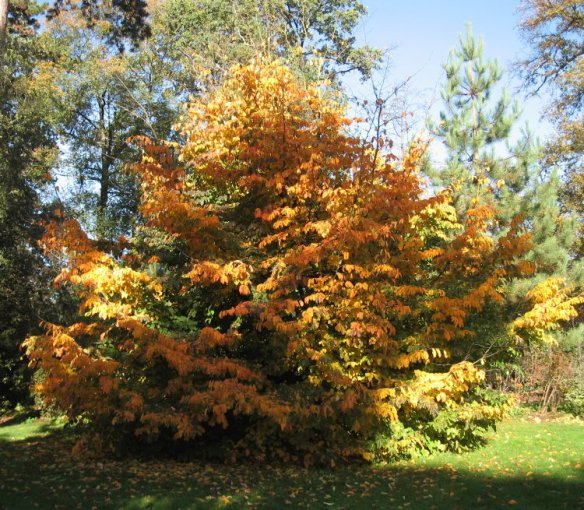 A spectacular French Parrotia persica – after the comments in my last blog we saw many showing wonderful colour, but interestingly most of them seemed to have more of an upright form than the spreading ones often seen in the UK. Parc Florale de Paris

The Parc Bagatelle has a small entrance charge unlike the free (at least at this time of the year) Parc Florale, and features amongst many interesting vistas a large formal rose garden with hundreds of rose varieties, many still in flower when we visited. Other highlights here were a stunning over 200 year old Swamp Cypress (Taxodium distichum) lighting up a lakeside scene with its fiery orange glow, and an enormous Gingko bilboa which was carpeted below its spreading branches with a mixture of fallen butter yellow leaves and small soft peach/lemon fleshed fruit – which I’d never seen before. Again a few were collected, but this is not for the faint stomached, since the decaying fruit have a strong aroma of vomit! Perhaps this is why the numerous geese and peacocks which inhabit the park ignored the fallen fruits. 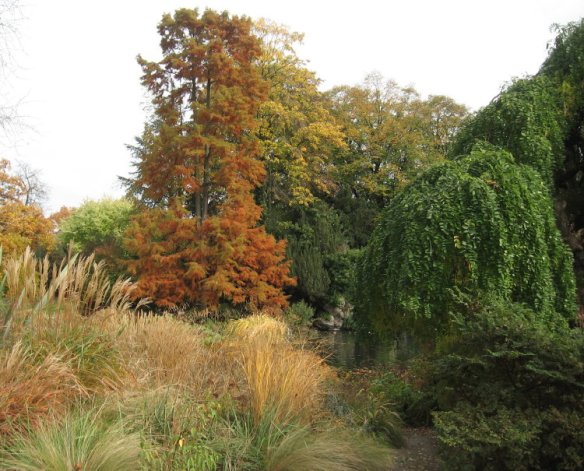 One of the oldest Swamp Cypress,Taxodium distichum, in France.  I had no idea that they grew this tall. Spectacular tree in the Parc Bagatelle 2/11/11

Peacock amongst what might be fallen Acer cappadocicum leaves. Parc Bagatelle 2/11/11 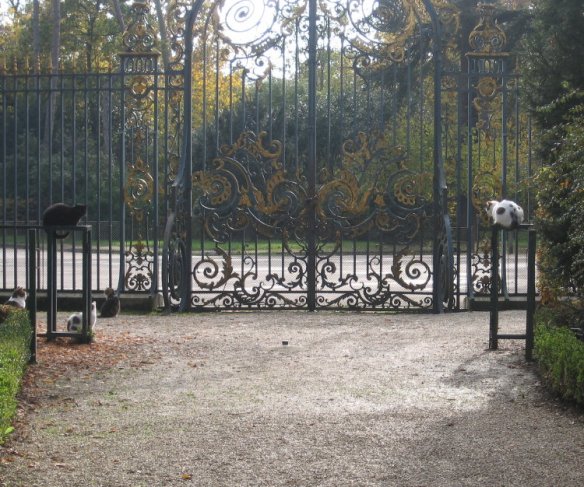 Another fleeting scene…seated plinthed moggies at the ornate entrance gates to the Parc Bagatelle.

It was with some regret that we left after our week, and returned as the French newspaper weather forecast section proclaimed for Monday: “Gris. C’est gris’. Indeed, the UK too was gloomy, grey and soggy on our return, but as always, it’s nice to return to one’s familiar bed, with bird song rather than honking horns at daybreak, and the sorely missed piano.

No chance to relax though since leaves need sweeping up, and some new roses arrived the following day, so have been planted in time to benefit from the still warm soil conditions. Although the first local frost of the year hit a few days ago after a sunny weekend, it seems as though we escaped here, since the Saxifrage fortunei, always a sensitive barometer of freezing conditions, is still flowering and setting seed. The last 2 nights, to continue on the wildlife / PC theme, we have had our evening session on the internet interrupted by a large bat which has found an as yet unlocated crack to exit into our bedroom and fly frequent passes, skimming our heads and even continuing once we’ve retreated to bed with the lights turned off and the sheets pulled up round our ears!

Tonight as the rain lashed down I nipped out to retrieve a colander full of carrots which I’d pulled earlier from inside the greenhouse, to catch a mouse in the torchlight. Apparently disoriented by the bright beam it jumped in large randomly directed arcs before making it to the relative safety of the border. But how much energy must such a small creature like this lose being out and about in such atrocious conditions with a strong wind blowing? Perhaps the carrots were a worthwhile target. Certainly, earlier in the week the same mouse or a close relative had meticulously dug up 90% of my collection of saved French acorns which had been sown about 3 inches below soil surface in a Dumpy Bag.

A couple of examples of the apparently tasty French acorns, and leaves of their mother trees. 3/11/11 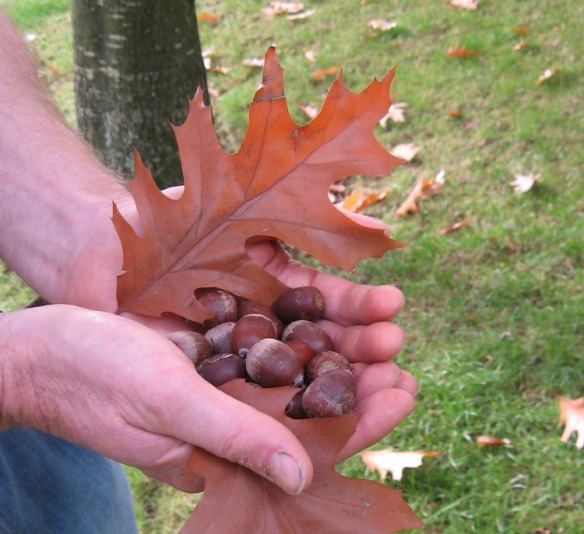 What a sense of smell to find them so quickly! With another batch still to be planted, I gave then the cayenne pepper dusting which I’ve previously found has been helpful in preventing digging up of Crocus and Tulip bulbs. In spite of the hoped for protection, within one night of being sown in a different part of the garden to the first batch, the last acorns had similarly been targeted – whilst homegrown acorns litter the ground nearby. Maybe as with many gastronomic delicacies, French produce really does have the edge?

So, in a 10 day period of interesting wildlife sightings, I have to finish with my second significant close encounter with a wren. The first happened and is documented in “Epiphany in Translation”, when a wren landed fleetingly on my hand. Yesterday as I tidied up vegetables in a Dumpy Bag near our PV panels I watched a wren land a few yards from me, then fly a bit closer and land under the panels, and finally take off again and head towards my head. As is my custom I was wearing a soft hat, and I was then aware of it landing on top of my hat, and spending about 10 seconds inching round the rim, with nothing for me to see but the tips of its nails, and nothing to hear save the occasional soft, subtle sound.

I shall be fascinated to see if my wren encounters, having started late, continue over the years that we live here or whether like many things in life, they come in threes, and are then never repeated. I’m still a bit taken with thoughts of what previous existences this small collection of atoms, for now shaped into the form of a small bird, may have had, or indeed how many times they have been rearranged in living forms over the previous 300 years or so that a house has stood on this spot. It does seem to me that a sense of history and spirit pervades the natural world around here.

The Liquidamber ‘Worplesdon’ continues to match any of the spectacular leaf colours seen in France, though at last some leaves are falling. 5/11/11

4 thoughts on “Travel, Couleur, Culture and Wild Life near PC’s”