Writing these pieces occasionally when I get the chance means that there’s an inappropriate time lag for today’s 24 hour rolling news savvy readers. So, since I must record the fantastic start to October with the hottest days of the year up here, I’m doing so on another gloomy wet day, with the Welsh Indian summer now a receding memory. 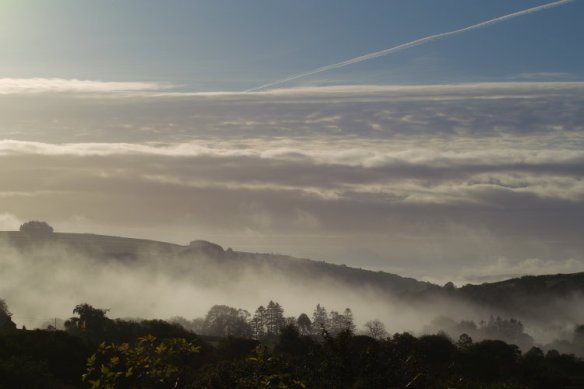 Disappearing clouds herald the start of our brief, but very hot, Indian Summer 26/09/11

But what a few days of glorious warmth and fabulous clouds and sunrises. Pretty much for the first time this year about a week ago after waking to an eerie orange glow diffusing through our West facing rooflights, I pulled back the blind to see high grey clouds underlit with pre sunrise light. I dashed downstairs in nightshirt and dressing gown, grabbed the still and video camera, and just made it to the top of our field above the house as the sun rose over the Cambrian mountains to the East.

About half an hour passed before the morning fireworks had waned, but throughout this time the landscape awoke, and the morning commute of many birds from their night time roosts to daytime feeding areas started in earnest. Most are oblivious to an oddly dressed figure with an upwardly pointing camera, but I guess through bad experiences any wood pigeons heading my way made an immediate deviation once they’d spotted me on the ground below.

The other striking feature has been just how warm (15 or 16 degrees C) it’s been at daybreak.

Encouraged by the forecasts which predicted that the anti-cyclone responsible for this weather would linger for a few days, on Tuesday morning a week ago I leaped out of bed with absolute certainty that I would take down the two rapidly growing Douglas firs in our mainly larch copse. They had reached over 60 feet, and were sucking water from the top of this area and seriously limiting growth of the deciduous Azaleas beneath. We don’t take mature trees down all that often, but have realised during our 18 years of ownership just how quickly but insidiously this type of conifer will grow, and have worked out that by replanting and judicious removal, we can work towards a more interesting progression of trees in this area, whilst allowing the understory of shrubs and groundcover to flourish. So with a Caesar like certainty of condemnation that the trees would come down, I togged up in protective garb, and fired up the saw. 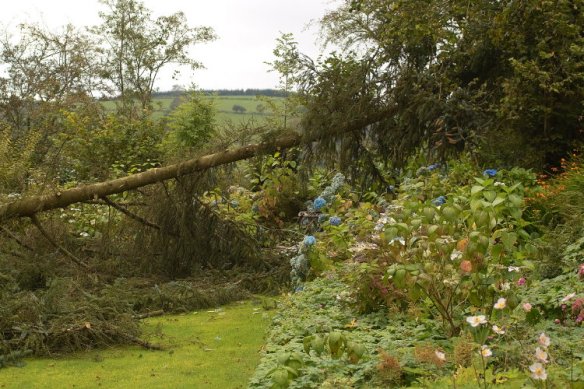 No problems with fir number 1, though its length was a bit longer than I’d estimated, making it right across our crazy croquet lawn. 27/09/11

Fir one was felled with no incident, and little collateral damage, though my estimate of its actual height was a little misjudged, and its tip clipped into a hazel bush on the far side of our mossy croquet lawn. Fir two was always going to be a bit trickier, since it was a bit thicker, and its branches were a bit more unevenly spread. Without going into the full, scary preamble, it refused to fall where intended, and after a moment where I was concerned it would fall towards me, it started in the correct direction but almost immediately as the wind gusted a bit, it fell 90 degrees to the left. As Fiona joined me to see the wreckage, she wasn’t amused by my attempt to look on the bright side – at least we were both in one piece!

The gobs and back cuts look pretty similar, but the direction of fall was not!

Indeed we were, and very fortunately there was pretty minimal plant damage – the trunk having bisected two developing Acers, and coming to rest across our boundary bank and hedge. But sadly not having contemplated this direction of fall as being likely, I hadn’t taken the precautionary step of moving a couple of chairs out of harm’s way. Whilst the flattened one could no doubt be bent back into a normal shape, I feel that it should be left as a reminder that in future, if in doubt, I should get a professional to get the tree on the ground, or in any event, that it’s extremely important that you open your gob in the right place. For those of you unfamiliar with logging jargon, a gob is the small segment taken as an initial cut from the tree trunk on the side you wish it to fall towards. In this case the gob was not quite wide enough, and my saw blade about 1 cm too short to completely sever the trunk when the back cut reached the gob, and this marginal error was at least partly responsible for my nearly disastrous mistake!

The misbehaved trunk, which just missed squashing completely our 20 year old Acer japonicum aureum. If you look carefully at the stump you can see the thin, torn strip of bark, less than 1 cm deep which remained un-severed by the back cut, and caused the trunk to fall in the direction shown.

Not so fortunate was the chair, which will be retained as a reminder to think twice before major tree work in the future

40, 30, 12, 12 and 2 is a number sequence which came into my mind this week. The 40 part was the apparent age of these felled trees, judged by ring counting once they were on the ground. Since they were about 60 feet tall this would equate to about 18 inches of annual growth which many types of trees manage with ease in our damp climate. It also ties in with an aerial photo we were once shown by an itinerant salesman who reckoned that he’d inherited a stash of such photos which his father had taken of farms in the area just over 40 years before. The photo showed a vegetable garden where the mature larch copse is now. As the branches were tidied up over the following 3 days, and then quickly incinerated in a resin fuelled inferno, I did reflect on the biomass produced by simply ‘being there’ through thick and thin over this period.

Even green, 2 days after felling, some newspaper and a single match were all that was needed to dispose of 40 years worth of top growth 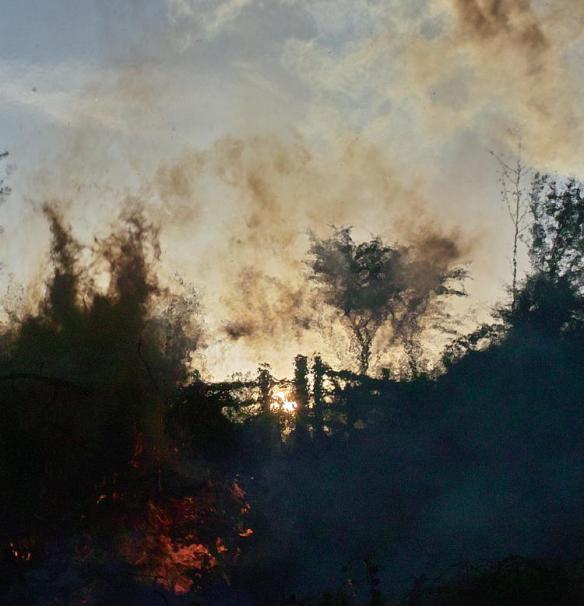 The larger branches and trunks will provide valuable fuel and kindling for quite some time when dried, and the enormous pile of brush was reduced to two whitewash tubs worth of wood ash, which will return to the garden in a simple but effective recycling or rebirth. We currently import very little external nutrient for any of the garden (apart from some dried seaweed) using just leaf mould, rotted wood shavings and wood ash from the wood burning stoves and such bonfires to keep things growing vigorously.

Ten years after the trees must have begun their reach for the sky, I qualified as a veterinary surgeon, and this last weekend we trekked back to Cambridge for a re-union and tour of the now considerably expanded and modernised Vet School. One of the reasons the event had been planned was that a couple of my contemporaries had recently learned of the sad death of one of the year of about 60. This gave them a sense of urgency about the gathering and it was indeed interesting to see what my contemporaries had got up to in the intervening years. As I suspected, surprisingly few were still working in general veterinary practice, with many in academia, research, overseas or retired and pursuing other interests. We continued on from here to visit for the first time my brother’s house on the Suffolk coast and were then amazed to discover today after a phone call with our county N.G.S. organizer, that she knew the exact farmhouse involved and had visited it many times over the years – what a small world! 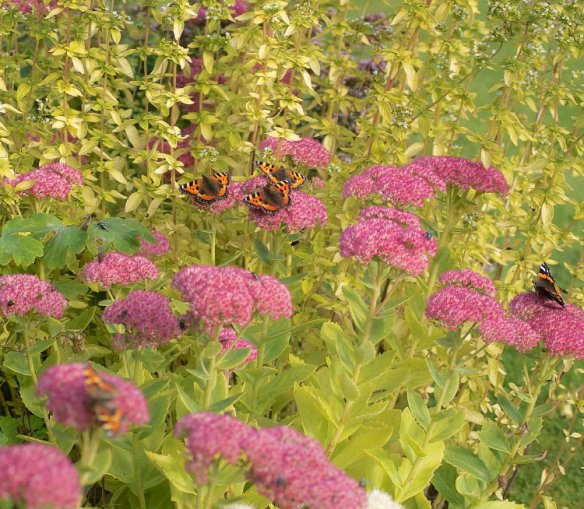 The Sedum spectabile brings a final butterfly flourish into the garden with more seen simultaneously than ever before. 27/09/11

The final 12, 12 and 2 in the number sequence were the numbers of Small Tortoiseshell, Red Admiral and Comma butterflies that I counted last week in 5 minutes walking round the plantings of Sedum spectabile which we have in various areas of the garden. 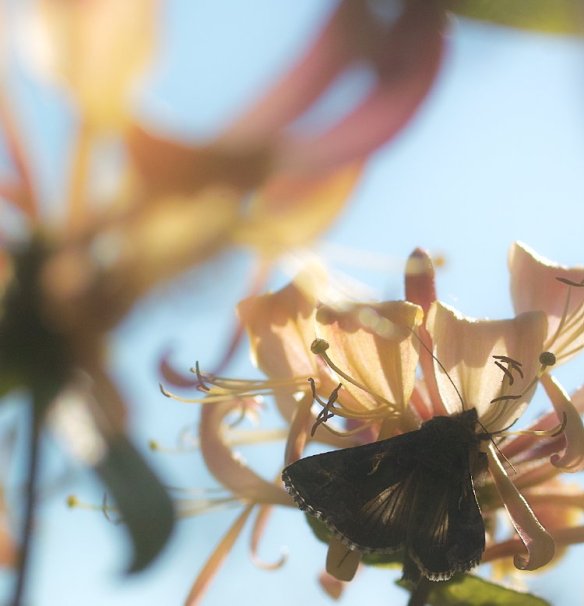 In this strange end to the summer, migratory Silver Y moths still linger on the flowers of honeysuckle, flowering better with its second flush than in June 27/09/11