The gap since the last post was caused by a very busy period of garden activity – more later, but a couple of night ago I walked out into our copse just as dusk was falling. The air was laden with moisture – nothing has really dried out for days with little sunshine, and there was no wind. As I reached the split in the mossy path beneath the oak tree, I was suddenly aware of a strong distinctive smell. A few yards further on, and the smell had disappeared, but as I paused and tried to place the smell, whilst listening for any unusual sounds in the fading light and complete quietness, it came to me what I thought the smell was …. rabbit urine. Over the last 3 weeks there have been the tell-tale signs of fresh rabbit activity; shallow scrapes and pellets and this is primarily how rabbits mark their territory, but I haven’t smelled urine before. As I walked back a few minutes later the smell hit me again in exactly the same spot. I checked on-line, and rabbits will spray urine as a defensive mechanism if attacked or frightened, so had I disturbed a rabbit moments previously, or might it have been frightened just before I walked past? Certainly the atmospheric conditions probably helped me pick the scent up. The following morning outside there was a strong scent from the low growing creeping Geranium which covers the bank and is still flowering now.

We acquired this years ago from a small nursery in Talley which no longer exists, and we’d eventually recently rediscovered its name which is Geranium procurrens, and it hails from the Himalayas. It always releases a strong aromatic almost herby scent when trodden on or brushed against, but it was unusual to detect the smell simply standing close to it, as I did on that occasion. It’s a great plant in this location flowering from August to the first frosts but I suspect would be a bit of a thug if grown in better soil. Finally today back in the copse, I smelt an unpleasant rotting smell a bit like that emitted by Stinkhorn fungi which we have seen quite regularly between the larch trees, but not for the last 3 years. Following my nose brought me to this decomposing fungal mass between the mossy roots of an oak.

Could this have been the cause of smell number one after all, and not a rabbit? Walking past the lovely Saxifrage cortusifolia ‘Ruby wedding’ growing close to where I’d smelt the rabbit urine before, and which had flowered just a few days earlier, made me think that my initial diagnosis was after all correct. All but one of the pretty flower stems had been cut off. 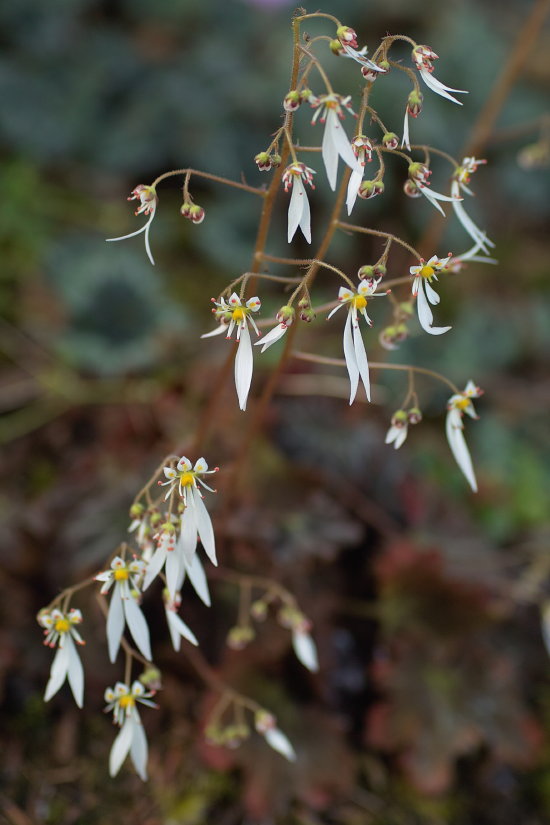 I think that it will have to be moved, since it sits beside one of the mossy paths, and is therefore an easy target for a nibble by a passing rabbit.

Regular readers will know that I’m no longer using Pathclear on the paths or drive, which has had a minimal top-dressing this year with 20 mm grey limestone chippings. This seems to provide pretty good germination conditions for the seeds which are still there, or arrive there however that might happen. I think that it creates a moister micro environment, but also with added warmth – so much so that I might try using it on some of my pots of seed as a germination aid. Last week having noticed about 20 Geranium sanguineum seedlings growing in the gravel close to the plantings at the gable end of the house, I carefully prised them out with an ancient very sharply pronged fork and potted them on. Whist many were pretty close to the nearest Geranium plants, several were a few feet away. But then today I found one 25 feet away from the nearest Geranium.

The Geranium seedling is at the bottom of this picture. the plants it came from at the top. How’s that for a fling!

This got me thinking, and reaching for a tape measure. The dispersal for such Geranium species or Cranesbills is based on the catapult principle. The seed is held in a tight casing, which as it dries out in warm sunshine will suddenly dehisce from the style, curl back and in so doing fling the seed outwards and away from the plant. But 25 feet away? Is this a record? Or was it carried further by some animal? I think this is unlikely since the seed are small and would fall between the gravel chippings, and if this were happening then perhaps they would appear all over the place, which they don’t. But assumimg that it was just flung by the plant, then what a feat of flinging. What does the internet have to say on Geranium seed flinging? Sadly no details that I could find. 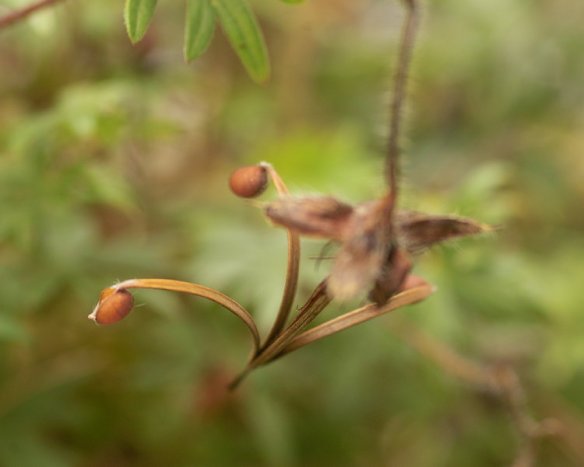 There was a recent paper on the dispersal of related Stork’s Bill or Erodium seed, but these seed aren’t smooth like the Geranium so will have much more air resistance. Only a few feet of distance was recorded. But as a ratio of distance flung to length of flinging structure, measured at a maximum of 25 mm for the whole of the Geranium’s dried out ‘arm’, I came up with a ratio of about 300 to 1!! Pretty impressive. But how does this compare with say a person throwing a cricket ball? Well as luck would have it, the day before I wrote this there was a posting on Cricket World by someone claiming to have set a new world record of throwing a cricket ball 132 metres. Assuming an arm length of say 80 cm, that would give a ratio of about 165. So the passive Geranium fling, beats a world-class thrower with considerable practice, and muscular activity. What about Trebuchets (those man-made constructs from the Middle Ages) used to fling stones or other heavy objects at the enemy before the invention of gunpowder? Well there are some contemporary Trebuchets, one at Warwick castle apparently flings rocks for a ratio of 16.66 times the arm length, and one in the U.S.A. used for pumpkin flinging (I thought only the mad British went in for such unusual sports!) flings at a ratio of 38.75 times arm length. So can anyone find a natural or mechanical flinging mechanism which beats the ability of the Geranium seed pod, (powered as it is simply by the stored energy within its drying tissues) when measured by this ratio of distance flung, to flinging arm length?  Of course there is the added variable of weight of object flung, relative to size of the flinging arm, and the possibility that some of the Geranium plants are growing in a half barrel and so raised off the ground by about 18 inches……but I think heading down this route is strictly for those with University degrees in physics.

My guess is that such analysis of the flung Geranium seed would probably anyway demonstrate that its close to being an optimal weight, and shape for aerodynamic flight. Interestingly the recent paper mentioned above on the Erodium seed, explored the ability of the seed design which I’ve long admired, to power its way into the ground thanks to its corkscrew shaped awns, which flex and move as humidity levels change. I can’t just now find an image of one of these Erodium seeds – I think I’ve sown them all, but will see if I can glean one for my next post.

Doing some late autumn weeding brought me upon a half tyre of 2 year old Agapanthus seed which had germinated really well, just a few weeks after sowing . But will they survive the winter?? And so onto the many trees which I’ve grown from seed. Actually most of them were sourced before the internet really became a useful tool, from a nursery near Usk which had an extensive list of pre-germinated seeds from trees which required stratification to break seed dormancy. The Usk nursery carried this out, and what you then received were a succession of wedding cake like small cardboard boxes which appeared in dribs and drabs in the post from late January onwards. Within some moist peat inside a mini grip plastic bag were a small number of seeds of the chosen species, with the roots and sometimes first small leaves just appearing. It was a really exciting psychological lift in the depths of winter/early spring to get these small parcels of new life, and now perhaps 15 years later, several of the trees are becoming nice specimens. I’m including a few photos below.

We have 3 Cornus Kousa chinensis from pre germinated seed. One got planted out early and is over 15 feet now. The remaining 2 languished in an overgrown small pot for years, but now are relishing their freedom, and will soon be approaching the size of the first, I think 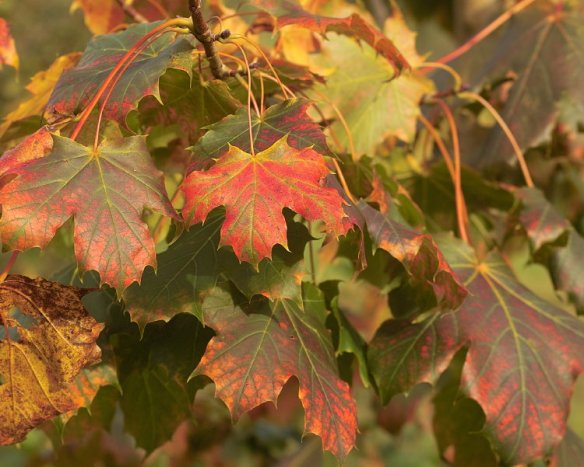 Even in this poor year for autumn colour, Acer rubrum colours nicely 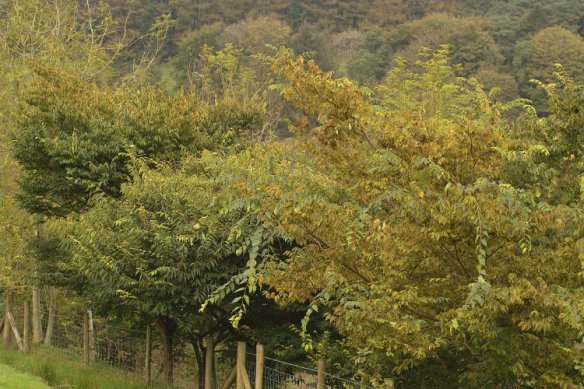 Several Zelkova serrata trees, all with variable forms and leaf colour, but always holding onto their leaves well into autumn, before yellowing gracefully 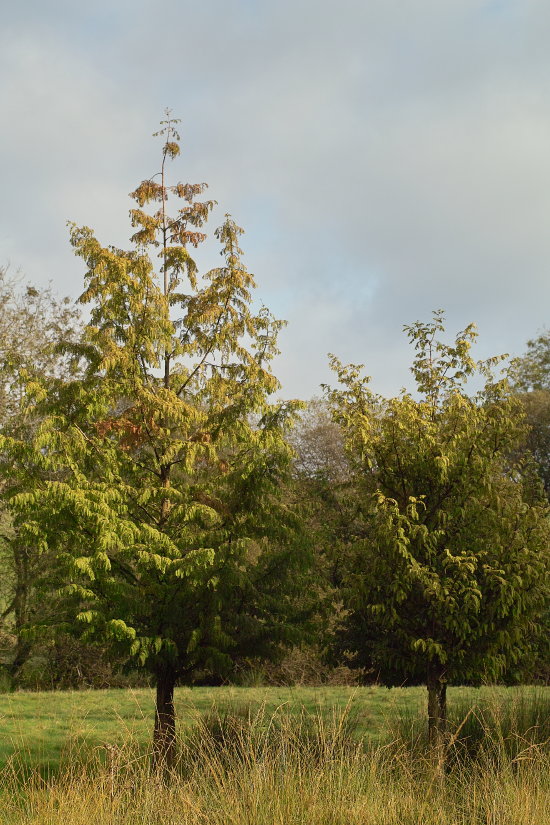 What a shame that the nursery no longer exists – someone told me that the owner had emigrated to New Zealand. My tree seed purchases therefore stopped perhaps 10 years ago. But I’m now going to have a go at germinating some of my own seed after having some success with Acer griseum last year. More of this in the next post, but to replace the trees felled recently with something more interesting we also made a trip to F.P.Matthews trade nursery near Tenbury Wells and were hugely impressed with the size, range and quality of the stock. Several trees bought there have been planted already to benefit from the recent warm October weather ….. not a moment too soon, I think. Yesterday, much earlier than I can remember in previous years, a large flock of chattering, chuckling Field Fares worked the hedgerows. The locals call them snowbirds, since they’re usually seen in snowy weather…and indeed today on the week’s gardening forecast, there was the warning of much colder weather ahead, and perhaps even snow before the week is out! And then driving up over Mynydd Llanllwni a flock of about 70 mainly migratory Golden Plovers angling low over the moor. They regularly over winter on the mountains bleak top.

The still golden glow of last Saturday morning lasted until 10.30 am as the Welsh Nation was glued to TV or radio …. sadly the result of the Rugby world cup semi final on the other side of the world didn’t match the stunning weather back home. 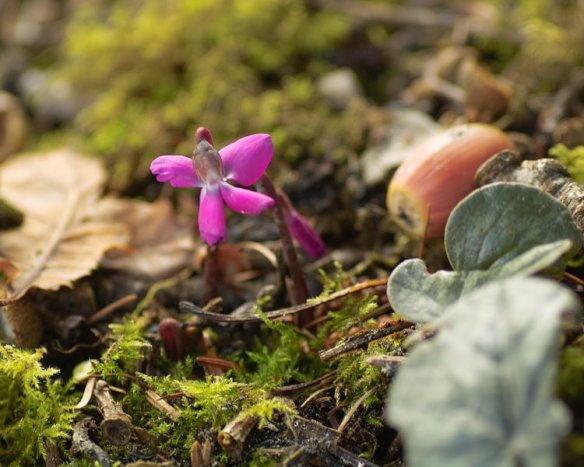 The first Cyclamen coum flower of the autumn. More than any other flower, this gets me through the dark days of late autumn and winter. Remarkably tough and growing right up to the base of our large Oak Tree, these little jewels of colour survive frost and snow, and continue right into March. By hand pollinating them every year, their numbers are steadily bulking up. More than any other flower or point in the year, this signifies for me a new start, and heralds a new gardening year. 13/10/11

Most of our Hydrangeas are past there best, but this one ‘Brussels Lace’ always brings up the rear and lights up its part of the garden in mid October 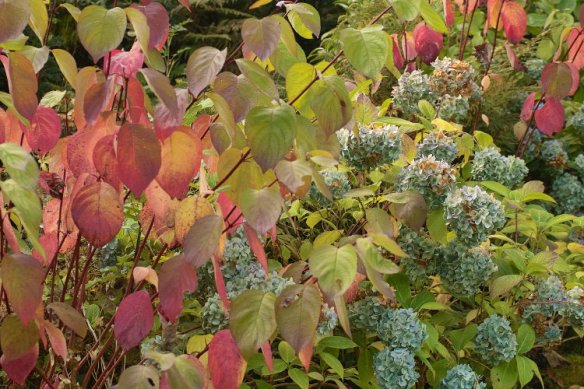 Something I really look forward to for the whole year, the flowering en masse of Saxifrage fortunei rubrifolia, from now until the first frosts 14/10/11

Our garden at Gelli opens by appointment for charity most of the year under the N.G.S. Please see our website for contact details  www.thegardenimpressionists.co.uk