Four interesting observations and 2 wonderful new garden discoveries for us, and all in a week when the weather has been profoundly gloomy. The 2 new gardens are both privately owned and created by their current gardeners, and both are also in the N.G.S. in Carmarthenshire. The first we visited was ‘Llwyngarreg’ near Whitland. Nearly 3 acres in size and described as a plantsman’s garden, we were hugely inspired by Paul and Liz O’Neil’s vision and hard work in creating a spectacularly beautiful garden even at this difficult stage of the gardening year. Many mature trees, (several grown by themselves from seed), the best grass bed we’ve ever seen, and a wonderful welcome made our trip a highlight of our gardening year.

Secondly a couple of days ago we visited ‘Cilgwyn Lodge’, and again received a warm and generous welcome from Keith and Moira, and a very different but again stunning garden with pond, herbaceous borders, mature shrubs, and productive vegetable area. Masses of flowers still in bloom and aesthetically grouped, many unusual plants including lots of Asters and more butterflies and other insects than we have seen in any other garden this year. We would love to revisit both gardens at different times of the year – like a great restaurant, I’m sure they won’t disappoint during any season. How fortunate Carmarthenshire is to have these privately run gems to put alongside the great National Botanic Gardens of Wales at Llanarthne. If you get a chance next year, do book a visit (although Keith may have reduced opening since a new conservatory is being planned). 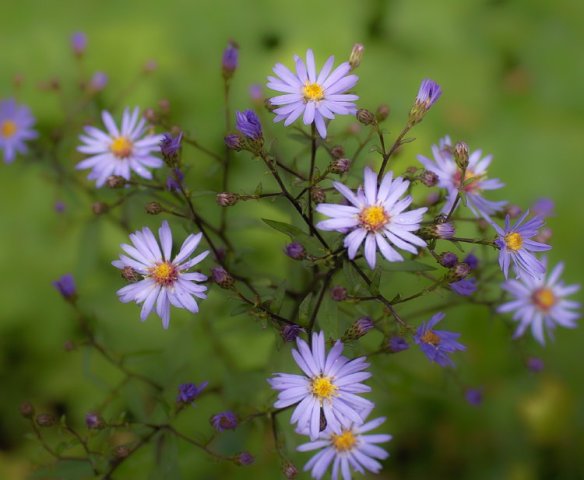 More Asters opening up as the month progresses 22/09/11

Now for the 4 observations. I did a double take as I walked into our woodland copse about a week ago. A sycamore stump right at the base of our large oak tree, which has taken me a couple of years to finally see off with a combination of regular pruning and applications of glyphosate had apparently overnight become covered with hundreds of yellow-brown toadstools. 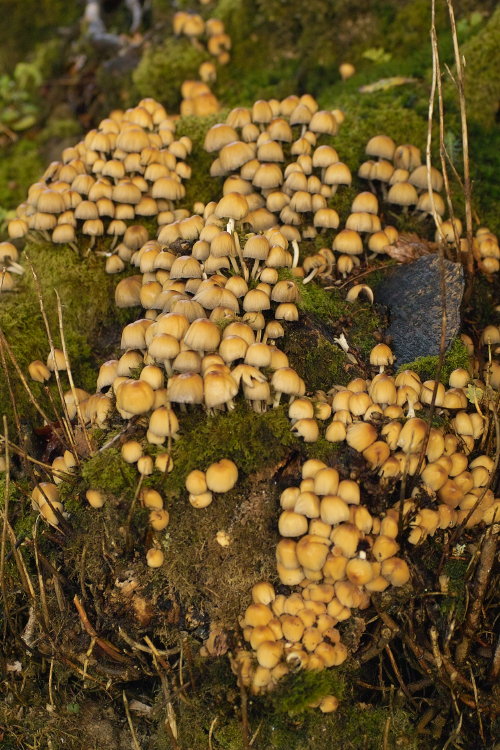 Looking them up in Roger Phillips’ excellent guide to British mushrooms, they appear to be Sulphur Tufts or Hypholoma fasciculare. The strange thing was that they had appeared so swiftly and in such profusion. I walk this bit of the garden most days. What was equally surprising was that 2 days later they had all but vanished – a real example of how speedily and dramatically things can change in a garden or the natural world. 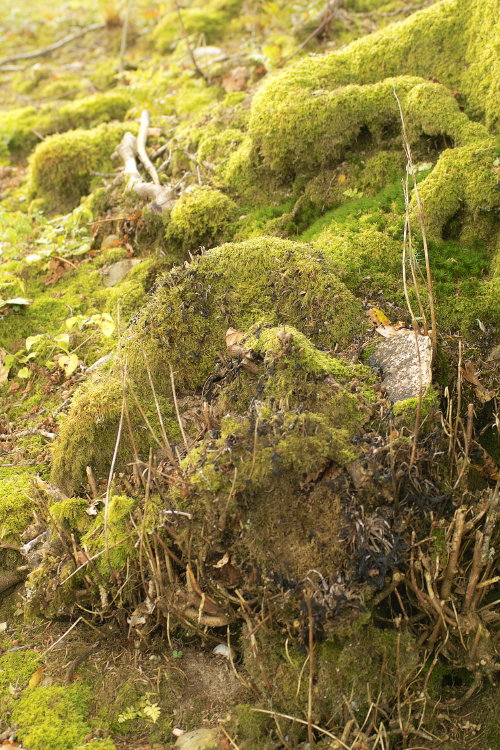 2 days after the previous picture, this is what the stump looked like- the mushrooms produced and now decayed, spores dispersed, so job done as far as the underground mycelium is concerned, at least for this year. Will they reappear on this stump in the future? But what a wonder of nature.

Next a chance trip out to the compost heap with some vegetable peeling at about 9 pm one night had me catching a toad doing what I can best describe as ruminating (except they don’t have a rumen) – regular quiet ‘chewing’ and swallowing movements like a cow chewing the cud. 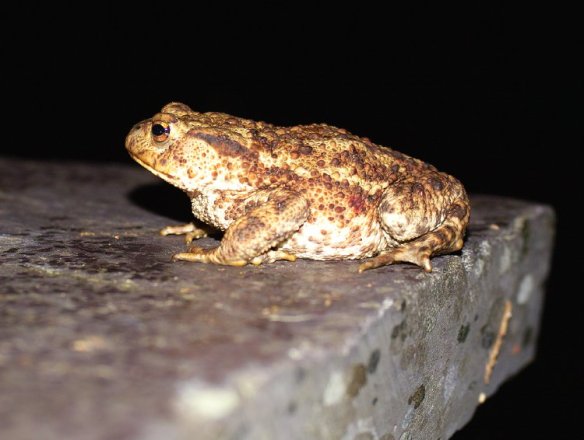 The ‘ruminating’ toad on the top of the longborder wall. Of course toads don’t have a rumen, but it was definitely chewing something over, for quite some time. 20/09/11

It kept this up for over quarter of an hour allowing me lots of opportunities to photograph it, but the strange thing was its position on the corner of a slate slab which caps a metre high stone wall outside our front door. 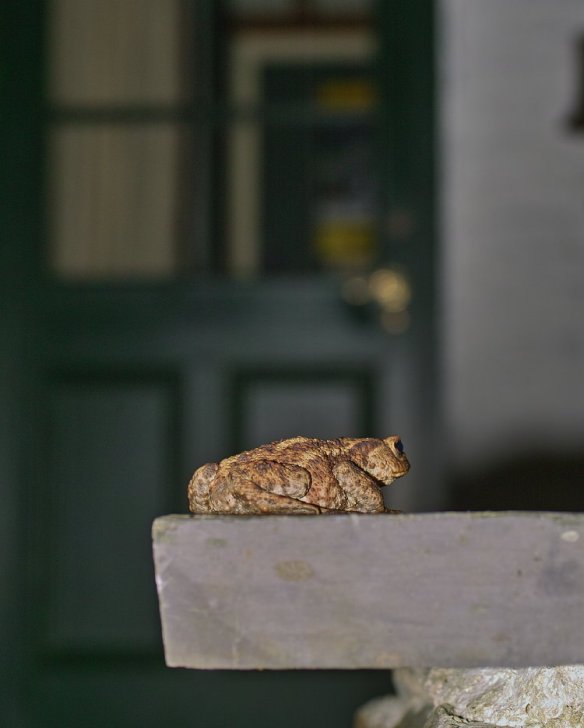 How did it get up there? Climb, jump or other?

How did it get up there? Did it jump, or did it climb? The slate capping overhangs the wall by a couple of inches or so along its entire length. Toads can clearly jump, though their hind legs aren’t as powerful as frogs. Eventually as I moved ever closer with my macro lens, it disappeared from view, and so I guess jumped down off the wall. Still after a chat with the head gardener from the Llanerchaeron National Trust estate last week, I suppose we should be grateful that we only have jumping or climbing toads, and not rabbits. In the walled garden on the estate, rabbits have been seen climbing high into the apple trees, eating the fruit, and chewing through the bark. The Gelli rabbit has also reappeared within the last 10 days, albeit fleetingly. I suspect a rabbit live trap over the winter months is the answer, which is how they eventually resolved issues at Llanerchaeron.

A cancelled garden visit because of more rain on Saturday made me start to clear one of our compost heaps. Since we now generate more compost than we use in a year (a fortunate situation to be in, and largely the result of a maturing garden with ever more foliage which gets cut back at the end of the year) last year’s heap had been moved at least twice into its final bay, and left, well covered with bits of our old living room carpet. This meant that the compost was pretty well-rotted, but a little dry in places. No matter, I started filling up tubs to carry up to another batch of Dumpy Bags which we’re pressing into use for vegetable growing, plant propagation, and overwintering of some plants in pots plunged into the bags. Fortunately, I was using a blunt fork, since after a couple of buckets, I suddenly spotted, just below my fork’s prongs a large sleeping hedgehog. 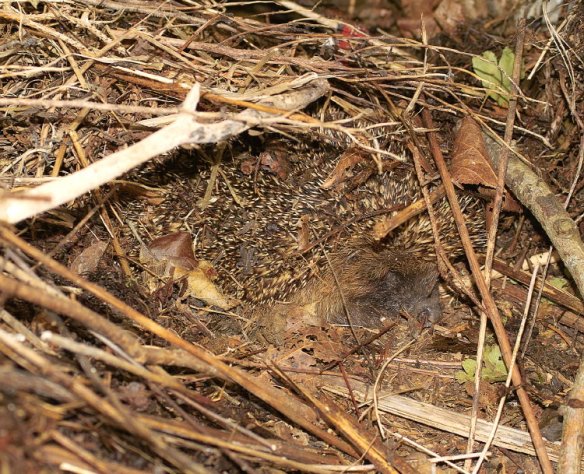 The sleeping adult hedgehog, which I just missed skewering 23/09/11

Reckoning that it was probably a bit too soon for it to be hibernating, I carefully lifted it out on the fork, into another bay, and then returned for some of the dry leaves and twigs/stems to cover it in its new home. I couldn’t believe it when beneath the removed dry stems were another 4 and possibly 5 hoglets, all of a decent size. 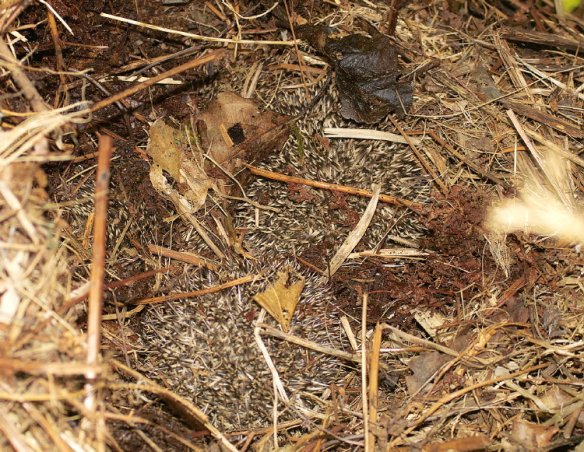 By coincidence, we’d had to avoid 2 hedgehogs on the road on the other side of the valley a couple of nights previously when we’d been returning home from Lampeter.  Hedgehogs will travel up to 3 km per night so it’s even possible, though unlikely, that they were the same ones we found in the compost. But it is encouraging that after never having seen hedgehogs in our first 14 years down here, we’ve now seen them in the garden in the last 3 years, and in the last 2 have seen hoglets. This at a time when across the UK their numbers have declined by over 50%. The best advice in similar circumstances is to leave them alone and not to touch them with bare hands, since the mother can behave aggressively towards the young after such an episode, or just abandon them. It’s likely that the hoglets are a second brood, since the first litter is usually born in June, and with any luck given a mild spell just now they should be able to put on sufficient weight to be able to hibernate successfully. Let’s hope so, since the talk in town this week is the forecast of snow arriving by October this year, and then another long hard winter ahead.

Having replaced the mother back with the hoglets, I’ve covered them again as they were, but will also now incorporate a simple hedgehog ‘nesting quarters’ at the base of each compost bay as I clear it, so that hopefully the risk of skewering one in future will be significantly reduced.

The final observation presents an insoluble conundrum for which suggestions will be most welcome from anyone reading this. In February we had another 16 tons of road stone dropped in the layby halfway down our track, for ease of track maintenance. With the September rain meaning potholes are starting to re-appear, I had a session on the track last week, shovelling stone into whitewash tubs and filling in the potholes. But with one plunge into the side of the stone heap, the shovel came away with what looked like a hen’s egg, split by the shovel’s edge and oozing clear egg ‘white’ and yolk into the rest of the pile of stone. 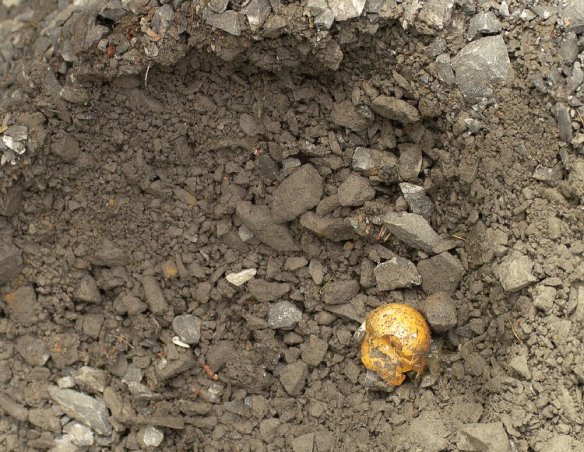 The mystery egg. Suggestions or eggsplanations as to how it got into the middle of the pile of road stone would be most welcome.22/09/11

But how did it get there? How long had it been there? If it arrived with the load of stone, how did it survive being tipped out? Or loaded in? If it didn’t arrive in the stone on the lorry, how did it come to be at least 8 inches below the surface of the pile? How long will an egg survive out of a hen before the contents completely decay, or the egg decomposes? Any suggestions, humorous or otherwise, gratefully received. When researching ‘jumping in toads’ on-line to try to explain finding frogs and toads in implausible locations other questioners were rewarded with such gems as ‘Pole vault?’ and ‘Parachuted down from the tree?’ 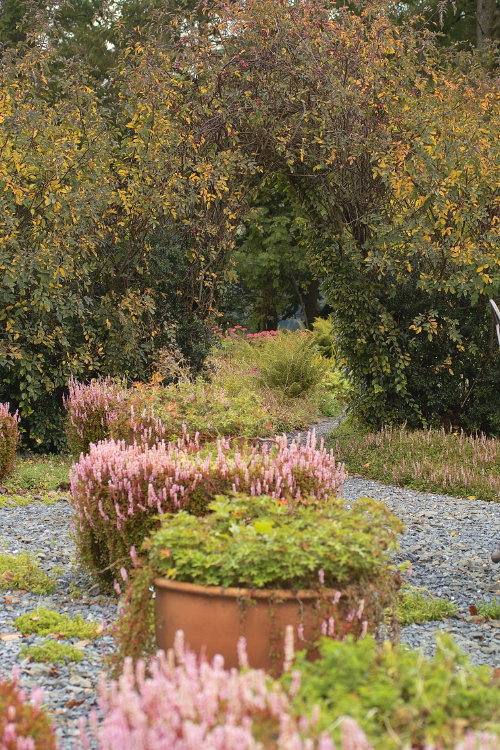 In all the gloomy weather not many photo opportunities, but the pink spikes of Persicaria vaccinifolia really shine out even in poor light and are loved by many insects 19/09/11 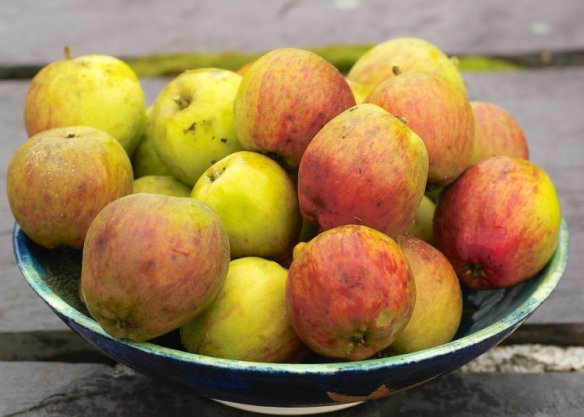 In spite of the weather the apples still need picking. This is dessert apple ‘Cissy’ 18/09/11 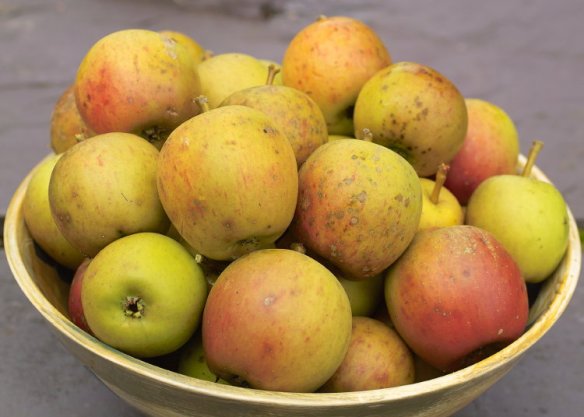 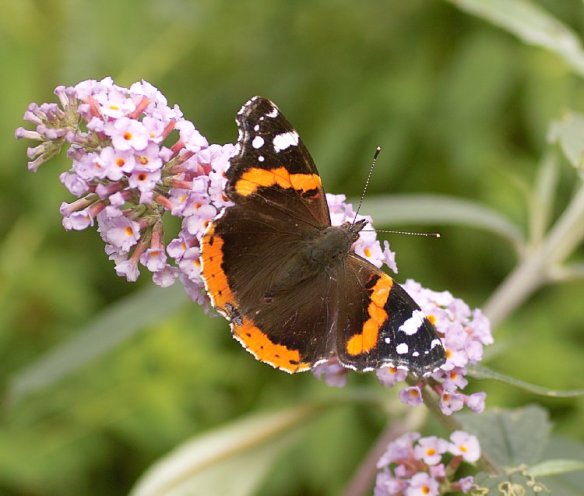 A few butterflies have hung on through the wind, rain and gloom of mid September, and this Buddleja which is of unkown origin and may be a garden seedling, has given a good second flush of flowers after deadheading in a pretty pale lilac pink. I’ve taken lots of cuttings from it this year 22/09/11 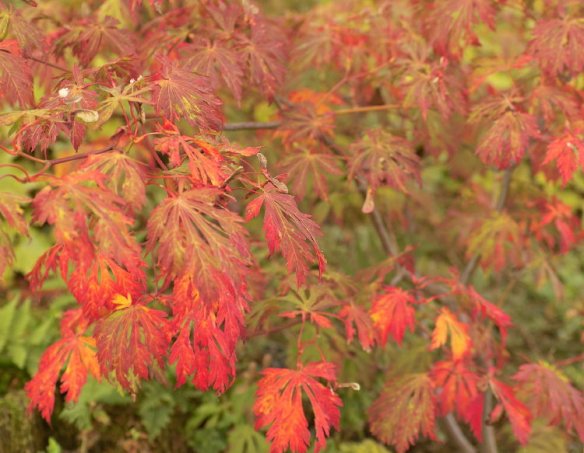 Acer aconitifolium is always one of the first plants to show fiery autumn colour in our copse, 19/09/11 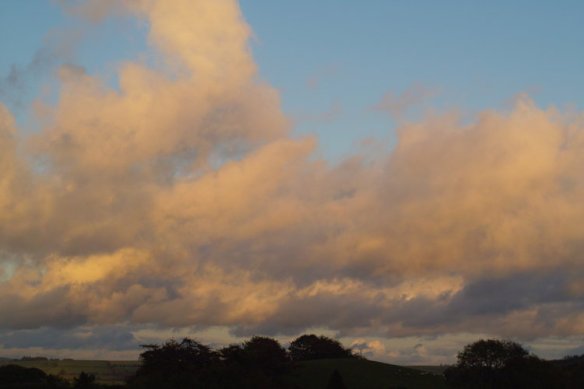 On a few days over the last gloomy week, the skies have cleared just before dusk to generate some wonderful vistas 24/09/11

2 thoughts on “Blink and You’ll Miss it, Let Sleeping Hogs Lie and the Mystery of the Egg in the Stone”