Along with Crocosmia, Sedum and  Japanese Anemones, its increasingly the Asters which I really look forward to seeing  flower as we get into mid September. I’m a fairly new convert to their prolific autumnal show, and by chance we seem to have created a suitable environment for them in our smashed concrete and shale based terrace garden.

We tried them in our much drier previous garden in Bristol, and nearly every year had to contend with sorry, mildew affected plants. Here with the regular more than soft Welsh rain, they seem to thrive. Sadly an all too common lapse of efficiency means that I’m uncertain of many of the varietal names. 2 years ago we stopped off on the way back from a September Oxford wedding at the wonderful Aster specialist nursery in Colwall at the foot of the Malverns, and were smitten by the display of huge swathes of healthy plants in butterfly studded drifts. Bringing them back to Wales, I did what is now a normal routine for new perennials. I bulk them up and get them growing well in proper Welsh soil for a year in a tyre, and then (hopefully) have a bigger plant which in many cases can be divided and planted out into the final garden position the following autumn. 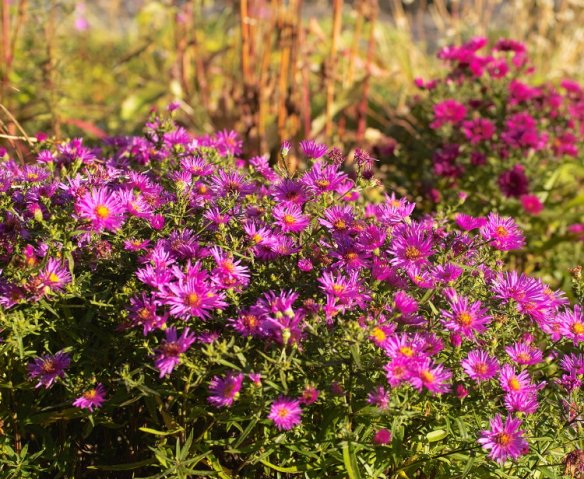 This happened last year, and it’s always a wrench, since you butcher a plant in full flower (in the case of an autumnal flowering plant like Aster).But this year the display should be pretty good, though a few more years of occasional lifting/splitting will be required to produce really spectacular displays. But I do love the colour palette of these plants which matches the wonderful September light and first hints of autumn leaf colour change, on a sunny day. And, of course they’re great late season nectar flowers for many insects -flies, bees, bumblebees, butterflies and moths. 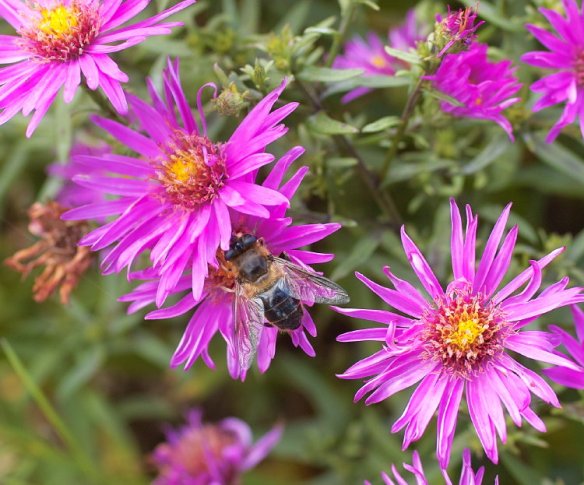 They usually keep going well into October, and this year I executed a ‘Chelsea Chop’ on some of the taller varieties in about mid May with the hope of spreading the flowering period and also avoiding the need to stake them. So far its working and they’re standing up to the autumnal gales pretty well. The knack also seems to be to plant  smaller varieties in front of the taller ones, firstly to provide a bit of shelter, but also to hide the bare stems of the taller ones as they shoot up, just before flowering. Some of the Sedum also got chopped, and I quite like the look of the clipped form, it almost looks like a different variety, and it will flower a couple of weeks later than the untouched plants.

After my comment about the late appearance of Small Tortoiseshell butterflies this year, we’ve had plenty in the garden this last week 12/09/11

The annual Underclass, or at least part of it, arrives in early September. Optimism triumphs over the hard slog of getting them into the ground with a digging bar 5/09/11

In the same area of terrace garden we’ve been engaging in the annual chore of bulb planting. Spotting the gaps/ weak points in the garden in spring, and ordering the bulbs is fine. Putting them in is not, and this year we kicked off with some Pushkinia libanotica and more Scilla tubergeniana which we grew for the first time last year and really liked for its  very early pale blue spikes of flowers. However we planted several hundred of these on a damp day (we, because all bulbs here need planting with a digging bar, so we’ve decided that making it a 2 person job is infinitely easier and less tiring). I rarely wear gloves in the garden, but the following day developed a splitting headache which I suspect might have been from handling so many damp bulbs. So lesson learned, I now wear gloves for bulb planting. But in the terrace garden, it’s always tricky to work out where to put in new bulbs. Photos from the previous spring help, but planting this flowering underclass which will emerge from beneath where now tall or luxuriant foliage covers the ground always is a chore. We now try to stagger the planting over several days/weeks and usually end up with the tulips in October, but this year will aim to get our skates on with the memory of last winter’s early onset fresh in our minds.

September brings 2 other regular, and noticeable seasonal changes in our garden. Firstly the robins start to serenade us quite regularly after summer months of quiet. They have regular spots throughout the garden which they seem to move around in a ritual routine. This makes up for the day, quite soon, when all the swallows will leave us for sunnier winter climes. Some have gone already, and unlike their arrival, you often only pick up their absence after a few days, since the weather isn’t so good now, and they often only appear over the yard towards dusk, after a whole day on the wing. But last week there was a great late afternoon display as they flew low in circuits round the house’s chimney pots silhouetted against a light grey sky – a fast shutter speed freezing an infinite variety of otherwise unseen wing postures as they hurtled through the air. 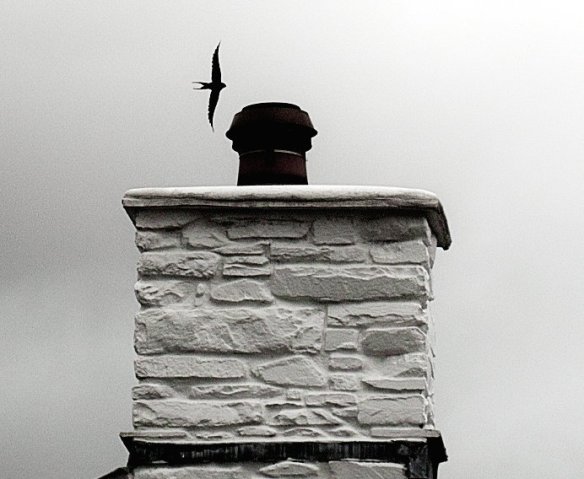 Are they getting excited by the prospect of flying South? Exuberant swallow antics round the chimney

Another loss has opened up a new perspective in the garden. An eighty year old Norway Spruce with a severe lean was felled into our lower field. Over 3 feet at its base, this was beyond the scale of tree work which I’m prepared to tackle, though once on the ground the task of ringing it up will keep me busy for a bit longer. But it does create an opportunity for a new vista at the end of our central fruit garden path. 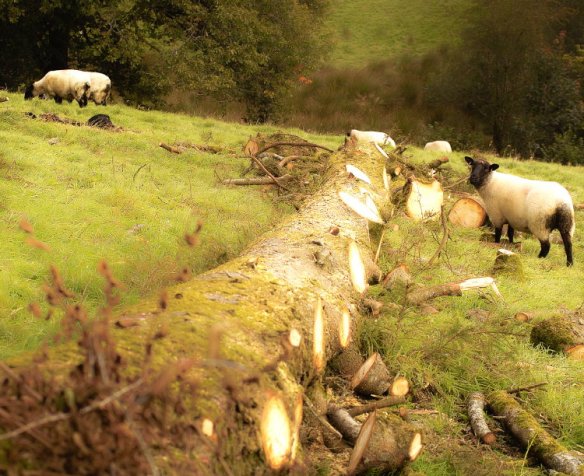 Safely on the ground, and processing begun…..many more hours of work ahead 8/09/11

We’ve had a few group visits round the garden this month, and whilst the weather hasn’t been as nice as everyone would have liked, I always enjoy feed back from visitors. Unfortunately I didn’t have any Japanese Anemone planted up, for a request from one visitor, so took a fork to a large clump. The resulting carnage required a lot of cutting back of flowers and foliage to produce a hopefully viable root and shoots to be carried away in a plastic bag. But the spent flowers looked too attractive to throw on the compost heap straight away, so they ended up in a vase, which 2 days later enabled me take the photo below, which I really like – an interesting tangle of stems, buds, flowers and developing seed heads.

In the same group was an elderly gentleman, who must have had a very keen eye, since he came up to me and commented that I had a Walter A Wood seat on one of our chairs. He remembered sitting on such a seat in his youth, and that it was not from a tractor, as we’d previously thought, but rather a horse-drawn mower. 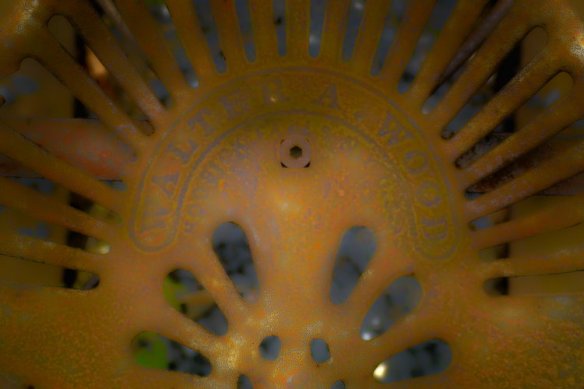 Impressive recognition of this seat coming from Hoosick Falls , U.S.A.

Poor design….no drainage holes for the critical part of the seat

Perhaps the only surviving firm (JCB)

Other seats he said were from horse-drawn hay ricks. Intrigued, I went on-line and eventually found on ebay (where else?) a newspaper advert image of the Walter Wood machine, dating back to 1869.

This is what the gentleman garden visitor remembered riding on ….in West Wales in, I guess, the 1940’s?

The gentleman even remembered that the firm was based in Hoosick Falls in the U.S.A.- quite impressive since the cast iron embossed lettering is now pretty faded. My guess is that Walter Wood survived as a viable business for longer than Pierce – their simpler design of seat does not have sufficient holes to drain away, a prequisite I would have thought in a climate like that of West Wales. But I fear that both are now faded agro-industrial memories unlike the firm of JCB, which as simple ‘Bamford’ was cutting its manufacturing teeth in the same marketplace. 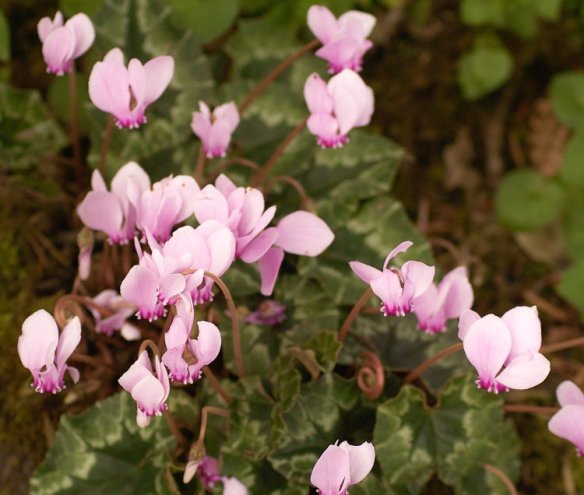 Cyclamen hederifolium are really getting going into full swing, and some of our larger corms which we have moved years ago from our Bristol garden are now decent plate size 10/09/11

I love Hydrangea ‘Preziosa’. At least it stays a strong pink/red in our acid soil, and with autumnal leaf hues is a real stop-you-in-your -tracks plant 10/09/11 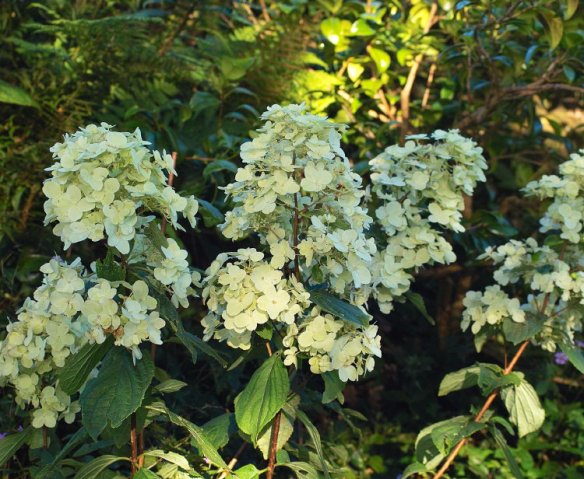 Best ever year with us, and living up to its name, is Hydrangea grandiflora, growing in the shade of our large oak tree – huge panicles of white flowers, which like most panniculata forms will gracefully age to a pinkish hue with time 10/09/11 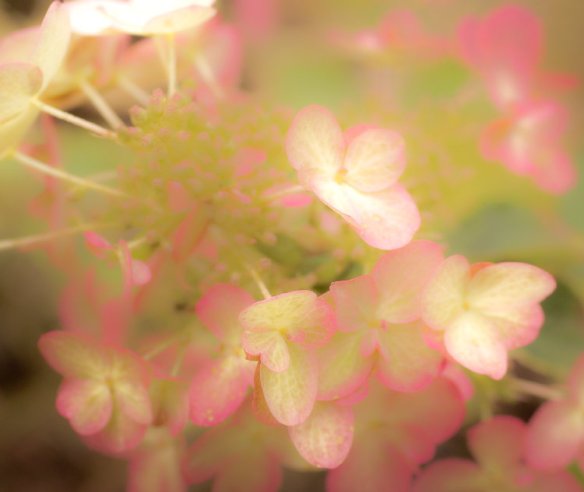 Thanks for reading. And do browse around the rest of the Blog Pages….

Our garden at Gelli Uchaf opens most of the year, when we’re around, by appointment, for charity under the National Garden Scheme. Please see the Garden Overview page for visiting details, or by clicking here.

This blog, our home and garden are created and powered by using our own home generated electricity. When this is insufficient we are backed up by the supply and resources of Good Energy. In a short space of time they have become the UK’s leading supplier to home generators on the FIT scheme, and are unique in the UK in delivering all their competitively priced electricity from renewable sources. For more information about this UK owned and Wiltshire based electricity supply company, click here, or phone the number below :

2 thoughts on “It ‘Aster be September, The Underclass arrives in a Box and Bums on Seats”