Our resilience planning had a pre-Christmas test, when at the height of our flu, we suffered quite a long power outage.

Having basked in the warm glow from our wood pellet stove, and the novelty of automated central heating which we’ve enjoyed since June, such a power outage highlighted the fundamental flaw with any sophisticated system – if the electrons don’t flow, neither does any heat. 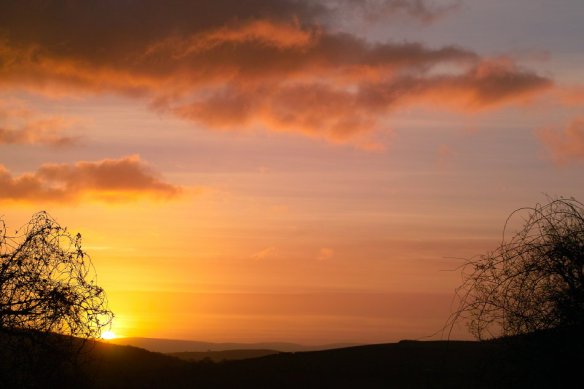 We’d always planned to retain a wood burner, in part because we’ve accumulated big stores of cut logs from around the property, and although never truly “free” fuel, once logged up, at least most of the effort has been completed. But a wood burner is the classic low tech, high resilience heat source. And now encased within stacked heat stones from our old night storage heaters, we’re finding it functions even more efficiently, as well as allowing us to give a final air dry, and preheat, to the logs before burning. Even so, after 3 hours, temperatures in the rest of the house were starting to fall away, as night arrived.

Earlier in the day, and before the power went off, the valley had been filled with jarring, and varying frequency, machinery noise, which we eventually pinned down to a small helicopter, once it emerged from behind our neighbour’s humped ‘cae castell’ hill.

This Welsh winter hornet then buzzed up and down the valley, and once close enough to us to discern the colour, and logo, it was plain that it was monitoring the electricity cables.

We’ve seen this over the years, as a means of assessing the risk of constantly growing trees affecting above ground cables, but this seemed altogether more frenetic activity, and indeed it was apparently an attempt to locate a “problem” in the local overhead high voltage network, heralded the previous day by a transient power failure.

I’d not witnessed such low-level helicopter pilot skills before, and it was with some relief that the chopper eventually left the valley safely, and to the more appropriate and benign sounds of mewing buzzards. 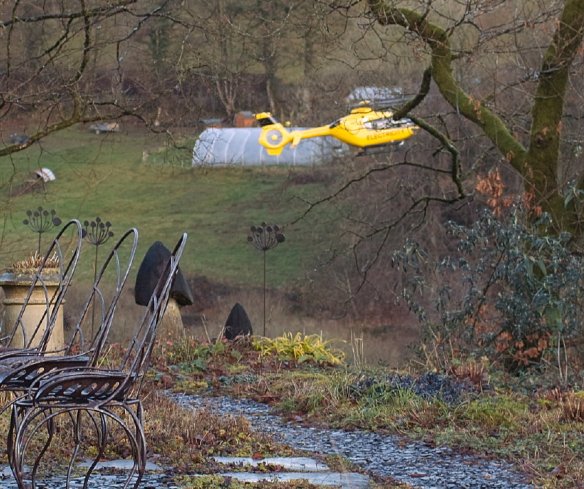 Later in the evening, lights back on, we even had two courtesy calls from Western Power distribution, who manage our supply network, to apologise for the delay in service restoration. Frankly, I was hugely impressed that they got the work prioritised and carried out before the second of the Met Office named winter storms ” Barbara”, blasted in on December 23rd.

Contrast this with our communications company issues last winter. At least in power provision, we are first class. 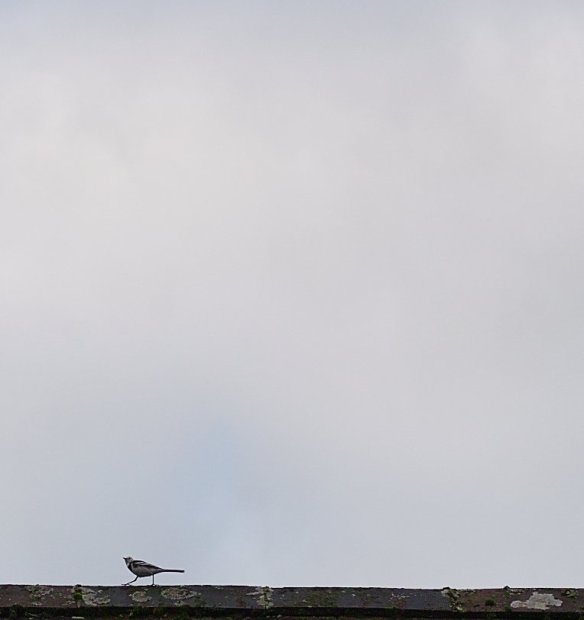 Pied wagtails, Motacilla alba yarrellii, have been in evidence again recently, always early harbingers of spring and the new breeding season. For the first half of the year, they are constant companions around the buildings and yard, both dapper and dippy, in their monochrome suits. Then once past midsummer, they seem to take their leave and disappear into the leafy landscape, chicks fledged and self-sufficient. 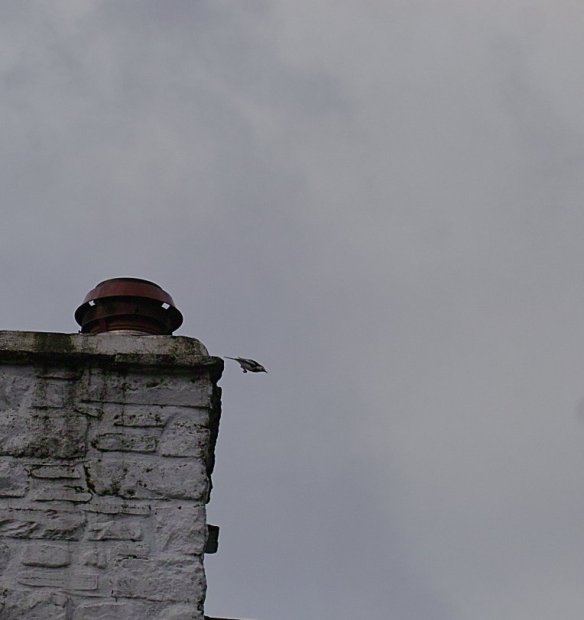 It was a real delight to have one back, and ridge lining, with its jaunty, bobbing above the slates, activity, before nipping onto the chimneys for a better view of the terrain. I’d always thought that this was all it was, but perhaps it’s a more complex state of affairs. After having one dive off the roof and fly almost directly over my head, in one of its characteristic dipping, looping flights, and suddenly coming up short, mid-air in a vertical pirouette, I reflexly swung the camera up and shutter pressed in a single motion.

Back inside, it seems clear that this oddly un-aerodynamic bird, was homing in, eagle eyed on a small insect, presumably spied from its roof top vantage point. So maybe perching on a slightly warmer and higher object, in the form of our slated roofs, is a real boon for spotting the few insects active and on the wing at this chilly time of the year?

No such luck though with photographing wrens, though they are a constant presence in the garden, heard if not seen, and courtesy of disrupted sleep we caught a repeat of an excellent BBC Radio 4 Living World programme, early on Christmas Day morning, on aspects of wren behaviour and ecology. Click here to listen. The piece began with the information that for millenia, the wren has been known across many civilisations and cultures, as the king of the birds. In part because legend has it that in a competition to find which bird could fly the highest, the eagle looked like triumphing, until beneath its feathers a tiny wren emerged at the last moment, and flew just that little bit higher.

But of its natural history and ecology, little is known, and no book has yet been written about this ancient bird’s life history and behaviour, with the cave dwelling scientific name of Troglodytes troglodytes, hinting at its preference for dark places.

However, if you listen to this programme, you’ll discover many interesting wren facts – they’re birds of the lowest 10 feet of vegetation in our woods and gardens. They are very territorial, and surprisingly long lived for such tiny birds (up to 7 or 8 years). And the males are supremely skilled, nest builders, constructing perhaps a dozen dome shaped mossy refuges around their territory. How does it do all this with just a tiny beak and claws?

It is with such cock nests, that the male wren seeks to attract a mate, or even several mates, and indeed female wrens seem to select mates on precisely this nest building prowess, rather than any other physical attribute. So some successful wrens will father multiple broods, whereas if a male’s nest building doesn’t come up to the required female wren’s des. res. standard, the male will be left, partner-less. And this year, for the first time, as the leaves fell from the Rosa moyesii, one of these cock nests became obvious in the garden. Though not apparently used for rearing any young, since there were no feathers in it, so whilst it looks pretty impressive to me, perhaps the female wren felt it just a little exposed.

I’ve written before about my previous wren close encounters, in September 2011 (click here). In particular, the memorable occasion when a wren flew towards me and very briefly landed on my hand, at dusk on Epiphany, Twelfth Night. Amazingly this was the very day that wren hunts took place centuries ago in the Welsh hills. Indeed this remembered scene created the opening shot of my film “Epiphany In Translation”, in 2010/2011. And the photo below, is of a wren which had found its way inside Gelli Uchaf, in September 2011.

But in a further trawl for information, I discovered that a complete book has been written on the history of wrens, in many cultures, down the ages.  Click here for more on “Hunting the Wren – Transformation of Bird to Symbol”, by Elizabeth Atwood Lawrence. Not a book to buy, perhaps, but maybe one to try to obtain from a library. 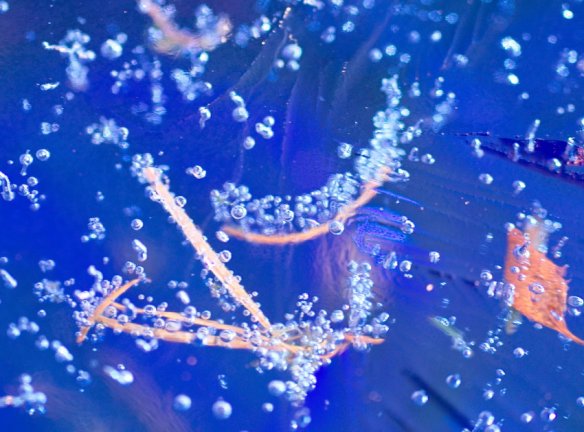 The other silver lining from our enforced inactivity, was a new musical discovery, courtesy of the excellent ‘Something Remembered’ programme from BBC Radio 4, also early on Christmas morning. How did we get to our not so tender years, without previously hearing the beautiful opening piece from Handel’s cantata, “Ode to the Birthday of Queen Anne”- ‘Eternal Source of Light Divine’? Click below for this fabulous duet between contralto voice and solo trumpet, beautiful in its simplicity, and perfectly matching this Christmas season. 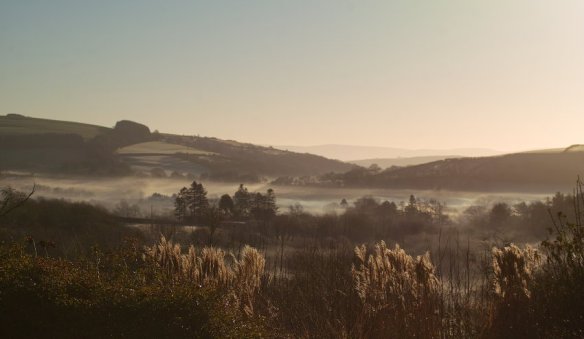 As I write this on December 28th, 21 of our different snowdrops are ‘out’. Quite what constitutes being ‘out’ is debatable, where snowdrops are concerned. Galanthus ‘Mrs. Macnamara’ below, is certainly there in early frost tolerant numbers. 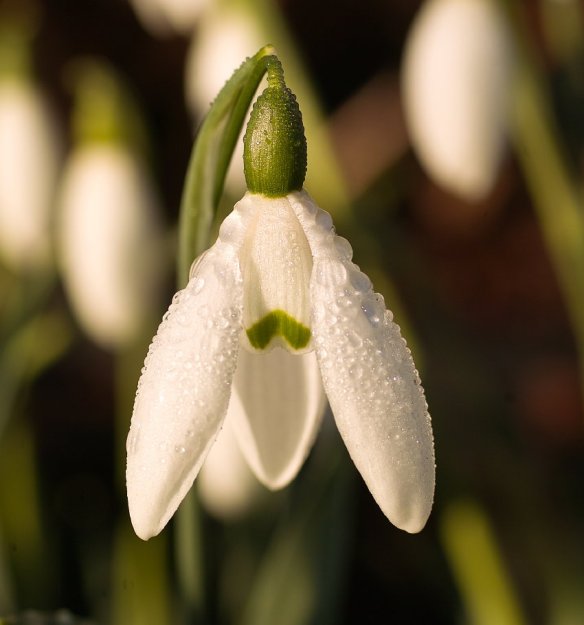 I choose the ‘open’ point as that at which the flower bud is clear of the spathe, and pointing downwards, as with G. ‘Long Drop’, below. 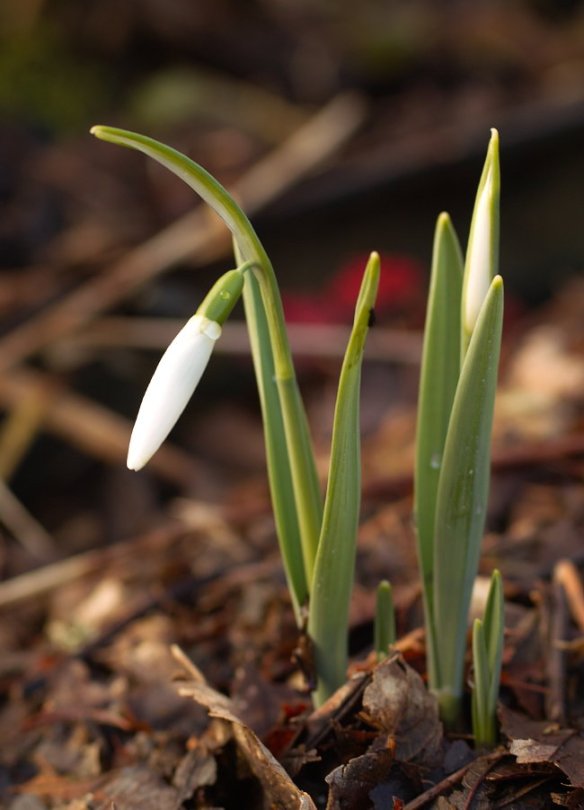 It may take several more days and, in particular, warmer conditions for the flower to ‘open’ fully, but it’s the excitement of seeing these first snowdrops, at this time of the year, which is always special. G. ‘Florence Baker’, a slightly laxer, but again very early form, below. 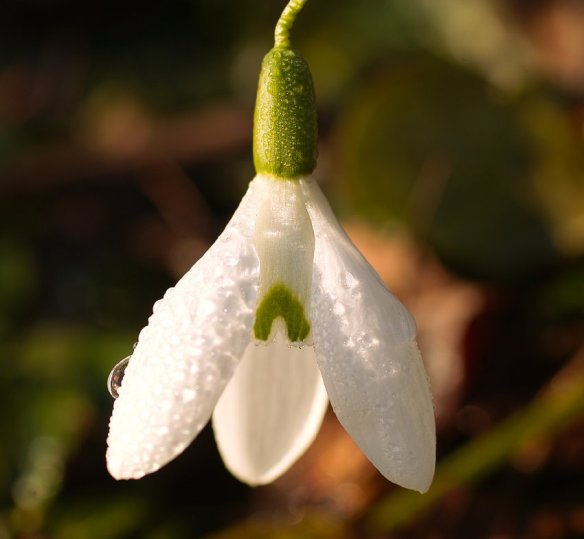 This year, prompted by a very timely post by my American fellow galanthophile and blogger, Carolyn Walker, on the need to properly record, label and curate a collection of plants, I’m undertaking this serious and time-consuming task. The lovely yellow tinged G. ‘Sutton Courtenay’. 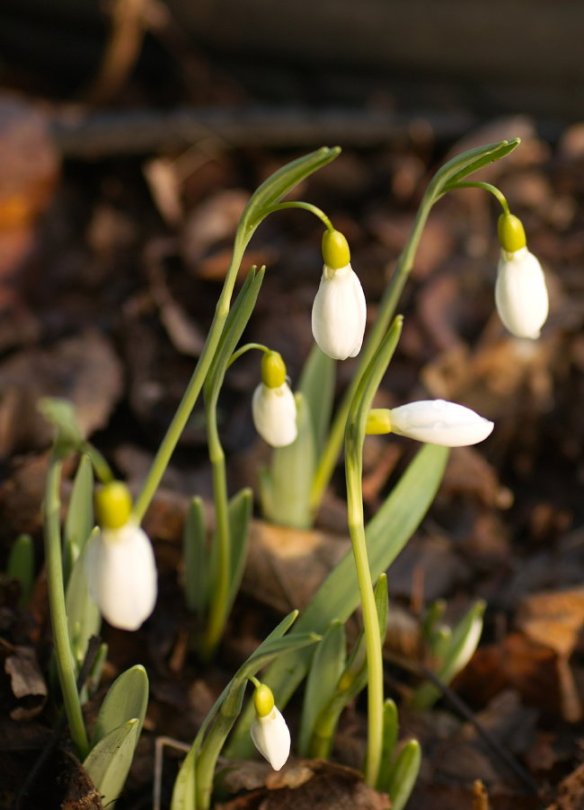 Well worth reading Carolyn’s piece. Click here. Nothing will appear on line yet concerning our snowdrops – simply photographing nearly 250 forms is job enough in itself, given the vagaries of the weather. The very upright early form of G. ‘Reverend Hailstone’.

But we’ve sourced labels we like, and I’m revamping my computer and physical record base. This may well mean other blog posts take a bit of a back seat until the middle of March, when the numbers flowering tails off. Maybe next autumn, I’ll have the time to upload it all. Simple name, simple flowers, G. ‘Bess’.

For anyone still to be convinced about the wisdom of acquiring named snowdrops, have a look in your gardens now, and see whether you have any bulbs in bloom yet. No? Well do think of getting one or two – if you choose a vigorous early form like ‘Mrs Macnamara’, a single bulb can miraculously become 60 plus in 6 or 7 years – a great return on what seems like quite a bit of money for that initial single bulb. G. ‘melvillei’ below.

The sooner you start, the quicker they’ll multiply! A bit like the equally gorgeous Cyclamen coum, though these are seed propagated jewels, carpeting the slope beneath our big oak in a Christmas display.

Which along with Hamamelis ‘Vesna’ and ‘Robert’, glow in any of the wonderful early morning sunlight we’ve enjoyed recently. 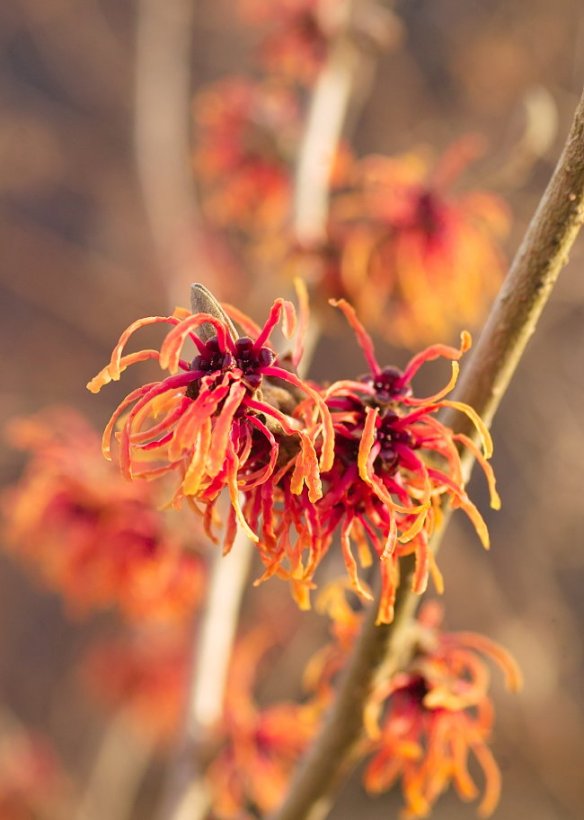 I’m sure I shan’t write again in 2016, so Happy New Year, to all who read this before January 1st. 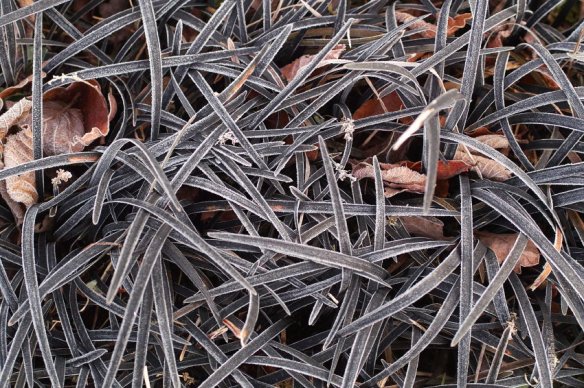 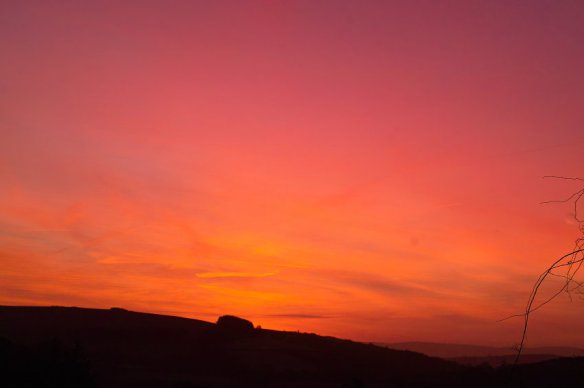