Sensational Sunday completely passed us by in a blur of forks and rakes. For the fifth and last time this year, I opened the back door to the smell of half dried hay this week. A wonderful scent to be savoured, flavoured, before the dew lifts and manual fluffing or turning begins. Heard of Seedlip? Click here for more. As a nearly full-time teetotaller, I wonder what a distillate of a Welsh hay field would taste like? Could you capture this essence of summer in a glass? And enjoy it? 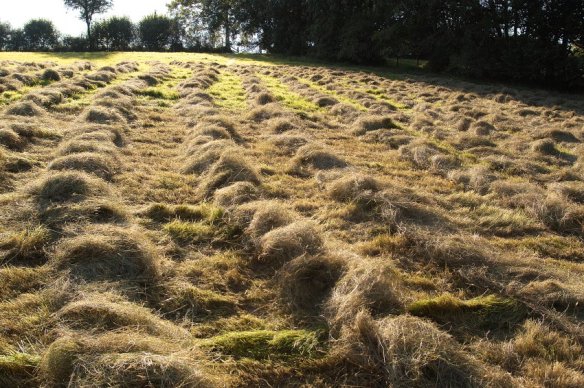 So whilst most of the country would have been glued to their devices following the triumphs of Murray, Rode, Whtitlock and Dempsey in Rio, we struggled under windless gloom, trying to undo the damage of an unexpected 4 mm of rain on the final tranche of cut grass. (By the way, how strange that the exploits of Team Great Britain, currently still second in the Olympic medal tables, are celebrated without a thought, whilst the concept of our unusual union of four nations ever again managing to survive and thrive in a post Brexit world, still seems to preoccupy much of the nation’s media).

Whilst admiring the colours lurking in the sodden mossy surface – Pink, or Ballerina, waxcaps, Hygrocybe calyptriformis. 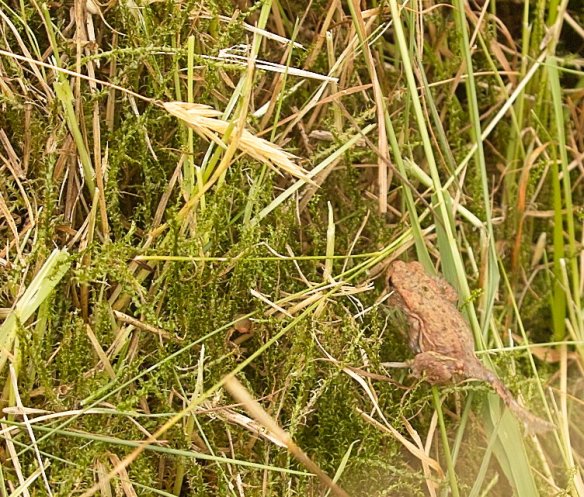 The tiny, and adult, toads and frogs; the dueting, echoing, unseen hedgerow redstarts, Phoenicurus phoenicurus; and disturbed, but placid, Common carder bee, Bombus pascuorum. Struggling to relocate their tiny nest entrance hole, once the familiar terrain of guarding stems and leaves were carelessly, and unwittingly, shorn by the power scythe’s shearing blades.

Gingery pasture nesting bumbles, which with their carding expertise, had picked the warmest, driest spot in the hay meadow to construct their combed mossy nests at the base of the South facing slope. 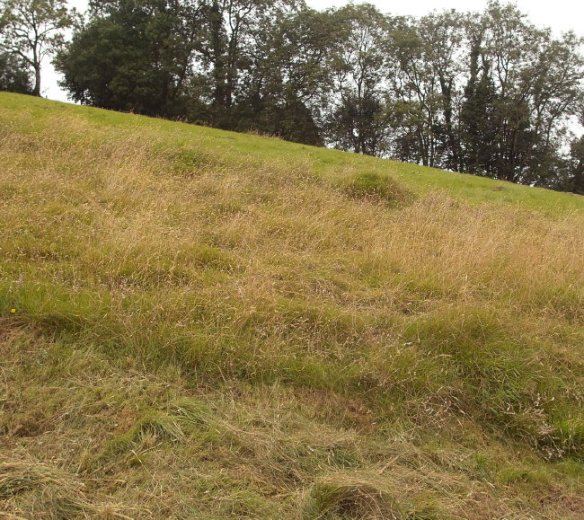 I left clusters confused at dusk, but fortunately by dawn, order was restored, holes had been found, and with a quick recheck of bearings after emerging from the nests, their hard work of food collection could begin again in earnest.

Then on Monday morning, the real delight for all of a sunny, blue sky morning, and even better the promise of two days of high temperatures, to finish the job and get the hay off the field and undercover. Increased mechanisation is planned for next year – creaky joints demand it, and after I wrote this, Fiona’s work induced tendonitis, confirmed the need for such change.

But with this mechanisation, will awareness of what’s going on within the meadow not diminish just a little? 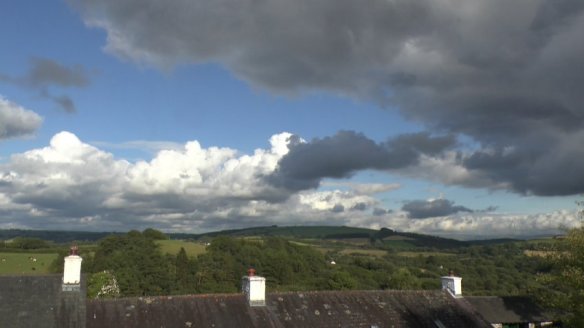 A few days earlier, our wedding anniversary had us thinking about a day away from toil – in the end a scarf restocking request from Etcetera in St David’s gave us the perfect solution. So an early start to avoid the worst traffic and then the lovely drive down to the pretty and tiny city at the most Southwestern tip of Wales, appropriately the scene of our first ever student holiday together.

Scarves supplied, on we went for a coffee in the visitor centre, where once the camper van was parked up, in a deserted car park all those years ago. There, a few smoke-stained pottery swifts were spied, in the gallery shop. Click below for a short video which Elly Morgan and her father Peter, (who has written a book on these iconic birds, whose numbers have fallen by over 50% in the last 10 years), have produced, along with their exhibition. Unfortunately, I have no images of what was clearly a stunning physical exhibition, which had sadly, been taken down when we visited.

A few of Elly’s smoke fired birds proved perfect for our water stain-spattered gable wall, and once hung, seem happy in their new home beside the swallows.

Sadly, we never hear swifts in the valleys here anymore, and this year the swallows have been less successful than usual. Whether the neighbours’ marauding cats have scared them, or they have suffered from food shortages in the gloomy weather, I’m not sure. But we’ve been restricted to occasional dusk gatherings around the yard, when attempts to fly into the barn between rafter gaps, are practised with considerable skill.

The dressed crab and sewin bought in the St. David’s butchers made the perfect anniversary meal, but we were forced to retreat indoors after this crab salad starter, when swarming ants descended, on the table, seeming to prefer light surfaces. Why?

I don’t think these were the yellow meadow ants I’ve written about before, but their darker cousins. Usually timed for the end of July, they’re late taking to the skies again, reflects the strangeness of much of this summer here – Warmish. Cloudy. But Dry. An unusual combination.

Common lizards, Zootoca vivipara, are now spotted so frequently around the garden, that I no longer rush for a camera when one is glimpsed, and they seem less fazed by me, so when I do decide to photograph them, they are usually very obliging. But two merited recording this year. The first on the slate topped wall outside the front door, a favourite heat store, had obviously lost its tail a little earlier and was successfully regrowing a new version.

Whilst the rusty chicken must be another favourite warm haven, since the mature lizard seen here last year, was replaced this month by a darker, and smaller juvenile.

Knowing that lizards are great creatures of habit makes it easy to point them out to visitors – as happened last week when we were really fortunate that a group of naturalists visited Gelli Uchaf to “bioblitz” the property. Organised by Kate Smith, from the West Wales Biodiversity Information Centre (WWBIC – click here for more), and including Richard Pryce, the county’s plant recorder, and Dave Bannister the county’s butterfly recorder, the brief was to survey the property’s 11 acres and record any species of plants and animals found. 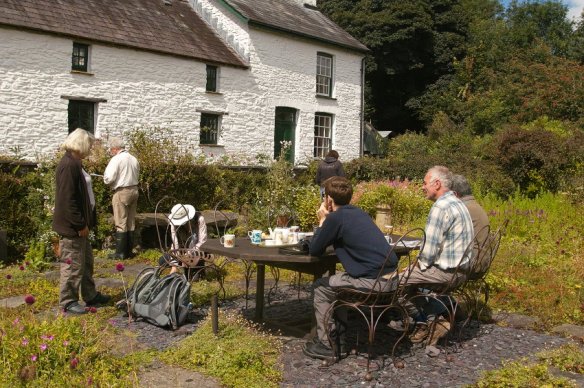 Fortunately we had a dry and part sunny day, and it was a most enjoyable occasion, during which a number of interesting finds were made. Richard has a well honed, thorough, approach including clip boards, GPS to record with accuracy any finds made, and an aerial photo of the location to work from. Lunch was taken, by some, on the hoof in the fields, but there was enough time for tea and cake on the terrace – and to see the basking young lizard.

Richard’s knowledge is immense and working as a team with his wife Kath, it was amazing what they found, much of which I’d never noticed before. In the end he produced 24 pages of notes, which will in due course be typed up, so perhaps more detail in the future.

It was pleasing for me to find a Broad-leaved helleborine, Epipactis helleborine, lurking beneath mature hazel trees on a North boundary bank of our hay meadow.

We’d found a plant here 2 years ago, but not seen it last year. Richard explained that this semi-shaded location was typical habitat for helleborines, and it reinforces the benefits of leaving uncut edges to hay fields.

As an example of Richard’s thoroughness, in surveying many different areas,

in a single 15 yard section of one of the lower meadow ditches, he found finding 5 different plant species, which I’d never even noticed before, including Bulbous rush, Juncus bulbosus, below. 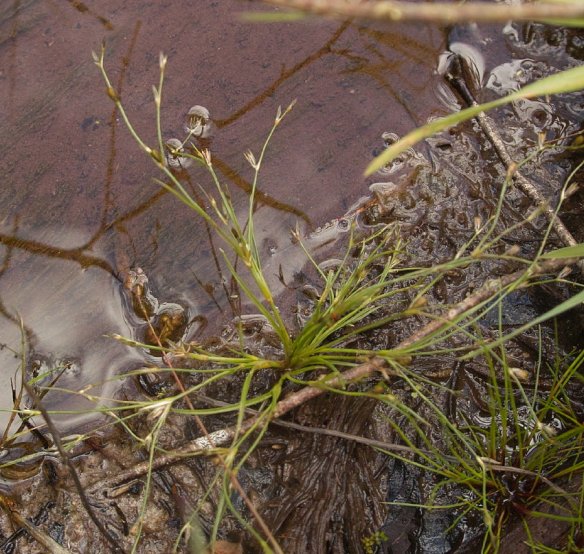 A significant highlight was Richard fishing out on the end of Colin’s walking stick, a glutinous mass of what I would have assumed was just algal gloop, from one of our meadow’s ponds and declaring that it was quite an unusual insectivorous plant called Lesser bladderwort, Utricularia minor.  Apparently there are only 3 (post 2000) records of this plant in Carmarthenshire, so it’s nice to see that it’s colonised a pond which we had dug out about 15 years ago, presumably brought in by an itinerant bird or mammal. 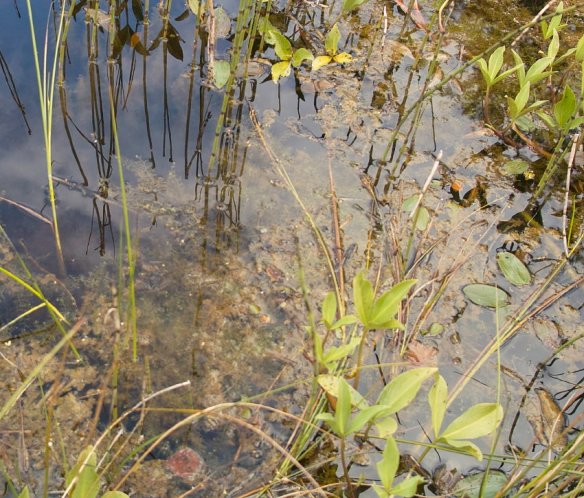 A little bit of research reveals that these are highly adapted plants which use the small ‘bladders’ formed along the stems as traps for catching water invertebrates, which are then digested as a supplementary nutrient source for the plant. 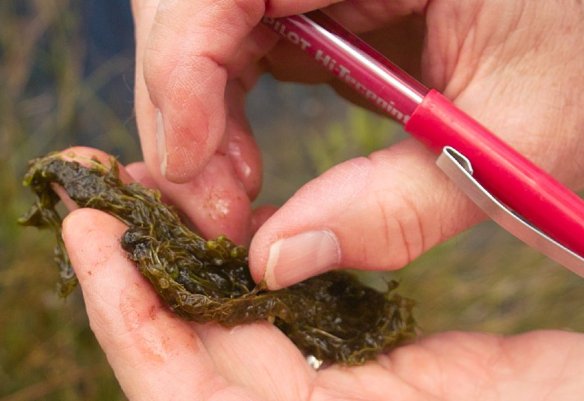 What’s more, the genus ranks as one of the fastest moving plants in the whole plant kingdom. Click here for more, including a video, below, where you can watch the trap concept in operation.

Apparently once the unfortunate invertebrate touches the trip hairs at the mouth of the bladder, visible on my last photo of the plant, the pent up energy in the flexed bladder wall is released, the wall bends outwards, 100 times faster than a shutting Venus flytrap, and consequently sucks water, and the prey, into the now enlarging bladder. Cleaned up and free of the attached algae, the bladders become a bit more obvious when viewed from above.

This process of bladder filling creates turbulence, which prevents the animal from making a speedy exit. Meanwhile, the plant produces a special mucilage-based plug at the bladder’s entrance, sealing off any route of escape.

An individual trap can be re used many times over, and at the end of the year has a role in sinking the floating plant to the base of the pond to escape winter freeze ups. It does flower as well, so next year, I shall be on the look-out for these small yellow structures.

Richard also found, much to Fiona’s delight, a Lemon-scented fern, Oreopteris limbosperma, growing on one of the lower field banks. A few butterflies, dragonflies and damselflies were also seen, including Common darter dragonflies, Sympetrum striolatum, ovipositing in tandem, dapping abdomen tips onto the pond’s surface, in what what has been a generally poor year here for these insects with the lack of warm sunshine for them to take wing. (A picture of these from a couple of years ago, below.)

I must again say a big thank you to Kate, Colin, Josh, Dave, Richard and Kath for visiting us, for this wonderful survey, and for all the hard work that they put in.

Two days after writing the above, the exposed bumblebee nest had been trashed overnight, probably by a fox or badger, keen to consume the queen’s honeypot and associated larvae. The bees were distraught, if bees can indeed experience such behaviour, but interestingly not at all aggressive to this passive observer.

The latest dozen plants in the Gelli Uchaf plant palette for the last two weeks of July has been added to the separate webpage, and the garden has taken back seat with all this field based interest, but Hydrangeas and Clematis are having another lovely year and wonderful to be able to appreciate at the end of such busy days. 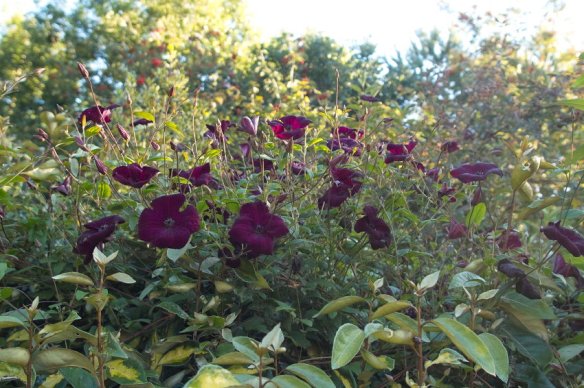 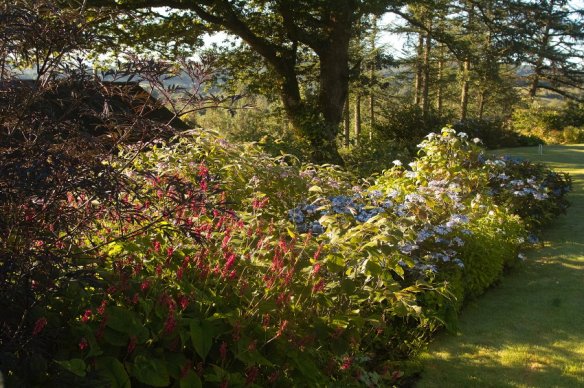 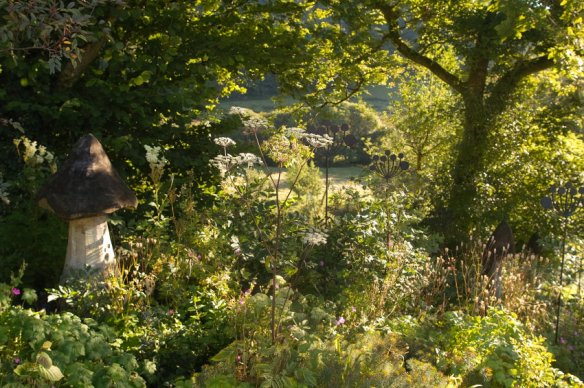 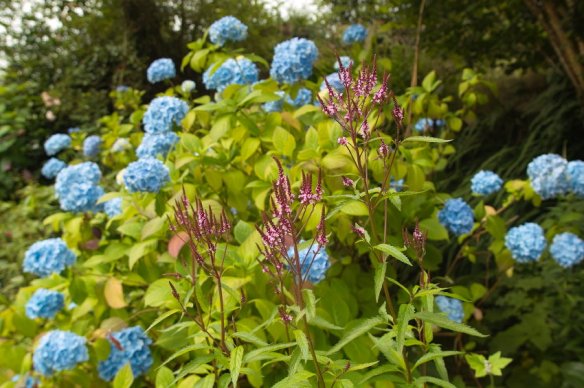 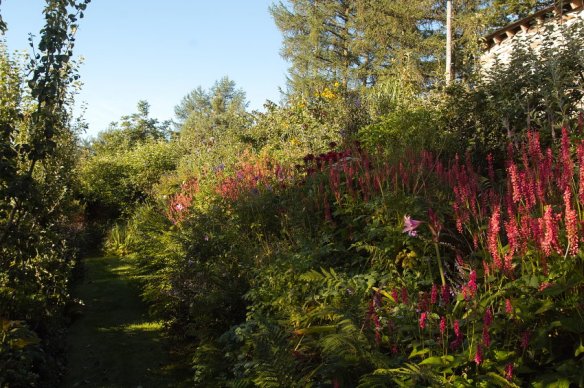 7 thoughts on “Sensational Sunday – Sunny Monday; Anniversary Ants; and The Fastest Moving Plant in the West.”