Do you know what this tree is? And they’re pink leaves, not blossom. Answer later. 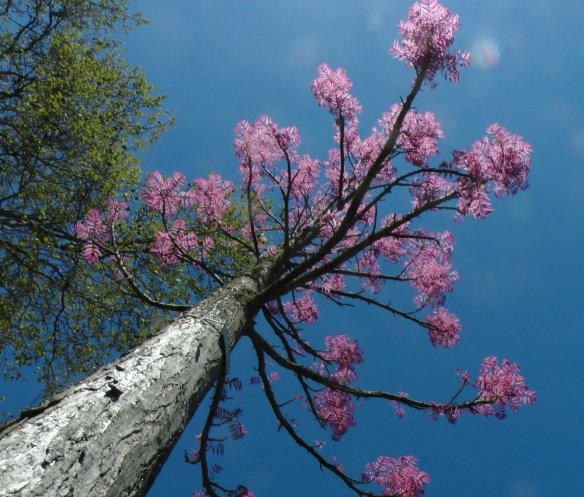 We didn’t, but spied it from afar to the right of the main entrance as we were leaving the Parc de Florale in Paris. This post is a gallop to record images and thoughts before they dissipate into the fog of memory and all clarity is lost.

To have the chance to revisit Paris in early May was a mixed blessing – a wonderful week of weather, as indeed we’d experienced when last there 10 years ago at this time of the year. But we left behind our own garden’s weeds exploding everywhere. Not such a problem in the drier Parisian climate.

The first few days we returned to some of our favourite outdoor places to soak up the unbroken sunshine and rising temperatures. Things were definitely looking up. And I marvelled at the images glimpsed by doing just that. Was this all part of the master plan, when the gardens were laid out decades ago?

Views to make you gaze heavenwards and dream… 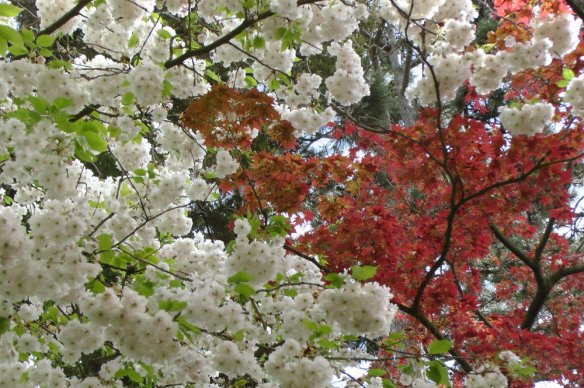 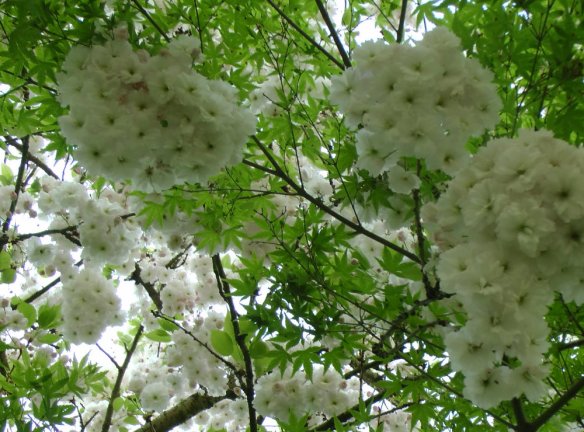 At the Jardin de Albert Kahn, almost every view is a study in consummate design and planting skill. And currently a bargain at 4 euros entrance, even allowing for current building works. (Or as happened in our case, and I realised too late after my very poor French slowly picked up on “….soixante cinque….”., an even greater bargain for OAP’s. A first for us, but clearly the cashier thought we merited the pensioner’s rate.) 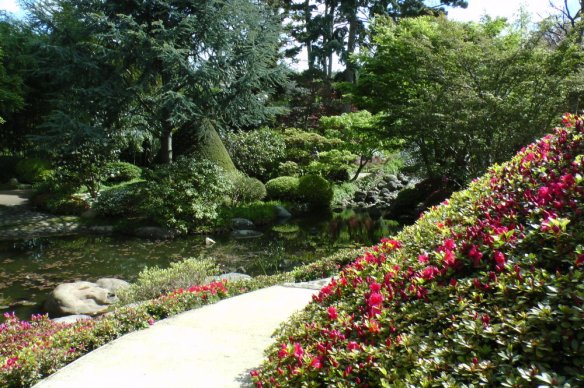 A stroll through the Parc de Andre Citroen and lunch on the way back captured equally great, though more contemporary, designs… 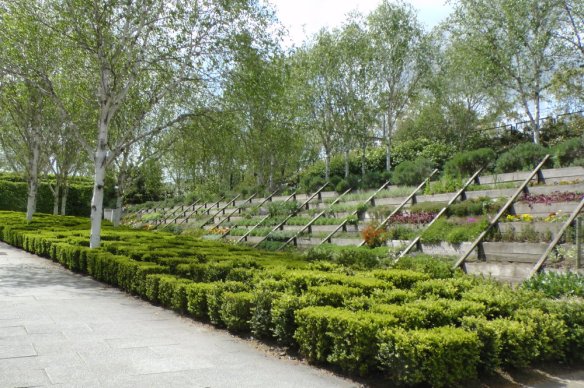 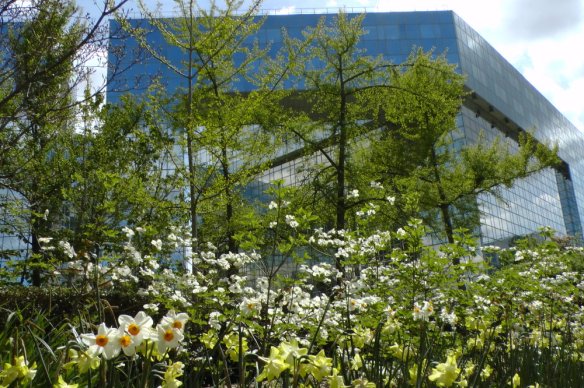 The huge water features, fountains and rills were largely drained, butyl liners ripped with Buddleia growing through – as with many gardens, some great ideas and available funding to set them up, but what happens with the passage of time, when the attrition of entropy takes hold on the maturing scene, and the initial enthusiasm for creating this urban green lung from a disused car factory has waned? 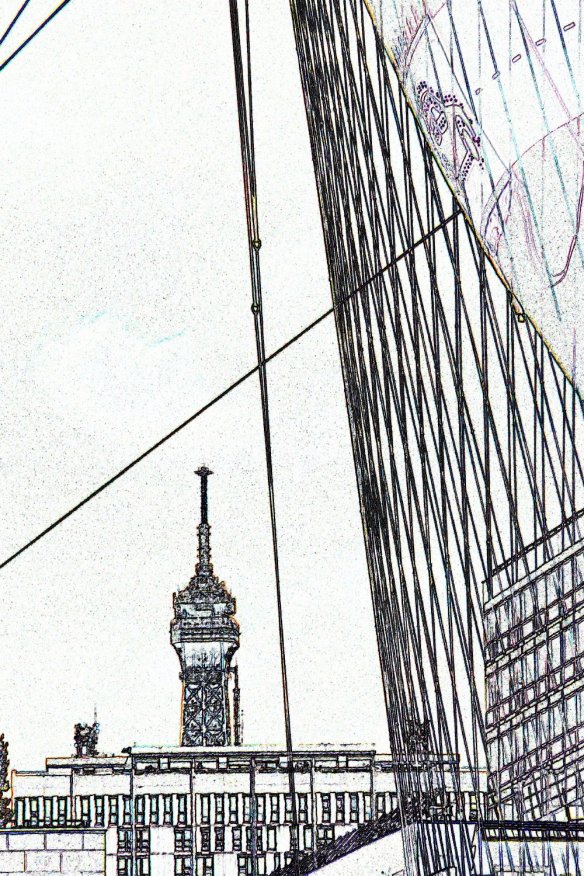 How much longer before the giant Mairie de Paris balloon tethered at the Parc’s centre deflates, or blows away, and up, up, above the nearby Eifel Tower? Many of the restaurants said that their turnover was still 30% down on what they’d expect, following the 13/11/2015 terrorism, and the streets were indeed noticeably quieter.

We even watched from our window seat in the excellent Bistrotters restaurant, 2 different street walkers in the space of an hour, canabilise an old discarded computer server – 1 for the hard drive, 1 for a metal side panel.

Never leave home without a screwdriver in your pocket in Paris, 2016, eh?

Even the fabulous busking harpist, Romain Jermande, in the cloister corner of the Place des Vosges didn’t have a CD to sell of his extensive and largely self arranged repertoire, carefully typed up, listed and taped to the honeyed limestone wall. Few stood and lingered, but Click here to listen to a clip of his intense and delightful music making which Fiona captured on her Mobile phone…

More looking up at the Parc de Bagatelle.

Anyone know what this small tree is? Clearly a magnet for honeybees, but sadly no label on it. A brisk walk to reach this Parc, through the Bois de Boulogne, (taking care not to glance into the parked up, clapped out White vans, with scarves wrapped around the wing mirror, indicating that the buxom female driver was available), this huge park was again quite empty of visitors, to appreciate the daisy lawns … 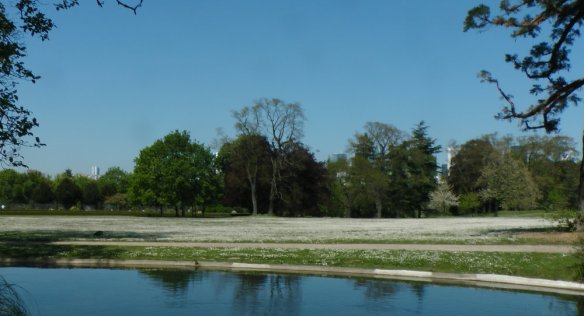 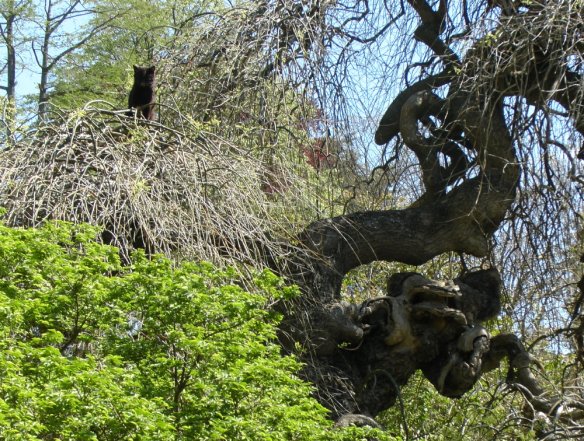 An inscrutable senile black cat was so immobile, for a moment we wondered if it were stuffed, but it had simply found a great sunny spot to rest and perhaps ponder its’ advancing years… 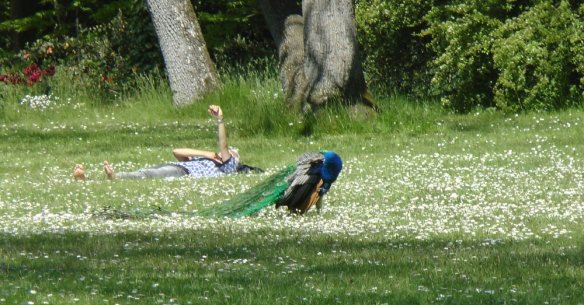 A few folk seemed to just enjoy the tranquility, soak up the sun, and enjoy a bit of preening, along with the geese and peacocks. 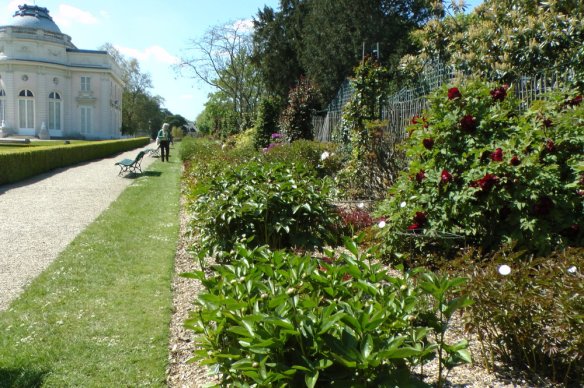 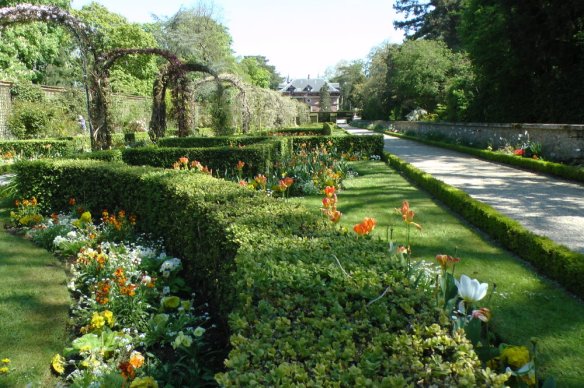 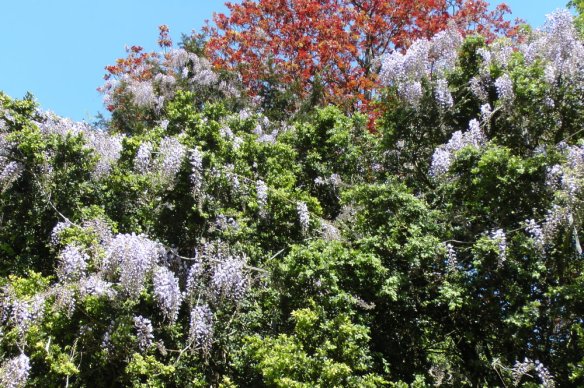 and then one of my favourite scenes of our trip… 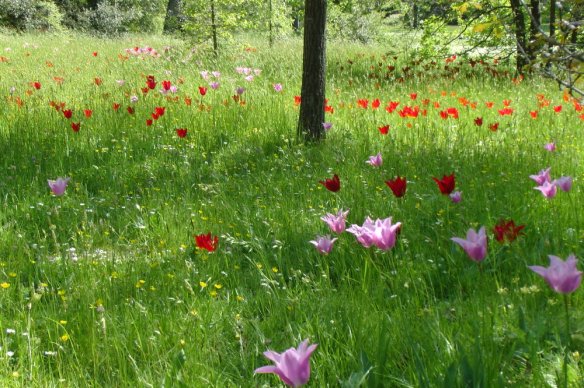 Sunlight catching the mixed plantings of two forms of Tulip. No names again, and a pair of passing gardeners couldn’t enlighten me. Probably not the first year in the ground for these bulbs, from their variable size and patchy distribution. But it occurred to me that what made this such an arresting vista was the special light and background of tall, already flowering buttercup studded grasses above which the Tulip flowers floated and danced like oversized butterflies, leaves and anchoring stems almost hidden from view.

The Power of Green, similarly highlighted by the backdrop of ground cover beneath the cloud pruned Camellias at Albert Kahn.(Mind Your own Business?) How much nicer than just bare soil? 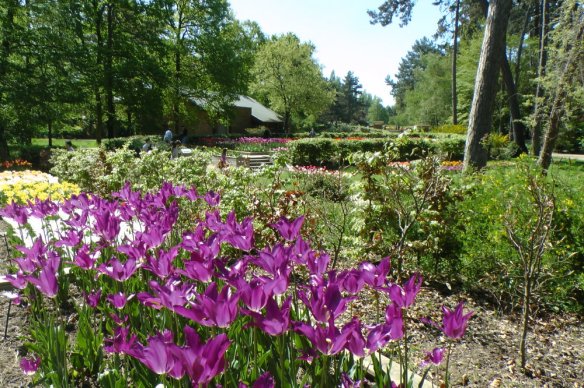 And so back to the Parc Florale de Paris, where the display beds which had been filled with Dahlias last autumn now featured blocks of Tulips, as far as the eye could see. Great for assessing height and colour variations, but, at least to my eye, lacking the wow factor of the previous 2 floral vignettes.

There had been much joint discussion as to whether we should revisit Monet’s Giverny garden (above photo and those below). 10 years ago in identical conditions at the beginning of May it had been inspirational. A garden packed with intermingling flowers and simply heaving with insect life. A seminal moment in how we’ve thought about gardens as havens not just for busy people, but homes for bees, butterflies, flies and all the other life forms that can be encouraged if the right mix of nectar and pollen source flowers are planted. I wasn’t convinced a return would prove equally enjoyable, but was persuaded we should go.

Knowing that we’d had a queue to get in, all those years ago, we’d booked garden tickets on line in advance and arrived at Gare St Lazare 30 minutes early to catch a train out to Vernon. We were not alone in being foiled by the automated ticket machines, which proved impossible to get to sell us return tickets. By the time we’d joined the long queue at the only manned ticket office, the moment was lost.  Our train had left. So we bought train tickets for the following day…

By which time Fiona had been afflicted with a Noravirus like episode. 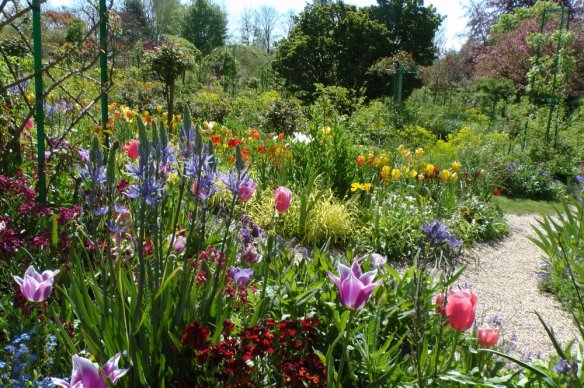 In spite of another very hot day, she gamely agreed to the trek to Giverny, and after being disgorged from the train, I had a sinking feeling. 4 coaches were filled with visitors, with even standing room taking to the door, then a short drive past 3 enormous river cruise ships moored up on the Seine’s banks at Vernon. A 20 minute traffic jam to get into the vastly expanded car park, and then joining an unbroken human trail snaking up to through the pretty village of Giverny to Monet’s garden at Clos Normande.

Our e-ticket at least meant we did have an easier route into the garden, through a side alley, but once inside the scene was claustrophobic.

Only when home did I reflect that I normally struggle to capture the essence of a garden, or flowers, with photographic images, since they can’t capture the bigger picture.

Or movement. Or Sound.

Or scent. Or emotions.

Here the images of Monet’s garden are so much nicer than the actual experience of being there!

The people are largely hidden from view by clever corralling of visitors down just one or two of the narrow pathways. The noise and bustle of hundreds of bodies in what is a physically modest space aren’t apparent.

And one is left with the plantings…

Immaculately maintained and a kaleidoscope of colour, is this what inspired me a decade ago? I wasn’t sure. Weren’t these just a bit too brash?

There were almost no insects.

Hordes of people on a 23 degree plus sunny day in early May, in a garden full of flowers, and in our fairly brief time there, I’d spotted  just 2 hoverflies, 1 bumblebee and I white butterfly.

This was not the stuff of inspiration to create a garden full of insect friendly flowers.

We traipsed in single file round the water lily pool, behind rows of selfie taking visitors, and back into the main garden, heading for the exit as quickly as possible. 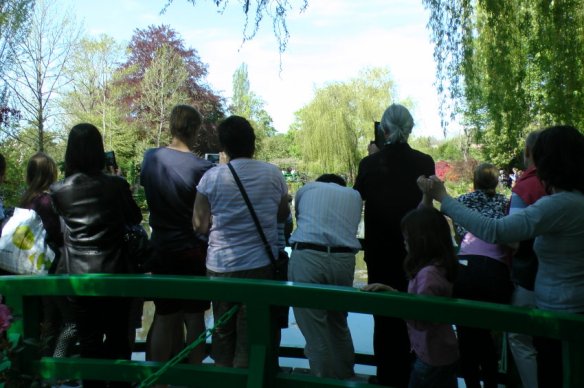 And then a moment of perfect synchronicity for me, and which I seemed to be the only one of the hundreds of visitors to notice.

Glancing round I looked for the source. What special plant had attracted at least a few bees?

And then I saw it.

Looking up, above the high stone wall of the garden, and growing from the neighbouring property was an old apple tree, and above this a developing swarm of honeybees…

On the move, to pastures new. And maybe less cluttered.

Perhaps with fewer perfumed and sweaty bodies? Or less CO2?

We took the very pleasant and largely people free 4.5km walk back to Vernon along the old railway track, during which time we saw 5 (Brimstone/Clouded?) yellow butterflies, 4 Orange – tips, Whites, Speckled Woods and a single Fritillary. And passed a beautifully aesthetically planting outside Giverny’s Impressionist Museum, close to Monet’s garden.

But some questions arose…

What is it that people find enjoyable about a garden visit experience like this one? Just the flowers, or the overall ambience?

A quick glance at recent Giverny Trip advisor feedback, shows that it is still rated very highly. They evidently receive 600,000 annual visitors, and rising. Personally I would have only given it 1 or 2 stars as an overall experience.

Just why have insect numbers in the garden apparently collapsed so dramatically? For sure it had been a cold April in Paris, but a few warm sunny days should have triggered huge insect activity. Are different less appealing plant cultivars being grown than on our previous visit, or are the numbers of people simply discouraging in some way for insects?

Am I just getting too old and grumpy to enjoy this sort of visit, along with massed humanity???? A couple of geese and a bit of peace seem more appealing to me …

A final trip back to Paris on a crowded train with no working air conditioning, or opening windows completed the day. The illness issues curtailed much further activity, but we did make it to the recently reopened Rodin museum. One of the few private museums in Paris, it’s a wonderful mixture of impressive external Bronze sculptures, set amongst imaginative though formal plantings along with an elegant house containing more examples of Rodin’s prolific output, including paintings.

Towards the end of the tour, I found myself captivated by “The Age Of Maturity”. I circled the sculpture and studied the 3 figured forms, and their interactions. 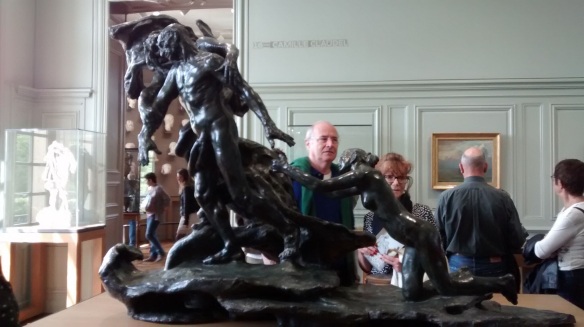 So engrossed in fact, that I failed to notice that the sculpture wasn’t even by Rodin himself, but by one of his students who became his muse and lover, Camille Claudel. Click here for more images of the sculpture, (thanks to Fiona for these), a copy of which is also in the Musee D’Orsay, together with a great essay on its background history, by Ben Pollitt.

Maybe this was to be our last trip to Paris, and we shall seek pastures and experiences new for future breaks from our Welsh scene. If so, along with the bee crowded Paeonia suffruticosa flowers in the garden of the Museum, a fitting place and sculpture to ponder in years to come.

And so back home. I went down with the lurgy, and then continued with my early spring /winter task of rejuvenating some of our hedges, which after decades of untrimmed growth had themselves moved beyond maturity. But more of this next time… 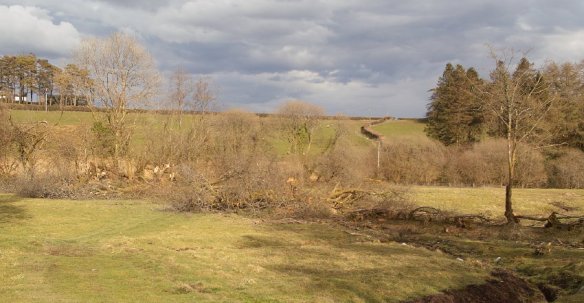 Finally the tree at the beginning of the post was Toona sinensis “Flamingo”. The Chinese Mahogany is also apparently valued for scented leaves, bark and wood, as well as insect friendly flowers in July?

Can we squeeze one in as a reminder of this trip?

16 thoughts on “Looking Up; Beyond Maturity; The Power of Green; and Giverny Revisited.”