Picture the scene. You’ll have to, since the camera was inside as I turned from filling the watering can and spotted a robin perched on the highest point of the rusty chair’s back. Fluffing herself up (and you’ll see why I confidently state the gender) she wiggled and shook coquettishly, backlit by the rising sun. Cue her beau, flying in from the safety of the Rosa glauca hedge, stage left. The briefest of pairings, balanced precariously – a blur of shaking wings and tail feathers, before he left the scene.

This performance repeated itself 3 times in quick succession before I thought go and grab the camera. Needless to say, the pair had left this curiously open, romantic, though romance is surely not an avian concept, rendezvous when I returned, but it reminded me to photograph the immaculate mossy nest tucked into the trailing ferns, which cover the old wall in front of the house, and about 15 yards away from this chair. I’d spotted this nest about a week earlier – already with very young feathered chicks in.

So, peering into the shaded recess, on April 12th, I saw a black empty hole at the nest’s centre, and cursed myself for missing the boat, or chicks, and an early brood image. I snapped a couple of pics of the nest anyway with the camcorder held at arm’s length. Later the same day, as I drank a lunchtime tea in chilly sunshine at the terrace table, I spotted the robin again nipping into the nest opening.

Just cleaning up the nest, I guessed, ready for laying another clutch. I then figured that I could get some time lapse pictures of her, or him, flying in, so set things up on the tripod for a half an hour or so, and wandered off.

In the evening, looking at the footage, I realised that the shaded empty nest’s ‘black hole centre’ was in fact the now very dark foliage of two nearly mature youngsters, hunkered down and keeping still – bird beaks lowered, not expectantly gaping; and pressing bodies firmly into the mossy cup to evade the single huge dark predatory eye investigating their vulnerable refuge. They were clearly nearly large enough to leave the nest, and were surprisingly mobile exploring beneath the wall’s ferny cloak, and popping out in screen captures at various points amongst the greenery.

But how long from mating to viable egg laying? Was it even the same pair of robins I’d seen mating, and if so, there was clearly little hanging around for a breather after rearing one brood? Can robins hold back on egg production, once mating has occurred? With many birds there is an inevitable process of egg yolk enlargement in the ovary, before the egg moves down the oviduct and finally the albumin, membranes and eggshell are laid down, with remarkable rapidity. A hugely sophisticated coordinated assembly line, glimpsed by chance a few days later.

Within another 7 days, 3 pale cream, brown speckled eggs had been laid in the nest (April 19th), but since then although I’ve seen the robins entering the nest, no more have been laid, and as yet they haven’t begun sitting again. Is this because of the change in weather? Or had they been bothered by my fleeting intervention? Or the recent noise and activity of two young, visiting grandchildren? 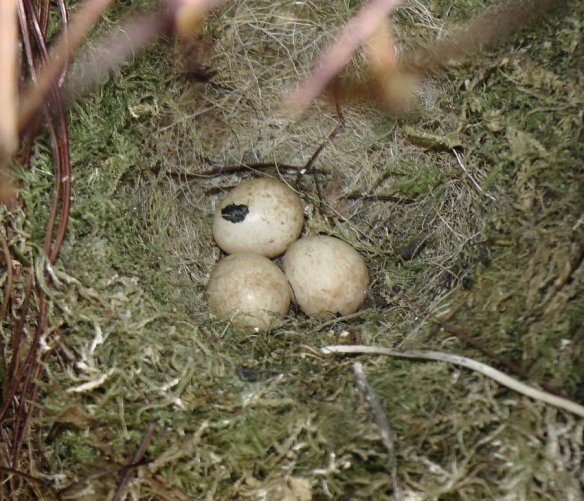 They’ve certainly been using the nearby rusty cranes as ideal perches, for a quick flight into the nest, and presented one or 2 very special photographic moments. 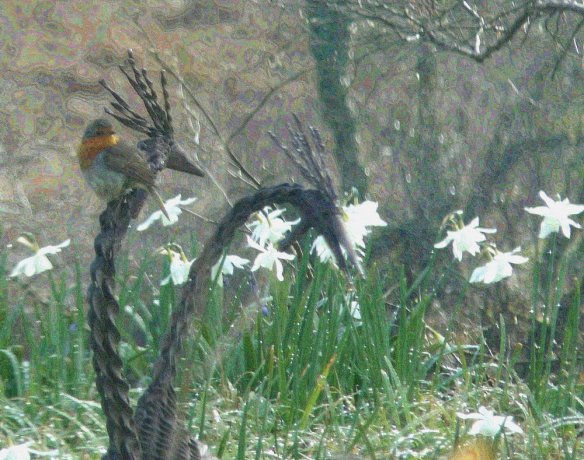 After many aborted efforts, we managed to pay a visit to Cardiff Flower Show this year, and what a delight, falling as it does, towards the end of April. The excellent road system now takes you on dual carriageway from the M4 West, to within just a mile of the city centre’s swish new St. David’s shopping centre, and snazzy multi-storey car park, which in turn is a bare 5 minutes walk from Cardiff Castle and Bute Park – the show’s venue. On a Sunday, with just a couple of traffic lights and roundabouts, and you’re quickly parked up. No queues at all. Compare that with hours spent in traffic jams trying to reach Tatton, or Hampton Court on previous floral show forays, let alone Fiona’s trip into London for Chelsea one year!

Greeted at the entrance by an imposing giant, wicker BFG, since the show was celebrating the 100th anniversary of the birth of Welsh born Roald Dahl, the big advantage of the timing of this show is that, obviously, there are a whole range of nurseries displaying spring flowers and plants, as well as year-round perennials like Clematis. Since these are real favourites in our garden, we had a hugely enjoyable day.

Of particular interest to me was a glimpse of the display of daffodils by Ron and Adrian Scamp, of Quality Daffodils, from Falmouth in Cornwall.

They’ve won an RHS gold medal for their displays every year since 2003, and I’ve used Ron as a source of several old cultivars in recent years – though Narcissus ‘Firebrand’ is going to be one to be added for 2016. It’s not difficult to see why he’s so successful at shows, though many of the modern colour variants weren’t to my taste.

But a fantastic effort to stage this daffodil cornucopia and such a helpful chap. In particular I’ve booked a few of Ron’s latest unnamed N. poeticus seedling bulbs, second photo below (along with several others). Click here for his website, though be warned – you’re unlikely to be able to avoid buying some of the amazing range he offers, from the whole gamut of 13 types or divisions of daffodil flowers. 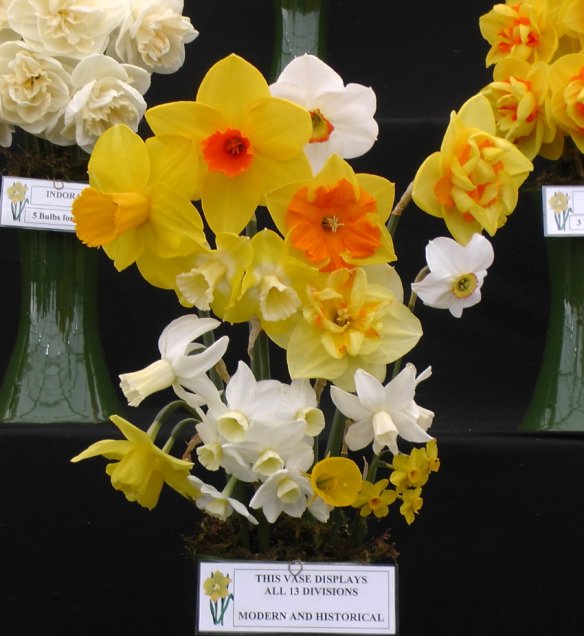 We were also wowed by a fabulous display of Japanese Primula sieboldii variants, from Penny’s primulas, though we suspect that the plants were brought on in polytunnels in time for the show, since our only form in the garden at present, is barely showing its leaves yet. But what a fabulous delicate and subtle early spring flower. Click here for her mail order website. 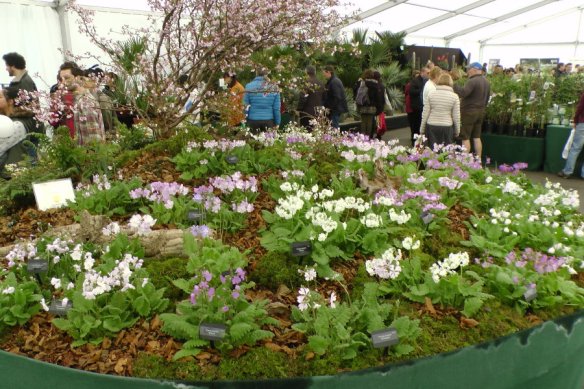 The show gardens were interesting, though obviously not on the scale of the larger flower shows, and I enjoyed seeing the woven bee hives, featured on the garden based on the ethos of the historical, local, physicians of Myddfai.

Apparently the contemporary hives were sourced from Bulgaria, and one is lined both externally, and internally, with clay. The usual stalls selling any manner of gardening ornaments and sheds, as well as some outstanding artisan foodie stalls made for a brilliant day out in cool, but sunny conditions. I imagine it might well become a regular trip for us. 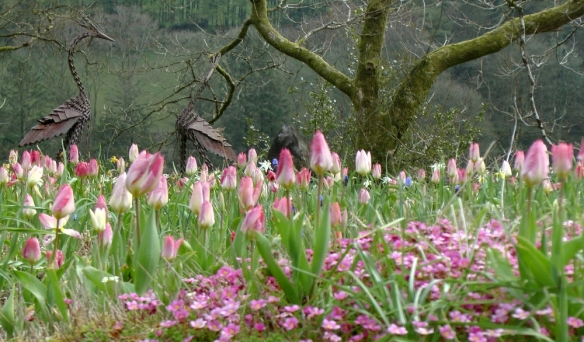 More unique was Fiona’s big adventure up to London with a friend to see the Royal Academy’s recent exhibition “Painting The Modern Garden”.  An exploration of impressionist painter-gardeners, and majoring on the work of Claude Monet, and his iconic garden at Giverny, it was clearly a must visit for us, as the self styled ‘Garden Impressionists’. Except that I’m not a great one for big exhibitions, preferring to study and read at my leisure, removed from the crowds. So, for me, the accompanying book which Fiona was kind enough to return with, is a delight, and one I can thoroughly recommend to anyone unable to have visited the actual exhibition. Many fabulous works of art are featured, and some by painters I was completely unfamiliar with. As well as much background history to the gardens, artists, and impressionists’ movement. The exhibition, although now closed, is currently being screened as a film event at cinemas internationally and in the UK, and will almost certainly be made available as a DVD in due course – one for my wish list. Click here for more.

There are several chapters including a particularly interesting one for me (Painting with Plants), taking the form of an interview between Monty Don and the current head gardener at Giverny, Englishman James Priest. The concept of painting with plants is one which I’ve become a bit obsessed with over the last few years, in trying to move our garden forwards. And at no time does it seem more like a slow-motion artistic endeavour, than during spring, when bulbs constitute your paint box or palette. 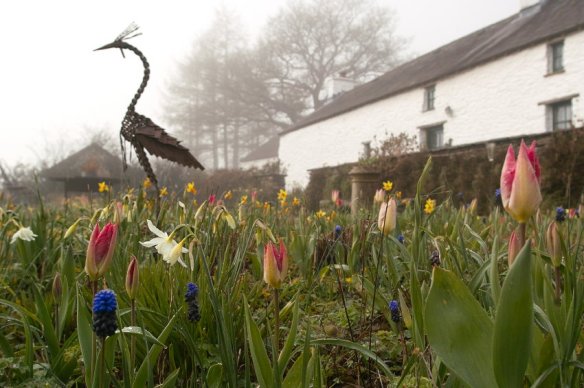 But unfortunately, whilst catalogues can be scoured, and bulbs sourced (apparently Monet was an inveterate catalogue reader, ever alert to the latest introductions), the issues of creating the desired visual feast can be stymied by variations in flowering times, heights and vigour, which are often difficult concepts to communicate via a written and even well photographed catalogue, where one bulb is not shown growing next to another.

So probably nothing beats visiting other gardens in the locality, or better still, trial and error, as with one of our trial areas for older daffodil forms, above. But this all takes time, and I mean years, since one only has a single shot at it each spring, and a modest amount of money.

Monet was fortunate to spend 43 gardening years at Giverny, and latterly was sufficiently successful commercially, as an artist, to employ a team of gardeners. None of us can ever hope to attain the heights of his impressionistic plantings, but occasionally, when the conditions are favourable, I see little vignettes which make all the hard work involved in creating and tending a garden seem worthwhile.

Nearly always the best of these in our garden are at this time of the year, and along with all the physical effort put into this place over the last month –

– mainly in the fields, not the garden (more next time), such moments can be savoured, and built on in one’s mind eye, or revisited through not so subtle, photographic records.

The spring bulbs’ paint has nearly dried for this year, and another layer of embellishment, or blending, or blurring, can be planned for another subterranean splurge this autumn. 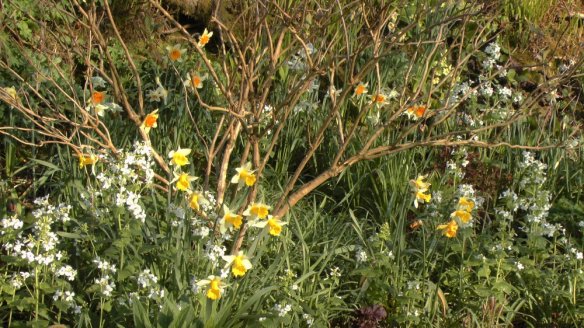 Actually this is not entirely true – my idea from last year of buying surplus bulbs (tulips and some daffodils), and planting them elsewhere to be moved to just the right place in the green, right now, shows definite promise for finessing planting schemes – these are more such trial, or temporary beds, below.

Particularly useful if one is driven, as I seem to increasingly be, towards multi-layered, or intermingling planting mixes. 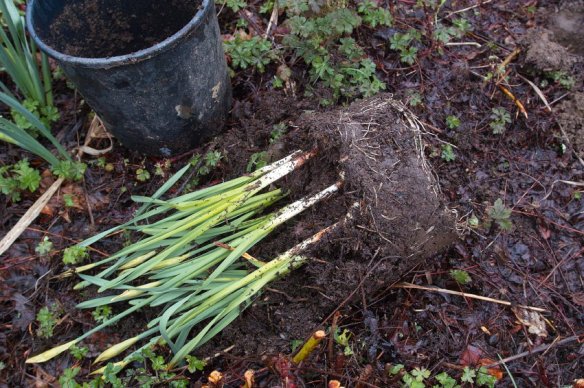 These N. ‘Merlin’ daffodils, planted a dozen to a big pot in home made loosely filled compost, could be knocked out with little root disturbance, and seem to have suffered much less than moving snowdrops in the green, where the bulbs are wrenched from firm soil. 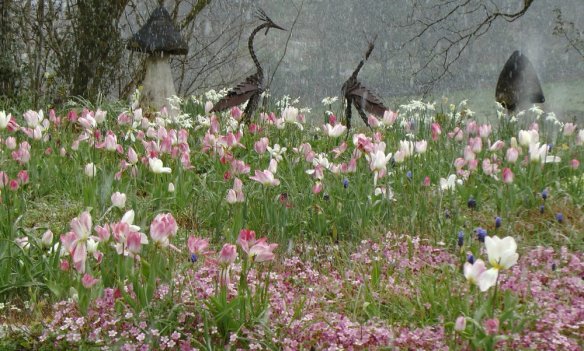 I should record in this strange, cold, and often windy month which has been the worst I can recall for early season pollinators, that the cuckoo arrived significantly early on April 12th, followed unusually late, by 3 swallows a week later.

A Damselfly rashly emerged in mid April, as did a tail less lizard.

And quickly realised, that hibernation was perhaps a safer option for now, as the snow returned in the last week of the month, for some of the most gorgeous impressionistic and suitably fleeting spring scenes. 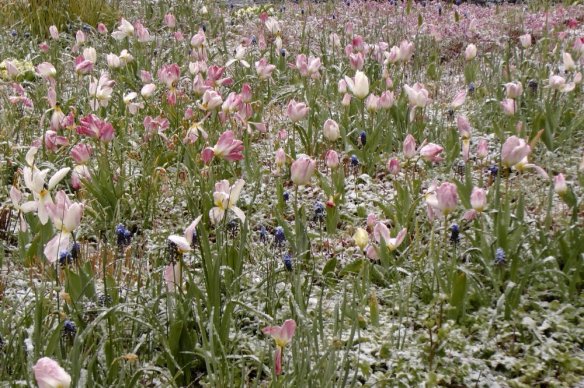 17 thoughts on “Early Birds, Show Stoppers and Painting the Garden”