A nearby West Welsh village, Eglwyswrw, had featured in the national media as it closed in on the 90 year old UK record for the longest continual run of days with some rainfall recorded (held by the Isle of Islay with 89 days, Click here for more). Eglwyswrw eventually paused at 85 days, with a dry day, and the weather at Gelli Uchaf has also improved a bit.

Rainfall diminished, temperatures dropped, and we had a couple of sunsets sufficiently glorious to stand and stare, as the sun dipped behind Mynydd Llanybydder, and the ranks of starling flocks headed West, directly overhead, towards the burning clouds. 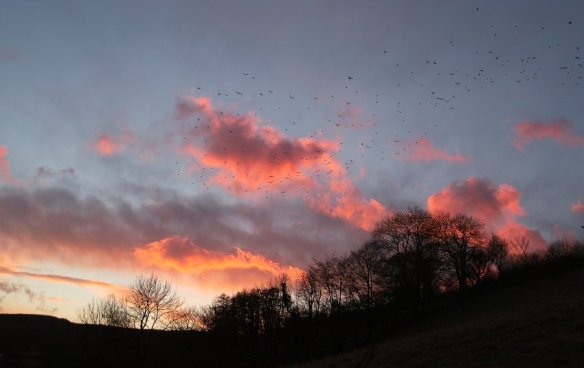 We’ve even had a little white relief to the landscape too, with overnight hail showers, on January 10th, but our still warm soil meant that this quickly melted. 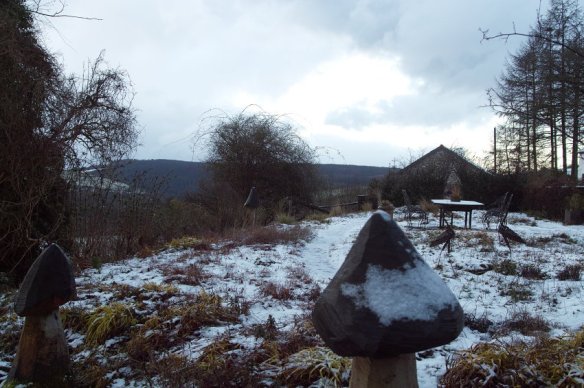 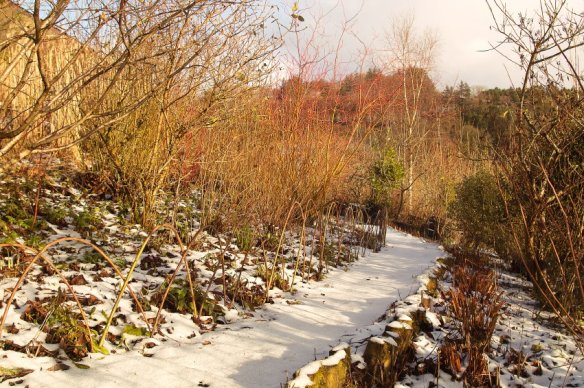 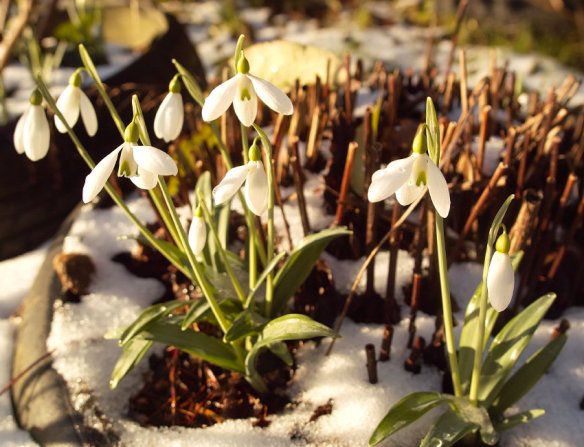 And finally, on January 19th, the wind dropped, the clouds dissipated, and temperatures fell away sharply. The 20th dawned, for the first time since November 2nd, with not a cloud in the sky, and a sharp frost etching everything in sight with a welcome rime.

The ground, a previously constantly squelching, slippery sponge, suddenly transformed once more to terra firma. A novelty to be explored, along with the welcome change in light.

Not so good for early season flower photography, since even the toughies, like Galanthus ‘Atkinsii’, below, that grace a mid-winter garden with antifreeze primed sap, tend to keel over in such extreme conditions, only to bounce back as the sun’s warming power kicks in later in the day.

And some of the verdant new growth on the Crocosmias will surely not be looking like this in a few days’ time, but still worth recording.

I’d checked the droopy snowdrops – only the wide opened ‘Colossus’ still standing tall amongst the 70 varieties which are already flowering in this perversely mild and wet winter. Restocked the wood baskets; had our mid morning tea; and was about to gear up for some more track work, when I spotted what I’d missed on at least 3 passes, right outside the back door. 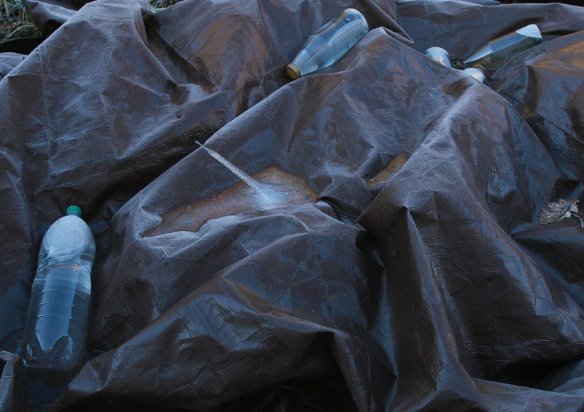 Upside down, or underneath a dripping roof line, this would perhaps be mundane. But this was away from any such easy explanations. An ice spike, to match the only other example I’ve ever seen which was almost exactly 3 years ago. Click here for the link and pictures.

But this spike was even larger, and more impressive, given the angle it formed at, in wind free conditions overnight. 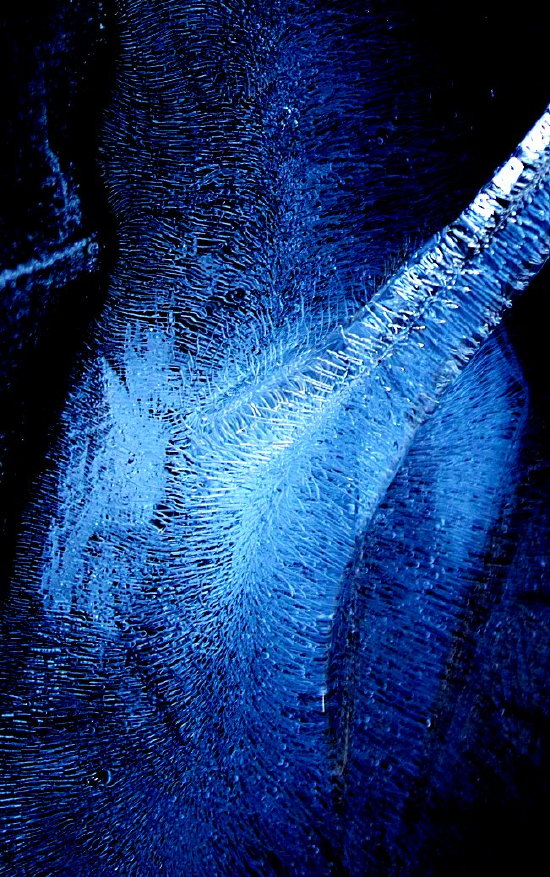 Like the previous ice vase, there are masses of tiny air bubbles, trapped within the ice. Many are also of an interesting shape, as shown. Bubbles form when dissolved air is forced out of solution as the water cools, and even out of ice itself. If there is a layer of ice above it, then the air can’t escape, and a bubble will be trapped.

But how about the linear looking bubbles in the spike above – which presumably grows in girth as water flows down it’s outside? Or does it?

Is it hollow? Like the earlier Ice Vase. I can’t make it out from the pictures, and the spike is no more. Ephemerally etherised, melted to tissue soaked oblivion, after centre piecing the tables for the annual general meeting and meal of Cothi Gardeners.

Or is the water rising up this air bubbled honeycomb like structure, as it does with rising damp in a wall, by capillary action – only to freeze on contact with the cold air?

I really can’t grasp how this spike can have grown. From the inside, spewing out from the tip, or the outside? 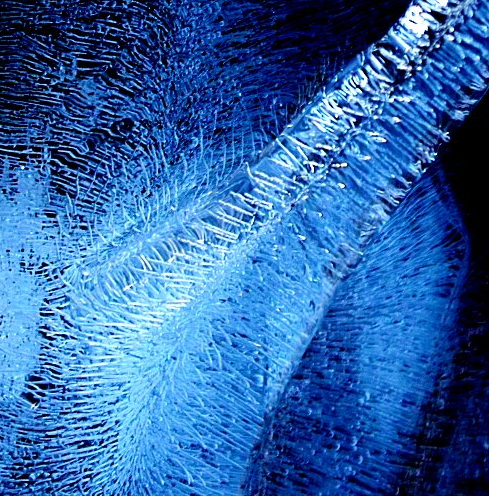 Addendum! I’ve just checked again, and there is now quite a detailed explanation of ice spike formation on Wikipedia, which I’m pretty certain wasn’t there 3 years ago. I needed to reread it a few times to work it out, but if you want a plausible scientific explanation, then click here!

Since the frozen water was rainfall originally, it would probably have quite a high dissolved air content in the first place. Click here, and here, and here for more on why, and how, air bubbles form inside ice. 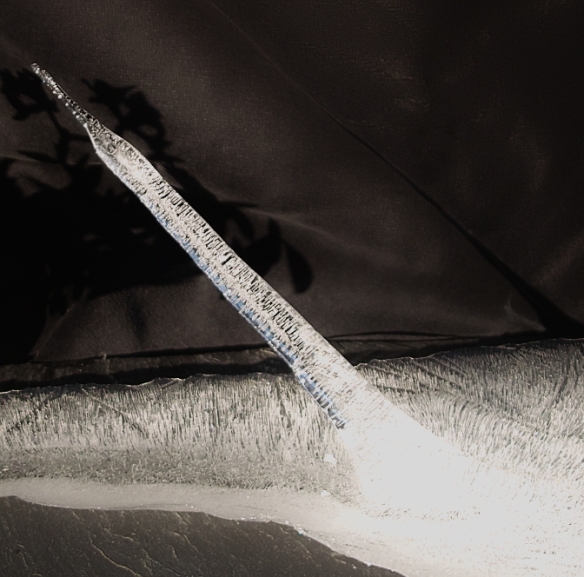 For those wondering about the mechanism of formation of such structures, I would suggest reading my previous attempt at explanation, but it basically relies, as pointed out by corriegendus in a comment at the end of the earlier post, on the fortunate property of water to suddenly begin to become less dense, as its temperature approaches zero. The graph below illustrates this.

A tiny defect in the early forming ice sheet on the water’s surface can then permit cooling and rising water, (as it becomes less dense), to be forced out to escape on to the ice surface, where exposed to the much colder air temperatures, it will tend to freeze. Quite how it can build up to such a gravity defying extent, and why any defect in the surface ice sheet doesn’t quickly get plugged by the ice forming on top, is beyond me.

Best just to enjoy, alongside the only snowdrop flowers to remain turgid in such low temperatures, the large, but not quite colossal, Galanthus ‘Colossus’.

In last year’s autumnal bulb planting, one of those selected for mass use, was the earliest to flower with us, Crocus sieberi ‘Firefly’. It’s a perfect splash of colour, almost as effective in closed bud, as when open – which is just as well, since so far this year, there haven’t yet been any days to coax them into opening.

But in spite of my usual approach of covering the bulbs in cayenne pepper at planting time, a lot of my hard work and money was wasted with significant early predation by small rodents – probably voles, within just days of planting.

The corms are being winkled out from several inches below the surface with remarkable ease. I feared the worst, but quite a few have still emerged, so that if any more ever get planted, I shall abandon my usual approach of planting in groups of 5 or 7, spaced out by a couple of inches, and instead dot plant single bulbs at perhaps eighteen inch centres. 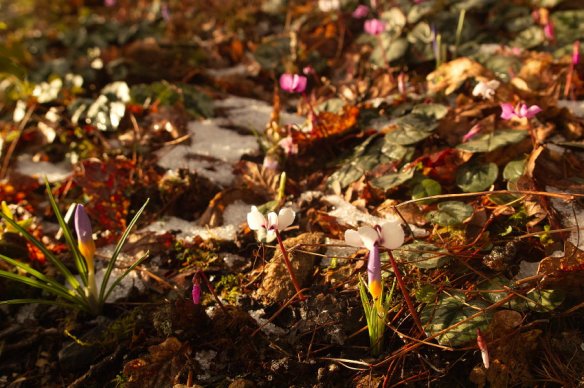 I couldn’t find any useful data on the relative taste appeal of different Crocus varieties, though I’ve read somewhere that C. tommasinianus isn’t particularly appealing – a good job, since it’s our mainstay Crocus in the garden. But, I found an interesting piece of work carried out in the USA, where different bulb types were fed to captive voles, mixed in with apple sauce – apparently their preferred food. The researchers, (Curtis, Curtis and Miller), used just one Crocus, C. ‘Pickwick’ along with daffodils, tulips, etc. Perhaps there is scope here for distraction feeding of apple sauce, or apple rings or slices, away from any new bulb plantings, when Crocus corms seem most at risk? Or as a bait in traps, when there are the first signs of rodent predation?

With such early flowering of many different snowdrops in the garden, (G. ‘Trumps’ above), I should perhaps mention our opening times of the garden, for charity under the National Gardens Scheme (NGS) this year.

We are opening by appointment/arrangement only.

We are also only opening for groups of 6 or more. So if you fancy coming and having a look, do get a small, (or larger) group together, and get in touch. We’d look forward to seeing you.

This month has brought another showing of the spiral conundrum – preferentially early snow/hail melt from the quarry tiles, compared with the crushed slate. And I can confirm that the previous day was one of relatively strong sunshine – so my guess is that the quarry tiles had more retained heat than the air filled crushed slate.

3 ‘ABS’ to finish – heck, I’m allowed a few after all those grey skies!

25 thoughts on “Ice and Snow and Fireflies; Garden Opening 2016”