Skip to primary content
We feel fortunate to have been spared the heavy snow in the latest blast of this extended winter. But the freezing Easterlies are with us again, and after feeding and sympathising with the sheep and poultry on Monday, I thought I should have a garden walk, not really with the hope of seeing any floral awakenings – everything is static, or worse still freeze dried again. The famous line from Oscar winning, obsessive compulsive Melvin, Jack Nicholson, comes into my head: “What if this is as good as it gets?” The Hellebore flowers will certainly NOT recover this year.
But at least daily checks often pick up potential problems early on. So as I rounded the barn beneath our big oak, I instantly spotted a new issue. A huge hole had been excavated between snowdrops and hellebores overnight, trashing a few Narcissus ‘Ice Follies’ flower stems in the process. 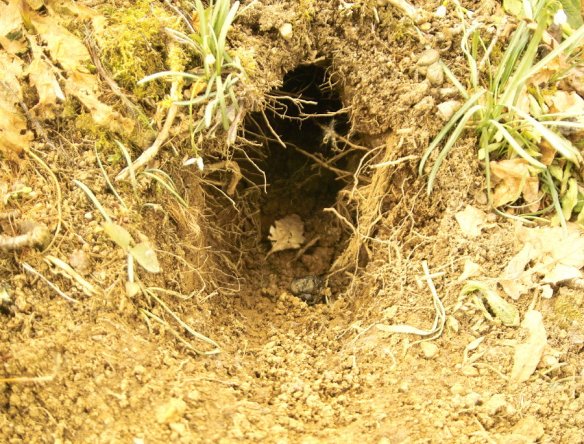 Snarl.
Looking around I spotted another one, 10 yards to the left. Interestingly, both were at sites that have been opened up several times before in the last few years, usually in early spring, by garden visiting rabbits. Wild rabbit breeding can begin in earnest by the end of January. The pregnant does will dig short 2 to 3 feet deep burrows attached to, or sometimes completely separate from, the main warren in which to deliver their young. The initially blind, deaf, hairless baby rabbits remain in these ‘stops’ which the doe will visit often just once a day when she suckles the young, blocking up the entrance when she leaves to preserve heat, and protect against predators, or me.

Within a month the young rabbits are independent, and the doe can produce another litter. See why the ‘breeding like rabbits’ expression developed? A constant war of attrition now occurs between me and the invading lagomorphs. I rarely see them, but scrapes, droppings, and selectively chomped foliage indicate their nocturnal activity. I have a zero tolerance of any new excavations, filling them in as soon as possible, and sometimes throwing down a sprinkling of cayenne pepper as a sign of my annoyance onto the replaced earth.

But sadly, it doesn’t.

This was going to be my approach to both of these new excavations. But the droppings I found at the entrance to the largest tunnel were definitely not rabbit. Badger or fox I suspect. 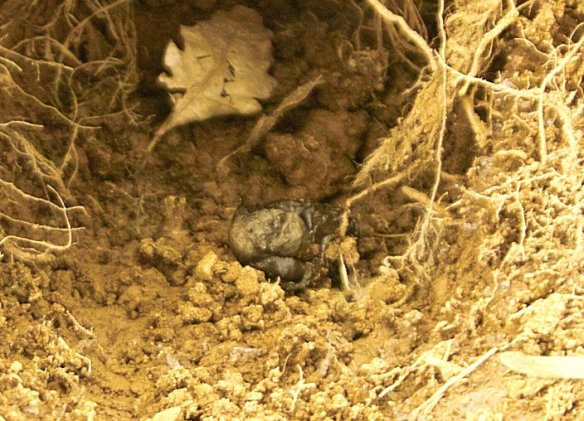 Both are around in the countryside nearby, and with poultry and lambs now, we have to adopt a similarly discouraging approach.
It was only after filling the hole in, that I wondered what had in fact happened here, whilst we were tucked up in bed. A bit of research revealed that both badgers and foxes will take young rabbits from burrows, if they can get at them. And with so little food around at the moment, had a fox or badger happened upon a rabbit, or even smelled evidence of previous rabbit activity, and opened up both holes just to check?
My other line of defence in the fox and rabbit conflict is deterrence. And here I resort to the method which is clearly familiar to our North American friends, and regular blog readers, judging by the apparent commercial success of P Mart.
Human hair apparently also has the right mix of predator scent to warn badgers and foxes away, but at my stage of life, there’s little of this surplus to requirements, so pee from a watering can is what it has to be. Like any security measure, only time will tell just how effective it really is, but to date we’ve had no poultry losses. Friends living nearby have lost 9 chickens out of 11, within the last year to a fox.

The badger trust also confirms these deterrents have been tried, along with lion dung, before adding without any explanation, that they are not recommended! Presumably, in today’s H&S obsessed culture, they’re worried that endorsing it might encourage armies of gardeners to turn up at the local zoo with bucket and spade.
(Remember poor ‘Albert and the Lion’? I thought I did, and remembered that it was a poem by Hilaire Belloc. It wasn’t. After googling it, I discovered that it was by the unfamiliar Marriott Edgar. But I probably recalled it from a recording of the poem by Stanley Holloway, which was no doubt played on the radio, and listened to with glee by me in the ’60’s.

Click here for the PDF advice to gardeners who have a badger problem, from the Badger Trust.

So, with these new signs of predator activity, I thought it was time to re-mark the garden boundaries. Doing so had me walking past the primitive home made attempt at a top bar bee hive, which I’ve mentioned in earlier posts. This had fallen over just a few days earlier, and I suddenly wondered if this had not been as a result of winds as I’d first assumed, but that perhaps the animal responsible for the current excavations had pushed it over, smelling traces of honey and beeswax. I paused at the fallen logs, looking for any claw marks or droppings.

Nothing. So I started to re assemble the crude structure. I’d put the lower 2 sections back together, when I glanced into the top section to the left in the above image, which still had the waterproofing lid on it, to see an obvious hairy form pressed tight into the corner. What was it?

As you can see, the young rabbit lingered long enough for me to return inside, grab the camera and get a few pictures. Had it sought refuge in there after escaping the snapping jaws of the burrow excavator? We’ll never know, but with photos taken, it was tipped out to no doubt return to plague the garden in the near future.

But a reminder that although we gardeners are frustrated by the lack of the weather’s normal spring trajectory, wildlife is carrying on coping and battling away in spite of the unseasonal cold. Not to mention the livestock. ‘Bernie the Bronze’ still struts his stuff in the cold even though his 2 female companions are hunkered down on their egg clutches, oblivious (or maybe not?) to his antics. 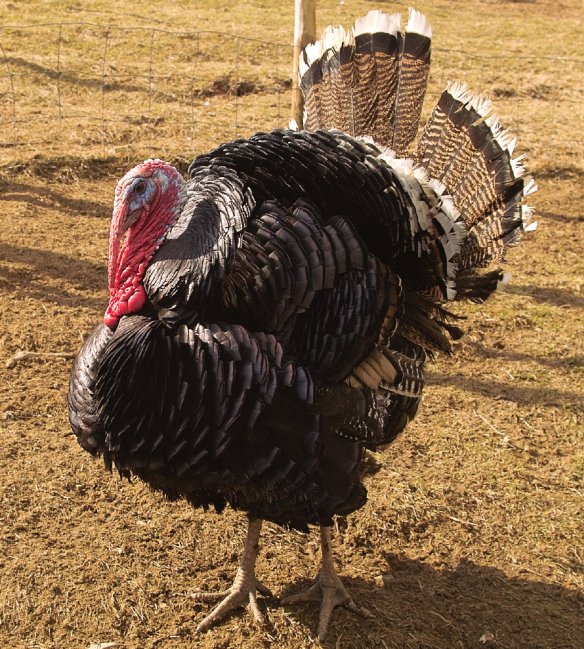 I’m just finishing off hand pollinating our first Lord Napier nectarine flowers in the greenhouse. It produced such superb fruit last July, that I added a couple of extra, and later, varieties last autumn. My hand pollinating brush, carefully crafted from 5 wonderfully downy turkey feathers pushed into the hollow end of a giant Miscanthus stem, means that I can, like that wonderful Heineken brew, now reach the blooms that would otherwise be out of reach. 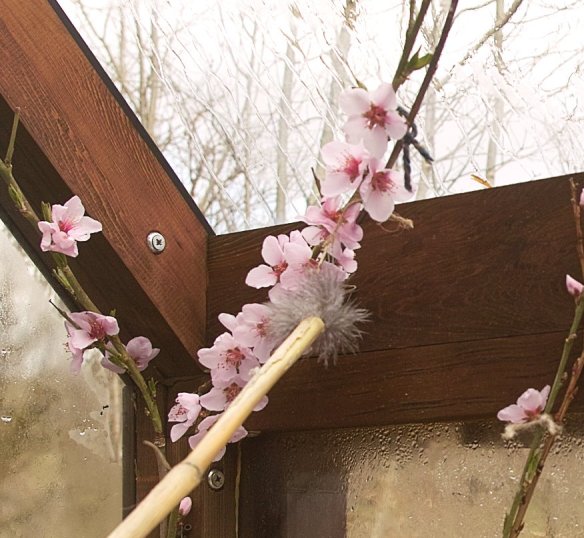 The reason being that my polycarbonate protected central greenhouse ‘inner zone’ is STILL in place, providing a degree of cossetting to cuttings and seedlings, but preventing me from reaching blooms with a paintbrush, as I did last year.

For those interested in the progress of the compost heated greenhouse inner zone, this is what things looked like on March 19th. The peas have reached the top of the polycarbonate, and the lemons are still alive. I shall give a final update when winter finally finishes.

“Planting For Pollinators” is the title of a film based talk suggested to me  last year by a gardening club secretary. The film/talk had its first showing last Tuesday to the very welcoming gardeners of Newport (Pembrokeshire) Gardening Club. Initially dreading having to put another film together – I hate the tedious editing process – it ended up being a great stimulus for me to undertake lots of further research around this vital topic.

For those unfamiliar with the gorgeous small seaside resort of Newport, it nestles at the inlet of Parrog bay and estuary. I’d hoped for a sunset image when we arrived to set up. Instead a suitably grey, chilly scene greeted us as we parked at the venue – the Newport Sailing Club House on the sea front and overlooking the bay with the tide right in.

Half an hour to set up the projection equipment and sound system in the upstairs Commodore’s lounge, complete with trophy cabinet overlooking the sea.
Using footage filmed in our garden over the last 3 years, I’d worked on the film over the winter, and there was a certain amount of nervousness on my part over how it would be delivered and received.

Speaking to a series of moving images with accompanying natural garden sounds is considerably more challenging than a normal slideshow, but people do seem to appreciate the movement and sound that video can provide. Apart from a couple of minor first night glitches it went well, and we had really encouraging feedback from the audience afterwards. The still image above, sets the opening scene for the film, capturing a huge honeybee influx onto the Sedum flowers in our garden last September, for just one and a half hours.
We nearly always come away from these events both re-energised by other gardeners’ enthusiasm, and also picking up a few practical tips from Q and A, and chatting to members after the film. This night was no exception, and the subject of insect friendly flowers is one I’ve become increasingly fascinated by, and fortunately it does seem to be gaining more widespread coverage in the gardening media in recent times.

For those interested in more of my thoughts on this issue they could click here for ‘The Real Botany of Desire” Folders on the home page. Or for more details, here, on the  Talks and Films webpage.

After knocking down the equipment and loading the car, we had a memorable journey home, not because of minor snow flurries, but because we witnessed not one, but two barn owls, hunting along road side verges at different points of the hour long trip. Is there a collective noun for flying barn owls. Perhaps a ‘flurry’ would be appropriate?

Finally, I read that this week, another familiar plant has undergone a name change. Dicentra spectabilis (Bleeding Heart) is now apparently Lamprocapnos spectabilis. We grow it as the lovely early white flowered form, (above from last May), which seems to do well with us, but just now has had its early shoots frozen off.
It will recover I’m sure, since it’s easy to propagate from root cuttings so must have a tough constitution. But I wondered in a moment of frivolity, whether named cultivars of plants shouldn’t also be candidates for updating or renaming from time to time as fashion or perhaps weather conditions change? Since we should be in the middle of the daffodil season now, but are perhaps 3 weeks late, the following changes might be considered by the powers that be:

Happy Easter to you all.

The observant will notice several font changes throughout this post. This is because I’ve been producing another (semi-competitive) blog, organised by ‘The English Garden’ magazine and ‘Wiggly Wigglers’ over the last few months which you could access here.
(Addendum – in late 2020 as part of a major project to re-edit my blog posts and correct glitches, I revisited this page and was able to iron out the font change issues. However, anyone clicking on the link above will see that all my writings and images for the English Garden magazine competition have completely disappeared – to be replaced with a commercial advertisement promoting quality bedding plants for sale on line! Even more pleased now that I recently cancelled my English Garden magazine subscription! Needless to say, I, as a contributor of copy to this project, have lost it all and wasn’t notified at all of the likely selling on of the domain name to  another commercial organisation, who have hijacked the domain’s content.
And the moral? There’s probably no such thing as a safe digital legacy!)