Intrigued by the email mentioning the basket making event held last week at the National Botanic Garden of Wales (NBGW), we headed down and thoroughly enjoyed the display and demonstrations in the marquee by various basketry and rope work experts from across the UK. I was particularly taken by experiencing the sensation of riving a thin rod of willow into 3 separate strands using a special waxed wooden tool. Somehow you couldn’t quite believe that such a thin wooden stem could split so beautifully, and simply. Several of the professional basket makers displayed work with lovely aesthetic lines, wonderful use of coloured rods, and real finesse. 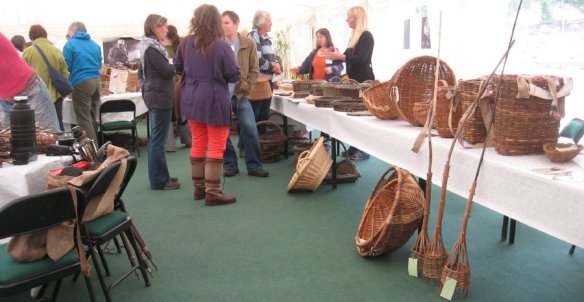 However perhaps the highlight of the day was seeing the very recently completed wild boar willow sculpture constructed by a team of about 15 basket makers over a period of 3 days under the direction of the willow artist Michelle Cain. The boar will be a feature of the NBGW scene for about 3 years before decay destroys it, and it has real presence and size – about 10 feet tall I would guess, and a lovely rusty-brown colour. But how extraordinary that a team working from a sketch could produce such a life-like sculpture, working in the open in wet conditions within such a short space of time. I recommend a visit to view, and am including a couple of tweaked photos which Fiona took below, and a link to Michelle’s website to see some of the other work which she has created, by clicking here. 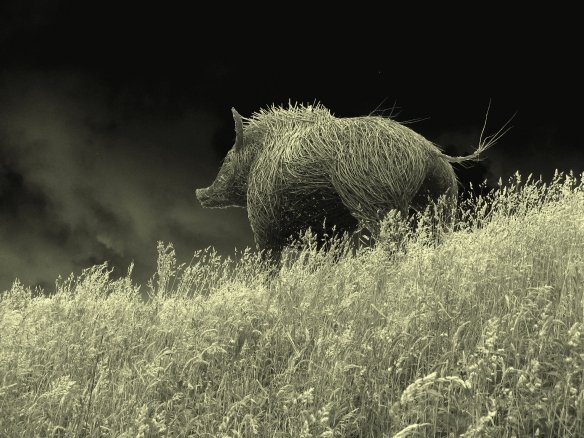 Thursday morning saw a change in the weather at Gelli. From cold grey and wet, to hot, humid, grey and pretty quickly wet, and the first thunderstorm for a long time. The change in air temperature really hit you as you left the house. One of my first daily jobs is getting some home-made bread from the freezer. Of late, I nearly always get distracted by weeds in the yard, and so I did on Thursday before moving into the copse and pulling up small tufts of pearlwort, shown below, one of the perennial weed thugs of our mossy paths. Like hairy bittercress (HB) it seems to be able to grow, flower and seed remarkably quickly, but unlike HB, it often needs quite a twist right at the stem base to be certain that all the roots are removed – otherwise like all good weeds it will quickly rejuvenate whilst your back is turned.

So as I was bent over, nose quite close to the ground, I became aware of a foul smell reminiscent of rotting flesh. I’d noticed that a sycamore stump had produced its second crop of sulphur tuft mushrooms this year just a few days previously, and wondered whether this was the origin of the stench. Having eliminated it by walking over and noticing that in fact even in its rotting state its pretty odourless, a second possibility surfaced. Could it be a stinkhorn, Phallus impudicus?

Following the scent trail a couple of yards along the path, there indeed was a pretty pristine stinkhorn mushroom, in all its immodest (impudicus) glory. At least pristine in the sense that it was as yet showing no slug damage. However, the green black slime coating that covers the cream indented surface of the ‘gleba’ had already been removed by the host of flies on it. This is the curious feature of the mushroom – it emerges and emits its carrion like stench to attract flies to its slime, which in fact contains all of the mushroom’s spores. The flies consume this, paddle around in it, and then distribute the spores in their droppings and where they subsequently land with sticky feet, thus aiding the fungus in its efforts to colonise new sites. 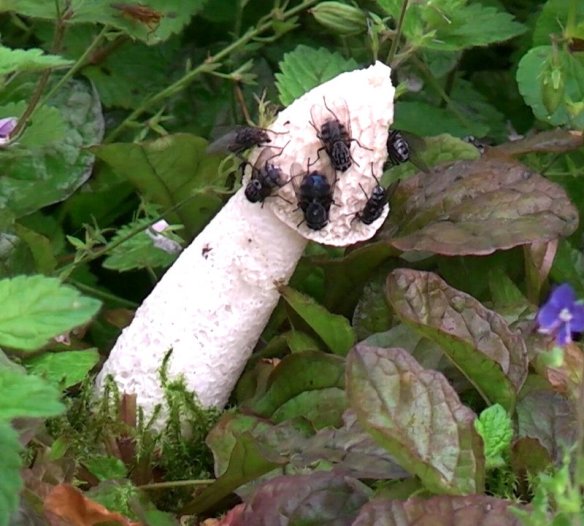 The appropriately named Phallus impudicus – stinkhorn. Over the years, stinkhorns have ‘popped up’ in this part of the copse on an occasional basis, but not I think for at least 3 years (indeed I can’t find any previous images of a stinkhorn I took showing the slime coating). With the smell they produce, it’s unlikely we’d have missed any in the intervening years. So I suspect that the sudden weather change from cold wet, to warm wet, may have triggered the underground fungal mycelium into action, pushing up first an egg like structure, and then from this ‘egg’ the phallus like fruiting body is produced. Just how a mycelial structure below ground level picks up on and reacts so quickly to a change in temperature above ground level, I don’t know. I did read though that last Thursday saw the largest number of individual lightning strikes over the UK ever recorded in a single day (at 110,000, the equivalent of 4 months normal lightning strikes in just 24 hours – though how these strikes are recorded was not explained). So perhaps air pressure changes, or even some electrical or ionic changes may play a part in the stinkhorns’ determination to produce its reproductive stage from the soil’s depths.

I’ve never seen the round ‘witch’s egg’ structure which preludes the horn, probably because the actual horn can grow at between 4 to 6 inches per hour, and with a force that enables it to push up through even very hard materials like tarmacadam. Going out between showers just 30 hours later, it took me about 5 minutes to find any trace of it. The complete structure had been devoured by slugs, leaving a hollowed-out stem to a couple of inches below ground, still retaining a slimy sheath. Perhaps this is why speed is of the essence for this fungus – better get a move on before the slugs come to devour your carefully formed fruiting body.

(In between the bugle leaves, centre image, the creamy base of the stinkhorn can be seen with residual stinkhorn slime in a thick curved beige crescent sheath to the right, and a slug to the bottom left of the opening).

How appropriate to have talked so far about flies’ slimy feet, and slugs being out to get you. Wednesday night saw us returning home late, after giving our ‘Botany of Desire’ film /talk to the Llangadog gardening club. Unloading the car before the rain started, I’d just changed out of my shoes and was looking for my indoor crocs when as I headed towards the fridge in socked feet only, I was aware of squashing something big underfoot. In the gloom from the still warming and brightening low energy light bulbs, I could make out what looked at first like a small vegetable – but on closer inspection the gory truth was apparent. 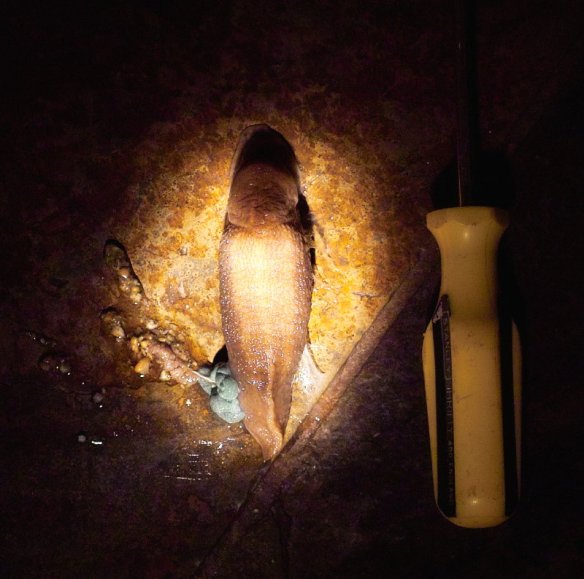 A monster squashed slug. The screwdriver handle is to give a bit of scale. But how had it got there? Things are getting serious if they’re starting to grow to this size and are even now planning raids abseiling down the unused kitchen stone chimney! (See my last post if you’re unfamiliar with slugs’ prowess in this field).

On a cheerier note, great excitement for me when the first flowers opened on the ‘White Dragon’, or what we may now call the ‘Gelli Rose’. This has gone from seedling to serious Kiftsgate rambling rose contender in just a couple of years. The buds have a faint pink tinge, and open to these lovely simple single white flowers with a faint, though pleasant, rose scent.

The vigorous new shoots have an attractive purple tinge to the stems. We’ll have to wait to see if hips follow, but its vigour and disease resistance mean that I’ll plant one of the cuttings I took last year into a sunnier location this autumn to see how it performs elsewhere in the garden.

Finally, with all the wet weather (today’s Met.Office blog confirms that by June 27th it’s the wettest Welsh June since records began in 1910, with an average of 186.3mm – although here at Gelli we’re over 300 mm now), it’s been pleasant to escape into the greenhouse and watch the ‘Tomcot’ apricots starting to colour up, even in this sunlight deprived season. They’ve grown vigorously this year after being planted last autumn, and one of the two trees has about a dozen large fruit already well-developed.

I’m training them along willow rods in a variant of a fan system, to eventually follow the wooden greenhouse rafters.

As with tomato ripening, apricot maturity is linked to temperatures as much as sunlight, and the production of ethylene gas by the developing fruit, and so they’ve certainly benefited from avoiding this year’s June weather by being planted under cover. I wonder if having these maturing fruit in the greenhouse will aid earlier ripening of our tomatoes, thanks to the ethylene that the fruit will release? Last year I resorted to hanging banana skins in the greenhouse, as an ethylene source to help to speed up the process.

Notwithstanding this, the result is 100 percent fruit set so far on the flowers of most cultivars. For those in the dark about tomato pollination, vibration, and bumblebees,click here for more details from last year’s blog post. I’ve also just found another interesting link with actual video footage of flowers with poricidal anthers – like tomatoes- which don’t produce any nectar and only reward the visiting insect with pollen if the insect is capable of vibrating the flower to shake the pollen out from a small opening at the end of a tube like structured anther. Click here for videos of this.

I’m also choosing the best plants of 3 tomato varieties grown this year and marking them with coloured clothes pegs so that I can hand pollinate them specifically with a view to saving seed this autumn, since there is inevitable variation in vigour and flower production between individual plants. Certainly in this very low light level year, the early flowering of the 2 varieties I bought last year from Real Seeds in Newport is noticeable (their own selections for early fruiting), certainly beating last year’s Maskotka. And as I discovered last year, since it will take about 60 days for a tomato to ripen from the day that the fruit first forms, it really is important to choose varieties which begin flowering as early as possible.

An interesting web on Astrantia major. 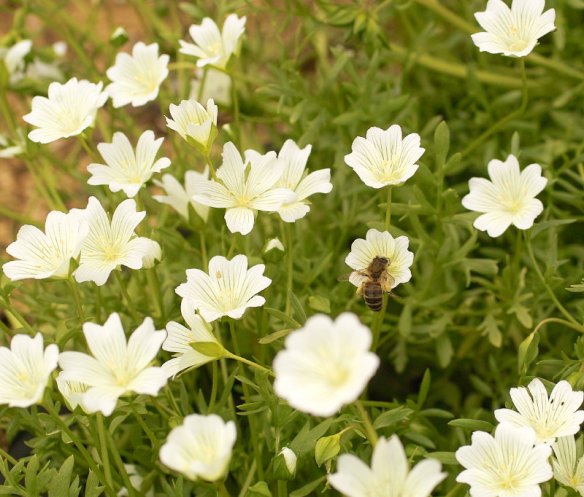 New in the garden for 2012 is this white flowered form of Limnanthes douglasii subsp. nivea ‘Meringue’, which, when it stops raining, is a hit with honeybees.

Look closely and you can see a pied wagtail using the mown path through the high meadow, as my regular walking companion.

View through into the magic terrace garden.

Still adding a bit of colour in the wettest June since records began, Geranium lucidum and Brunnera macrophylla ‘Mayenne Blue’.

View to the South.