How do you deal with weeds in a garden ? And what constitutes a weed in a garden anyway? A visitor last year, walked through our vegetable and fruit garden and remarked that we allowed a pernicious weed, Creeping Buttercup, to flourish in amongst the grass, bulbs and odd primrose between the fruit tree trunks. Of course he was quite right, but in that location, with the other plants growing there, I like its vigour and for a month or so strong yellow flowers, and it can be kept restrained by mowing the grass paths which delineate this area. But elsewhere, where less vigorous plants are being encouraged, plants like this would quickly take over and swamp an area, to the exclusion of all others. Richard Mabey has written a highly acclaimed book on the subject of weeds recently, which I haven’t yet had a chance to read, and Jan Miller has also written a great book on encouraging wild life into the garden which values the contribution of weeds, or should we say native plants, in supporting our indigenous wildlife – she’s shown that some of the most diverse fauna in her part of North Wales can be found on neglected old industrial or brown field sites where soil conditions are poor and weeds dominate. (I’ve also recently discovered a group called the Wildlife Gardening Forum which other people might be interested in joining if this aspect of gardening is of interest).

I’ve already mentioned that we do resort to occasional painting of individual weeds with glyphosate, but in the main it’s down to bent-back hand weeding. Actually I enjoy this up to a point, for now, and it’s a great way of getting to know what the nasties look like at an early stage, and also spotting self-sown seedlings of choice plants which can be saved, protected from slugs, potted up or moved. Over the years the really pretty native Geranium lucidum arrived somehow in the garden, and was spared because I knew what the pair of first Geranium leaves looked like, and that there were no Geraniums in this part of the garden, so was intrigued to see what these seedlings would turn out to be.

Geranium lucidum which arrived in the garden, somehow from somewhere, and was spared at the seedling stage 23/04/11

It now seeds itself around amongst Sweet Woodruff in very dry poor soil at the base of a big oak tree, with summer shade, and wild ferns were moved here to add interest later in the year. 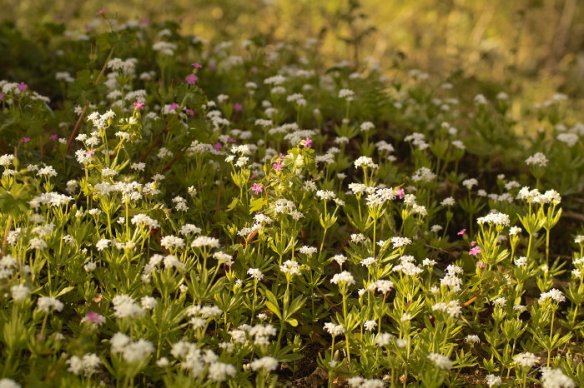 It looks it’s best just now, and whilst lasting for only a year seems to have the odd habit of overwintering with evergreen shiny green leaves and bright red stems before flowering and setting seed in the summer. But perhaps many would view this relative of Herb Robert as a weed? More exciting was finding a couple of seedlings which I didn’t recognize growing close to a tender Eupatorium longifolium from Mexico. The mother plant died in the winter 2 years ago, but I kept the small plants alive in our unheated greenhouse this last winter and will now see if they are of a slightly tougher constitution.

The above 2 photos show the huge number of foxglove seedlings which still emerge every spring, 4 years after starting work on this part of the garden, and after umpteen weeding sessions. Frost loosens the soil and exposes a new cohort of seeds. What fecundity! But occasionally you find a gem amongst them. Lower right of the bottom picture is an Omphalodes cappadocica seedling.

But the other thing to say about our weeding approach is that we don’t hoe at all – I reckon this is a recipe for regularly bringing up a new population of weed seed from the huge subterranean seed bank that is hiding beneath soil level. Much better to gradually achieve total groundcover with plant layers.

But enough of weeds, when there’s so much blossom around. Just a spectacular spring for many flowering plants, though not for us with Camellias – barely a single blossom, perhaps because of the severe winter or maybe the very dry early part of the year last spring, which seems to be being repeated just now. 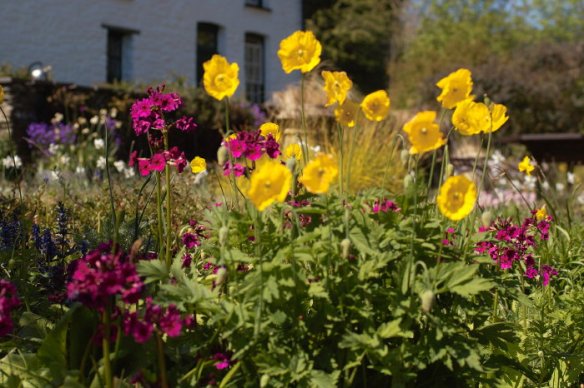 The downside to this exuberance of blossom is that it isn’t lasting all that long, a point picked up in recent article I read on the spectacular Wisteria displays in Cambridge this year. The head gardener of a college said that it was 2 weeks early, but wouldn’t last as long as normal. I’m sure that a big part of the reason for this is that in this glorious dry sunny spell the speed of pollination of any flower is much faster than normal, because there are more insects about, and that once a flower has been pollinated, its whole reason for being is satisfied, and the next important phase of seed production takes over. So ditch the delicate insect attracting bits and concentrate on growing to secure your plant’s future generations. Indeed with last year’s long cold spring, I noticed how the flowers of many wild and cultivated plants lasted for weeks and weeks – there simply weren’t enough pollinators about to fertilise the flowers.

With our apple blossom still looking great over the last week, I thought I’d spend an hour or so with the camera down by the trees, seeing just what was visiting the flowers. Initially there didn’t seem to be huge numbers of insects, but over the longer period a surprising variety were seen, and a number are shown below. 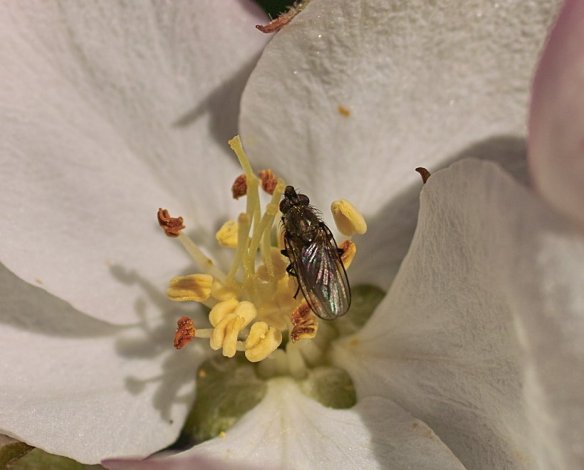 So who needs honeybees in an orchard when you have all these visiting apple blossom in an hour? I started thinking about how many flowers there might be in a little orchard like this. It seems 6 or 7 flowers on average per cluster, perhaps 150 flower clusters per tree on the spirally trained trees, many more on the fewer standard trees, and let’s say 50 trees. Then each flower will have to be visited at least once, but in practice many more times, let’s say for argument’s sake 5 times and since the flowers on an individual tree open in a staggered way, the tree has open blossom for perhaps 21 days maximum. So I make that about a quarter of a million insect to flower visits over the blossom period in this small orchard space (do check the maths here, since I did it on a Post it late in the evening). The other interesting thing gleaned from watching individual insects on blooms was how their habits varied. The couple of honeybees I watched were pretty methodical and spent 3 to 4 seconds per flower. Bumblebees were a bit faster and flightier, but the slowest, most methodical, and most obviously covered in pollen were the solitary mining bees, and masonry bee. These spent up to 20 seconds in a single flower before walking into the next flower in a cluster. But if we averaged the visits at 10 seconds for 10 hours a day for 21 days, a single insect would clock up about 75,000 flower visits, so only 4 insects could achieve the total number of insect-flower visits estimated above. Obviously no single insect will work so continuously though the bumblebees will work from almost dawn until dusk (longer than 10 hours at this time of year). What this little exercise seems to show is that with even just the number of different insects photographed here in about an hour, on a few trees, it is entirely feasible to expect very good, almost perfect pollination and fruit set in a year when flying conditions for insects are OK as they have been to date – i.e. dry, warm and not excessively windy. Some interesting work was carried out on this subject at the now closed Long Ashton research centre. It was shown that from the point of view of pollen transfer, bumblebees and solitary mining bees were much more effective than honeybees, which in turn were more efficient than smoother bodied flies. The other interesting point which I’d already reflected and acted on after reading Joy Larkom’s book on vegetable growing, was that by putting up wind breaks around an orchard, the number of pollinating insects found could increase by as much as 300%. All of this is a bit academic this year. There will be such a good level of pollination, that barring late frost issues, most of the tiny fruit will either be dropped by the natural June ‘Drop’ (maybe this year in May), when the tree naturally sheds excess fruit, or need to be manually thinned to prevent over-cropping. There certainly won’t be a potential shortage. But it does show how nature often has huge spare capacity in a system to ensure success and resilience. None of the paring to the bone, and “Just In Time” mentality of much current business manufacturing policy. Finally I shall introduce for the first time to the blog the Gelli version of a home-built vertical top bar bee hive. Made from sections of logs which I’ve hollowed out with a chainsaw, it was first erected last April, in the hope of encouraging a swarm of local honeybees to take up residence. Scout bee 24/05/10 inspecting the Mk1 Gelli home made hive.

Whilst it had visits from scout bees on 2 occasions through the summer, each lasting for 3 or 4 days, permanent residence wasn’t taken up, and I felt a huge sense of rejection! Thinking about it a bit more, I decided that perhaps the bees had not been allowed to swarm by a diligent beekeeper removing queen cells; or maybe they had swarmed and the swarm had been captured before making it to my ‘Des. Res’ hive. However I read recently that these scout bees have no long-term memory, and don’t locate suitable future hives in advance and store the information for later. Basically they scout just as the hive is about to swarm, or just after swarming and then will select the most acceptable of the vetted sites within an area – ideally over 250 metres from the base hive. This confirmed my initial thought that my potential hive had been rejected as unsuitable for some reason obvious to the scout bees. So it’s now been upgraded with an extra hollowed out section added, and been relocated from a semi shaded area to one in full sun, after watching a video clip from America on where to locate a top bar beehive. I’ve also sealed some of the many cracks between the joins of the logs with clay from our stream.

Beautiful it is not. And I would find it very difficult to harvest any honey from it, but if it works, it will be a first step in simple, low-cost beekeeping, and as with saving one’s own seed strain suited to local conditions, I would much prefer a bee strain suited to the rigours of upland Wales. It shouldn’t be too long a wait. Last year the first visits by scout bees were around May 20th. 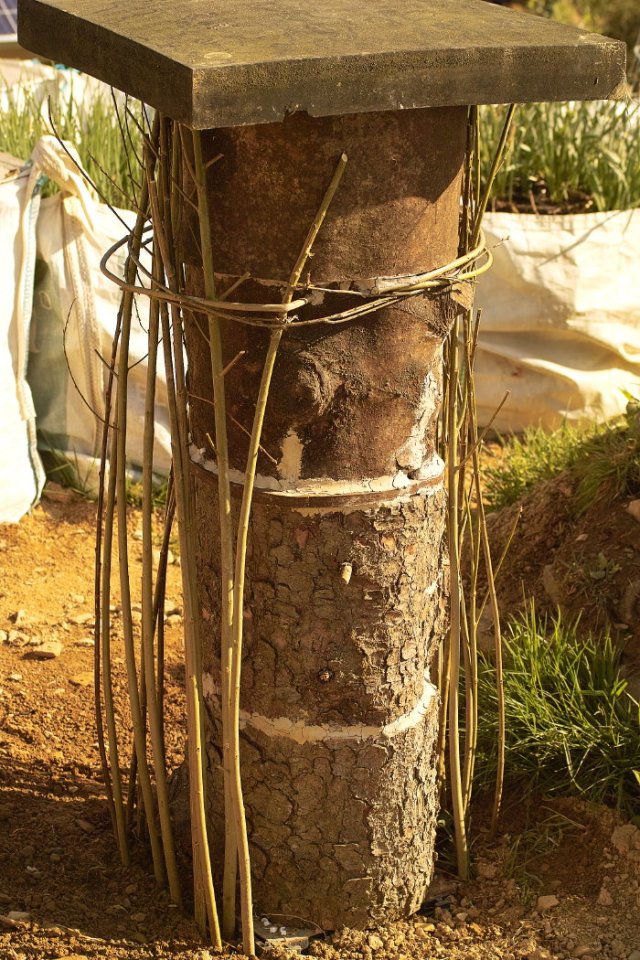 Finally a rare pause to take in the view from the Big bag cold frame surround didn’t last long when I turned to glance at the now flowering broad beans, and spotted this Common Lizard basking on the wall behind the bags, so dashed inside for the camera. I didn’t need to rush, it was patiently photogenic.

Basking Common Lizard behind the Big Bags of broadbeans

5 thoughts on “Weeding, Blossoming and Swarming”