There was a certain satisfaction in managing to eat our first forced rhubarb of the year, roasted simply in the oven with orange juice and sugar, 4 days before Jill Archer mentioned that it was too soon for her to prepare a rhubarb crumble for her grandchildren in Ambridge. This was about 4 weeks ago, but I mention it now, because it was early growing experiences with rhubarb at Gelli, which led me to developing our matrix fruit and vegetable garden. 3 crowns of a dark red stemmed variety, whose name I sadly didn’t record, were bought and planted as suggested. And sulked. And over 18 months 2 crowns died completely. In desperation I lifted the remaining weak crown and plonked it inside an old car tyre which was lying around the property. Within 6 weeks the plant was transformed, with luxuriant leaves and growth.

The rhubarb 4 weeks after the first forced stems. The extra tyres will be removed shortly, buy add extra warmth for early season growth.

This prompted thoughts about what the key factors for plant growth down here were, and I reckoned that warmer deeper soil, and better drainage, particularly in the early weeks of the growing season resulted from raising the crown in the tyre, and allowed it to thrive. I’d used wood and raised beds in Bristol successfully, but figured that wood would have a limited life down here, and not give the added heat that the tyre wall gave for faster growth. Further thought led to developing my fruit growing system for apples and pears, where I train the tree around a pillar of tyres which have been 3/4 filled with loose stones and rubble. 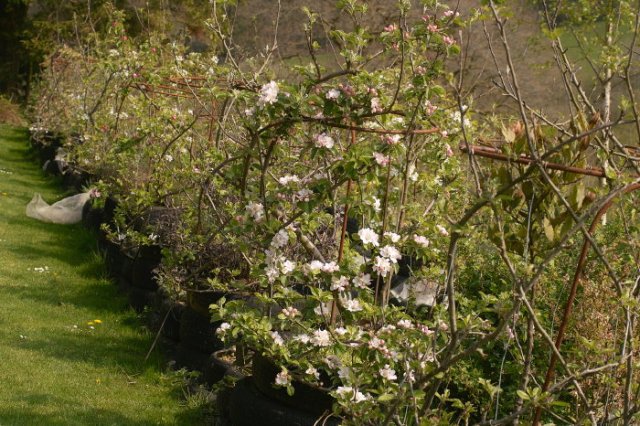 Row 1 of the fruit trees. All different varieties, mainly apples, but 3 pears – there were 4 but 1 did not survive

The tree is planted outside the tyre, but the free drainage inside means herbs, lilies, Agapanthus, etc. thrive in the sparse soil on top of this stone. I use a simple iron support with galvanized wires to continue training the spiral form when the tree has grown beyond the height of the tyres.

All but one of the 50 or so different varieties that I’m growing have fruited, but of course some seem more vigorous than others. As the trees have matured, other benefits have emerged from using this system – it’s pretty easy to prune, the spiral growth promotes fruit spur production, and they’re easy to spray with seaweed solution which I try to do at least fortnightly as a means of promoting healthy leaf growth and limiting fungal diseases which are inevitable in our wet climate. Also should a late frost threaten, the heat sink effect of the stone filled tyres affords some added warmth, as well as enabling a sheet or enviromesh to be easily thrown over as extra protection. Right now the pear blossom is half out, and the apples are starting to shown a range from no buds to open pink. Growing a wide variety also highlights subtle blossom differences, and the most beautiful has to be Brownlees Russet, which also is a very tasty late/mid dessert apple, although not the most vigorous variety.

An issue in most years which won’t apply after the stunning sunny and warm spring which we’ve enjoyed so far, is that particularly with the earlier pear blossom, there may be few pollinating insects about when the flowers open. For the last 2 years, I’ve used a paintbrush to hand pollinate, and again this is feasible with this form of trained tree, but this leads me back to some interesting information I’ve found on bees after posing the question about whether the honeybees which have visited our snowdrops and hellebores were just a pollen collecting subgroup of worker bees.

Another first at Gelli this year. A honeybee visits the flowers of our reliable and early flowering Pear Louise Bonne de Jersey

Apparently bees do indeed subdivide tasks in this way, with some collecting pollen, and others nectar. The most striking example I found on this subject was the hybrid sunflower seed industry in California, where alternate rows of male sunflowers (producing pollen and no nectar) and female sunflowers (producing nectar and no pollen), are sown in typical agribusiness monoculture. The farmers then find that they get poor pollination, so require honeybee hives to get good pollination and seed production. Trouble is that the pollen collecting worker bees tend just to visit the pollen bearing male rows of flowers, and not the alternate rows of female flowers, so that poor seed set results. A couple of researchers discovered that the wild and indigenous sunflower bees, whilst not being so numerous in numbers, are more diverse in their habits and so will visit both male and female flowers, and moreover in the process will disturb and harry the honeybees and so make them fly into the next row. As a consequence, pollination and seed production were dramatically higher in fields or farms where the habitat encouraged these native sunflower bees to co-exist with mainly shipped in honeybee colonies.

Of course all this was gleaned as a result of googling, which is a great resource living where we do, but quite dependent on what you type into the search bar. Having noticed this week that the only insect which seemed to be pollinating our gooseberry flowers were large and quite aggressive wasps (possibly wood wasps), I thought I’d see what information I could find. I consciously left out, initially, wasps from the google search, just typing in ” gooseberry flower pollination”. 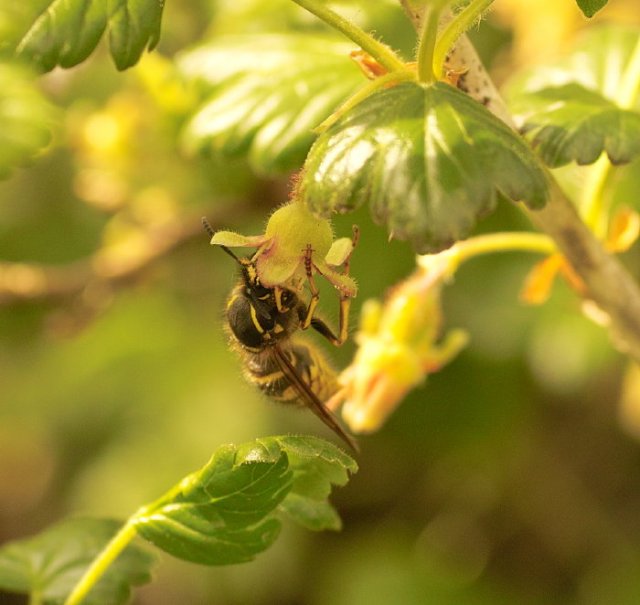 As a consequence I ended up at on the website of a Dutch site (Koppert), which is a global player in providing “natural pollination solutions” for commercial growers. Basically you can choose from a couple of species of bumble bee, which are supplied as disposable plastic hives complete with queen, workers and in-built sugar solution supply. Why the sugar solution? Not just to keep the bees going on the journey in the post, but because they’re mainly directed at greenhouse growers of tomatoes. It was quite recently discovered that bumble bees are effective ‘buzz pollinators’ of tomato flowers which like potatoes, and Dodecatheon flowers have unusual anthers where the pollen is held internally within a tube, and requires shaking for the individual pollen grains to fall out, unlike most flowers where the pollen grains are external on the anther surface.

Of course the tomato, in its original wild environment, had a bee which did this buzz pollination effectively. Honeybees can’t do this shaking, and anyway the tomato flower produces no nectar. But bumble bees can achieve this “buzz pollination”, by grabbing the flower’s hidden stigma, and vibrating their flight muscles. The pollen is shaken off onto the bee’s electrostatically charged abdominal hairs, and from there may be transferred to another flower, or collected for the bees’ use as a larval food source. But the problem is that in a monoculture of commercial tomatoes (probably I guess mainly grown hydroponically), there is no nectar to sustain the bees – hence the sugar solution provided in the box. What I found sadly depressing was the corporate language that went with this, referring to this colony of highly efficient creatures as a (my insert – ‘disposable’) “product”. They even supply a colony with a radio transmitter on it which allows the grower to remotely regulate entrance and exit from the hive, so that bees can be only allowed to fly at the right time of day to find the flower’s female organs receptive, after allowing for the artificial light regime often employed within such greenhouses particularly during  the winter months. And all so we can enjoy year round fresh tomatoes.

And if bees aren’t your thing what about a kilo of greenbottle pupa (circa 30,000) to pollinate all those tricksy little flowers which other insects won’t visit? This is another Koppert product which you can buy! I’ve noticed in previous years how greenbottles do visit lots of smaller flowers in the garden, and yesterday photographed these distinctive flies which are very active pollinators on Aubrieta flowers. But what is the ‘goo’ on the second photo? Nectar, or a mix of saliva and nectar, stuck around the proboscis ? Or something else? I often see things on a digital photo which I couldn’t pick up with the naked eye.

What is that stuck around the proboscis ?

Whilst I’m not averse to the concept of biological controls being better than agrichemicals ones, I find the solutions that industry comes up with to deal with issues created by unnatural systems of management could come straight from the pages of 1984.

All this though has a practical slant for me, since for the first time I have a greenhouse, in which I hope to grow some tomatoes this year. So pollination and fruit set is clearly going to be an issue. Do I go out and shake the plants? Or use a vibrator? Both were favoured methods before some bright spark put the bumble bees in the boxes. Or do I rely on the amazingly numerous and varied bumble bee population which we have here, and somehow persuade them into the greenhouse. I haven’t yet mentioned that a lovely research paper from Guelph University in Canada mentions that actually bumble bees don’t even like the smell of tomato flowers. So perhaps pots of Borage and Stachys officinalis, which are favoured bee flowers around in our garden at the time of tomato flowering, will lure some unsuspecting bees in to work their magic, leaving brown chew marks on each visited flower as a tell-tale calling card of their visit.

Yesterday, the 19th, was the hottest day of the year so far, and also the day when we both heard the first cuckoo of the year. Not close by, but today as I filmed a deep red sunrise, it was in the valley, adding to the symphony of early bird song. Perhaps the sparrow hawk may have temporarily shifted its hunting ground? And as I type this up with the Velux open to enjoy early morning sounds and smells, another Pied Wagtail pirouettes at the gap, between glass and slates about 5 feet from me, probably looking for insects on the lichen on the roof, but a reminder of how there’s not much time for being in mourning. Life has to be got on with.

April 19 th . The first cuckoo of the year, and a pause for the less sartorial female Orange-tip butterfly on a clump of Bluebell flowers

1 thought on “Rhubarb, Buzzing, Googling, and the First Cuckoo”