No sooner does the Met Office confirm from its monthly summary, that once again we’ve had an exceptional end to March in the UK, than the weather has flipped, some welcome rain has arrived, and we’re enjoying a bit of a breather day inside. 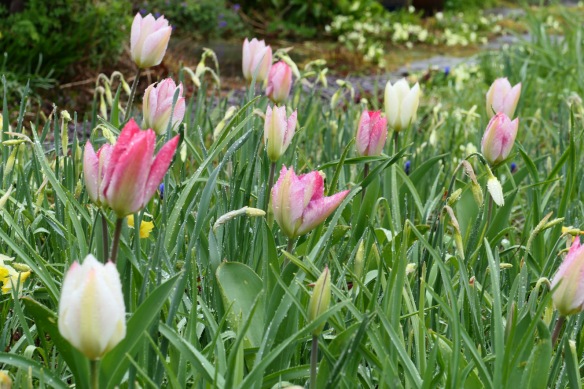 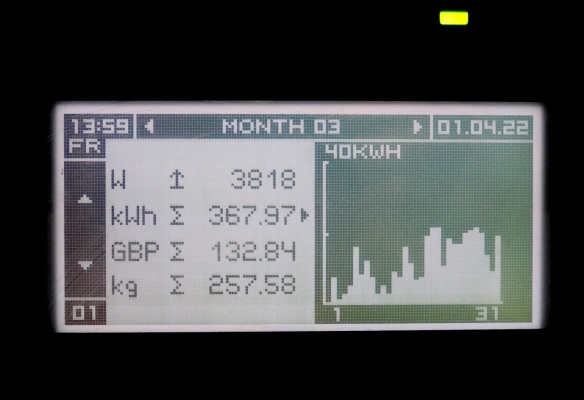 The PV inverter read out for March tells part of the story. After a mainly grey and drizzly start, a high pressure system built, and for 2 weeks we enjoyed nearly wall to wall sunshine, and without serious overnight frost. Until the very end of the month and into April, when the night of the 2nd/3rd saw temperatures dropping to minus 7. Nearly as low as anything we plumbed through the whole of the winter.

All the lovely dry weather allowed us to take down and process half a dozen ash trees we’d planted in a small copse down the hill, and this will now allow the Zelkovas and a couple of Northofagus, and maples to grow even larger with a little more space. We even managed to log up and extract all the logs, given how dry the fields had become. 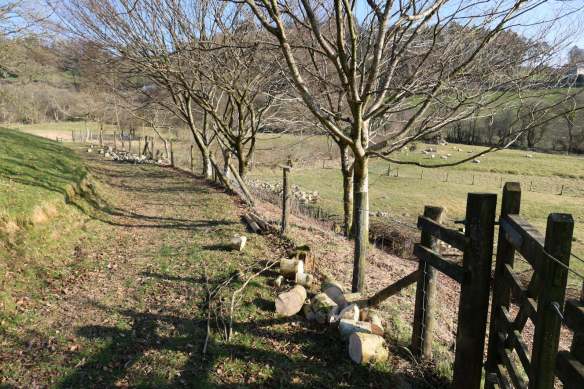 With lambing pending, I finished topping back the Purple moor-grass surrounding the upper pond. 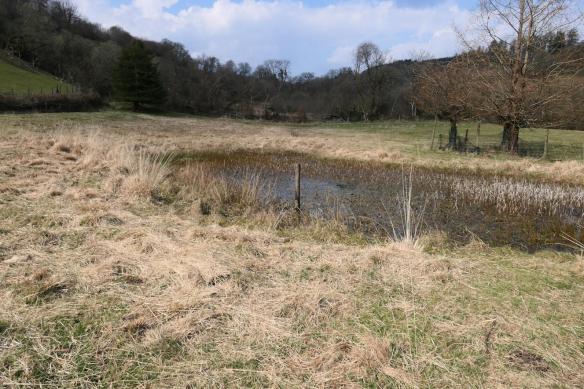 This Purple moor-grass foliage, Molinia caerulea, has proved to be an invaluable resource, making wonderful soft dry bedding compared with imported straw which tends to be the default material used locally. This surprisingly small area yielded nearly 20 big bags of material which should easily cover us for a couple of years. Cutting it at this time of the year, in these conditions means most of the material is already fairly dry, and a couple of days of sunshine and a brisk wind finishes it off.

There have never been as many viable frog tadpoles in the pond, having managed to escape any ice damage to the frogspawn in February or early March. I’m guessing the fields will be awash with froglets in another couple of months, and around the garden 4 common lizards, Zootoca vivipara, have been spotted in different areas, basking in late afternoon sunshine. 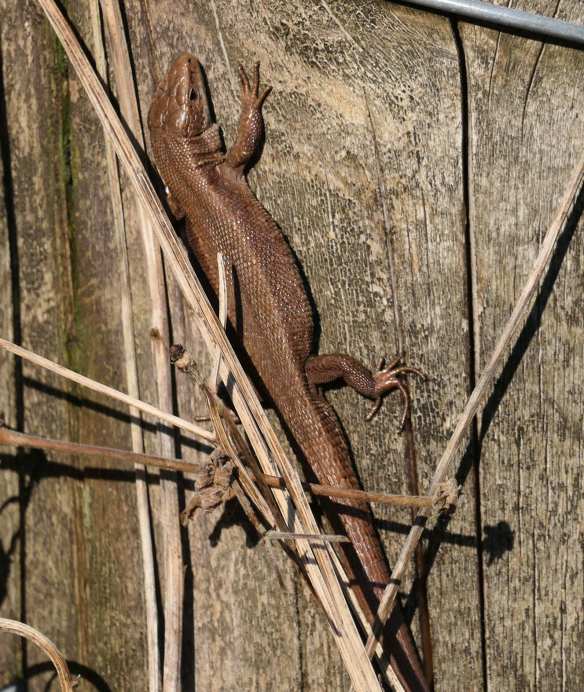 The errant wagtail I featured last time has continued to attack any wing mirror around – in the end a double sheet has proved to be the only way of keeping it off our car.

But undeterred it’s switched attention to our small gable end windows, and now regularly lands on the slate cill, before launching itself like a jack in the box, in a series of 8 to 10 boings to the upper window panes, before pausing – presumably to recharge its batteries, after such energetic activity. 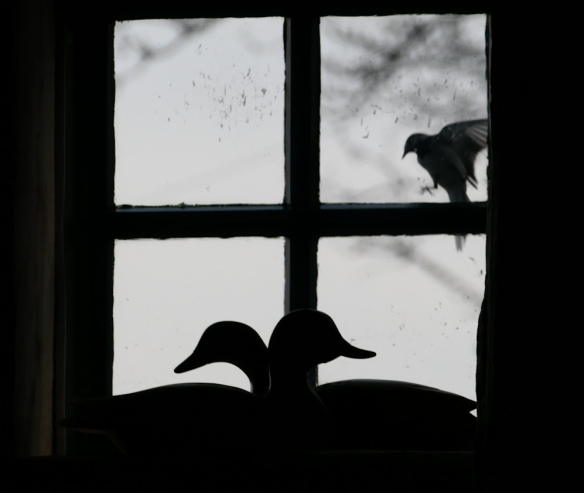 The stills are quite fun, but the video, included in my second ‘harmonies’ video below, is even more special.

The last time we had ewes lambing was 4 years ago, and on that occasion, we had our most difficult lambing ever, which I wrote about here. So there was an anxious wait, and a rising sense of foreboding when our first ewe began “preparing”. In the end Cilla picked a good spot in the base of a dry ditch and the lee of a bank, so out of the brisk wind, which by now had switched to a chilly Northerly direction. However, she did begin readying herself around midday, and we had no problems encouraging her inside to one of the pens.

But then nothing happened. All through the rest of the day and following early morning, although she was clearly uncomfortable, there were no obvious abdominal contractions or evidence of progress. In the end, after an initial examination had shown no lamb presented, her waters broke, and after a further couple of hours without obvious straining another examination revealed a single tiny hoof alongside a large head, all barely engaged in the pelvic canal.

As a frankly all too inexperienced shepherd, burdened with too many thoughts about where it might all end up, I set too, and thank goodness Cilla is one of our best behaved ewes. Considerable manipulation and effort eventually shifted the foreleg and head beyond the vulva, and at this point, the lamb could be forcibly arced out and onto the dry bedding. No tongue suckling was obvious throughout this process, but within a second or two, the first movement and spasmed gulp of air showed all was not lost, and a quick rub down with a towel worked wonders. 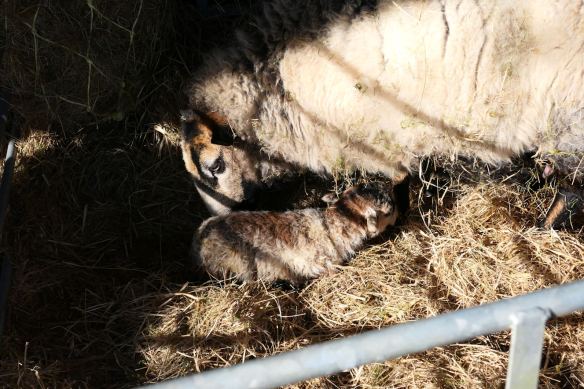 Cilla took over, although for the first time ever with one of our ewes, had a strange habit of violently pawing, or rather ‘hoofing’ the little lamb, raking it physically backwards. We have no idea why.

We knew there’d be a second lamb, and often this arrives in double quick time with few problems. Not so however with Cilla, and a second manipulation was needed as lamb number 2 had both feet held back behind the head, so again there was no way out without a bit of anatomical re-arrangement and firm heaving. Thank goodness that both lambs and ewes have physically tolerant body structures. For the many readers, I guess, who’ve never experienced this, it’s difficult to communicate how physically hard one has to pull on the relevant tissues to achieve a result. No scope for pussyfooting around, I’m afraid, and it always seems to me more than the body structures will cope with. However, problem solved, and the smaller sibling soon joined his brother.

So we celebrated April 1st with both frosts and lambs, in glorious sunshine as the warming sun brought the garden to life again. 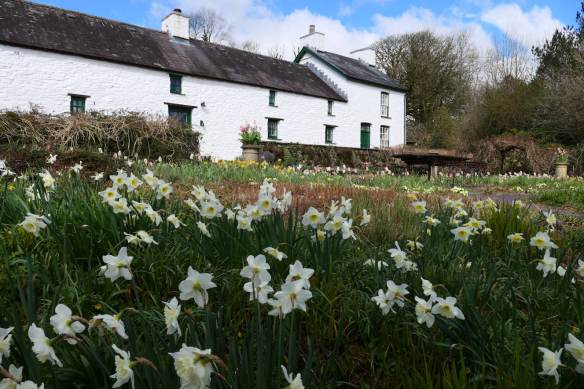 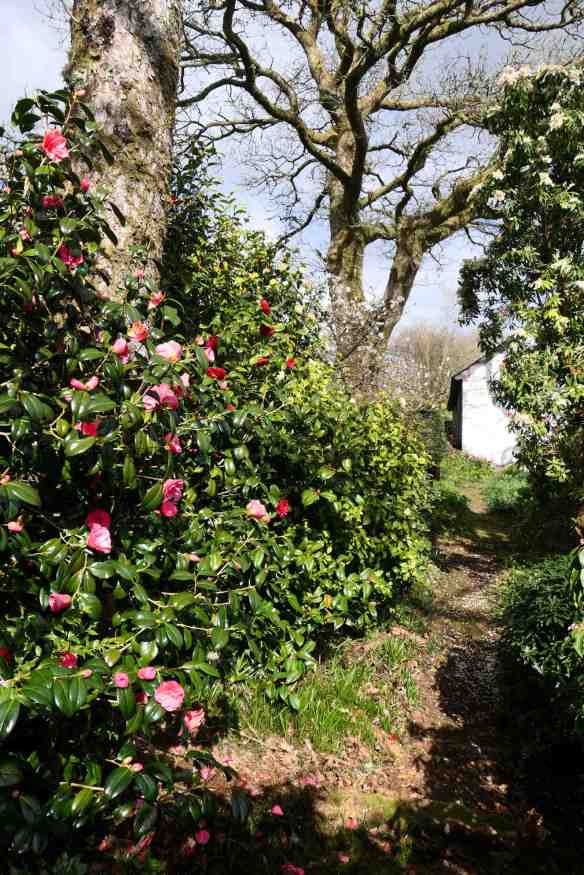 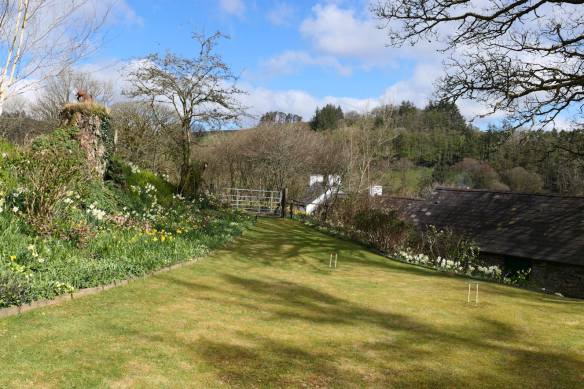 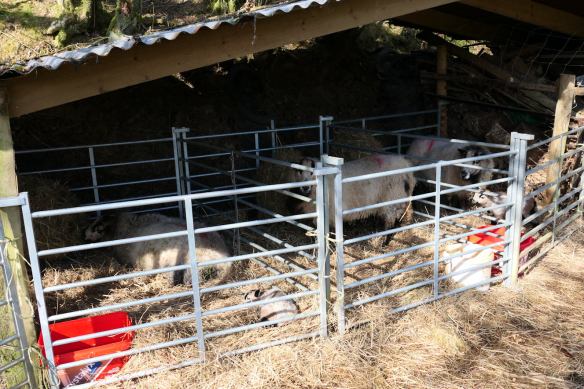 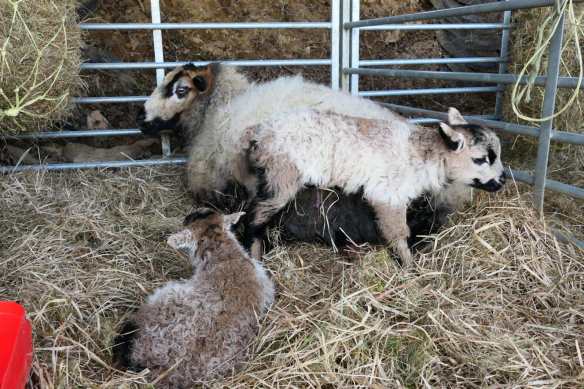 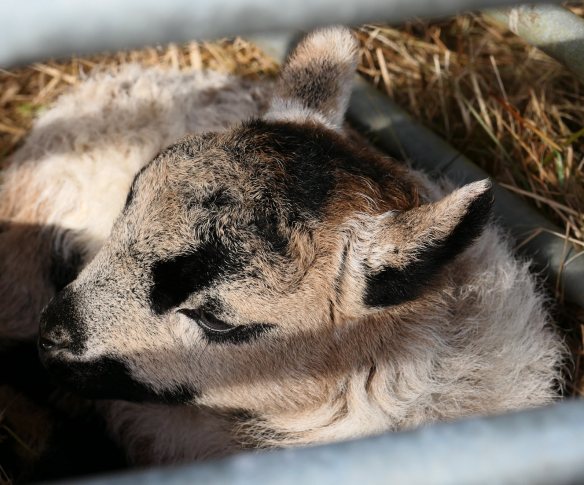 As is our way, we name our lambs after daffodil cultivars, and this year we’ve moved on to the letter ‘i’, so the first two lambs are now known as ‘Ice Follies’ and ‘Ice Wings’. Or Follies and Wings for convenience. Shortly joined, the following day, by our first ewe lamb ‘Itzim’.

We don’t yet have this daffodil, so will add it to the bulb order this year, and probably plant it out in the Malus and Sorbus copse, where many of our previous ‘lamb themed daffodils’ are slowly establishing.

With so much to take in and think about, it was the first year for decades that we forgot all about April fools, until the end of the day.

The garden entered April with 3 viable honeybee colonies – an increase of 1 from last year. Since all were essentially new colonies from last May (2 caught and re-homed swarms, and one taking over with a new queen in the hive from which the 4 swarms emerged), it seems that our essentially minimal intervention bees – very limited honey harvest, no treatments and no feeding – are increasing in numbers in a gradual way, which matches Thomas Seeley’s studies of what seems to happen with ‘wild’ or ‘native’ honey bee populations and colonies.

Since we’re blessed with a wonderful array of native wildflowers and suitable tree and shrub forage for honeybees locally, but only really from April onwards, one of my main interests is to always have around 3 hives which are active during winter/very early spring, so that our spring bulbs provide pollen and nectar opportunities for them. These flowers should also then get pollinated and achieve good seed set in return. The final 3 hives/boxes which are empty this spring, have now all been repositioned, and/or re-purposed with greater roof insulation and optional small top entrances.

All these repurposed, empty hives will stay blocked up and closed until we reach the early swarm season towards the end of April, when I’ll mark the entrances with my home made wax/olive oil/ citronella and geraniol mix to try to alert any local scout bees from swarms to their presence as possible future colony cavities.

Although I’ll need to keep an eye open for tree wasps, Dolichovespula sylvestris, and tree bumblebees, Bombus hypnorum, which both seem to spot their potential as good nesting sites too, and are already actively exploring some of them.

In addition, I obviously need to add birds as a potential problem. 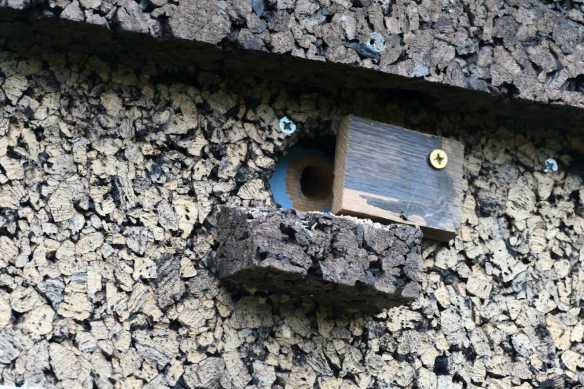 I just nipped out to take a few extra photos of the three hives to include here, having finished work on them just yesterday, to discover that something has enlarged the hole in the cork which I’d carefully covered and closed with my door yesterday, and even chipped away at the paint and wood of the inner box layer. My guess is that this degree of damage is too great to have been caused by insects in just a day.

Some quick thinking has meant a small slate being pushed into place to obstruct access. Will this survive further attack ? Let’s wait and see.

Finally, the weather, garden and light were conducive to much video recording over the last 2 – 3 weeks, so here’s another video compilation in my ‘Harmonies’ series which I hope you enjoy. If the news all gets a bit grim, then I’d suggest you sit down and switch off for few minutes, and enjoy the musical backing of 3 Schubert impromptus, played by Italian pianist Chiara Bertoglio

And available thanks to her recordings on the Musopen site.

8 thoughts on “April Frosts and Fools; Harmonies No.2”