I’ve just bought a new external Røde VideoMic NTG microphone to link into my standard Lumix FZ 1000 bridge camera, to enable me to capture sound better without the machinery rumble which comes from the camera’s on board mike, when using video mode. I was really pleased with the sounds I recorded in the last 2 days using this, as our bees seized a brief, slightly warmer interlude to forage, and produced the short You Tube compilation, below.

Only to discover that today is apparently World Bee Day 2021.

So this is being rushed out as a rare, brief, post.

So for all you bee lovers, who’ve never heard the sounds and sights of busy happy honey bees up close, and working incredibly hard, have a look below, but you really need to watch it in HD (you can change this in your You Tube settings box). This truly is one of nature’s marvels.

April 2021 has been record breakingly cold, dry and sunny here. Then May 2021 has been, so far, record breakingly cold, wet and windy, with many night frosts. The 3 honeybee colonies shown here have all survived the long winter of 20/21 with no treatments or artificial feeding. The ‘hives’ (one’s an old butterchurn, one’s a simple home made double box, one’s a conventional ‘National’ hive, but all have been modified and insulated with cork or bubble wrap) are rarely if ever opened.

I prefer to observe the bees closely from outside, and leave them undisturbed. These clips were all taken around 1 pm on May 17th and show dramatically different levels of foraging and drone activity, on a day of sunshine, cloud, Northwesterly winds and cool temperatures, peaking around 12 degrees C. (But with perceived temperatures nearer 9 degrees C. Air pressure 1008 hPa, and humidity of 80%  – data courtesy of Ventusky.com).

So certainly not warm.

There are no commercial crops like oil seed rape nearby in our remote upland, pasture and woodland landscape, but sycamores and Malus are just beginning to flower, and there is much yellow and orange pollen being taken in from gorse, willow and dandelions.

The busiest hive’s bees now have 5 smaller ‘super’ boxes to inhabit and fill, as well as one deeper, brood box. The other two hives have a fixed, and much more limited capacity, so have no need to be working as hard. There are also differences in the bee’s genetic mix, as evidenced by the mainly dark/black bees in the last 2 smaller colonies, and possibly the ages of the queen bee in each hive.

So it’s not really a case of languishing or flourishing, just coping with their different circumstances. Each colony is about 50 metres from each other. You can see the many, much larger eyed drones, struggling to leave the busy hive, against the incoming flow of laden bees. They’re flying out to, and back from, the special ‘aerial drone congregation areas‘, where they all meet up with drones from other colonies nearby, to attempt to mate with any virgin queen bees on their nuptial flight, who’ve also flown to this small mating zone. If successful with their brief, in-flight mating attempt, the drones are permanently and instantly fatally damaged, and fall to the ground and die. 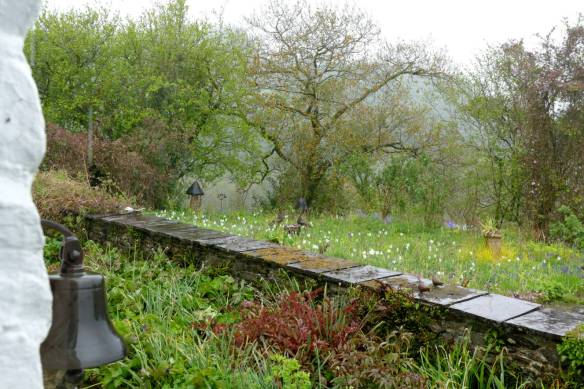 Today the bees will be working hard inside their hives all day, making the most of their provisions – they have 48 hours of incessant rain and strong winds, with nearly constant rain for the next 5 days, to look forward to. 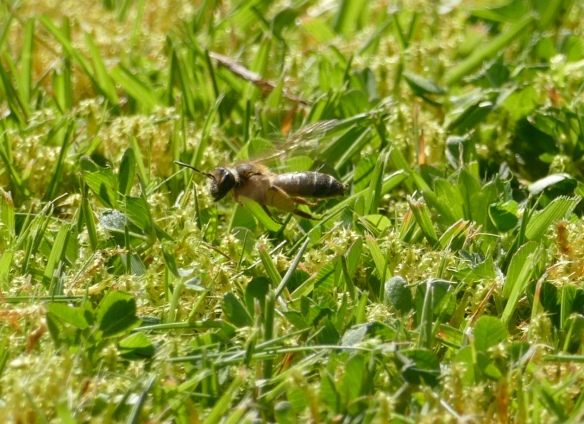 Finally, I’m still trying to identify this species of Andrena, a solitary mining bee, which I spent ages trying to photograph, pressed belly down on the turf, as a group of 3 of them whizzed around our crazy mossy croquet lawn as I was whizzing round, cutting the ‘grass’. The bees seemed disturbed by this and were struggling a little to find the entrances now, to their underground nest mines. There are 68 different species which have been found in the UK!

Nomad bees, of which there are 34 species in the UK, are all small, cleptoparasitic bees. They locate the mines of other solitary bee species, like the Andrena above, enter, and lay their own egg in the uncapped underground cell of the Andrena. The emerged nomad grub destroys the host’s egg or larva with its strong mandibles, and then feeds on the food stores laid down in the nest by the adult Andrena bee.

So, this nomad would probably find its way to the mossy croquet lawn, about 20 yards away, and locate the bee’s mines. The known hosts for this bee are A. scotica, A. trimmerana, and possibly,

Which one is she?

For the most impressive photos and knowledge about the vast range of bees in the UK, do look at Steven Falk’s amazing website and Flick site.