Who were the real stars of last Thursday? The wonderful enthusiasm and communication skills of our speaker? The gorgeous late autumnal light? Our massed Persicaria vaccinifolia and Saxifrage fortunei?

No, on reflection, I’ve come to the conclusion that whilst all of these were critical to such a successful day, the really important feature was the mix of gardeners who’d travelled to this remote part of the UK to learn and share with Dr. Noel Kingsbury and indeed each other. Several had driven over 100 miles, and so had to make more than a day of it. One of our happy band, a garden designer from Pennsylvania had even flown over from the USA to take part – and built a family holiday around this event. There was a warmth, enthusiasm and good humour to the whole day, which I think everyone benefited from.

Such is the high regard for Noel’s pretty unique blend of knowledge, not just of gardens and their design, but more crucially of plant growth, ecology and their interactions – something one reads or hears about very rarely in the mainstream garden media. And a key subject in assessing how plants will perform in a garden setting over the medium to long term. As well as how much intervention is likely to be necessary to achieve one’s desired aims. 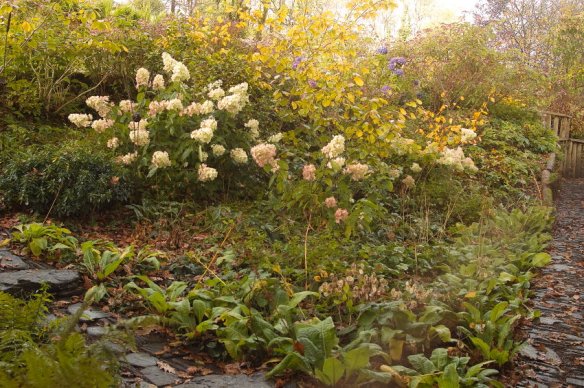 When we’d thought about volunteering to host such an event we’d (typically) probably not thought as much as we should about how we would have coped in the atrocious weather that can sometimes hit around now. Although the day before was wet and windy, and played havoc with my attempts to keep paths leaf free, Thursday dawned dry and by the time the first folk were arriving, blue sky was beginning to appear.

Noel kicked off with a discussion considering an imaginary plot of bare soil, and, left un- managed, how it would become colonised over 1, 2, 3, 5,10, 50 and 100 years. An intriguing way of thinking about firstly what natural trends we are seeking to combat or control in our role as garden designers and managers. ( A hint of the default 100 year dominant landscape plant in this part of the world  – a seedling oak at the base of a Japanese Maple, below)…

Secondly of what strategies plants have to out compete or simply survive amongst their neighbours, and indeed thirdly the likely futility over the very long term (without generational garden management) of combating these natural ecological trends of plant succession.

And very helpful ideas for any gardeners like us, who are facing the inevitable slowing down that comes with ageing, and want to try the steer the garden into a lower maintenance phase, without losing its inherent appeal. (How many different plant species inhabit the small section of ground above? How much weeding is necessary here? And what does it look like in April or May? See the end of post for more). 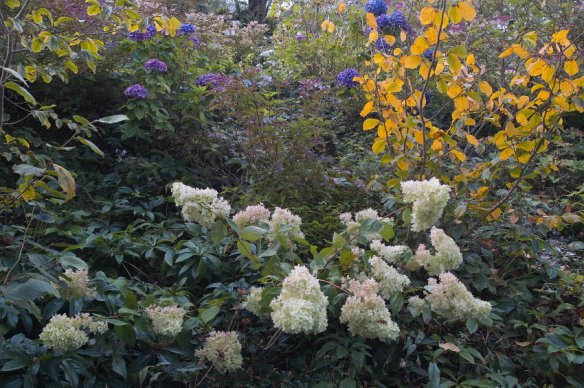 I remember reading a letter in the RHS Garden magazine recently from a gardener nearing the point of having to let go of a garden lovingly created over 20 years, and then enjoyed for another 10, but now beginning to become too much to manage. When to let go? Perhaps we need to move into more of an enjoyment stage after 20 years of creating, and stop fiddling! Not that we haven’t enjoyed the journey so far…

Group discussions followed together with a good power point talk to flesh out more about examples of different types of ‘perennials’. Just how perennial they might be, and how by examining growth and flowering habits gardeners can work this out for themselves, by considering taking the rabbit’s eye view of what the plant looks like at ground level. (Clonal Asters growing through Saxifrage below)…

By lunchtime the weather was sufficiently sunny for many to take food outside to eat – pretty rare for us in late October, and later, the afternoon session took the form of a garden based walk looking at how we’ve used plants within the garden in a sometimes unique way based on the conditions which we have to deal with up here. Again we all learned much from Noel’s thoughts and ideas and group involvement. The day finished with more cakes and tea, before everyone headed home. 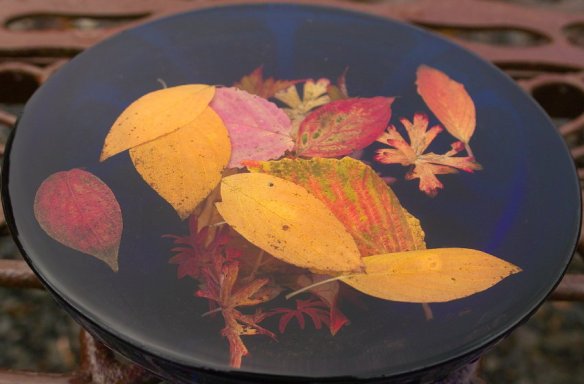 Keen to try to find out what visitors thought about the day, we were very grateful to everyone for filling out a simple end of event questionnaire. Only 1 other participant had ever been on a garden based workshop before, and everyone ranked the day as both excellent, and also excellent value for money (from excellent, good, average, disappointing). And it was great that as well as making it non profit making, we were still able to donate part of everyone’s fee as a garden entrance charge to the National Gardens Scheme charities.

Would we ever do it again? Well Noel has clearly led such workshops all over the world, and he would be a very difficult act to follow, such were his knowledge, teaching and communications skills. But it was such a success that maybe some similar event might happen again, perhaps at a different time of the year. 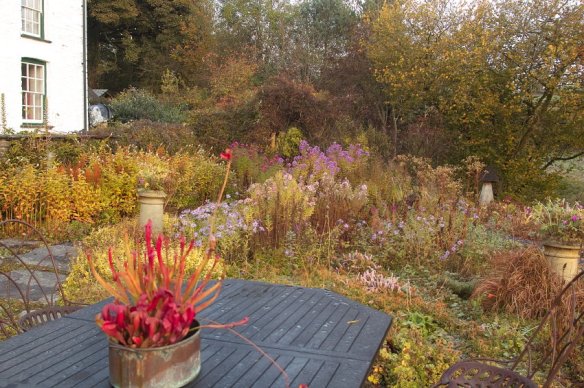 Not really linked to the above, though there was a certain sense of being under pressure in the build up to the workshop, I’ve often wondered about the processes involved in the extraordinary coiling of Cyclamen pedicels, after pollination of the flower has taken place, which drag the developing seed capsule back down to ground level. Though ‘drag’ is far too coarse a word for the finesse of this process.

And over the last couple of months this has been taking place time and time again, as the flowers of C. hederifolium add sparkle to many areas in the copse. 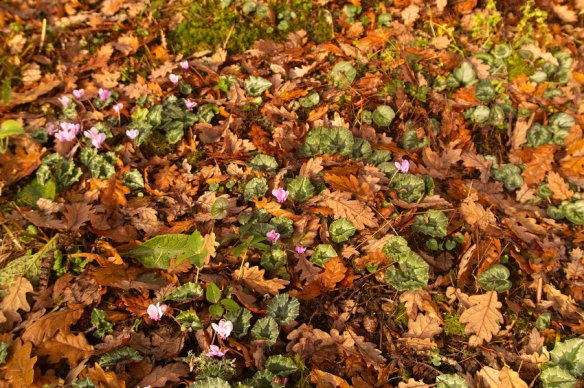 We’ve gradually worked out that the Cyclamen coexist really well beneath hybrid Hellebores (H.orientalis) if you are prepared to cut off the Hellebore foliage around the end of September/early October.

They also do well amongst our deciduous Azaleas, which tend to shed leaves quite early, but some raising of the canopy of these is necessary as the shrubs mature, since the lower branches have a habit of bending down to ground level and providing a bit too much shade for the Cyclamen flowers to be properly appreciated or for the plants to thrive.

But how do they manage it? I’d figured that it’s probably because of continual growth of the flower stem, or pedicel, after petal fall…

But in fact it’s much more complex, with a combination of sudden and rapid growth on the convex, initially outward facing side of the pedicel, combined with compression of cells on the concave, inward facing side. Frustratingly you have to pay to read the whole article, by McDonald et al, which I wasn’t prepared to do.

However in chasing this thread, I found a brilliant, though in places way over my head, review article on how plants manage to ‘move’ in spite of the constraints that having a rigid cellulose cell wall, (which really defines all plant life), imposes on them. Click here for more on..

“Vegetable Dynamicks”: The Role of Water in Plant Movements by Jacques Dumais and Yoel Forterre ¨

Even ‘ordinary’ plant cells maintain an internal pressure of about 5 bar (or 5 times ordinary atmospheric air pressure). This high turgor pressure is created by an osmotic gradient which tends to pull water inside the rigid cell wall. In guard cells, which control the opening of a plant’s breathing pores or stomata, pressures can be 8 times this high, or 40 times atmospheric air pressure!

Most of the movements which are described in the above review are the result of the changes in hydrostatic pressure within individual cells. And a comparative chart illustrates just how high such pressures can go – many times that of the pressure of air within a car tyre, for example. So that whilst animal cells, free from the rigidity of a cellulose frame have been able to develop muscle based proteins and strategies to deform, and alter cell size, and hence create very complex movement strategies, plants can nevertheless perform some dramatic and often sudden movements – think of the springing shut of a Venus Fly Trap – all achieved through hydrostatic pressure changes.

The other fascinating piece I discovered, and which will merit more investigation, is an entire book that can be accessed on line. Click here for the link. The title being Plant Evolution in the Mediterranean by John Thompson Montpelier. In particular go to page 122 for a discussion on the ecology of Mediterranean geophytes (bulbs), which have evolved to cope with the peculiar combination of summer drought and winter cold found in this type of climate. 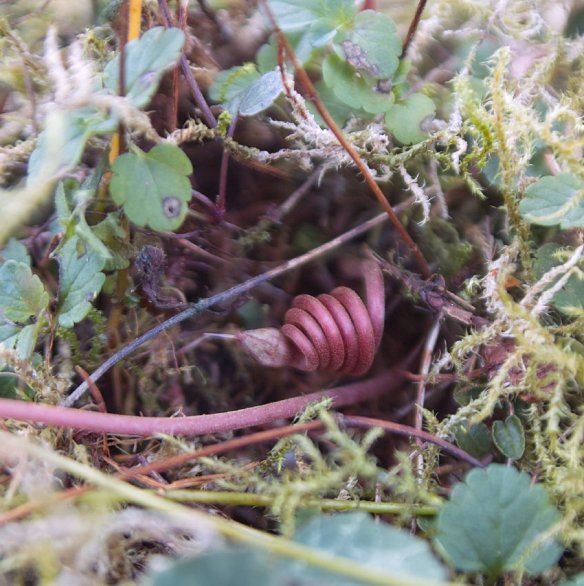 One of the credits in the preface is to a fellow scientist who first introduced Montpelier to carpets of wild C.hederifolium in flower. I vividly remember the first time we were impressed by these flowers – not in the wild, but in the since relocated Bristol Botanic Gardens, in its earlier location at Leigh Woods. Here the plants were happily flowering profusely at the very base of a mature Lebanese Cedar. Tubers/Corms were bought, and duly established in our Bristol garden and when we moved here permanently, some of these were brought with us – a handful of the plants which we thought worth moving. And which have become the parents of most of the C. hederifolium which we now have. 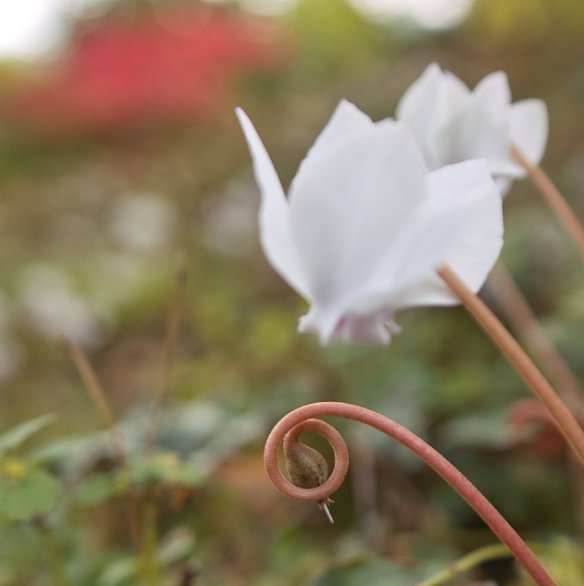 Some originals have grown to dinner plate sized tubers and whilst the flowering has perhaps dropped off a little in recent years, what a fantastic return from a simple plant which through much of our perennials’ growing season lies dormant. Biding its time, until the shed leaves of the canopy above, falling temperatures, and probably a bit more moisture at root level as the trees begin to shut down, are the cues for growth. 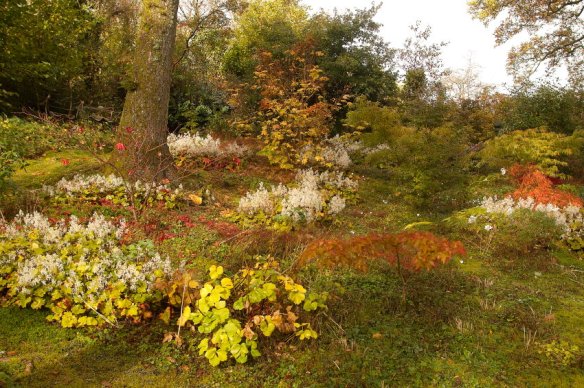 The day after the workshop, life returned to normal at Gelli Uchaf. 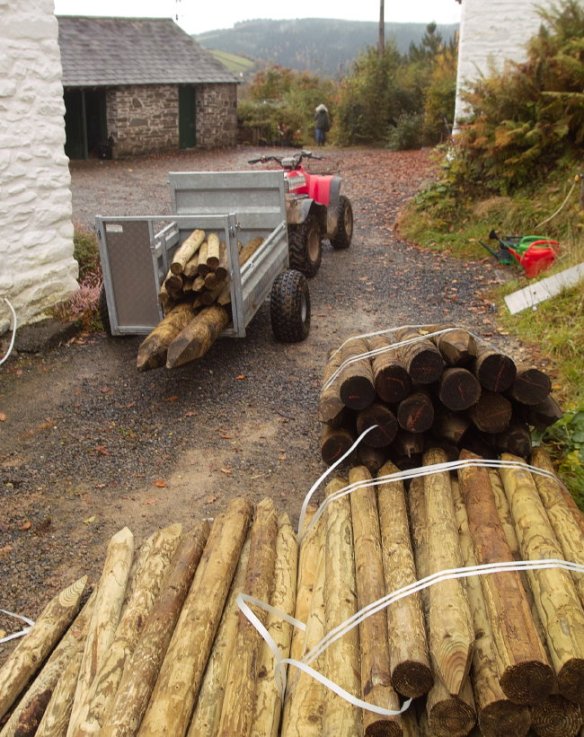 Grey, wet, breezy. A load of posts were dumped, and we began to move them into place, to subdivide the lower meadows. 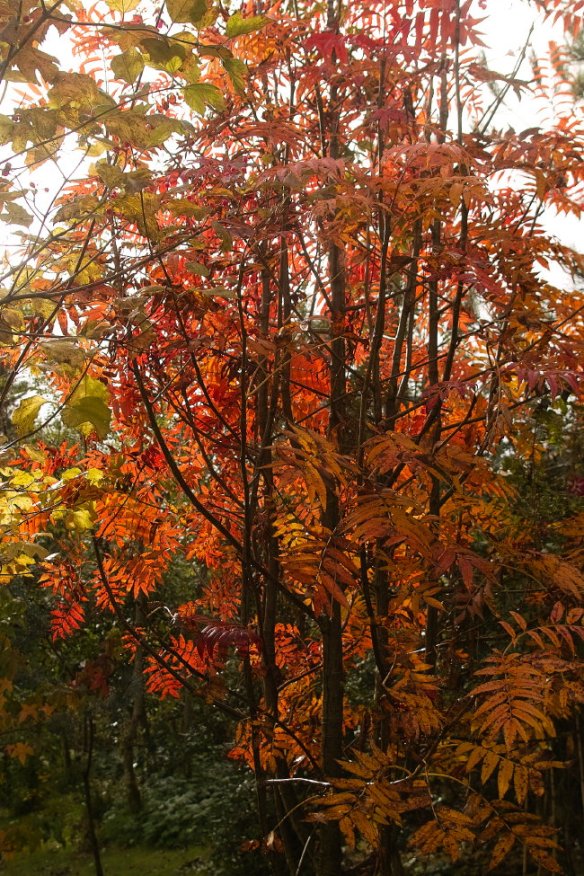 The clocks have now changed…

The leaves litter the ground.

The year begins to wind down.

And what did that same bit of nondescript mixed green weed suppressing ground cover look like in April and May? …

21 thoughts on “The Stars of the Show; and Under Pressure”