Definitely worth an early morning alarm call. Though after first pulling on long johns and dressing gown, and exiting the back door at about 1.40 am on Monday September 28th, I had my doubts. The scene was still bathed in that bright light that comes from a full moon, and the heavens filled with stars innumerable. And not a cloud in sight to dull the view. But when I’d found the moon, just beginning to dip behind the big oak, where was the dimmed crescent? Or missing chunk?

I’m afraid astronomy is not my field, so although I’d read all about this very special event – the last in an entirely predictable tetrad of lunar eclipses, which are apparently always preluded or followed within a fortnight, by a solar eclipse somewhere in the world – and timed by rising for well after the eclipse was scheduled to have begun, nothing seemed unusual at all.

Just a strong, silver, round moon. It was far too chilly to hang around for over an hour, so back to bed I went, where I was met with a heavy sigh. A fitful hour spent dozing, not wanting to fall asleep and miss a second glimpse. Once the bedside clock showed we were past totality, at about 3.15 am, when the earth completely obscures the path of the sun’s light to the moon, I chanced a second trip outside.

The scene was transformed. The bright silver washed darkness had gone, and was replaced with a dimmer illumination, and there through the wind swept twiggy Amelanchiers was a moon now both faint and rusty gold, with a for now thin, brighter lower margin. 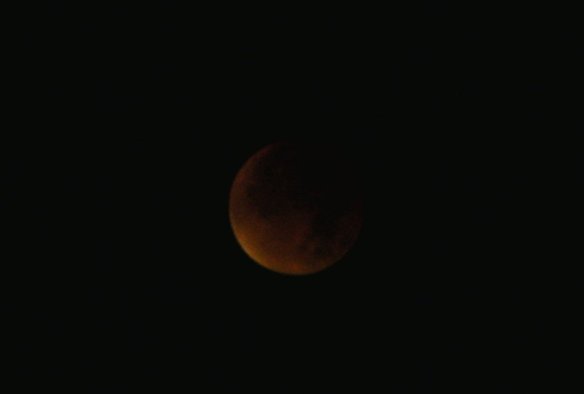 I moved to below the big oak for a clearer view, and tried a few pictures to record the scene. But a big part of the special moment was the other sensory input.

It was now even colder, and completely still, and quiet. Not a hint of any movement, save the occasional sensed fall of a dessicated oak leaf, clattering noisily through twiggy branches to land amongst Fiona’s ferns. And a couple of shooting stars, now unmasked in the poor light, adding momentary streaked flashes to the scene above.

The moon, though very special and dramatic enough for the rarity of the occasion, (we won’t get another such super perigee moon total eclipse here until 2033 apparently), seemed strangely smaller than when it had first shown above the horizon the day before – then equally golden, though much brighter. 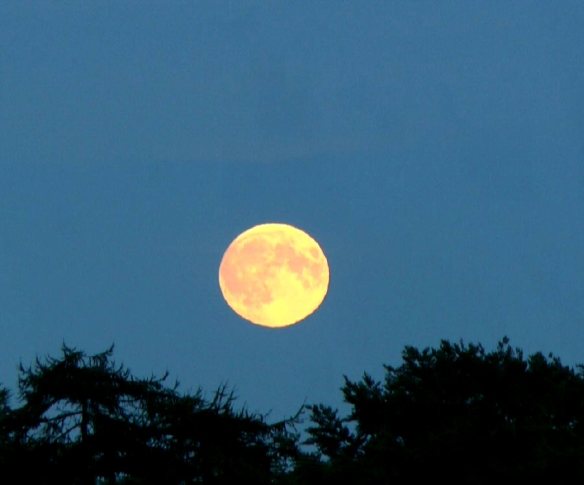 The colour change in both situations is all to do with light diffraction through the earth’s atmosphere, which I’ve written about before in the context of sunsets and sunrises (the ‘Rayleigh scattering’ effect – click here for more).

But what about its size? Frankly, although this eclipse was special because the moon was at its closest (perigee) pass, on its elliptical orbit around the earth, it looked much smaller when overhead and eclipsed, than when spotted in early evening near the horizon.

And so I discovered that this is a moon Illusion, and has not only puzzled observers and scientists for millenia, but also has generated many possible explanations, of which none has ever gained complete and definitive acceptance. The first thing to say is that it is indeed an optical illusion; holding a suitably sized small coin at arm’s length beside the horizon moon, and again when it is at its zenith will show that the moon is indeed the same size. We just perceive it as being larger when it is close to the horizon.

Click here fore more discussion on possible reasons for this, but in brief, the first explanation, postulated by Claudius Ptolemy in about AD 150, considered atmospheric diffraction might be responsible. Click here for more on this ancient Greek/Egyptian mathematician/astronomer. By the C17th, this idea had been abandoned and the moon illusion was thought to be of psychological origin.

Another explanation first mooted a little after Ptolemy, by Cleomedes in about 200AD, is referred to as the apparent distance hypothesis. When we see any objects such as clouds in the sky, those nearest the horizon are obviously farther away from us than those overhead. This generates a perception that the sky itself is a fairly flat or only gently curving surface, in which things moving towards the horizon always recede from us. So, the theory is that a moon or sun on the horizon, appears bigger than one overhead, because it looks farther away from us. In fact its distance from the viewer will be almost the same. The illustration below demonstrates this with what is now referred to as the Ponzo illusion. The blue lines appear different sizes, though they are the same length. Click here for more discussion.

An alternative perception theory, known as the relative size theory, states that the perceived size of an object depends not just on its image size on the retina, but also the size of other objects in its immediate visual environment.

Again a simple image of what is called the Ebbinghaus illusion illustrates this.

The two central circles are the same size, but are perceived as being of different sizes, because of the different sized circles surrounding them. Click here for more discussion. So the horizon moon, or sun, usually has other items nearby which give a visual context lacking in the zenith moon overhead, which therefore appears to be smaller.

Finally, another now largely discredited angle of regard hypothesis, postulated that the angle of the eyes in the head when viewing the moon or sun, which alter in position as the moon rises in the sky, influences our perception of its size. 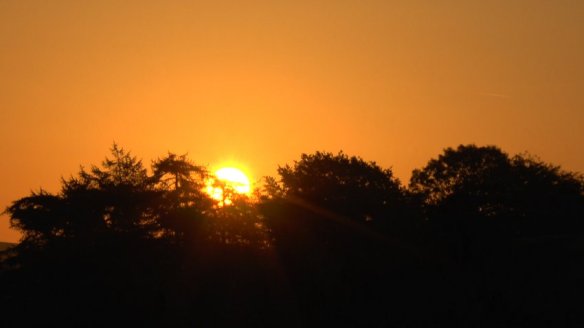 All of this thought and work over many centuries to try to understand the simplest of widely observed phenomenon. And yet still we’ve failed to nail it. How wonderful!

So what chance on a fleeting trip to Budleigh Salterrton’s beach, of cracking the parental enigma, when filial remembrances were like the fossilised red rock roots, glimpsed in the sandstone cliff with exotic yellow butterflies (might they have been Pale or Berger’s Clouded Yellows?) flibutting high above fleshy leaved, unfamiliar plants. Were they some overblown Mesembryanthemum? 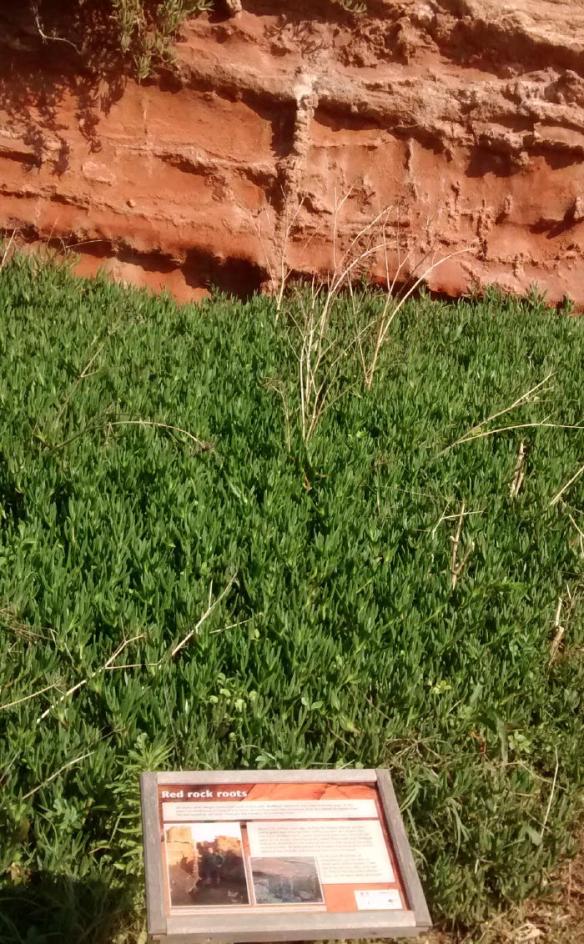 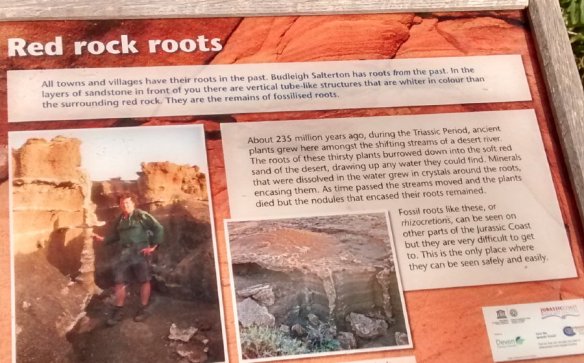 Camera forgotten, (thanks to Fiona and her phone for these pics).

But there was the ancient riddle.

Teasingly passed from father to son, but missing this familial branch until it registered here in my ears for the first time. Or maybe just forgotten decades earlier?

Perhaps we are all forced to struggle with its meaning, sometime? 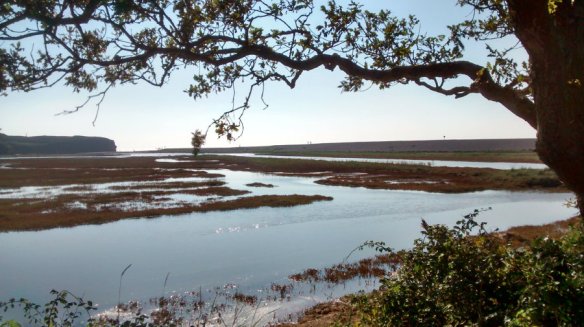 For me, beside the sea, was the time to contemplate its significance.

Home to digging bars and bulbs, and glimpses of movement amongst the terrace’s low foliage. Then, as the early October sun warmed absorbent surfaces, and the bar was whacked in through the shale and smashed concrete that passes for a growing medium in this part of the garden, an inquisitive companion.

A Common, or viviparous, lizard, Zootoca vivipara. Un-fazed by the movement, noise or vibrations as the bar smashed into the ground within a foot of it. The alternative common name signifying that unlike many reptiles, the eggs are retained within the female, so that what eventually emerges after a successful mating earlier in the year, are baby lizards, and not leathery eggs. 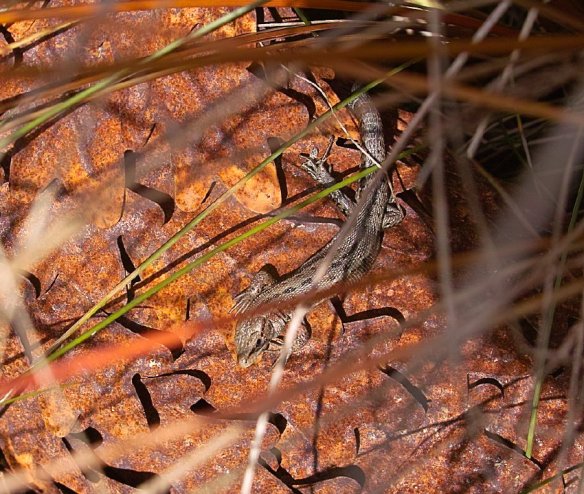 Like all reptiles, being cold blooded, they need to bask in sunny spots to warm up sufficiently to become active. But by the time I write, with colder weather arriving, this sinuous companion may well have abandoned the hollow form of the metal chicken, made from punched, pressed, rusty oak leaves, and lurked off to safer territory to hibernate, and ride out whatever winter throws our way. 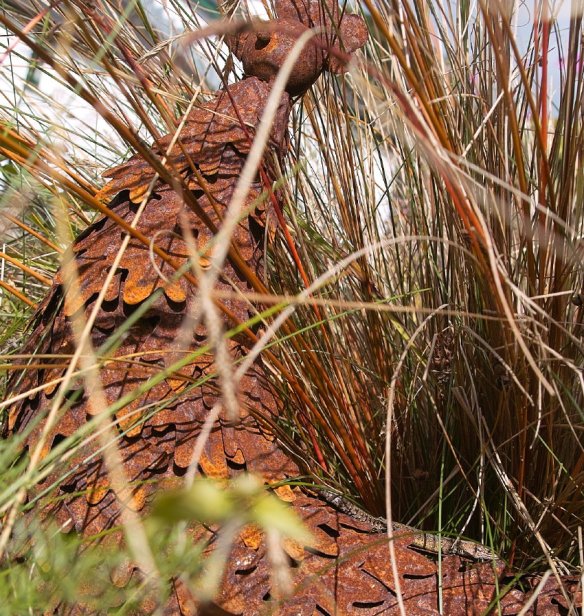 Finally, as an update at the end of the vegetable season, I’ve been pleased with the results from the big bag bottle bank. For once, I have decent sized squash and pumpkins – even in this challenging low light, and cool temperature, season. And everything else that I’ve bothered to grow has been equally productive. 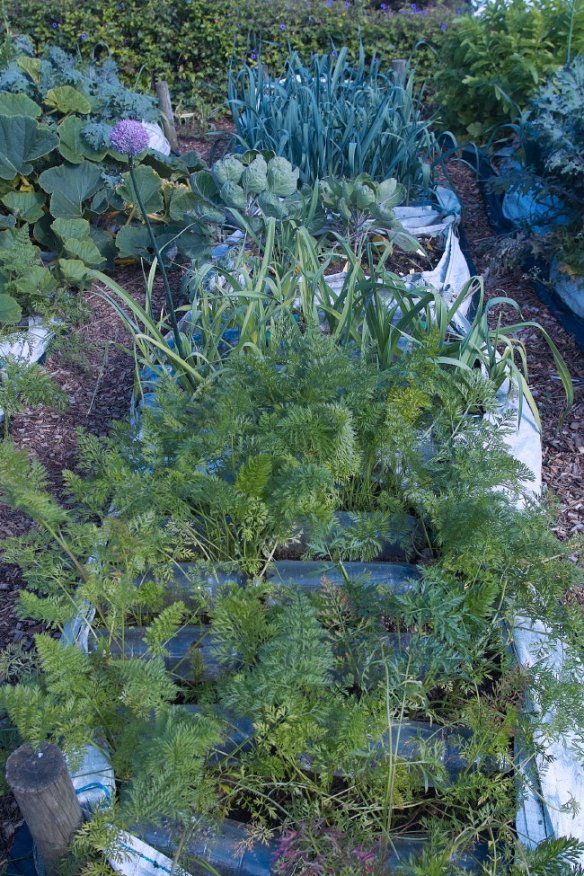 With the squash, the challenge is to ripen them sufficiently to get them to last well – it’s really tricky to achieve the two weeks of 25 degree temperatures necessary to harden off the skins, and prepare them for a long lasting maturation in cooler conditions, but at least the 10 days of sunny weather at the end of September has allowed a little bit of ripening.

A few more pictures, as the garden catches up with its minders, and begins to slow down. 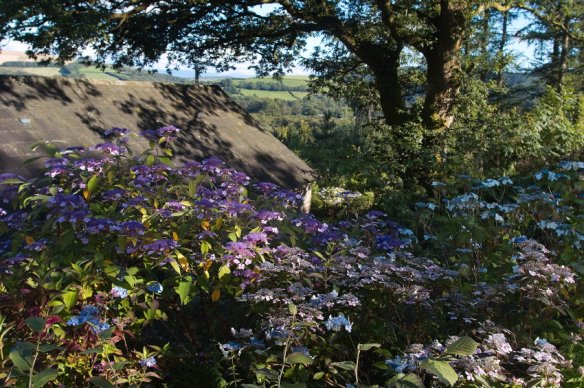 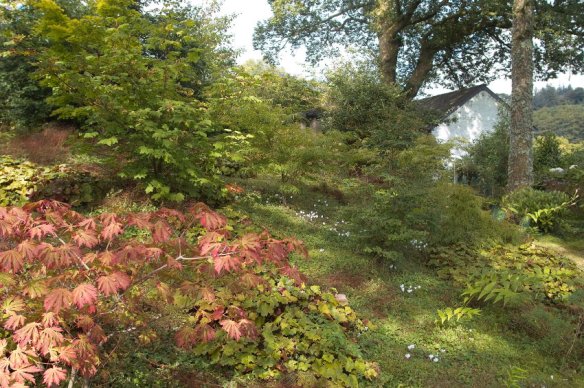 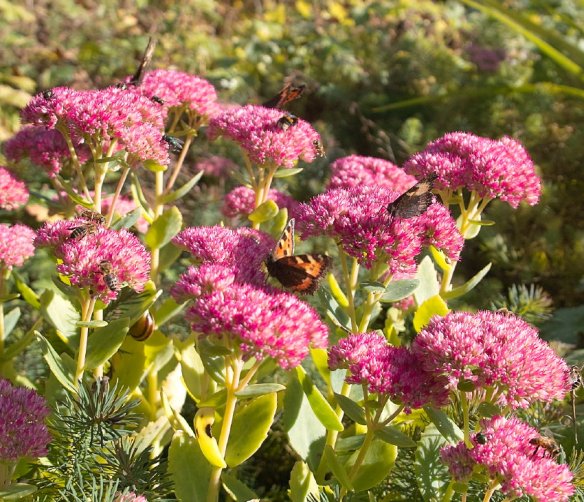 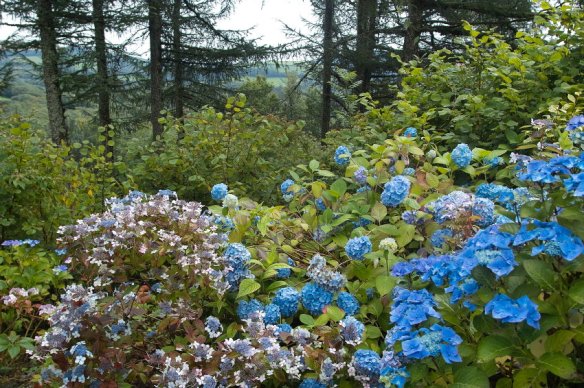 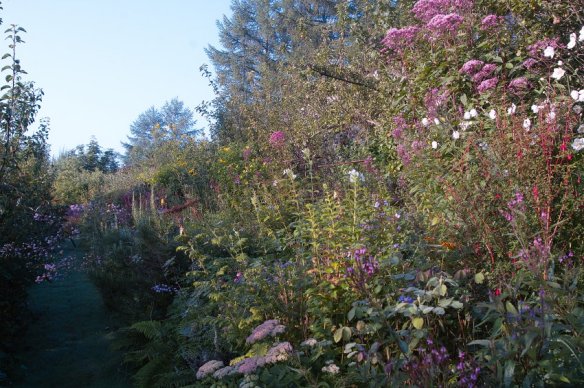 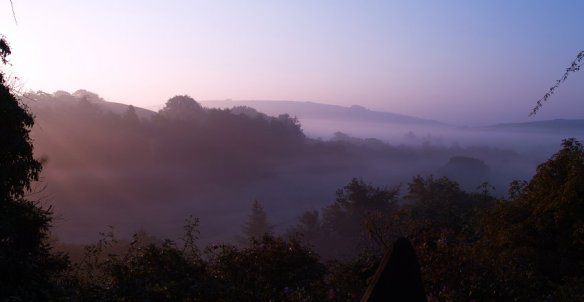