March 1st, being designated as St.David’s Day, celebrating Wales patron saint Dewi Sant, always challenges me to look at how spring is progressing. In particular how many daffodils are already out in the garden.

This year has ended up being one of the latest springs of recent years, with only a smattering of Narcissus ‘Rjinveld’s Early Sensation’ in evidence, as March 1st arrived. But I thought I’d include a medley of pictures of the rest of the garden to show that you don’t have to wait for these bulbs, to have early season colour. Before I switched off the radio to start writing this, the weather forecast predicts temperatures into the teens by Saturday (March 7th). This would be a delight after a lengthy fairly cold spell. Look closely and you’ll see almost no bees in these pictures – I still haven’t seen a bumblebee queen, though Fiona spotted a singleton on February 26th. 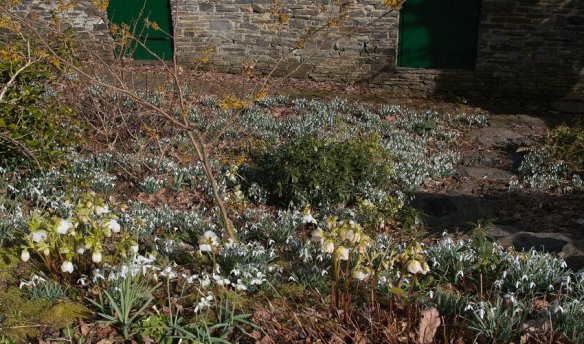 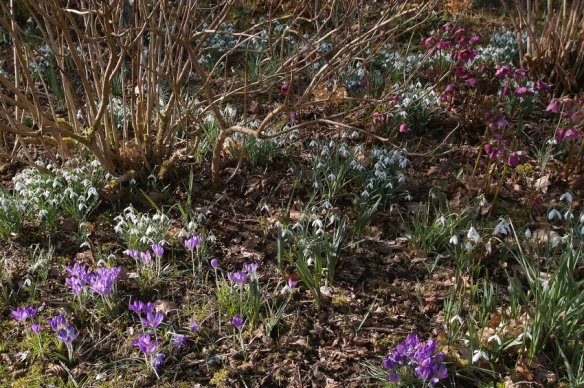 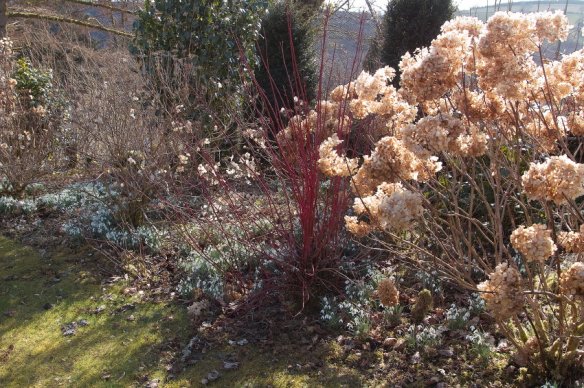 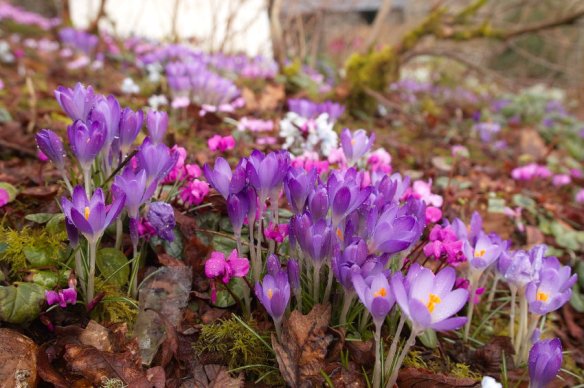 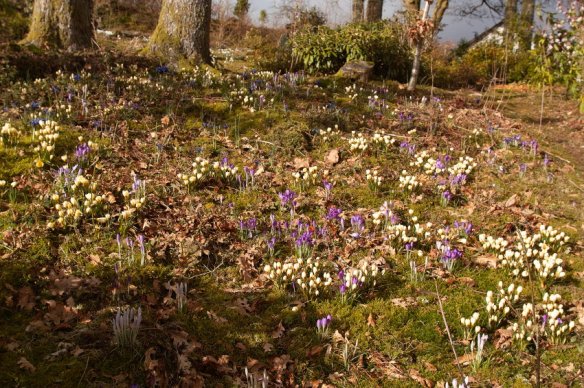 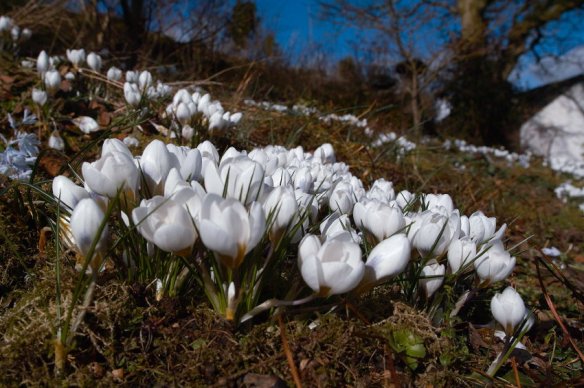 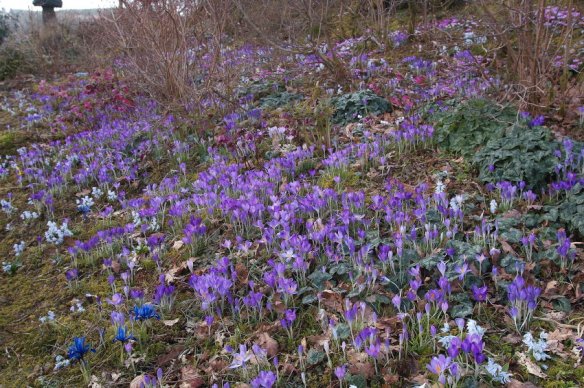 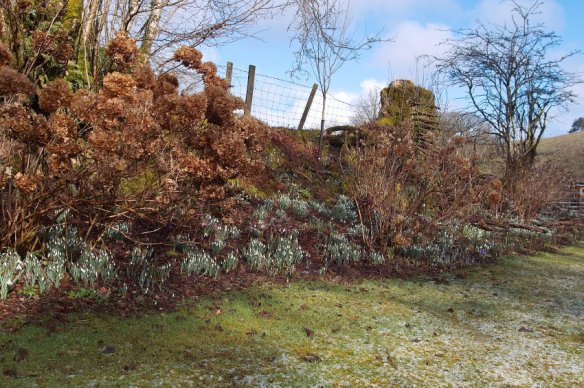 Just before March 1st, I’d taken a pause from internal decorating at dusk, to take in the flowers on the terrace garden and the scene over the distant copse, where only a handful of trees still remain, when I spotted the glint of late sun on the wings of a large flock of starlings across the valley. 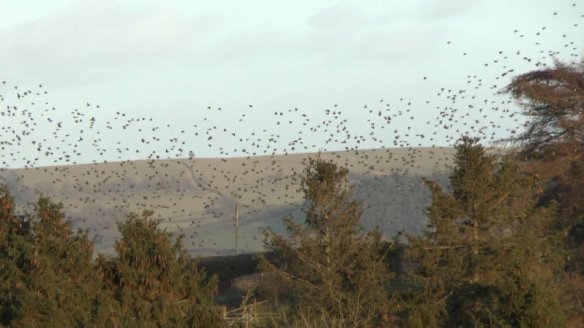 I’ve featured starling flocks before, but as this one flew down into the sloping field opposite, and below my standpoint, I had my first opportunity ever to see in some detail the movements which take within such a flock whilst working over a field, probing for grubs.

The flock was always incredibly tightly grouped, usually in a variation of an elliptical shape, rather than being spread out diffusely across the pasture. Periodically a few would leave the rear of the flock and fly fast and low to the leading edge, where they would land no more than a foot outside the existing flock boundary. And so the flock moved forward – I’ve upped the contrast below for clarity.

This type of probing for food involves the birds stabbing the ground and then gaping their beaks to widen the hole. Occasionally they’ll strike lucky and catch something edible. I’m guessing that a lot of the time, they won’t. 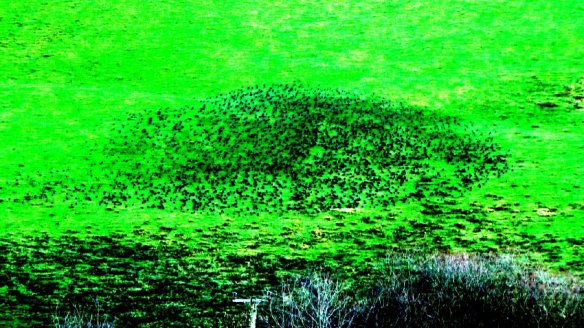 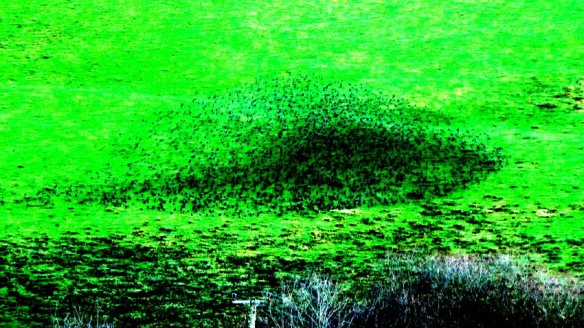 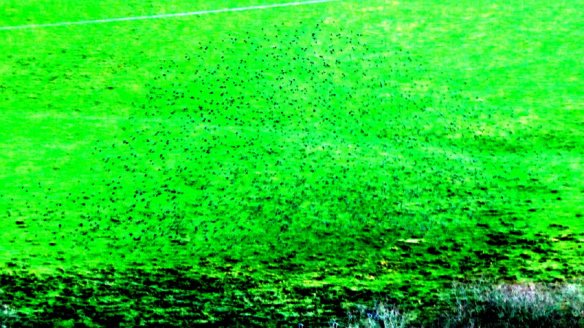 Periodically a bigger break away led to the whole flock taking off, and swirling around before landing nearby. By my rough estimates there were about 2-3,000 birds in this tight flock – over 250 observers were left, watching, on the electricity wires.

This movement pattern probably follows that of the in flight murmurations seen at dusk, where huge flocks swirl in apparently random patterns. In this situation each bird which changes direction or speed will only influence the 7 closest to it. But this quickly transmits through the whole flock, such is their speed of response. Click here for more.

Finally for those thrilled by such displays, YOU REALLY MUST click here for a beautiful piece of dusk video by a French director and photographer- Castillon, and Touzeras. Apparently they were waiting to film a helicopter, when at dusk the starlings appeared on scene. They rightly forgot the machine, and filmed the birds, to capture this bird ballet. Amazing, uplifting stuff. And a lovely piece of accompanying music as well… 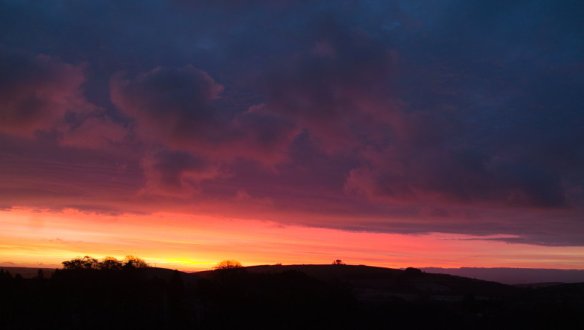 In this brief back problem affected post, I must record and help to promote, the wonderful venue at Rhos y gilwen. A privately funded arts venue just outside Cardigan, with a brilliant and diverse musical and theatre programme held in their stunning recently built oak framed hall. And all the result of the vision of the couple who bought the run-down property nearly 20 years ago, and have transformed it, and are in the thick of everything that happens there. We travelled down for their March 1st, St. David’s Day, concert. The music was memorable with the Cardigan Rugby Male Voice choir in good voice. Click below for the song which brought the house down on a historic rugby weekend (Max Boyce’s Hymns and Arias). An insight into the humour and rivalry against the old enemy.

This was interspersed with a range of songs performed by the Welsh tenor Rhys Meirion. An added delight was that his lovely and talented teenage daughters were also given a slot to sing in front of a packed audience. For any unfamiliar with Rhys’ wonderful voice, I’m including a couple of links to him performing, the first a fabulous duet ‘Prayer’ with Elin Fflur, the second a less polished recording of a moving song from a now forgotten musical about the first world war, which he has rediscovered, and reinterpreted for us in a bilingual version (‘Tell my Father’) which he sang for us on the night. Click here, and here, or below for a beautiful recording, simply sung with accompanying harp.

What makes Rhos y Gilwen even better, is that for many concerts you can book a pre dinner meal at the conservatory restaurant attached to the concert venue, and even a room in the mansion for bed and breakfast afterwards. And the whole thing (concert, dinner, B and B) will cost less than a night in a posh B and B. If you live locally or are ever visiting the West of Wales, I do suggest you check out their website by clicking here, and include a trip to this special place. It really deserves support.

I should also add my thanks for being allowed, for a small donation, to collect a small sample of the local Rhos y Gilwen snowdrops, to add to our collection, of Welsh origin snowdrops. Those below were photographed at a derelict location en route, amongst more contemporary detritus, and yet again show snowdrops’ ability to outlive their planters and thrive in adversity. 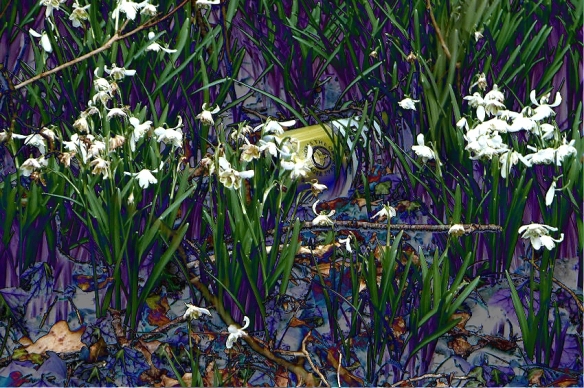 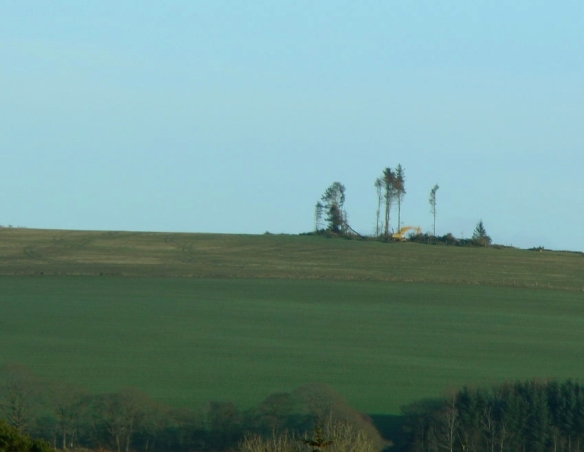 And finally, after an out of the blue request from a well-known greenhouse manufacturer, Hartley Botanic, (in January), my 50 word tip for March on their website can be seen by clicking here. (Unpaid for those worried about the hypocrisy of any creeping commercialisation here). I really love the header quote on this page, which encapsulates our own thoughts of what we’ve been trying to achieve here over the years.

My blog attempts to capture the, often inadequate, results.

“Gardening is the art that uses flowers and plants as paint, and the soil and sky as canvas.”   Elizabeth Murray.

(As a PS, having googled Elizabeth Murray, I can now see why this quote struck a chord with me. Click here for her website, where you’ll see that she’s been associated with Monet’s garden for many years. Our own ‘Garden Impressionists’ tag came from a single light bulb moment of exposure to this iconic garden, years ago).

Fortunately, or not, there are no such ‘just 50 words’ restrictions on my verbosity on this site.