The yard at dawn is quiet. The inveterate chatterers have left, reminding me that the swallows’ leaving and arrival are very fixed annual seasonal events which hardly change from year to year. In 2014 a switch to winds from a Northerly direction seemed to trigger the last few to set off on their long journey South, although our weather forecast suggests another 10 days or so of pretty benign weather. (Actually, as is often the case, 2 days after writing this piece, swallows are flying in the valley, but I’m guessing they’re just migrants from up North, passing through).

Pied wagtails still play about on the sun warmed, slated ridges, but their song is a bland alternative to swallow gossip. The young buzzards aren’t as noisy as they were at the beginning of September either, so the clear air on these still days has been filled with robin song, and the ticking of woodpeckers. Pleasant enough, but a hint that the year is winding down. Unless the weather changes suddenly, September will also turn out to be a single digit (mm) rainfall month, which is unheard of here – for any month. So, this has given us a chance to nearly complete the annual whitewashing experience.

Most folk will, I guess, be unfamiliar with the ritual of this concept, but in the UK, lime wash was the traditional protective and decorative finish for many older buildings, both inside and out. Its principal benefits being that it is cheap, easy to produce, can be easily coloured with earth-based pigments, but most importantly, it allows the walls of the property to breathe. Cement, or vinyl-based paints don’t do this, so a wall with modern paint finishes both inside and out will trap any moisture that rises up through the wall (most old properties never had damp proof courses incorporated). Or indeed any moisture ingress through tiny paint cracks won’t be able to escape once in. We’d learned the hard way from previous building restoration projects of the problems that will arise longer term from moisture in walls which can’t escape, so lime washing was always the way for us to go at Gelli Uchaf, to help to maintain it in a demanding climate.

You need a supply of lime putty, which is created by burning limestone, calcium carbonate, at high temperatures around 1000 degrees C to create quicklime, calcium oxide. This is then soaked in water to create fat lime putty, calcium hydroxide. The thick putty is then diluted down with water, and often a dash, (no more than about 1%), of oil – typically linseed oil, to create a thin cream like consistency which can be applied by brush to the walls. The oil aids wearability and moisture run off, but too much would impair the magic breathability of the finished surface. The other clever part of the process, is that over time, any lime wash or lime based plaster will gradually harden even more after drying out, as a result of carbonation – essentially the carbon dioxide in the atmosphere turning the material back into calcium carbonate, which is what it was to begin with.

Around the coast of West Wales many lime kilns, built centuries ago, still survive, reflecting the importance of this building material, before Portland cement and much less flexible concrete took over in building processes. In the 1990’s a few UK builders experimented with using traditional materials, particularly in restoration projects, and we’re lucky to have one of these pioneers -Ty Mawr lime- based very close to us in Brecon. It has grown into both a thriving business and also a knowledge base for anyone interested in heritage or ecological building techniques. Click here for more on their lime putty and range of ecological products, and here for some more suggestions on applying lime wash – though we’ve never bothered to pre wet the wall before application. (Addendum – after several years, we realised the importance of this, so now the walls get a light spray with a garden hose, before applying the limewash). But the point about avoiding frost until the lime has carbonated is a vital one – otherwise flaking may occur, and this carbonation process takes about 1 month for each mm of thickness of paint or plaster.

Very satisfying to complete the job, but sometimes, after coat number 20 or so, we wish the house wasn’t quite so long. Let alone the adjoining barn.

We’ve been deliberating with tup (ram) choices. Around the end of September is the time for putting a ram in with our badger faced, ‘Tor Ddu’ (black belly) ewes. This year we’re fortunate in having 3 potentially good enough ram lambs of our own to use. But which to select?

There are breed standard issues governing many finer points of conformation which I shan’t bore you with. But for us as hobby smallholders, of just as much importance are docility, twin potential, hoof condition and fleece. In the end, we think we’ve chosen Doublet, who has the biggest horns in the photos, and is also a twin lamb. We’re still uncertain as to what afflicted Del Boy who was for a while our favoured choice, but have our suspicions that he was attacked by ants. Whatever the actual initiating cause, he began licking the middle of his back.

With the warm sunny weather of late, this moist saliva stained, wool attracted blowflies to lay eggs. We managed to clip them out with a minimal amount of damage from a few tiny maggots. Finding maggots, or even fly egg clusters in a dense fleece often isn’t as easy as one would think, and so I played it safe and gave him a short back and sides to be certain none remained. And then a dose of a topical insecticide. Untreated sheep can be literally eaten alive by maggots within a very short period in muggy conditions. With temperatures beginning to fall a little, hopefully fly strike won’t be a worry now until next year.

Whilst clearing a section of one of our lower meadow ditches a couple of weeks back, I’d spotted a joined pair of red and yellow dragonflies dipping repeatedly along the narrow peaty ditch for egg laying. I was interested that the pair stayed linked for this, having straightened out from the wheel configuration of copulation, but with the upper male seemingly in control of the flying, whilst the lower female hammered her ovipositor beneath the surface at appropriate points. Needless to say I didn’t have my camera with me, so the following day, after collecting a couple of eggs from the poultry, and placing them in my shorts for safe keeping, I picked up the camera and ditching hoe and headed back down for another hour or so of ditching effort. A small copper, Lycaena phlaeas, butterfly appeared, always a delight.

With the sun rising, and the sweat falling, I headed for the upper pond to see what dragonflies were still around.

Have you ever tried photographing a dragonfly?

Some species are cooperative and spend significant amounts of time resting and basking on the ground or low vegetation. 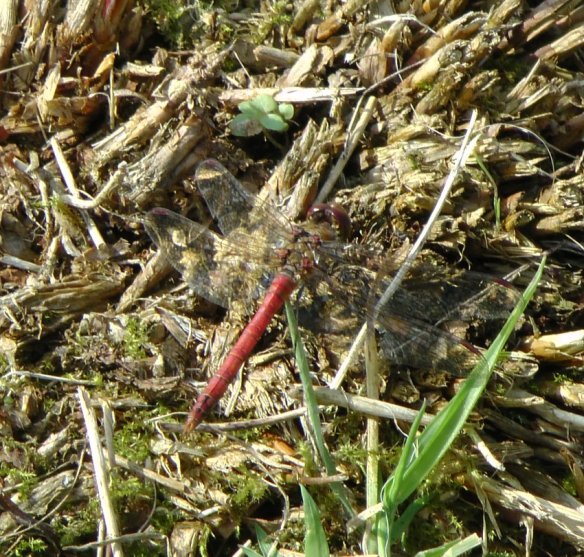 These are fairly easy to photograph provided you remember 3 important points. Wear dull clothing (certainly not white tops), approach slowly, and ensure that your shadow doesn’t fall across them as you get close.

But what about those majestic, patrolling large dragonflies, that actually confront you close up, and clatter their wings audibly, as you enter their sphere of airborne supremacy? They do hover, but move so fast that my digital SLR and basic lenses have never succeeded in capturing an in-flight image. So, I opted for the camcorder, with a more powerful zoom, but lower quality.

The problem with using this is the delayed shutter release when operating it in still- capture mode. So, I hoped for at least a few usable images if I took enough in the first place. But after crouching for several minutes to get the right angle to capture an insect against a background where it would be more visible, my knees complained, so I opted to lie on one side, on the still slightly dewy damp grass.

Much more comfortable, and easier for my hands to hold the camera still, and just wait for a patrolling dragonfly to fly within the general area of where the camera was pointing. Click the shutter, and hope.

Another quarter of an hour or so, and I reckoned I’d maybe got one or 2 shots where the dragonfly was actually photographed in the frame. (Only later on screen was I able to work out what some of the species were. Common darter, Sympetrum striolatum , male and female, Black darter, Sympetrum danae, and Southern hawker, Aeshna cyanea). 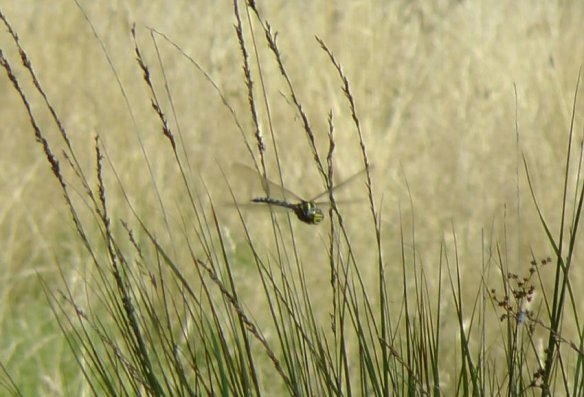 Even better, I’d witnessed one of the large patrolling dragonflies zoom in on, and clatter aggressively into, a mating pair of smaller dragonflies, right in front of me at the pond’s margin. But was this fleeting moment captured in any clarity? It all happened so fast. Actually it wasn’t bad – you can see below the green/black/blue Southern hawker attacking the back of the arched red male Common darter, which is grasping the olive female Common darter behind its head. 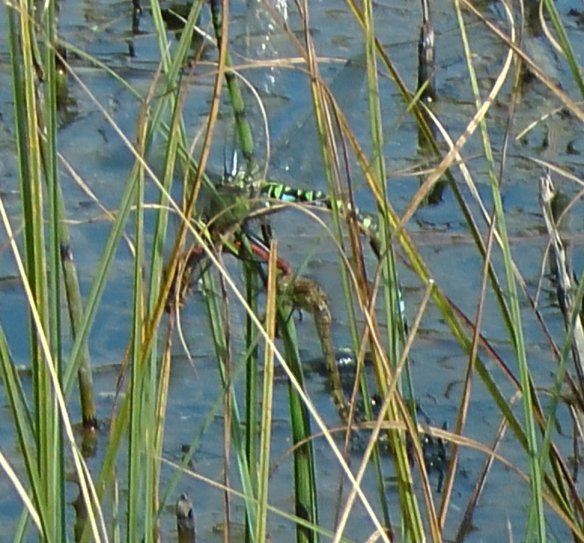 About half an hour later I was washing up, having climbed back to the house, and thought I must have splashed some water onto my shorts, since my right thigh was feeling wet. The day was warm, so I wasn’t too worried, but a few minutes later I realised that the damp patch was getting bigger, and liquid was trickling down my leg. The penny still hadn’t dropped, but once I’d put my hand in the short’s pocket and felt the broken shell, and seen the yellowy mess on my fingers, I remembered the eggs.

As a relief from such home based toil, we headed for Picton Castle, another of the Great Gardens of West Wales that is within striking distance of Gelli Uchaf. 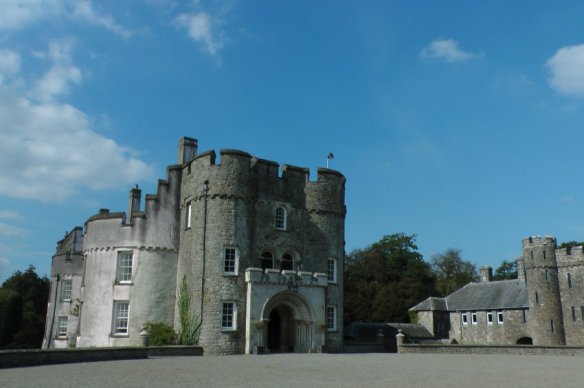 Fiona had visited earlier in the year when their collection of Azaleas and Rhododendrons were at their best. Now, as in our own garden, some of Picton’s plantings were showing signs of water stress, but the extensive grounds were planted and maintained to a really high standard, and particular highlights were the Myrtle tunnel, which was topped with attractive white flowers. 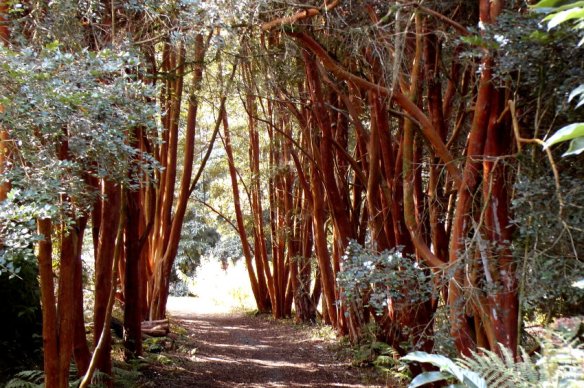 The Jungle boardwalk which ran through a huge stand of towering Gunnera.

And the beautifully planted up walled garden.

Well worth a visit at any time of the year. The garden officially closes from September to April, though there is an honesty box for visitors, and members of the RHS and National Botanic Garden of Wales can visit for free.

Finally, there is a wonderful courtyard restaurant, shop and gallery open to visitors. We were fortunate to catch a gallery exhibition by Nicky Philipps (Click here for her website, and to see who she has painted recently in her work as a highly regarded portrait artist!), and here for a recent article which explains her links to Picton, having been born and raised there, though the castle is now administered by a Trust. Anyone wanting to pick up a fabulous painting by this highly regarded artist would be advised to visit soon. There are many stunning paintings, mainly locally inspired landscapes and nearly all priced below £400, in contrast to the thousands which she charges now for a portrait commission.

Finally some more images from our own garden as we move towards autumn, and wait for the weather to reflect this. 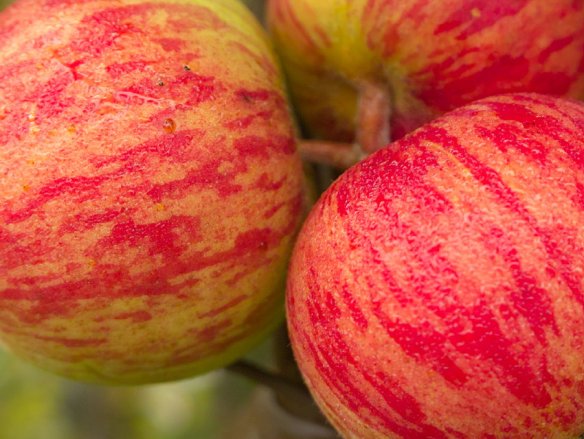 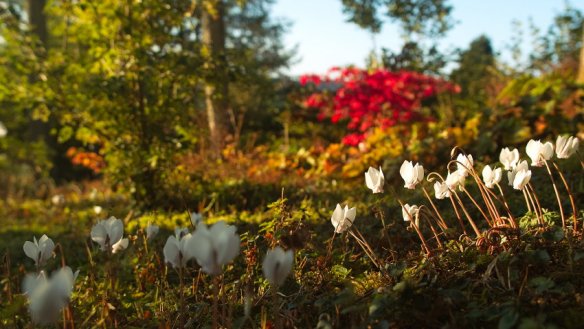 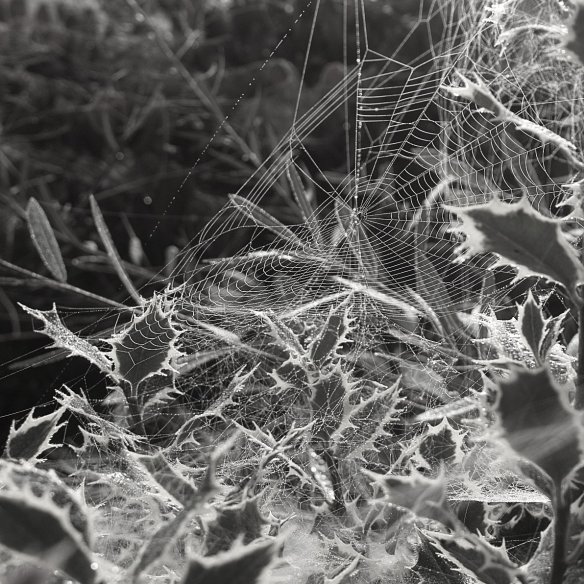 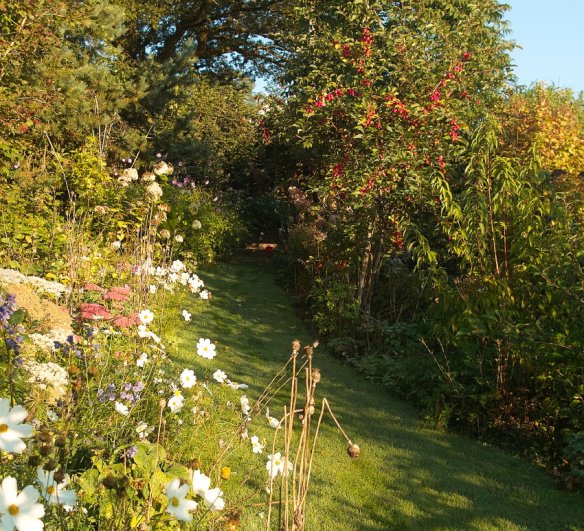 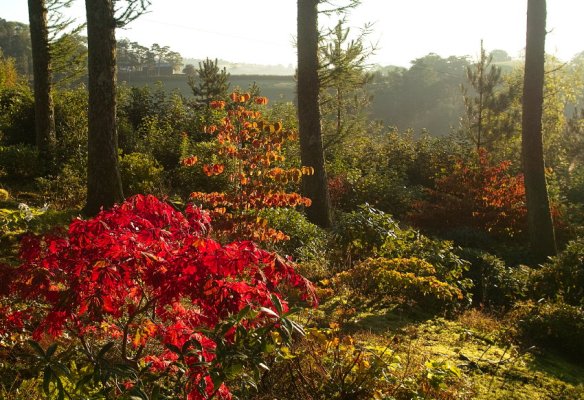 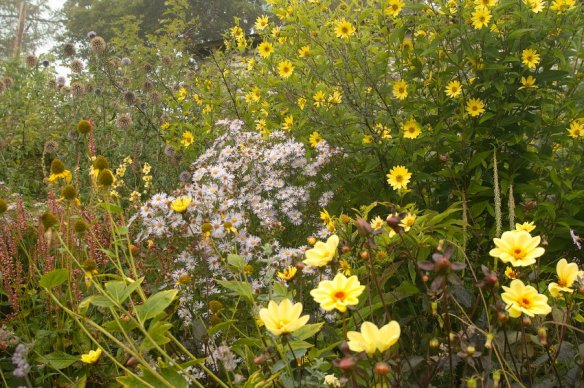