The nights have clearly drawn in, since the urge has returned for me to fiddle with an image and see if I can produce something as pleasing, but significantly different to the original. In this case the starting point was a Dahlia ‘Tahoma Star‘ whose colour and form somehow slipped through our aesthetic filter a couple of years ago. Perhaps it was a freebie, or included in a Dahlia selection? Or maybe Fiona leant on me.

Its frankly garish mix of colours and distorted petals do though give it a degree of striking symmetry which I thought would lend itself to some manipulation. And I like its regular 8 petalled windmill effect like those simple toys you can pick up at beach shops. 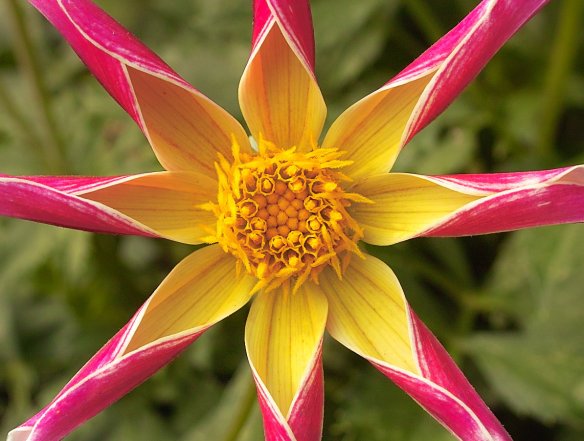 But is there a first amongst equals in my assorted offerings? 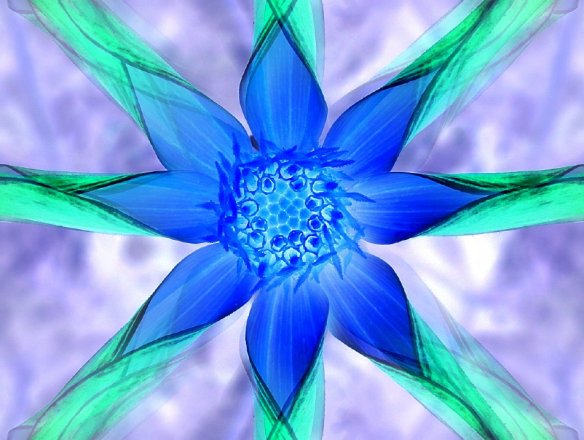 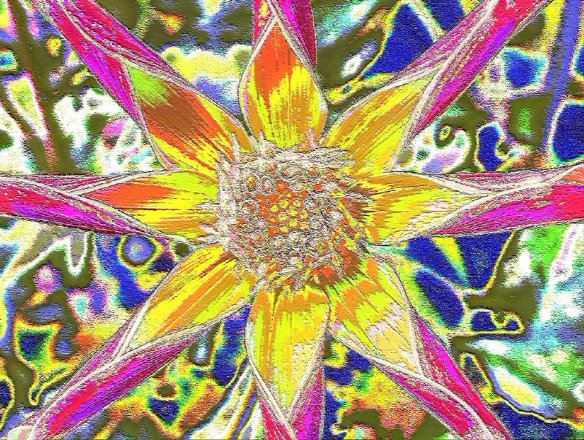 The swallows have all left for the Southern hemisphere, in disgust at this plagiarism, but the Dahlia will probably retain a place in the long border, in part because it was one of only 2 cultivars to survive in the ground last winter, but also because of our recent discovery of a smallish semi-double Japanese Anemone (‘Prince Heinrich’ AGM), which has a similar pink in its double petals, yellow stamens and also reveals some interesting green streaking of the rear petals or sepals, as the flower fades and dies. Planted in front of the taller Dahlia, this does seem to tone down ‘Tahoma Star’s brash form.

My eye has also been taken by the first autumnal hues creeping into foliage throughout the garden. But there seems a different order to the changes this year, though Acer aconitifolium is, as always, the first to colour up completely and uniformly. A most reliable Acer with us. Almost as early, and putting on its best show ever with a range of colours from toffee to yellow, to crimson, with paler taupe colours on the leaf undersides, is Viburnum furcatum, a slow growing deciduous shrub with crinkled edged, deeply veined leaves. It still hasn’t flowered for us, but earns its place with glorious leaf form and colour throughout the year.

Many other plants currently just have single leaves going through a range of autumnal colour and pattern changes whilst their neighbours carry on regardless with their chlorophyll induced greenery. More firsts amongst equals?

A selection of images to illustrate this: 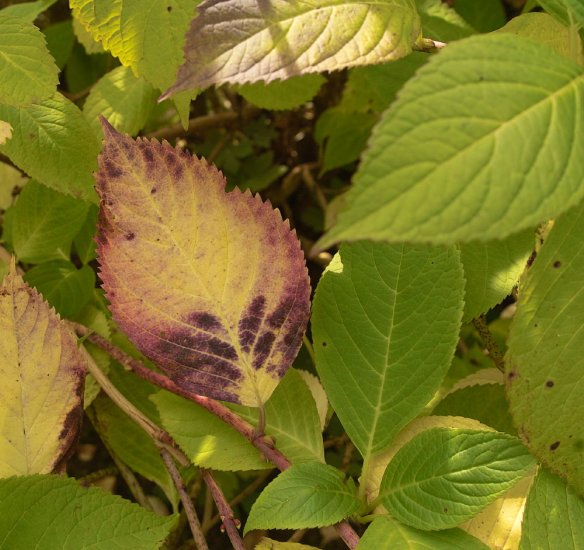 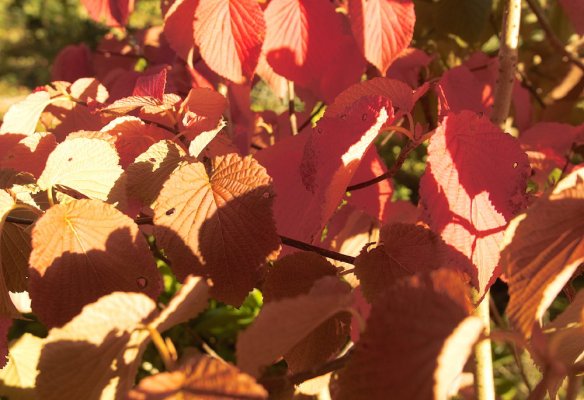 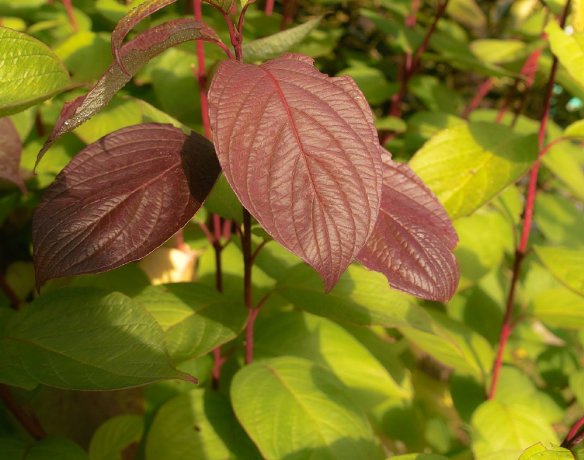 Sitting at the table with a cup of tea, after crow barring in some more Crocus tommasinianus corms into the magic terrace garden, I spotted some distinctive notched cotyledons of Erodium manescavii germinating amongst the slate chippings surrounding the table. And not one seedling but several. This was both pleasing and frustrating, since I’ve been slowly trying to bulk up this lovely plant through seedlings for at least 3 years. 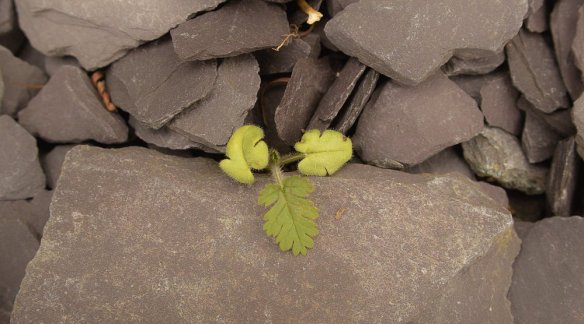 Its pretty, pink flowers with cut foliage, are produced continuously from early May to October, and unlike its cranesbill cousins the hardy geraniums, it gently grows in size without smothering neighbouring plants. But I’ve also long been an admirer of its fascinating seeds and their dispersal system. This year, with the sunny weather, I’d managed to harvest quite a lot and had sown them on the top of compost with a light vermiculite covering and pushed the pointed seeds into the compost surface.

So after finding the germinated seedling, I thought I’d check on how my pots were doing. 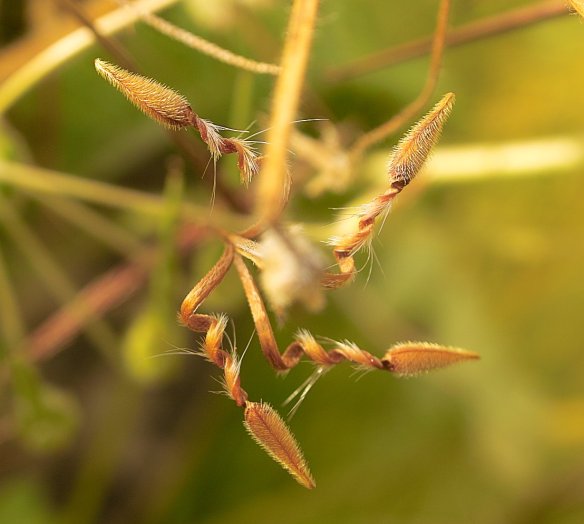 You can see below, that the fantastic helical twisted, hair covered seed extension, (which is the dehisced split portion of the style and in this case exhibits wonderful 4 ways symmetry), has completely straightened to reveal almost sperm like structures. Clearly the regular watering had altered the tissue tensions created in the seed’s long appendage as the seeds had dried out.

I thought more research was merited, and found a brilliant and elegant paper on this topic, by Evangelista, Hotton and Dumais. Click here for details – it’s really worth a look, since not only did they study, using time lapse photography, the way that the Erodium seed, in this case a native American annual E. cicutarium, dries out and coils up. But also how it then straightens as the humidity increases. They also use computer models to work out the energy stored and released during this process. They demonstrate how this repeated twisting and straightening will actually drive the pointed seed into the ground, or a crevice, and they speculate about the evolutionary advantages of such a dispersal technique over the straight catapult dehiscence of the Geranium seed. The smooth Geranium seed can be flung further with little air resistance, whereas the hairy twisted Erodium seed stands a better chance of being blown along by any wind around, so potentially travelling greater distances from the mother plant.

I’ve also found a brief time lapse clip of what actually goes on as the seed goes through this drying out process, and the boring – that’s BORING, motion that can be created, when it becomes wet again.

Before any of this had happened we’d made another trip down to the National Botanic Garden of Wales at the end of August, for their annual orchid festival. A weekend of talks and display stalls showcasing specialist orchid growers from both the UK and abroad.

As well as the lovely exhibits, there’s always something interesting to see in the extensive grounds. On this visit we particularly liked an area of annual planting in front of the only remaining section of the original manor (Principality House) – most of the building burned down long before the Middleton hall estate was acquired to create the new botanic garden just before the turn of the millenium.

We’d been keen to visit again, since in 2012 we’d happened to be there at the end of the orchid festival weekend and were tempted by a small Cymbidium ‘Tiger Tails’ which we were assured would flower in the spring. Having kept quite a few orchids years earlier, and having now devised a system for heating the greenhouse with compost, I thought it was worth a go, and in due course it produced a thrilling display of 3 flower spikes, beginning in February and continuing into early May. What was a huge bonus was that the subtly coloured blooms had a delicious fragrance – quite a rarity with many commonly grown orchids. It’s shown below, photographed outside in May, with Narcissus ‘Pipit’ in the background.

So this time we each chose additional orchids to add to our mini collection. Only 2 have flowered so far, an unusual Masdevallia, with a 3 fold symmetry, and a Cattleya with flowers fairly similar to the typical 5 petalled Cymbidium above. 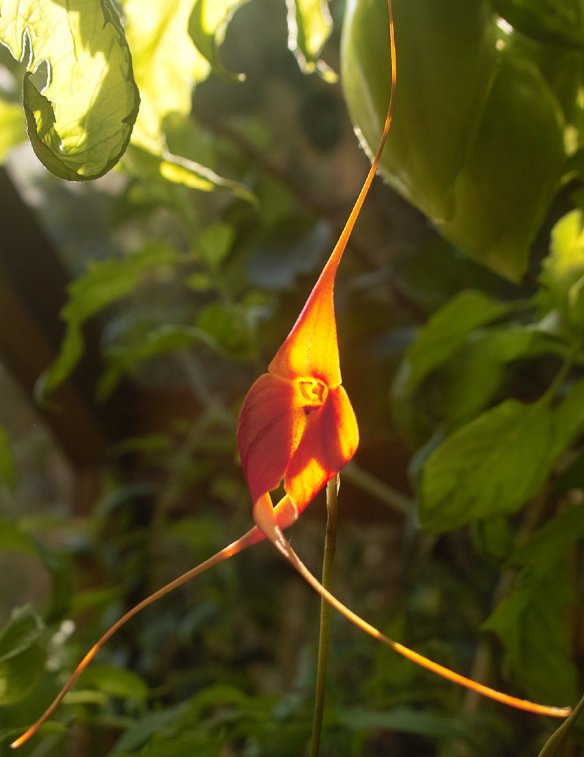 The plan is to concentrate on a few cooler growing orchids that prefer winter night time temperatures of a minimum of about 10 degrees C. The Cattleya above needs a slightly higher minimum, so may need a spell indoors over winter. Talking to several of the nursery owners, it’s clear that many Cymbidiums will tolerate the occasional spell below this, even to 5 degrees C, but the challenge for me now is to use the compost bed reactor and inner zone to achieve these levels throughout the winter. For now, this has meant emptying out the compost bed completely and beginning to recharge it with dry material, in readiness for heat generation once colder nights begin. But I also plan to add an additional heap to the rear side of the greenhouse to have a back up available when really sustained or severe cold weather strikes. 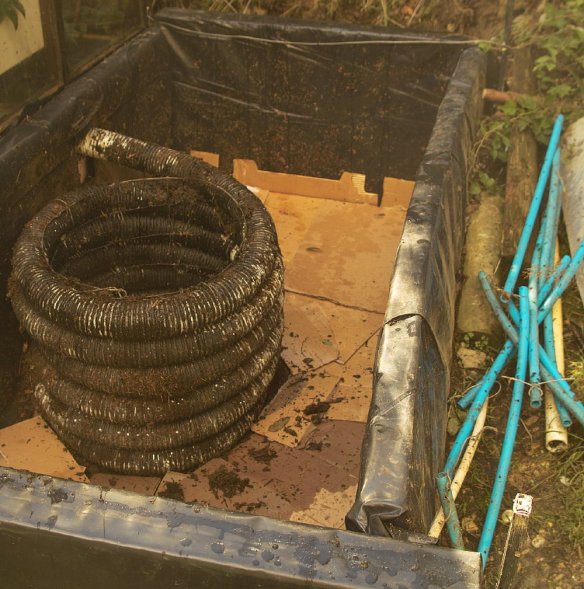 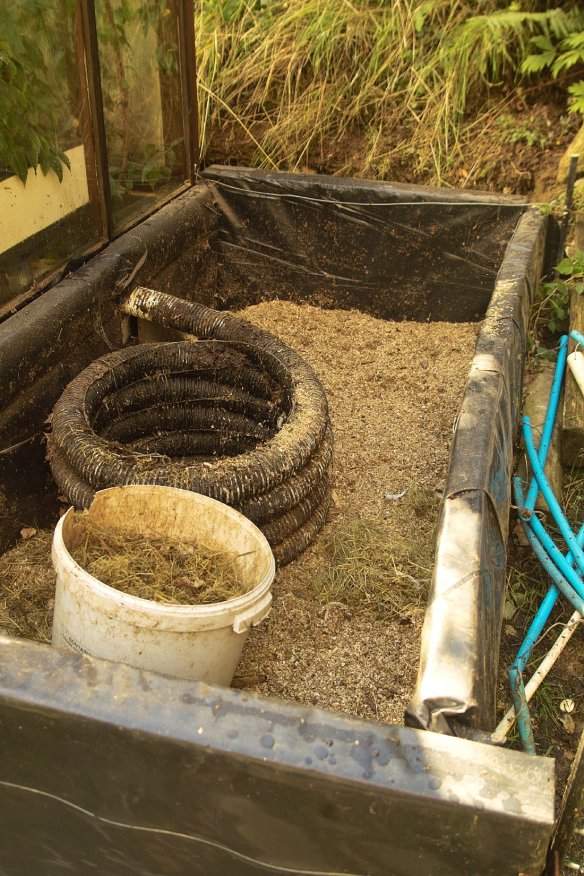 A conversation with Ray Creek, one of the British nursery owners, about how the Dutch heat their commercial orchid greenhouses (and they are some of the temperate world’s largest growers of orchids for the cut flower trade), came up with several cutting edge solutions, including special acrylic sheeted ‘glass’ houses; using subterranean aquifers as thermal heat stores to store heat during the summer for re-use during the winter; and even current plans to drill down into the earth’s core to extract thermal energy for greenhouse heating. Which makes my efforts with compost generated heat seem very amateurish!

In the meantime, cutting back a lot of the tomato foliage is allowing more light into the greenhouse, and the final fruit to continue to ripen, with the odd orchid strategically placed between them. 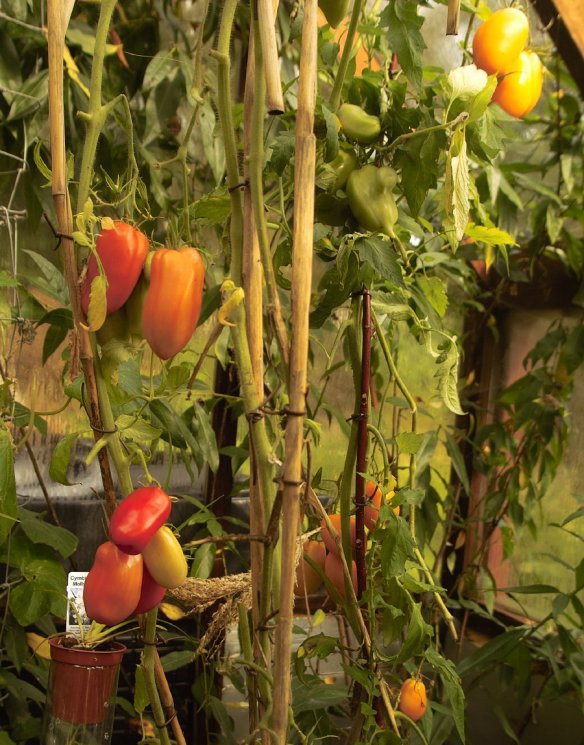 Outside in the garden our butterflies – principally now Small Tortoiseshells, Aglais urticae, are loving the extended drier, warm weather almost as much as we are.

Finally, some more photos from the garden over the last fortnight, including for Rinka a few more NABS – (well one might as well appreciate them whilst they’re here). 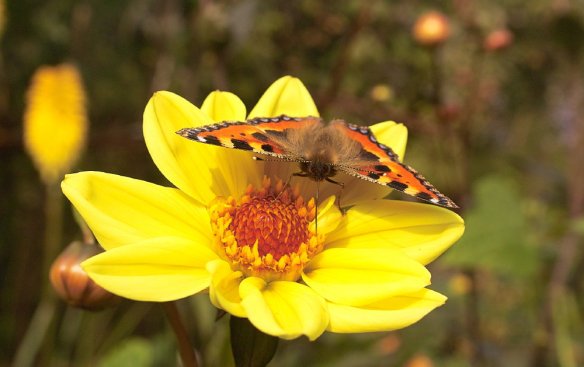 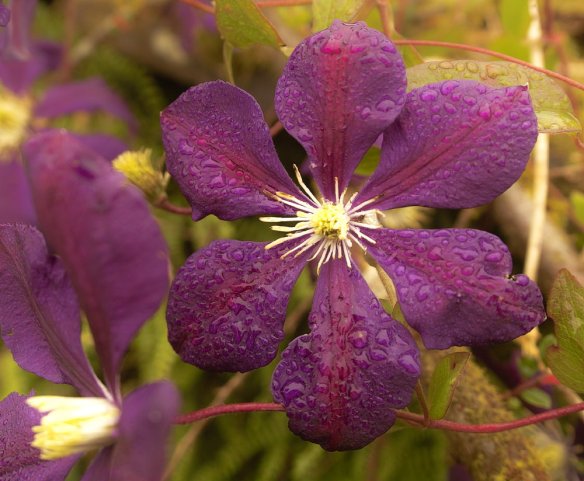 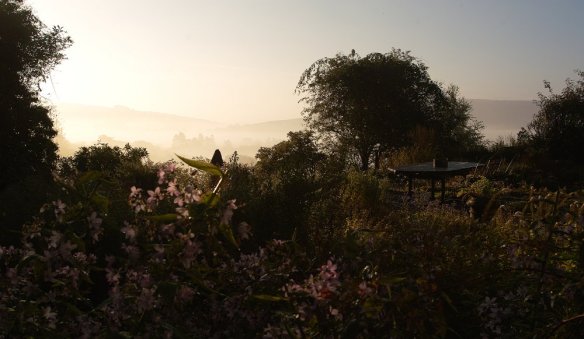 2 thoughts on “First Amongst Equals; Curling, Furling and Burrowing; and a Reignited Interest.”