A special day last week when on the 16th, whilst concentrating on some log splitting, I picked up a faint but distinctive sound from the far side of the valley. And paused. Was it a cuckoo? As is often the case, the bird didn’t oblige by repeating its call straight away and I was left thinking perhaps it had been my hearing playing tricks, but then a few minutes later in a pause in the axe work, it was quite plain and unmistakable. One of the real seasonal waymarks of the year had been reached.

The cuckoo was back. And even better the same day, as rain showers drifted over the valley, the slightly later than usual first swallow fly past of the year. So a day to lift the spirits.

No cuckoo or swallow pics, I’m afraid, and not much chance of hearing a cuckoo when one of the RAF trainer jets flies low overhead. 17/04/12

I’d remembered reading about some recent work by the British Trust for Ornithology (BTO) studying cuckoo migration and so checked up to see how our first Welsh cuckoo, let’s call him Dewi, had done compared with those fitted with tracking devices by the BTO. Interestingly, Dewi beat all of them back to the UK, the closest of the 5 tagged last year in Norfolk were still in central Europe (Casper, Martin, Lyster, Clement and Chris.) Anyone wanting to see their divergent routes out to central Africa and then back again to the UK can follow the maps and get more information by clicking here. But how extraordinary that these medium-sized birds only make it to the UK by mid-April, and are then on their way back to Cameroon by early June.

One of the reasons for the study was to confirm where they spent the winter, and how they got there, to try to work out why British cuckoo numbers have declined by over 50% in the last 25 years. Clement’s solar-powered tracker showed him making it to Cameroon, but not returning, presumed lost in action. But perhaps the fault lies not in Africa, but closer to home, with the degradation of habitat and loss of insects (their major food supply), which might also explain why, according to BTO information, it seems that Welsh and Scottish cuckoo populations have fared a bit better than those in England. In subsequent years more monitoring of birds from these regions is planned.

The swallows have an even longer trek to South Africa, but are usually back here a week or so earlier than this year. Inclement weather along their migration route is probably the reason for their late arrival.

Just now, we’re locked into a classic Welsh April showers weather pattern. One of the joys of this, apart from the much-needed garden rain, is the fantastic quality of light and cloud formations which we’ve experienced recently. I’ve included a few images below, but most days have yielded similar pictures, in between stretches of varying shades of gloomy grey. 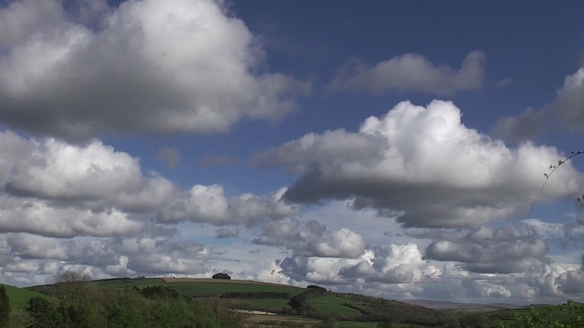 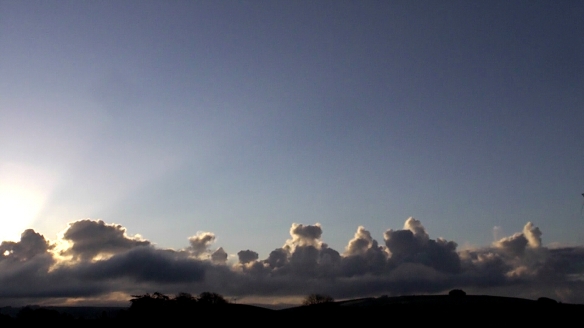 When we lose sight of the distant black mountain, rain is nearly with us. 18/04/12

A garden highlight this last week, albeit fleetingly, has been the section of south-facing bank below our mossy larch copse, where soil surface temperatures can hit 50 degrees C at this time of year. The Tulipa “Little Beauty” have put on a great early show again this year although I fear that they are succumbing to a fungal disease, the dreaded tulip fire, so we might be lucky to get a decent third year’s display from them. But we added in some T. ‘Peppermint Stick’ (a T. clusiana cultivar) and a few T. whittallii this year. We’d grown a few ‘Peppermint Stick’ before so knew what to expect, but we were really thrilled with the effect of the T. whittallii. A medium height species from Turkey, it seems a bit reluctant to open its elegant, fine flowers other than in warm sunshine – which has been a bit lacking of late, but when it does, it has a real wow effect. What a subtle blending of rich colours in a single bloom. I’m usually a pastel colours person, but in bright sunlight the effect created with these flowers close to, but separate from, the ‘Peppermint Sticks’ was fantastic.

Tulipa whittallii , foreground, with T. ‘Peppermint Stick’ to the rear. The cerise pink flowers are the much shorter T. ‘Little Beauty’, and the purple flowers to the top right Pulsatilla vulgaris. 13/04/12 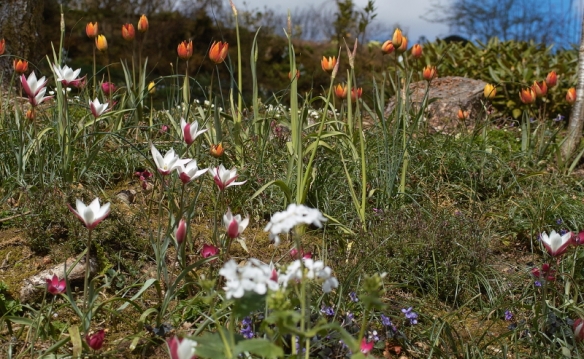 Almost good enough to persuade me to plant a few bulbs every year, if they fail quickly. Still, being a species, I’ve also had a go with my pollinating paintbrush so we might get some seed to try to grow on into our own Gelli strain. Meanwhile there are still lots more Tulipa sprengeri seedlings appearing throughout this area of the garden, whilst I’ve now identified the 3 T. sprengeri bulbs which we acquired at great expense last year, and not being one for garden labels had been struggling to spot.

I shall also ensure that these get cross pollinated to produce some more seed to spread around. Germinating T. sprengeri seed is pretty easy if you can get fresh seed and it’s sown in situ, but apparently moving young bulbs is likely to result in the bulbs failing, and in part this explains the high cost of bought in bulbs. But will all of these succumb to tulip fire as well? The RHS guide to this disease (click here) paints a bleak prognosis – basically forget growing tulips in the same area for years, but I can’t help but feel that some grown from seed should have greater resistance to the fungus responsible, Botrytis tulipae, so I might persevere. 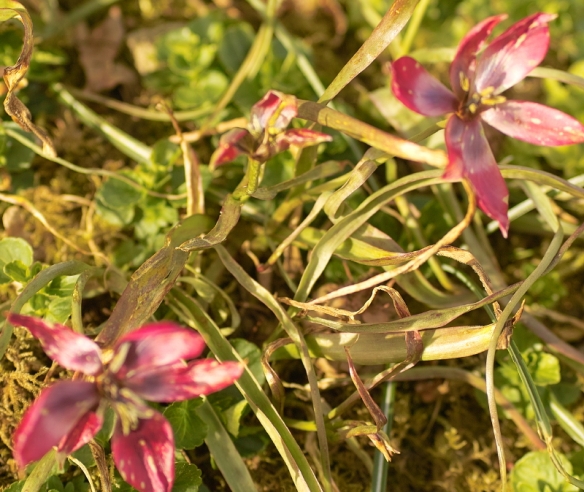 The curse of the aspirant tulip grower, particularly in a wet climate – the fungal induced distortions and blotches of ‘tulip fire’, here affecting T. ‘Little Beauty’ 17/04/12

This post is a bit behind schedule, firstly because of another drain blockage, after another visit from relatives, and near calamity with stuck drain rods, but more because we took some of our cards and latest silk scarf designs, which arrived on a long roll of silk last week (always an exciting moment), down to a Square Pegs exhibition in Newport, Pembrokeshire last week. The Square pegs is a small group of designer/makers, mainly from the Cardigan area who put on a few shows in the area throughout the year (their website is here). This meant a morning of setting up, and another day of stewarding, and for once I remembered to pack a camera, which was a good move as the drive down involves passing the long line of the Preseli mountains flanking the Gwaun valley which leads to Fishguard.

An area of great historical and mythical interest from neolithic times onwards, the Preselis are also the home of the bluestones which were used to create the inner circles of Stonehenge – not the whole installation. So looking for a suitable spot for Fiona to pull over, for me to get an image with morning light illuminating their spine, I was pleased to stop and then discover that right next to where I’d taken the photo was a large Bluestone with the farm name carefully painted on its side.

The view towards the Preseli mountains, with flowering gorse in the foreground…… 16/04/12

The rather beautifully painted farm sign, running along a large lichen encrusted Bluestone, just to the right of the gorse in the previous picture, and lying at the end of the farm track. Researching the meaning of this Welsh name took a while, but rather appropriately it means black gorse – though I stand to be corrected on this. 16/04/12

This stone looked of similar dimensions to the one which we now have in our garden as a seat from which to watch the butterflies in August nectaring on our Sedum and Buddleja. How our stone came to be where we found it on a bank hidden with fallen leaves and debris we have no idea, but it has been hammer dressed on one face to create a slightly bevelled surface, as well as having a strange row of 7 holes with remnants of metal bars on another face (presumably created much later),  and must have an interesting story to tell – if only we could interrogate it. There are a couple of photos of how we moved it in suitably primitive fashion from the bank to its new resting place, with me twisting a knee in the process, on the personal interests page of the blog.

Our Gelli bluestone seat showing the hammer dressed, shaped side. What did the men or women who worked this huge stone look like, and when were they at work? And how did it come to lie on this piece of upland Carmarthenshire? I perhaps should add that on the surface facing the ground are 2 conventionally placed holes indicating that the stone had another previous incarnation as a gate post. 21/04/12

Sometimes even large stones (erratics) were moved by glacial action long distances from their source, and were then later worked on by human hands.

BUT, including this little piece on Bluestones and the Preselis made me check up on this subject and the links to Stonehenge, history and mythology. Readers may all be very aware of the background to Stonehenge and how and why huge lumps of rock were moved 250 miles from South Wales to Wiltshire 2000 years BC (Oh, and the fact that most of the UK was apparently flooded about 7460BC, just after the much earlier first workings on the Stonehenge site, following an impact from a comet).

This time of the year, the nesting Pied Wagtails regularly demonstrate their canny distraction behaviour :

Always building nests under the eaves of our barns or house, a walk outside brings them instantly dancing down, quite close to you, and perching on a suitable structure away from the nest location. You can then approach them quite closely until at some point they rationally decide it’s time to switch locations and ‘dance’ off with a very distinctive bobbing flight to another perch even further from the nest. But this does allow someone not geared up to close up bird photography to get some interesting images of how the apparently dancing flight is created:

I’m still not quite sure where the bird’s right wing is on this image – is it the middle upright structure, or the flat section to the right, or perhaps both? But the photo does convey the dancing flight of the Wagtail. 15/04/12 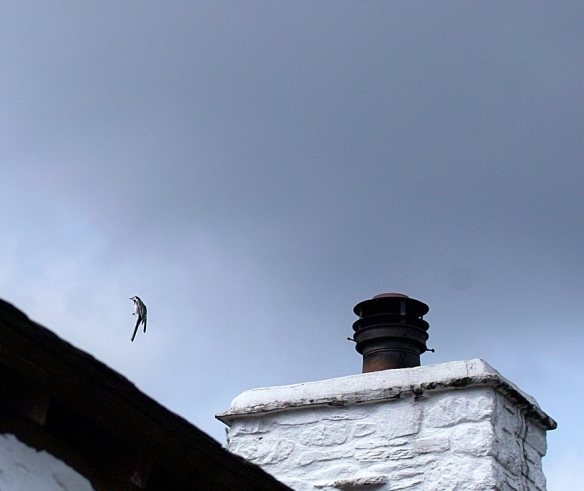 this was the second image as I panned round to capture the bird’s flight onto our roof ridge. I didn’t paste the Wagtail here, this was how it was ‘flying’ at that precise moment. 15/04/12

Lots more is emerging in the garden in slow motion, with the lower temperatures of late, but at last the trees are starting to come into leaf with that vibrancy and range of colours, green and brown.

Fresh greens of Lily of the Valley and white honesty flowers, and the pale pink tinged white flowers of Rhododendron ‘Dora Amateis’ lighten the copse on a grey day. 23/04/12

Why we should all have a few dandelions in our garden. This native (and unknown to me) bee spent ages moving around this single flower, long enough for me to nip in and grab the camera and take a dozen pics. 21/04/12

Worth waiting 4 years  for the first flower on Camellia ‘Bob Hope’ – one of Fiona’s choices! 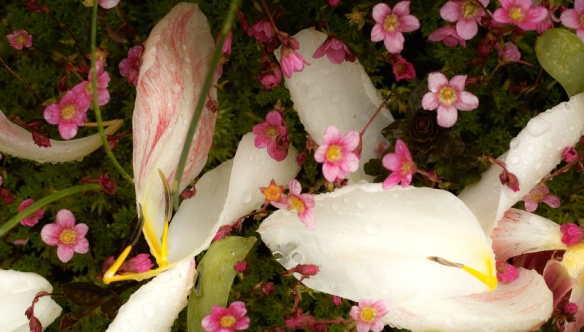 On an after dark rabbit hunting sortie one completely still and quiet night, obvious rustling sounds caught my attention – sadly not the rabbit, but happily a recently emerged from hibernation hedgehog. 13/04/12. The flash still isn’t working!