Gardening, especially down here, is very like my previous existence as a small animal veterinary surgeon. Hardly a week goes by even after all these years, when you don’t see something new. Or a significant variation on something seen previously.

Buddleia ‘Adonis Blue’ and Clematis ‘Star of India’ 31/07/11, a new combination in the shrubbery

The last week has coincided with a summer holiday visit from our son’s family, and 2 very keen young helpers delighted to enjoy the space and fresh air of rural Wales. Apart from cutting sweet peas, picking and podding broad beans and spreading yet more gravel onto our yards, I had an idea for using all the saved Welsh poppy-seed which I’ve been collecting over the last couple of months.

I love the bright clear yellow blooms, but have a strange lack of appreciation for their orange variants, so rip them out wherever I see them, though I suspect that this is a losing battle that I shall fight for years before giving up and letting them be. However the revelation of our top field’s native floral variety this year, in the absence of sheep grazing, including the now flowering Broad-leaved Helleborine shown below gave me the idea of trying to produce a field studded with Welsh Poppies.

As an ex amateur grower of exotic orchids, it was a huge thrill to find the Broad-leaved Helleborine appear in our field this year. The small flowers look like mini versions of Cymbidiums, which I used to grow in a greenhouse years ago. 31/07/11

Of course I’ve no idea how successful it will be, and it will take at least 2 years to find out, but the other morning as warm hazy sun struggled to burn off the dew, like the Grand Old Duke Of York, I marched Dan and Ella to the top of the hill and back again. Along the way, in what I hoped would be a suitably random route, we paused every few steps, all took a pinch of the fine gritty seed and threw it across the grass. Thousands of seeds, and I guess that only a fraction will survive but if they do, in time, pools of early yellow flowers may grace the hillside. And its rather appropriate since the Welsh Poppy is one of the flowers we’ve sponsored for DNA barcoding through the scheme run by the National Botanic Garden of Wales, that I’ve mentioned previously.

It was also hugely exciting to share my first ever home-grown tomato with them last week, which also coincided with our first apple, from the ‘George Cave’ tree. This is about 2 weeks earlier than previously, but I’ll save more apple talk for another blog. 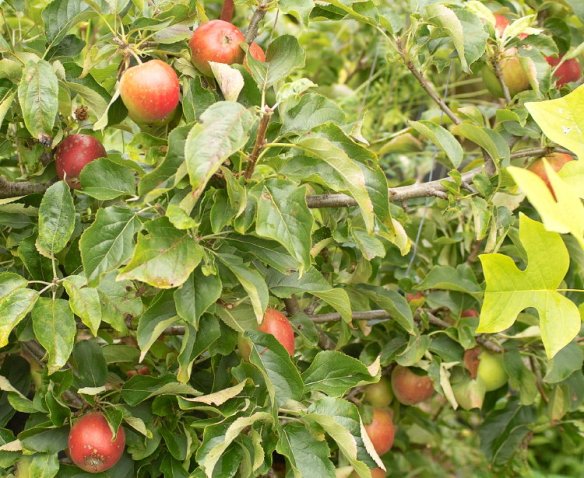 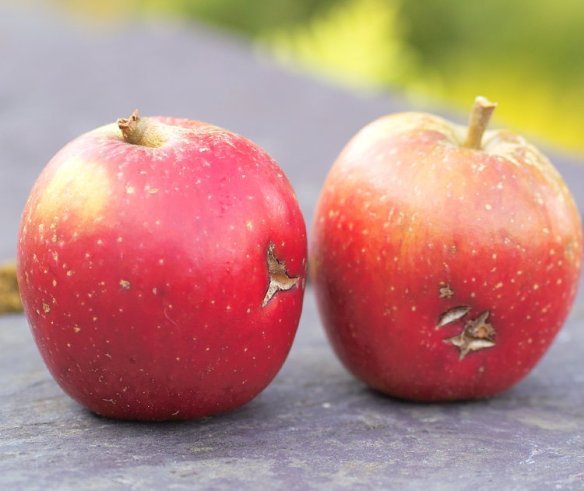 The first George Cave apples. They always seem to fall from the tree before they are quite ripe (they still have white, not brown seeds at this point), but have a good flavour and colour, particularly this year. Growing them organically at 800 feet, and with 70 inches of annual rainfall means you don’t get blemish free fruit, but of the 50 or so varieties that we grow, this is definitely one of the more worthwhile, since its early, is reasonably vigorous, fairly prolific, and fairly disease free with our regime of regular seaweed foliar spraying. 27/07/11

The vast majority are now grown hydroponically in glasshouses. Many are grafted plants, and most will use artificially introduced bumblebee pollinator colonies to aid fruit set. Of course growing them hydroponically means that they are ‘fed’ a solution which optimizes growth and fruiting, but perhaps not final flavour -How can a solution mimic the subtlety of growing in soil with its myriad nutrients, fungi and bacteria? The final shock was to discover that in the 1960’s a mutant variety was discovered at Cornell University which lacked the normal ability for natural fruit ripening. The tomatoes stayed green. But what might seem like a disaster was seized on by the commercial growers and supermarkets as a huge opportunity – pick your tomatoes green and then ship them to a central warehouse where you expose them to artificially generated ethylene gas, (you can google ethylene genrators to see what these machines look like and do)  and then whizz them out onto the supermarket shelves, since it is ethylene gas which triggers the chain of biochemical changes in the fruit which alter it from green to red/orange /yellow or purple. Sadly however, flavour doesn’t seem to develop once the tomato is picked from the plant, so this whole artificially tweaked system of growing tomatoes explains the often poor flavour in bought tomatoes.

So back to basics, and thinking about where tomatoes originated from the hills of Central America and the Spanish explorers who took them back to Europe, where the French called the fruit Pomme D’amour (apple of Love). Possibly because they thought that the tomato had aphrodisiac effects, or maybe as a corruption of ‘apple of the Moors’. But clearly from where they originated, heat is a key requirement for successful growth, since a tomato fruit will not ripen once average temperatures fall below 60 degrees Fahrenheit, and it takes about 2 months from when a fruit is set to when it ripens. During this time the tomato is growing in size, the seeds are being formed, and then the gel which surrounds them, and finally ripening with flavour and colour changes to make the fruit more appealing and hence ensure that it is eaten and the seeds dispersed to enable the species  to survive. As tomato consumers we’ve sadly become much less fussy about what a tomato tastes like – year round availability and colourful blemish free fruit are the name of the game for supermarkets.

For all of these reasons, choosing varieties which grow faster and flower earlier is important for someone like me in wet West Wales to get an early crop, as is starting the seeds off sufficiently early in the year. On this I failed miserably this year, partly since 2 packets of very expensive T and M seed of 2 of the 3 varieties I’d selected, ended up containing only 2 and 4 seeds respectively (rather than the miserly 6 seeds advertised). Although the packets were replaced, I lost critical time. So next year the plan is to start them earlier, and use my Moth Light as an additional light heat source in February/early March  to get then off to a good start. But I also read numerous forums with advice on how to ripen tomatoes which were staying green on the plants through into August. So with a few fruit starting to fill nicely on the earlier bush Maskotka varieties, I thought I’d experiment with hanging out a couple of banana skins between the bushes to see if it would aid ripening (ripe banana skins are a good source of naturally produced ethylene gas) …… 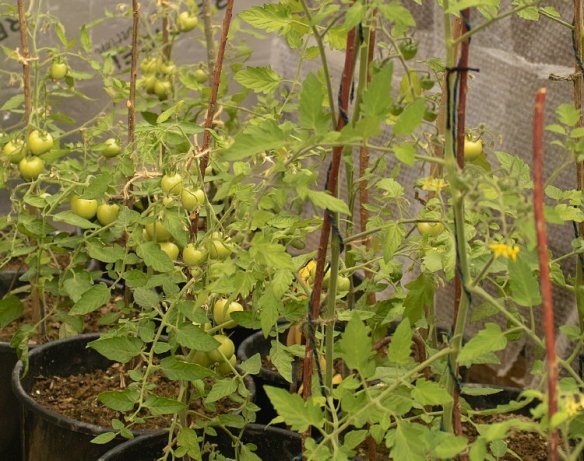 15/07/11. If you look carefully you can see one of 2 banana skins hung over a metal hook between the ‘Maskotka ‘ plants. No more fruit have formed on these half a dozen plants

Did it work? Well I’ve certainly already eaten a few Maskotkas and even a few Sungold, but what I didn’t take into account was that ethylene has a number of other effects as a plant hormone at various stages of plant and flower development, and almost as soon as the banana skins were in position, the half a dozen plants closest to them stopped setting new fruit – in spite of my pollination efforts. I’m pretty convinced that this was the result of ethylene from the banana skins,  since ethylene gas is about the same weight as air, and the skins were placed at low bush height. The taller varieties haven’t been affected in the same way, and nor have some ‘Maskotka’ plants at the other end of the greenhouse. So I may have traded a lower crop, for an earlier one on these plants. Next year, I’ll be a bit more selective with where I put the banana skins, and maybe even use a simple plastic screen to limit spread of the ethylene gas.

But the big question was, what did the tomatoes taste like? Really sweet, and full of flavour. Possibly the best tasting tomato I’ve eaten ( perhaps I’m a bit biased I guess) but I should add that I didn’t eat fresh tomatoes for many years, and this week’s home grown fruit bore little resemblance to the bland flavour, particularly the lack of sweetness, in bought varieties. 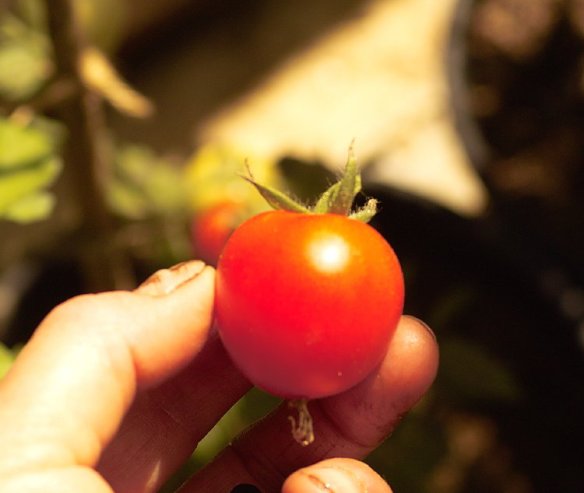 So a resounding success, and almost worth waiting all these years for! I should add that the plants were grown in 15 litre pots set into border soil, the pots filled with soil and leaf mould, and fed either weekly weak seaweed extract solution or weekly wood ash mixed into the watering can, the water being stored overnight in containers to warm up, and watering carefully to avoid wetting the foliage. I also reckon that adjusting ventilation in the greenhouse to control humidity levels in this very damp part of the country seems to be important for keeping healthy foliage on the plants through the growing season, as well as picking off any leaves which are showing signs of blotchiness or yellowing.

An unpleasant surprise the other morning as I took out some bread from the freezer in the barn, which has been used for years as the main nesting site for many pairs of swallows. I heard large wing beats as I walked in, and looked up to see the unmistakable barred chest of a Sparrow Hawk, flying up and down and looking for a way out. In the end it escaped under the eaves (no fascia boards in place here). But the swallows were understandably quiet and largely absent all day. And who would feel secure returning to a barn after a predator like that had flown in?

As the first Buddleia flowers have opened, the first Comma of the year emerged to visit them, and 2 days ago the very pretty flowers of Rosa ‘Mermaid’ which we planted last year after seeing it growing up the walls of a National Trust property in Wiltshire. The foliage is looking very healthy, and although it was knocked back a bit by the very hard winter, it’s an advantage to have another climbing rose that’s starting to flower as our others are coming to an end for the year.

The first Comma of the year 30/07/11, in a year which so far has been very poor for butterflies up here, after the Orange-tips of spring.

And finally last week saw an annual event which lasts barely a few hours. The wall of the barn was covered in winged swarming ants, the trigger for swarming being a day of very warm, humid weather. Thousands climbed the walls and the gravel at its base in a mating frenzy. Yet another novelty for our visiting grandchildren to witness. The following day, they had all disappeared. Googling swarming ants leads me to think that they are the swarms are of the common Black ant, Lasius niger. The Queen and males grow wings specifically for this event, and once over, the ants chew the wings off to continue the rest of their existence on, or below ground.

Our Garden at Gelli opens by appointment most of the year for charity under the N.G.S. Please see our website for contact details www.thegardenimpressionists.co.uk